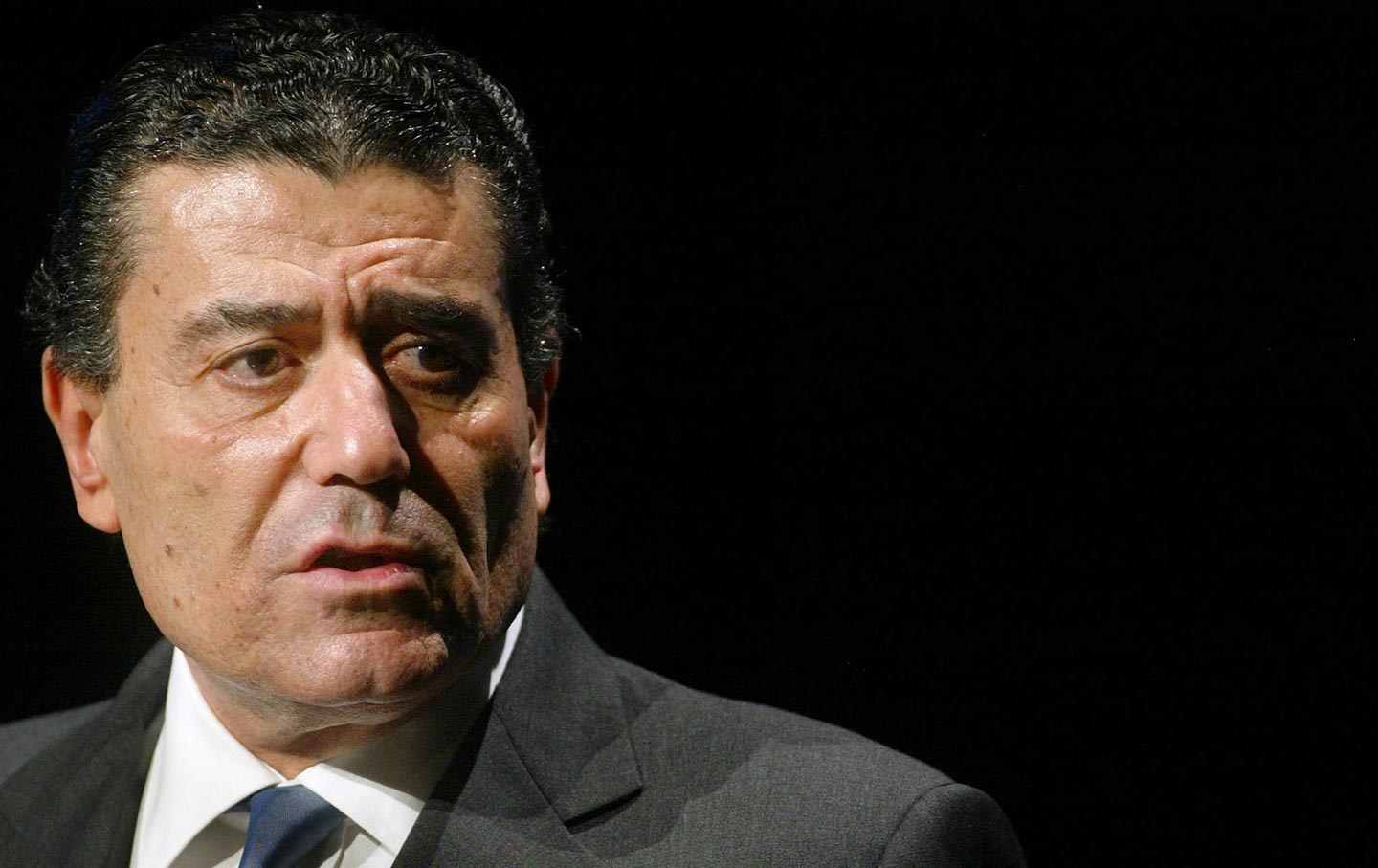 Hillary Clinton’s Muslim problem isn’t actually her own Muslim problem. She’s spoken eloquently, several times now, about tolerance for Muslims. “Islam is not our adversary. Muslims are peaceful and tolerant people and have nothing whatsoever to do with terrorism,” she said this week at the Council on Foreign Relations. “The obsession in some quarters with a clash of civilizations or repeating the specific words ‘radical Islamic terrorism’ isn’t just a distraction. It gives these criminals, these murderers, more standing than they deserve. It actually plays into their hands by alienating partners we need by our side.”

On the issue of Syrian refugees, where the right’s bigotry has been most starkly on display, Clinton was just as unequivocal: “We cannot allow terrorists to intimidate us into abandoning our values and our humanitarian obligations. Turning away orphans, applying a religious test, discriminating against Muslims, slamming the door on every Syrian refugee—that is just not who we are.”

“Muslims are peaceful and tolerant people and have nothing whatsoever to do with terrorism.” — Hillary Clinton

With these and other points, in this and other fora, Clinton took a firm stand against Islamophobia. That’s why her Muslim problem is not her own. It stems, instead, from those most bedeviling of problems: her friends. One was the mayor of little Roanoke, Virginia, who released a statement citing the internment of Japanese-Americans during World War II as part of his opposition to housing Syrian refugees. The mayor, David Bowers, sat on the Clinton campaign’s Virginia Leadership Council. Before the day he made his comments was out, so was he.

It will be more difficult for Clinton to distance herself from another friend, Haim Saban, who spent last Thursday trying to claw out of the hole he dug: Saban happens to be Clinton and her husband’s top political patron. An Israeli-American businessman, he came into billions of dollars in the entertainment business. According to The Washington Post, Saban and his wife have poured more than $2 million into Hillary Clinton’s presidential coffers; he has vowed to spend “as much as needed” to see her installed in the White House.

So it must’ve been with some apprehension that the Clinton camp watched as Saban contradicted all the basic tenets of what Clinton laid out in her remarks. In an interview with the Hollywood industry site the Wrap published on the same day as Clinton’s CFR speech, Saban said (with my emphasis):

Many members of the Hollywood community are very liberal and they value their civil liberties more than they value life. I disagree with that. You want to be free and dead? I’d rather be not free and alive. The reality is that certain things that are unacceptable in times of peace—such as profiling, listening in on anyone and everybody who looks suspicious, or interviewing Muslims in a more intense way than interviewing Christian refugees—is all acceptable [during war]. Why? Because we value life more than our civil liberties and it’s temporary until the problem goes away.

But to say this is shameful—I disagree. … I’m not suggesting we put Muslims through some kind of a torture room to get them to admit that they are or they’re not terrorists. But I am saying we should have more scrutiny.

“You want to be free and dead? I’d rather be not free and alive.” — Haim Saban

Instead of garnering a swift rebuke from the Clinton camp, as did Bowers, Saban ended up releasing a statement, published by the Washington Post, gently walking back his comments. “I misspoke. I believe that all refugees coming from Syria—a war-torn country that ISIS calls home—regardless of religion require additional scrutiny before entering the United States,” Saban told the paper. “I regret making a religious distinction as opposed to a geographical one: it’s about scrutinizing every single individual coming from a country with ISIS strongholds.”

That’s a walk back, all right. But I’m not buying. First, look at the breadth of Saban’s opening paragraph. It’s not just about the “religious distinction” for refugees: It’s about civil liberties at home—something refugees, who must apply and be accepted before they arrive here, do not enjoy. Of Saban’s list of things that are “acceptable” in times of war, only one (“interviewing Muslims in a more intense way”) refers to refugees. The rest are more general positions and would apply to broader policy making. One is left wondering what Hillary Clinton thinks of these positions. Does she believe in profiling? (It’s worth noting that Saban’s notion of “temporary” limits on civil liberties during a time of war is meaningless when we’re waging an endless war.)

Second, Saban, without naming him, cites Obama—whom Saban has never really supported—saying that the policies put forward are “shameful.” Obama’s use of that word was in precise reference to the religious test for refugees. Here’s the full quote from Obama:

When I hear folks say that, well, maybe we should just admit the Christians but not the Muslims, when I hear political leaders suggesting that there would be a religious test for which person who’s fleeing from a war-torn country is admitted, when some of those folks themselves come from families who benefited from protection when they were fleeing political persecution, that’s shameful.

Forgive my skepticism over whether Saban “misspoke” when he came out in favor of the religious test for refugees and took a shot the very same word that Obama used—a word that, by this time, had been burned into the national discourse on this topic in specific reference to that religious test. It seems abundantly clear that Saban meant what he said, and walked it back in coordination with the campaign—which sent The Washington Post not a new statement but a reiteration of her remarks at the exact same time Saban sent over his statement—only when some political heat began to come down.

Haim Saban is firmly in the right-leaning camp of Israel supporters.

Saban is, of course, aligned with the Democratic Party, to which he is a major donor. But on matters of the Middle East, he is firmly in the right-leaning camp of Israel supporters—exactly the milieu among whom the sort of Islamophobia Clinton and Obama have been busy denouncing has for too long gone unchecked. Saban has even been known to try, at least, to play nice with Sheldon “Nuke Iran” Adleson, the bigoted far-right GOP megadonor and patron of Israel’s hawkish Likud Party. At one joint event with the two men in 2014, Saban said that if he was running Israel and the Iran nuclear deal was unsatisfactory to the Jewish state, he “would bomb the living daylights out of these sons of bitches.”

As nuclear negotiations reached the homestretch, Saban suggested he had insider knowledge that Clinton opposed it. When the deal did finally come, Clinton endorsed it, but Saban denounced it. He called the accord a “bad deal” and said “we need to fight against” it—comments that, like last week’s remarks on refugees, Saban quickly sought to walk back (though his clarification was a bit incoherent).

Clinton, despite the break with Saban on the Iran nuke deal, has shown a willingness to make his priorities her own. In July, Clinton sent a subsequently leaked personal note to Saban vowing to fight against the movement to boycott, divest from, and sanction Israel. She appended a handwritten postscript that said, “Look forward to working with you on this.”

No one should expect Clinton to jettison Saban as she did Bowers—for one, Saban’s rhetoric reached nowhere close to the level of Bowers’s—but it’s worth keeping an eye on his views, access, and influence as the campaign moves forward, especially if Clinton wins the Democratic nomination and, most importantly, goes on to the White House.