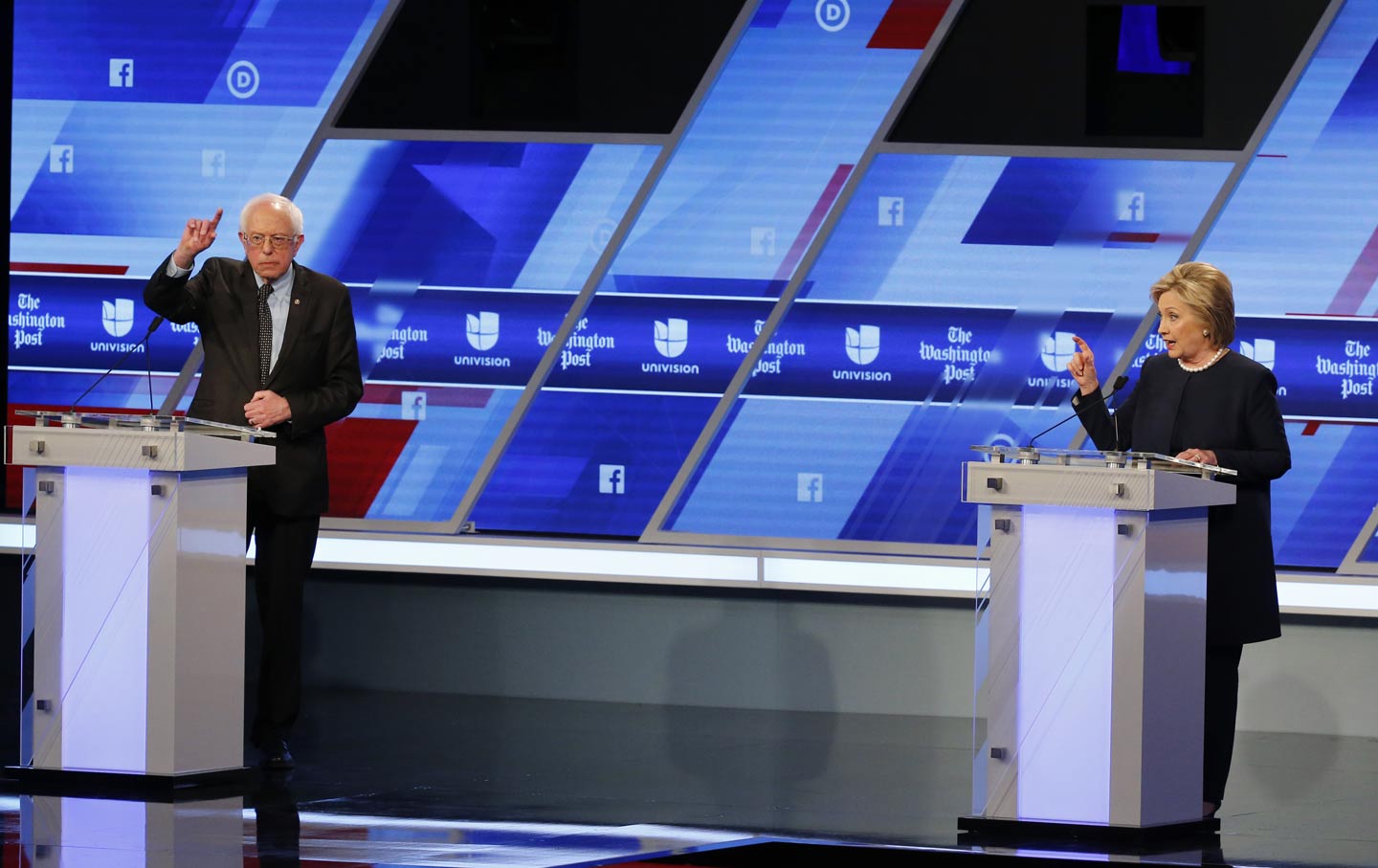 Univision anchor Jorge Ramos got what he came for at Wednesday night’s Democratic debate. After aggressive questioning, Ramos compelled both Hillary Clinton and Bernie Sanders to pledge not to deport children if either is elected president. The candidates made news with this stunning campaign commitment, that’s for sure.

Ramos won their promises because the Univision and Washington Post–hosted debate went further and deeper on the issue of immigration than prior debates or town halls (with the exception of MSNBC’s town hall in February), and because of Ramos’s unapologetic approach to advocacy journalism, particularly on the issue of immigration. But I worry that the legendary Ramos, sometimes referred to as the “Hispanic Walter Cronkite” or the “Mexican Anderson Cooper” (what with their shared silver fox look and all), missed finer details on his march to achieving these promises.

Are we as media consumers so hungry for change that we’ll take aspirational talk over the slog of political reality?

Ramos’s single-minded focus to extract a commitment from Clinton in particular kept him from homing in on what Hillary Clinton was truly saying on Wednesday night—which is that she considers undocumented immigrants and child migrants who have fled Central America seeking asylum to be two distinct groups. She may have pledged that as president she would not to deport children, but she didn’t promise that every one of the tens of thousands of children who have arrived in the United States to escape rampant violence in El Salvador, Guatemala, and Honduras in recent years would be allowed to stay.

This is how it went down:

RAMOS: And can you promise that you won’t deport immigrants who don’t have a criminal record?

CLINTON: Here’s what I can promise, Jorge; I can promise that I will do everything possible to provide due process.

RAMOS: But will you deport children?

CLINTON: Let me say this. I would give every person, but particularly children, due process to have their story told. And a lot of children will, of course, have very legitimate stories under our law to be able to stay.

They went back and forth a few more times, and Clinton spoke at length about the distinction she makes between deporting undocumented immigrants who are here and those who have arrived, especially in recent years due to the child migrant crisis, seeking asylum.

CLINTON: Yes, you can because the question you were asking me were about children seeking asylum. And we have laws. That was the most critical thing I said. Under our laws. I would like to see those laws changed. I would like see added to them, a guaranteed counsel and other support for children.

CLINTON: But if you are asking about everyone who is already here, undocumented immigrants, the 11-12 million who are living here, my priorities are to deport violent criminals, terrorists, and anyone who threatens our safety. So I do not have the same policy as the current administration does. I think it’s important that we move to our comprehensive immigration reform, but at the same time, stop the raids, stop the roundups, stop the deporting of people who are living here doing their lives, doing their jobs, and that’s my priority.

Ramos went at it one more time. “But again, yes or no, can you promise tonight that you won’t deport children who are already here?” Clinton said, finally, “I will not deport children. I will not deport children.” But she made sure to reiterate that asylum seekers, who are allowed to come to the United States but must petition an immigration judge to stay in the United States and be granted humanitarian relief, are subject to their own legal process. Clinton wants to make sure that those asylum seekers, which is to say, the very children she’s been pilloried for wanting to deport, have the opportunity for their cases to be heard. But she’s not pledging to allow all asylum seekers to stay. However, Ramos missed this, or interpreted her specificity and lack of a direct answer for evasiveness. She wasn’t necessarily being evasive, but neither was she actually committing to never deport children.

When it was Sanders’s turn to answer, he got in a shot at Clinton—referring again to her 2014 remarks when she called for child migrants to “be sent back” to Central America, and then he answered follow-up quickly and unequivocally to say that he, too, would not deport children. But I don’t necessarily think it’s because he has more political integrity than Clinton. He just didn’t bother with specifics the way that Clinton did.

And, it should be noted, President Obama’s record-breaking deportations have shone a light on the injustices of immigrant detention and deportation. Immigrant-rights activists have been calling for a moratorium on deportations for years, arguing that in the absence of immigration reform, deportations also ought to stop. Clinton’s and Sanders’s Wednesday night promises are a landmark commitment, yes, but it’s not so surprising that such a demand has filtered up to the presidential campaigns.

Now, it’s fair to accuse Clinton of gingerly weaving around the issue with lawyerly sophistication. She’s a politician, she’s only a disingenuous friend to immigrants—you’ve heard it all before. But in this case in particular, I don’t mind that Clinton watched her words so carefully. Anyone who’s paid attention to the immigration debate of the last half decade knows that President Obama is still paying for the campaign promise he made to get immigration reform passed. Immigrants, activists, advocates are still bruised from years of hopeful waiting, which turned to watching in horror as Obama used ramped-up enforcement as a bargaining chip for comprehensive immigration reform that Congress never got around to passing.

That’s not to say that Clinton or Sanders, as president, couldn’t direct their Department of Homeland Security secretaries to issue enforcement memos that de-prioritize the deportation of children and those who have no criminal record. Except President Obama’s secretaries of homeland security have issued these very memos (for those without criminal records in particular), and, still, enforcement regularly sweeps up undocumented immigrants who have never been convicted of crimes.

This also isn’t the first time Clinton’s relented on the issue of immigration. At MSNBC’s town hall in February, host Jose Diaz-Balart deftly maneuvered to press Clinton on whether or not she’d introduce immigration reform legislation in her first 100 days in office. She’d started off with a generic promise: “I will immediately begin working on priority legislation that I want Congress to deal with right away, and immigration reform will be among those issues,” Clinton said at the start. By the time Diaz-Balart got done with her, pressing her repeatedly on her timeline, she’d reiterated that immigration was priority legislation, and then finally said, “Yes, yes, I’m going to introduce my priority legislation, and this is at the top of that list.”

What does Clinton win by holding out? Very little in the short term, she’s probably wagered. But the long-term costs are significant.

When I talked to immigrant voters in Las Vegas ahead of the Nevada caucuses, more than a handful said that they were disillusioned with voting after supporting President Obama for two terms and then waiting for relief that, when it finally came in the form of his executive actions, was narrow, short-term, and revocable. Back in November, when I spoke with Lorella Praeli, a formerly undocumented immigrant activist and Clinton’s own director of Latino outreach, she acknowledged this very sentiment directly affected her efforts to get Latinos out to vote for her candidate. “People ask why? Why is [immigration reform] going to happen now?” Praeli told me at the time. “In some places, some people were disillusioned with regards to immigration.”

Latinos “are more plugged in and also more sophisticated when it comes to politics,” Praeli told me at the time. “And in some places a little more hesitant.”

That Clinton relented both times is especially notable because, as of late, she’s taken to attacking Sanders for irresponsibly making pie in the sky promises to voters. “If the numbers don’t add up, it’s wrong to make those promises,” Clinton said last month, after defeating Sanders in the Nevada caucuses. “Because it’s not just about math, it’s about people’s lives.” She was referring to healthcare, but the sentiment is certainly applicable here.

Was she wrong to relent? How much of political leadership is about laying out a progressive agenda voters want to hear, and then picking up the pieces to figure out how to deliver after the fact, congressional stalemates be damned? Are we as media consumers and political watchers so hungry for change that we’ll take aspirational talk over having to slog through the political reality? And perhaps more relevant to this moment, would voters prefer to be lied to? Or can they handle a candidate like Clinton who tries (though eventually relenting) to be honest about what she can and won’t deliver?

Campaign promises that don’t take into account the realities of the last seven years of congressional politics may do more harm than good, if the goal is to, at the very least, treat Americans like adults and speak plainly and honestly. I’m showing my political idealism, I realize. Very rarely is the goal to speak honestly and plainly to the people whose vote a politician is trying to win. But politicians have a more self-serving interest in being straight with voters: to stave off the kind of bone-deep disenchantment that makes Americans resent their political leaders, and turn to outsider alternatives, or give up on civic engagement altogether.

Praeli told me that she learned this lesson as an activist long before joining the world of political campaigns. “My grandfather’s really old,” Praeli said. “We lost my grandmother two years ago, and I told my mom, ‘Mom, you’re going to see grandma because we’ll pass comprehensive immigration reform.’”

“And I learned, I’m never going to make that promise because you can’t keep it,” she said. Praeli’s mom, who couldn’t leave the country because she’s undocumented, had to watch her own mother’s funeral over an iPad.

The Dustbin of History