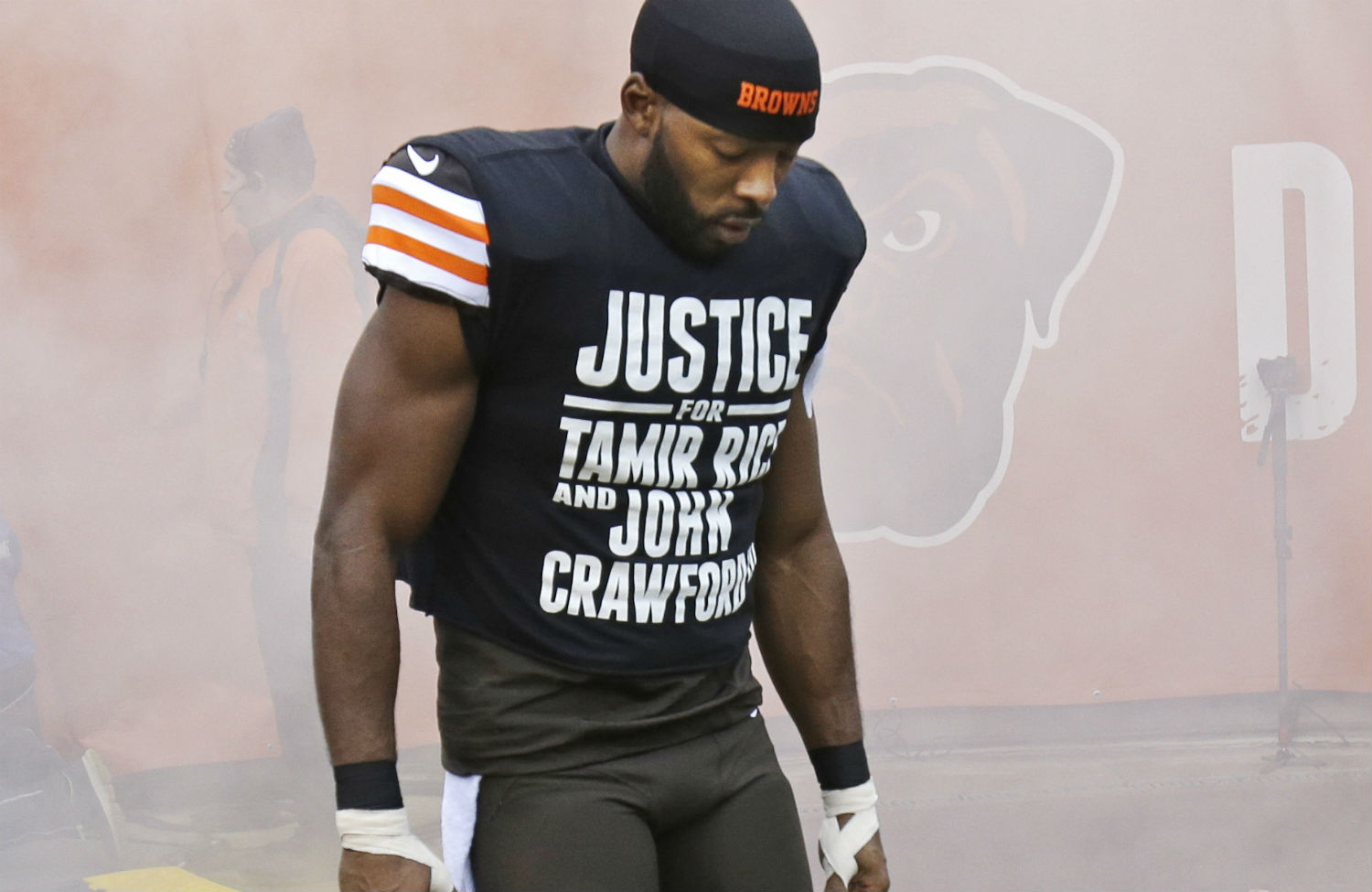 One common thread that binds all social movements is the rise of the “accidental activist.” These are people who preface what they say with statements like, “I’m not an activist, in any way, shape or form.” And then they proceed to unleash statements of profound impact or find the courage to lead movements, discovering within themselves the capacity to inspire. We are seeing this in cities around the country in the #blacklivesmatter movements as a new generation of leaders is fighting for the space to actually lead.

We also saw it this week in a six-minute speech, delivered without notes, by Cleveland Browns wide receiver Andrew Hawkins. Hawkins was under pressure from the Cleveland police union to apologize for wearing a shirt in pregame saying “Justice for Tamir Rice and John Crawford”.Tamir Rice was killed by Cleveland police and John Crawford nearby Beavercreek, Ohio this year. Tamir Rice was just 12 years old. Tamir had a BB gun. Crawford had picked up a pellet rifle for sale in a Walmart. Neither was brandishing his weapon. Both were gunned down within seconds of being approached by police. Andrew Hawkins, seeing the I Can’t Breathe shirts worn by athletes in pregame preparations around the country, decided to make it very personal and very local. He was morally compelled to whack the hornets’ nest that is the Cleveland police union, knowing he would get stung.

Sure enough, the union’s president, who hasn’t said a word condemning the killings of Tamir and Crawford, called Hawkins “pathetic” and ignorant and demanded an apology. On Monday, Hawkins refused to apologize. On Tuesday, he appeared before the press and spoke. Yes, he said, “I’m not an activist, in any way, shape or form.” It reminds of the young Muhammad Ali who early in his boxing career said, “I don’t join marches and I won’t hold a sign” and then said one whole hell of a lot more.

As you will see, Andrew Hawkins also said, “Ninety-nine times out of a hundred I keep my opinions to myself on most matters.” For all our sake, we should be grateful that this was the hundredth time. Thank you Andrew Hawkins. Thank you for standing up to the police union’s bullying tactics. Thank you for getting over your admitted fear of speaking out. Thank you for speaking about your son Austin, saying, “The number-one reason for me wearing the T-shirt was the thought of what happened to Tamir Rice happening to my little Austin scares the living hell out of me. And my heart was broken for the parents of Tamir and John Crawford knowing they had to live that nightmare of a reality.” Thank you. You made Tamir Rice and John Crawford visible for many fans who have chosen not to see the tragedy of their deaths and the enraging horror of how they died.

And lastly, thank you Tony Grossi of ESPN Cleveland for transcribing the below. Please read all of his words. When people find their voice, they tend to say things that far outstrip those who haven’t stopped talking for years.

“To clarify, I utterly respect and appreciate every police officer that protects and serves all of us with honesty, integrity and the right way. And I don’t think those kind of officers should be offended by what I did. My mom taught me my entire life to respect law enforcement. I have family, close friends that are incredible police officers and I tell them all the time how they are much braver than me for it. So my wearing a T-shirt wasn’t a stance against every police officer or every police department. My wearing the T-shirt was a stance against wrong individuals doing the wrong thing for the wrong reasons to innocent people.

“Being a police officer takes bravery. And I understand that they’re put in difficult positions and have to make those snap decisions. As a football player, I know a little bit about snap decisions, obviously on an extremely lesser and non-comparative scale, because when a police officer makes a snap decision, it’s literally a matter of life and death. That’s hard a situation to be in. But if the wrong decision is made, based on preconceived notions or the wrong motives, I believe there should be consequence. Because without consequence, naturally the magnitude of the snap decisions is lessened, whether consciously or unconsciously.

“I’m not an activist, in any way, shape or form. Ninety-nine times out of a hundred I keep my opinions to myself on most matters. I worked extremely hard to build and keep my reputation especially here in Ohio, and by most accounts I’ve done a solid job of decently building a good name. Before I made the decision to wear the T-shirt, I understood I was putting that reputation in jeopardy to some of those people who wouldn’t necessarily agree with my perspective. I understood there was going to be backlash, and that scared me, honestly. But deep down I felt like it was the right thing to do. If I was to run away from what I felt in my soul was the right thing to do, that would make me a coward, and I can’t live with that. God wouldn’t be able to put me where I am today, as far as I’ve come in life, if I was a coward.

“As you well know, and it’s well documented, I have a 2-year-old little boy. The same 2-year-old little boy that everyone said was cute when I jokingly threw him out of the house earlier this year. That little boy is my entire world. And the number-one reason for me wearing the T-shirt was the thought of what happened to Tamir Rice happening to my little Austin scares the living hell out of me. And my heart was broken for the parents of Tamir and John Crawford knowing they had to live that nightmare of a reality.

“So, like I said, I made the conscious decision to wear the T-shirt. I felt like my heart was in the right place. I’m at peace with it and those that disagree with me, this is America, everyone has the right to their first amendment rights. Those who support me, I appreciate your support. But at the same time, support the causes and the people and the injustices that you feel strongly about. Stand up for them. Speak up for them. No matter what it is because that’s what America’s about and that’s what this country was founded on.”