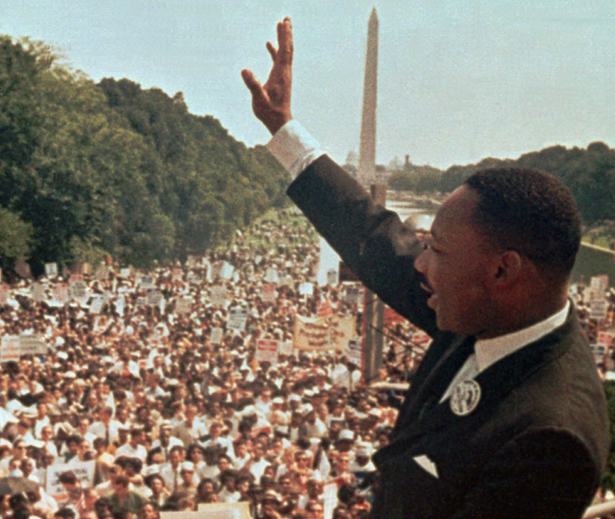 In this August 28, 1963 file photo, Dr. Martin Luther King Jr. acknowledges the crowd at the Lincoln Memorial for his “I Have a Dream” speech during the March on Washington. (AP Photo/File)

Back in August, some observers drew comparisons between the shooting of Michael Brown by Darren Wilson in Ferguson, Missouri, and the 1955 murder of Emmett Till. If parallels to civil rights movement history are helpful now, then let yesterday’s announcement that a Staten Island grand jury won’t indict the police officer who choked Eric Garner to death be a sign that we’re somewhere closer to 1963—when a series of devastating setbacks and subsequent widespread outrage transformed the civil rights struggle—than we are to Till’s lynching, that earlier consciousness-raising moment. There was a perfect storm this week: the continuing fallout of the failed indictment of Wilson; the news of the outcome in the Garner case; a Cleveland newspaper’s efforts to discredit and sling mud on the parents of a 12-year-old boy killed by police. This moment has the potential to catapult change, just as a series of events that transpired eight years after Till was killed did.

The murder of 14-year-old Till and the 1963 murder of four black girls at Birmingham’s Sixteenth Street Baptist Church both became national stories that hit Americans square in the chest, reminding them of the Jim Crow system of justice in which black people had no rights that whites were bound to respect. With the killings of Garner, Brown, Akai Gurley, Tamir Rice and others, we are all reminded that black life is still too often devalued, and that police officers are often not subject to the rule of law. That reminder has packed a similar emotional wallop. It is all coming so quickly: these announcements that a trial isn’t even needed to determine the police officer’s guilt or innocence. These exonerations through other means. People are taking to the streets nationwide to protest: just last night saw an outpouring of response in New York City, Los Angeles, Atlanta and beyond.

But one problem, as my colleague Zoë Carpenter noted yesterday, is that some who are protesting are wondering how to turn these coordinated actions into a movement. From a DC community townhall meeting, Carpenter reports:

[Eugene] Puryear noted that the gap between protest and large-term organizing still has to be bridged. “Right now, just to be honest, we have tactics—we do not have strategy. We are doing a lot of interesting things and a lot of important things…but ultimately, where is it going? What are we doing? What are we really asking for?” he asked. “We’re ready to get arrested, and I love that. I’m ready. But are we ready to build institutions?”

These are critical questions. During the first four years of the Obama administration, I worked at a social justice organization that uses online organizing tactics to engage people in civil rights and racial justice campaigns. The work was and continues to be important and often successful, but far too often, it felt like we were responding to news events rather than setting the agenda. Someone would say something nauseatingly racist about the president, and we would respond. A law would be at risk of being stripped of a key provision, and we would try to pressure responsible parties. But the questions I kept coming back to were: When do we craft and push for the next Civil Rights Act? The next Voting Rights Act? How do we keep playing this necessary defense—while also going hard on offense? How do we identify the deep, structural problems, if only one at a time, and devise plans to solve them? In other words, when do we start to think big like the A. Philip Randolphs, Bayard Rustins, Ella Bakers and other brilliant strategists of yesteryear?

The group of young organizers who have been active in Ferguson and who earlier this week met with President Obama and members his administration are starting to answer these questions. Among the demands put forth by activists from organizations including Millennial Activists United, Ohio Students Association, Dream Defenders, Make the Road New York are for:

These demands take a step toward vision and big thinking—a commitment to playing offense and addressing the problems at their roots—that we need right now. If we take history as our guide, it’s worth noting that public outcry in response to the rapid fire events of 1963 is credited with making the passage of the 1964 Civil Rights Act inevitable. The four little girls were killed in September of that year in a place already dubbed “Bombingham” for the level of racist backlash to the small steps toward progress the city was making. King had been jailed there in the spring of that year. Medgar Evers had been assassinated that summer in Mississippi. The March on Washington for Jobs and Freedom had happened not even a month before the church bombing, and had shown the world that a critical mass of people were mobilized in the service of fundamental change.

Granted, those dead at the hands of police today are not civil rights leaders, or children killed in their place of worship. For some observers, these more recent victims are unsympathetic: they were involved in roughing up a bodega owner or selling untaxed cigarettes. But for others, we find ourselves at a similar moment fifty years after that critical turning point in civil rights movement history—with “Again?” on our lips and a familiar feeling of dread in response to the violence we witness on the video of the killing of Eric Garner, the incredible amount of force used on a man who announced over and over again, “I can’t breathe.”

What would it take to scrap and rebuild a system that makes it nearly impossible to indict an officer when he or she kills a civilian? What is the landmark legislation that all this fury in the streets can demand and drive? Some of the organizers and strategists who are responsible for the displays of coordinated, righteous protest are putting their minds on these questions. The sense of being up against an unchangeable justice system designed to brutalize black life at the slightest perception of provocation can make one feel that the United States has proven itself to be a failed political experiment, one in which some people’s rights will never be secured. But if the history of this country’s most revered revolutionary period is any guide—and if a policy program is developed to channel all this growing energy—then we’re just getting started.