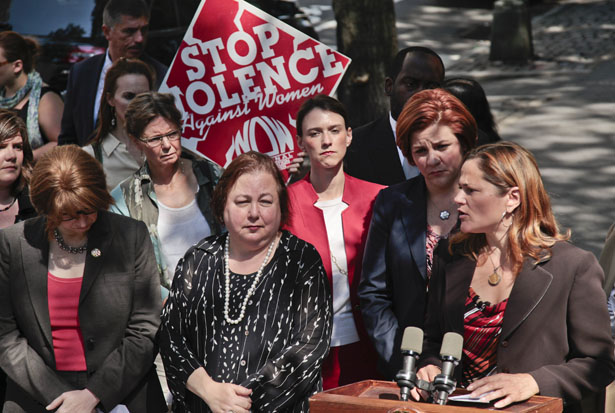 City Council member Melissa Mark-Viverito, right, speaks at a news conference as advocates in the fight against violence on women. (AP Photo)

You might see conservatives in New York City buying one-way, outbound LIRR tickets or double-barricading their doors this morning. Such is the panic in their ranks after the City Council on Wednesday elected East Harlem City Councilwoman Melissa Mark-Viverito to be its next speaker. “She’s in,” writes Andrea Peyser in the New York Post. “We’re toast.”

Mark-Viverito got the council’s unanimous support, despite an unusually public and pretty intense weeks-long battle involving her chief rival, Dan Garodnick, the county Democratic chairs, the new mayor, unions, the Council’s Progressive Caucus and an avalanche of bad press for her. Her win is seen as a major coup for Bill de Blasio, who now has a strong ally on the other side of City Hall—maybe even a stronger one than Mike Bloomberg had in Christine Quinn.

But because Mark-Viverito’s ascendance is in tandem with that of the Progressive Caucus, the way power is wielded on the east side of City Hall is subject to change.

Years before her close alliance with Bloomberg was the focus of campaign-trail complaints, Quinn’s use of the speaker’s levers of power drew grumbling from other councilmembers. The ruthless use of discretionary funds (the money members are allowed to dole out in their districts) and leadership positions to reward supporters and punish dissenters, the refusal to bring measures with overwhelming support up for council votes, the blocking of mere hearings for bills she didn’t like—even her control of the lawyers who turned policy ideas into legislative language for councilmembers—were seen as anti-democratic. And the same was said of previous council leaders.

Thus, one of the many planks of the Progressive Caucus’s agenda calls to scale back at least some of those speaker powers. It seeks to “reform the New York City Council rules,” namely to

—Take the politics out of “Member Items” by giving all members an equal amount or amounts determined by need-based formulas and insisting on full transparency.

—Ensure timely consideration of legislation or oversight supported by a majority of Council Members.…

—Dramatically expand participation by New Yorkers in government processes through innovative tools such as participatory budgeting and new technologies to integrate customer service, data for City decision-making, and meaningful and inclusive public input.

—Implement recommendations from the Campaign for Community-Based Planning to achieve a better balance of comprehensive and community-based planning, empower and reform community boards, and more genuinely engage communities in the planning process.

(The latter two points aren’t tied to changes in the speaker’s power but could change the way the council wields some of its budget and land-use powers.)

If the caucus makes good on these reforms, Mark-Viverito will still have plenty of authority. But keeping the council in line behind the mayor’s agenda, or her own, or some combination of the two, will be harder for her than it was for Quinn or her predecessors. That’s especially true if the rift over her own election as speaker creates a rival caucus of those who supported Garodnick or are otherwise uncomfortable with Mark-Viverito’s platform, as some sources suggested might occur. That would be a major cultural shift for a body accustomed to unanimous or nearly unanimous “yes” votes on almost all the measures it passes.

It would also look more like real democracy, which is often sloppy and unsatisfying. This means the left in New York may have to encounter the age-old question of whether the political systems’ process or product matters more—a debate that has often divided the city’s good government groups, who focus on how the sausage gets made, and social reformers, who look more at ends than means. Wrapped up in that argument are the complex dynamics of power in New York City. If you empower the individual councilmember versus the speaker, does that weaken the council as a counter-balance to the mayor? If you strengthen the council as a counter-balance to the mayor, does that undermine New York City’s relationship with Albany, which controls—among other things—much of its taxing authority and its rent laws?

These arguments about whether there is a way to have a progressive process and still deliver progressive policy change may surface even in the push for reform. Taking second billing on yesterday’s council agenda was the naming of the members of the council’s rules committee, which will oversee any changes to the way business is done in the body. As Garodnick supporters prepared to lay down arms, some griped about the fact that all seven members nominated to the committee (including Brad Lander, who co-chairs the Progressive Caucus, as chairman) were Mark-Viverito backers.

“Brad has assured me that will not be the case going forward,” Councilman Mark Weprin, a Garodnick supporter, told City & State. “We’re all going to be working together. Kumbaya, we’re all one big happy family.”

In other news: Some may have found de Blasio’s inauguration tacky and divisive, but at least it was (relatively) cheap. According to figures reported to the Campaign Finance Board, the new mayor spent just over $1 million on his swearing-in, compared to the $2.5 million Bloomberg spent on his first inauguration, in 2001. Bloomberg’s 2005 and 2009 re-swearings cost $1.7 million and $900,000, respectively.