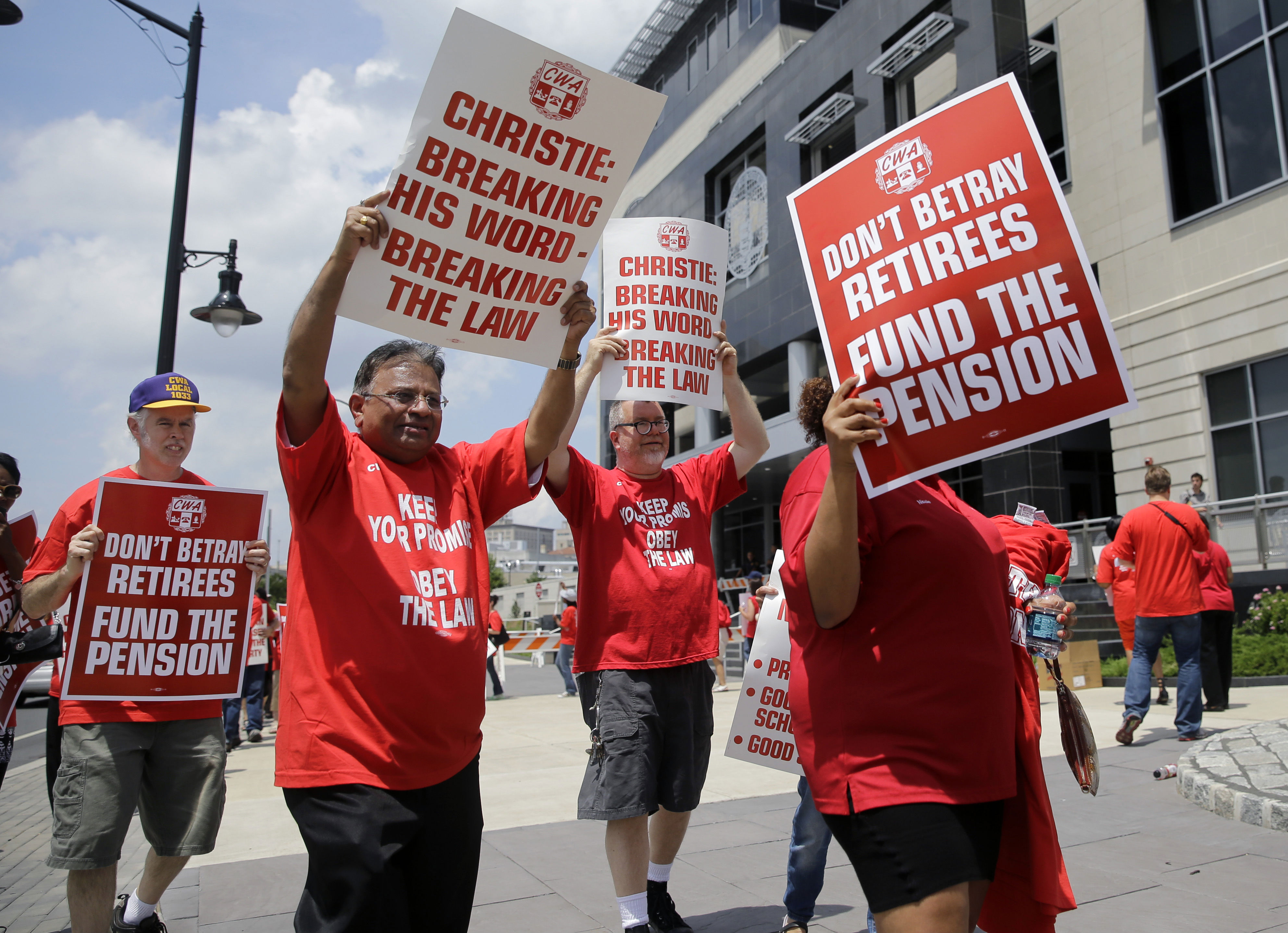 On Wednesday, Christie Watch followed the New Jersey governor to an idyllic, beachside pavilion in Belmar, New Jersey. Under crystal blue skies and amid soft, cool ocean breezes, Chris Christie held the 125th in his long-running series of town hall meetings. But you could tell that the governor’s heart wasn’t in it. Beleaguered at home, dealing with a budget crisis and a faltering New Jersey economy, engaged in a statewide confrontation with teachers, police, firefighters and other state employees over Christie’s plan to slice and dice public pensions, and still dogged by Bridgegate, there’s little doubt that the governor would like to leave New Jersey behind and get started on his 2016 presidential campaign—for which, if he decides to run, he’ll probably resign sometime next year and leave New Jersey’s problems to his successor. Indeed, today the governor is in New Hampshire, the first-in-the-nation primary state, whose feisty, independent-minded voters hold the key to Christie’s presidential future.

At Christie’s last town meeting, July 22 in Long Beach, the governor found himself facing a formidable, silent protest by 200 police and firefighters angry over’s Christie’s intent to conduct another round of pension and healthcare benefit cuts later this year. So, too, on Wednesday in Belmar Christie found himself facing a healthy contingent of protesters, mostly teachers and other state workers, among the 400 or so who showed up to see the governor. Holding signs and placards, talking to reporters, singing songs—including one specifically written for the occasion by the Solidarity Singers, a pro-union group—the protesters dominated the audience, interrupting Christie’s patter, asking tough questions during the Q&A session, and mostly dominating the event’s ambience. Riffing on Christie’s latest theme, “No Pain, No Gain,” Carol Gay, president of the Industrial Union Council of New Jersey, said, “We’re here because we don’t think our pain should be Christie’s gain.” Like many in the crowd, Gay was angry that earlier this year Christie reneged on a deal to make the full, promised payment toward New Jersey’s public pension plan’s solvency. “He’s trying to make public workers the scapegoat for his mistakes,” she said.

“He’s screwing with all of our pensions. He’s basically trying to get rid of it,” said a correction officers with eight years on the job, who asked that his name not be used. “Morale is suffering. There are guys who don’t know if they’ll be on the job in five or ten years.”

During the event, part of a series of such meetings along the Jersey Shore this summer to build support for what Christie promises will be sharp cuts later this year, a teacher in the audience asked Christie to reassure her that teachers won’t face draconian reductions. “We negotiated those benefits,” she told the governor. “We took low salaries all these years because we knew we could count on a pension when we retire.” But Christie was unmoved, during a back-and-forth exchange. Pressed to guarantee that the state would follow through on its commitments, Christie said: “I can’t.… If I were to guarantee [that], I’d be lying. The money is not there, and it will not be there.” By the end of the summer, he said, he’ll announce the outlines of his plan to deal with the problem. To make sure his audience got the point, he raised the threat of the state pension system’s going “bankrupt” and New Jersey’s ending up like Detroit.

That’s Christie’s message, not so much to New Jerseyans but to Republican primary voters, especially the ultraconservative and Tea Party types who are suspicious of Christie’s right-wing bona fides. And it might be working, at least according to some early polling, including a CNN poll this week that found Christie leading the pack among potential GOP 2016 candidates, though in a crowded field of nine rivals. Pretending that Bridgegate, the scandals involving corruption and self-dealing at the Port Authority, and charges that the Christie administration used recovery aid from Hurricane Sandy as blackmail against Hoboken’s mayor are all in the past, Christie is traveling the country, visiting as many as two dozen states, as chairman of the Republican Governors Association, and he’s setting fundraising records for the RGA by appealing to his real base, the über-wealthy, hedge fund managers and Wall Street. Indeed, on Monday night, according to a story by Heather Haddon of The Wall Street Journal, Christie spent the evening at a “thank-you party” with 140 big-money donors, including his chief backer, Home Depot’s Ken Langone, along with hedge fund wheeler-dealer Paul Singer and financier Lewis Eisenberg, plus New Jersey developer Jon Hanson, whose role was recently spotlighted in a Christie Watch series on Christie’s involvement in the controversial American Dream megamall at the Meadowlands.

Christie, of course, is hoping that New Jersey’s lagging economy and the pension crisis doesn’t go with him to Iowa, New Hampshire and South Carolina—except as a foil for him to show Republican how tough he is against unions and state workers. But thoughtful critics have challenged the very premises of Christie’s pension-slashing fervor and even State Senate President Steve Sweeney—a former Christie ally, who is thinking himself about running for governor if and when Christie resigns—said in an interview with the Star-Ledger that the “end game” of Christie’s pension campaign is “to make himself the darling of the national political scene again.” Sweeney is angry because back in 2011 he worked alongside Christie to enact painful pension and health-care benefit cuts, in exchange for which the governor promised to make regular payments into the pension fund—only to find, in 2014, that Christie reneged on the payments and is demanding that the state legislature enact even more cuts. As Sweeney told The Star-Ledger:

The labor people were not on my side when I did the previous reforms, but my comments were ‘I have the payment guaranteed.’ Now you know what I have? I have nothing.… So how do I go back to people in good faith and say ‘trust me this time.… I’m going to double-pinky swear it will work this time?’

At Wednesday’s Belmar event, the outrage over Christie’s pension antics was palpable. Susan Twidle, a teacher and member of the Freehold Regional Education Association, said the she attended the event to register her concern over Christie’s refusal to make the promised pension payments and over his demonizing of teachers:

He talks about shared sacrifice, but he’s not sharing. I had to take a second job. I almost feel like I have to defend myself, when I talk to people, that I’m a teacher. … We’re paying $700 more per month, per family [since the 2011 deal] and in exchange he started to make payments into our pension fund, but this year he didn’t make the payments. … He’s going on tour like he’s a rock star, without even saying what he’ll do. It’s the death knell for unions, and it’s happening across the country.

Before the event got underway, the Solidarity Singers performed for the crowd, signing a ditty called “Chris Christie” written by Tom Bias, a printer who lost his job at age 60 in 2010. Bias said that he wrote the words to music from an old Oklahoma country swing song called “Roly Poly, Daddy’s Little Fatty.” That was an inside joke, he said, since the song itself doesn’t refer to Christie’s weight problem. One verse:

Treats the teachers like fools
And wants to close down Newark schools
He hurts working families that way.
Chris Christie, Jersey’s old big bully—
Imagine if he’s president some day.