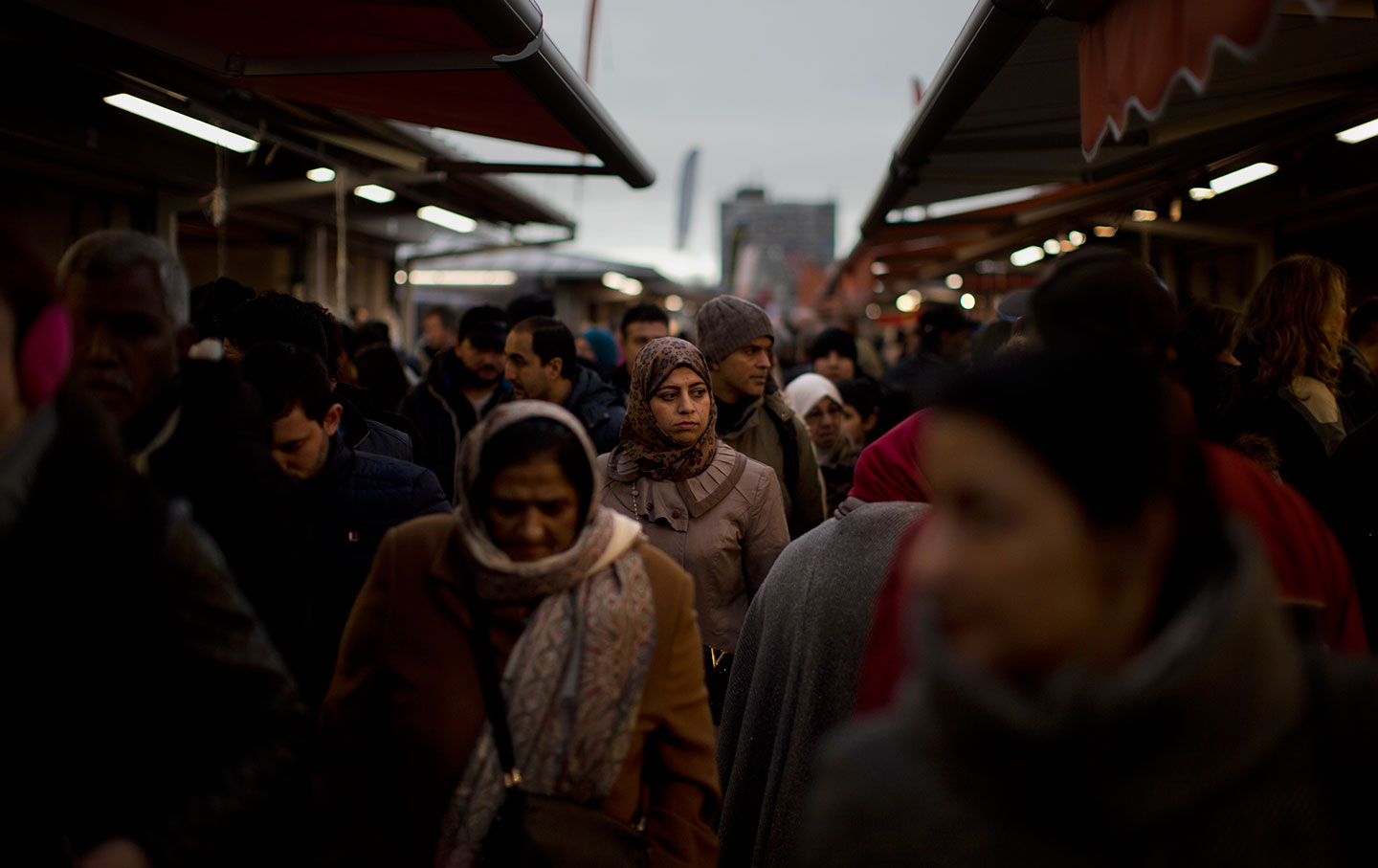 People walk along street stalls at a fruit market in The Hague in one of the most culturally diverse neighborhoods in the city, Saturday, March 4, 2017. (AP Photo / Emilio Morenatti)

When your boss forces you to choose between your job and your religion, it probably feels like discrimination. But Europe’s highest court has decided in a landmark case that this is actually perfectly “neutral”—if you’re a Muslim woman.1

The European Union Court of Justice ruled last month that EU law permitted private employers to forbid the wearing of the hijab, or Muslim head covering, as long as it was part of a blanket regulation covering any religious, philosophical, or political symbol within a workplace—that is, the company is technically “neutral” in not singling out any particular identity group for the ban. 2

In a case involving multinational security firm G4S, the court upheld a prohibition on the hijab that had forced Samira Achbita to basically either keep her office job, which required no duties conflicting with her religious practice, or stop expressing her religion through her dress. In a parallel but contradictory ruling, however, the court opined that the France-based tech multinational Micropole could not dismiss a worker in response to a customer’s complaint. Design engineer Asma Bougnaoui had been permitted to wear her veil but her boss demanded she dress “neutrally” after the customer complained against being served by a Muslim. But the court upheld the employer’s policy only in the G4S case because it was an official preemptive rule, rather than a blatant reaction to a single customer’s expressed prejudice. To both women, the consequences were similar: economic disenfranchisement and alienation in a society where headwear has become a fashionable political battlefront.3

Ruling on the eve of a critical Dutch election, which boosted the racist far-right Freedom Party, the court’s move in this political climate is raising concerns that the justice system has tipped rightward on anti-Muslim social attitudes, despite its duty to protect minority rights. Now, following the electoral surge of France’s anti-immigrant National Front, tensions surrounding the marginalization of Muslim communities is becoming even more acute.4

Today, various Muslim dress bans are a fixture of public life across Europe, justified on the grounds that European nations value their “secular” identity over other concerns. Courts have previously upheld these policies as regulations on public space. But the case of G4S (which also employs people in the United States) marks an unprecedented intervention in private industrial relations. Amnesty International researcher Marco Perolini says that although employers had previously encountered controversies around imposing workplace dress bans, the court has now more formally curtailed workers’ legal recourse: “these sort of rulings can give a lot of leeway to employers to pander to their prejudices.”5

The court ruled that “the prohibition on wearing an Islamic headscarf…does not constitute direct discrimination based on religion or belief within the meaning of that directive” and there was no proof that the policy “was applied differently to Ms. Achbita as compared to any other worker.”6

But the workplace demographics matter here: Effectively, the only person affected in the office would be a visibly, openly Muslim woman, so in practice, she was targeted for openly expressing her religious beliefs at work. In context, the disproportionate punitive impact was clear, even if the terminology itself was religiously ambiguous.7

As a labor-justice issue, the ruling represents what critics call liberal racism masquerading as forced European integration. And given the impact on Muslim women, who already face structural discrimination and marginalization in the workforce, Perolini notes that anti-Muslim workplace policies alienate women economically and socially, and actually set back the cause of gender equality. Essentially, a boss now has more power to ask women “to remove their headscarf…if they want to increase their chances to find employment” or pressure them to take a lower-paying position instead. Giving employers so much discretion to make appearance-based employment decisions about Muslims, Perolini says, would be a compromise that few Christian women would ever face.8

While Muslim women might in some conservative communities be pressured into wearing the veil, some progressive hijabi activists defend “modest dress” as a question of individual choice, even a show of personal empowerment. That might strike some Western feminists as awkward or ironic, but that tension exposes deeper cultural fissures in feminism. The question before the court wasn’t about personal style, but about how Muslim women’s identities are changing both the public and private sphere in a diversifying but increasingly divided Europe. In defining “secular” through assumptions that intrinsically exclude Muslims, the cultural frame alienates those who want multicultural Europe to not just accept them on their cultural terms, but to respect their personal autonomy.9

“The court could and should have seized the opportunity to put a halt to the multiple discriminations faced by Muslim women and protect their fundamental rights, but they chose not to,” Karen Lecoyer, head of Muslim Women Lawyers for Human Rights, told Al Jazeera.10

Ignoring those voices in court validates a potentially toxic mix of liberalism and right-wing reaction.11

Although the United States has a different legal context than Europe, with civil and workplace rights typically adjudicated under the framework of the Constitution, and more protection overall of private-sector religious freedom, the EU court ruling signals a stiffened edge in a debate across the “liberal West” over freedom of religion. State legislatures have come under fire for laws protecting Christian-owned businesses’ “right” to, for example, refuse to provide wedding cake catering to a same-sex couple. If even militantly secularist France has now openly sanctioned workplace cultural discrimination, could a dispute over Hobby Lobby’s rejecting insurance coverage for contraceptives, for instance, or over a factory refusing to provide gender-neutral for transgender workers, reach even further extremes in US courts? When should a corporate code of conduct trump the Bill of Rights?12

According to Amnesty’s Muslim community surveys, Marco says, Muslim women perceive “a very strong contradiction on the part of the state…saying oh, you have to integrate into basically a model that in fact reflects not only the values but also the appearance of the white majority…. It’s really contradictory to ask religious minorities to integrate and then establish policies that in fact can cast them out even further in a key area of life like employment.”13

It’s easy to hide discrimination behind “neutrality” in the arcane language of corporate codes of conduct. It’s harder for companies to proactively draw a line against racism by siding with justice.14