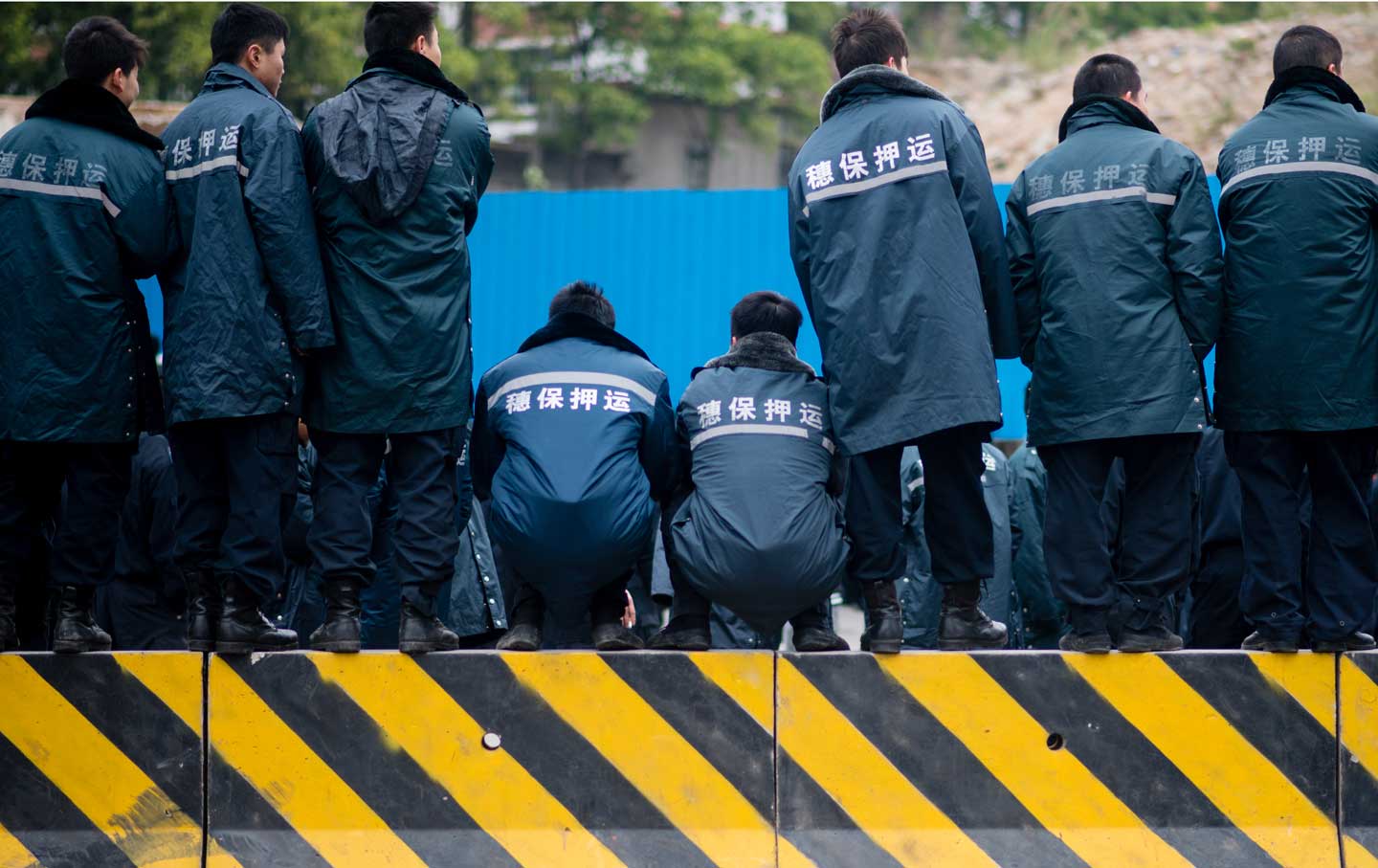 In an unprecedented crackdown on some of China’s most effective independent labor organizations, known as worker centers, seven worker-activists have been detained and held virtually incommunicado in detention facilities in Foshan and Guangzhou.

The activists are reportedly being detained on grounds of “endangering national security,” according to Amnesty International. It is unclear whether charges have been formally brought; earlier reports indicated Zeng and Zhu had been apprehended on lesser charges of “disrupting social order,” and He charged with “embezzlement.” Attorneys, restricted from communicating with them, have demanded clarification on the charges. The national-security charges, Amnesty reports, “could lead to a sentence of up to 15 years imprisonment.”

Advocates report that He and Zhu’s lawyers, along with detainees’ family members, have been arbitrarily barred from visiting. And Zhu, a former migrant worker from Henan turned organizer, has been denied bail and is unable to reunite with the baby she is nursing. Authorities have also reportedly questioned and harassed dozens of relatives and affiliates of the detainees and their groups.

While the government remains mum on the detentions, the police sweep seems an unusually harsh crackdown on community-based groups that have long struggled to balance mutual aid and advocacy without courting controversy. Working outside the international spotlight and concentrated in China’s gritty southern manufacturing belt, organizers toil thanklessly each day on behalf of local workers: filing complaints, winning back wages, fostering collective bargaining, and occasionally mediating strikes and other workplace conflicts.

But this is not the first security clampdown these activists have experienced. The website China Change has detailed the activists’ often tumultuous career as rank-and-file organizers. Zeng, a former corporate lawyer turned grassroots labor organizer, was detained and threatened by police, and later attacked by unidentified assailants, after helping to coordinate a major strike at a Guangdong shoe factory in late 2014.

Peng Jiayong, a veteran labor activist who became a full-time grassroots rabble-rouser after he was fired for trying to organize coworkers at a foreign-owned company, was assaulted by “eight unidentified men and severely injured” last April, according to China Change.

But what makes these activists so dangerous? Unlike the Ai Weiwei school of celebrity dissenters known worldwide for their subversive spectacles, Nee says, worker centers are comparatively low-key and pragmatic. They typically prefer to use arbitration and negotiation with management, rather than direct action like strikes, which they would generally treat “as a tactic of last resort.”

Coinciding with wider crackdowns on journalists and activist lawyers, the detentions might signal an effort to tighten the government’s stranglehold on civil society. One veteran labor activist, commenting anonymously on a Hong Kong commentary site, explained that “the raids were well planned from a higher level of government,” and that facing an economic slump, by targeting activists who were “promoting a positive attitude to the workers’ collective bargaining,” the government was actively suppressing “the legitimate aspirations of workers.”

Meanwhile, a wave of labor unrest is roaring across southern China. According to the watchdog group China Labour Bulletin, labor protest incidents in Guangdong have recently spiked, from 23 in July to 56 in November, mostly in manufacturing workplaces where workers protested over unpaid wages, “factory closures, mergers and relocations.”

Elsewhere in Guangdong, Walmart store workers are escalating their long-running struggle to defy the government-run union apparatus, the All-China Federation of Trade Unions (ACFTU), by campaigning for independent candidates. While their actions are not directly connected to the NGO crackdown, their struggle for independent unionization underscores the challenges of building autonomous rank-and-file power in China’s increasingly globalized and precarious workforce.

Both the silencing of worker centers and Walmart’s insurgent union drive point to growing tensions between independent labor activism and the management-aligned official union system. In many workplace disputes, according to CLB’s research brief on China’s labor movement, labor unrest has outgrown the ACFTU bureaucracy, which typically serves to neutralize disputes on management’s behalf. In recent years, workers “have been perfectly able and willing to bypass the trade union entirely and organize strikes and protests themselves in their pursuit of better pay and conditions.”

“The union doesn’t do anything” to promote workers’ interests, according to Hong Kong–based labor scholar Anita Chan. A lack of strong unions, she adds, is one reason groups like Dagongzu have approached labor relations through “legalistic” rather than militant means.

Over the past decade of reform-era union activity, Chan says, grassroots organizing has been impeded by an oppressive political climate. Even in larger worker uprisings, such as last year’s massive Yue Yuen shoe-factory strikes, protests have been co-opted by union officialdom or quashed by authorities, and haven’t engendered sustainable autonomous organizing campaigns.

“All these strikes, they’re directed against management, not against the state,” she observes.

Still, though the targeted groups face challenges from the state and business, a global groundswell of solidarity has emerged to defend the detainees as symbols of a labor movement that is as vital as it is endangered.

In the Hong Kong Confederation of Trade Unions’ online petition, signed by numerous human-rights groups and European and Asian labor organizations, the union’s globalization monitor, “The Chinese government purports to advance the ‘rule of law’ within its borders and promotes the idea of a civilized and peaceful rise internationally. However, local governments abuse their power, using violence and arrests to repress and intimidate labour organizations, preventing Chinese workers from pursuing fundamental labour rights.”

In Nee’s view, the support for the detained activists stems from solidarity as well as from gratitude for the role of the worker centers in movement building and training rank-and-file organizers. “A lot of the reason why the strikes [and protests] have succeeded,” he says, “is because of worker solidarity and a new rights consciousness.… Once people are aware of their rights, it’s kind of hard to go back unless you permanently try to silence them.”

The persecution of Guangdong’s worker-activists exposes the hypocrisy of China’s “rule of law.” Nonetheless, it also reveals an emergent political landscape for labor: While the state can suppress individual activists, the consciousness of workers is rising too fast for anyone to contain it.