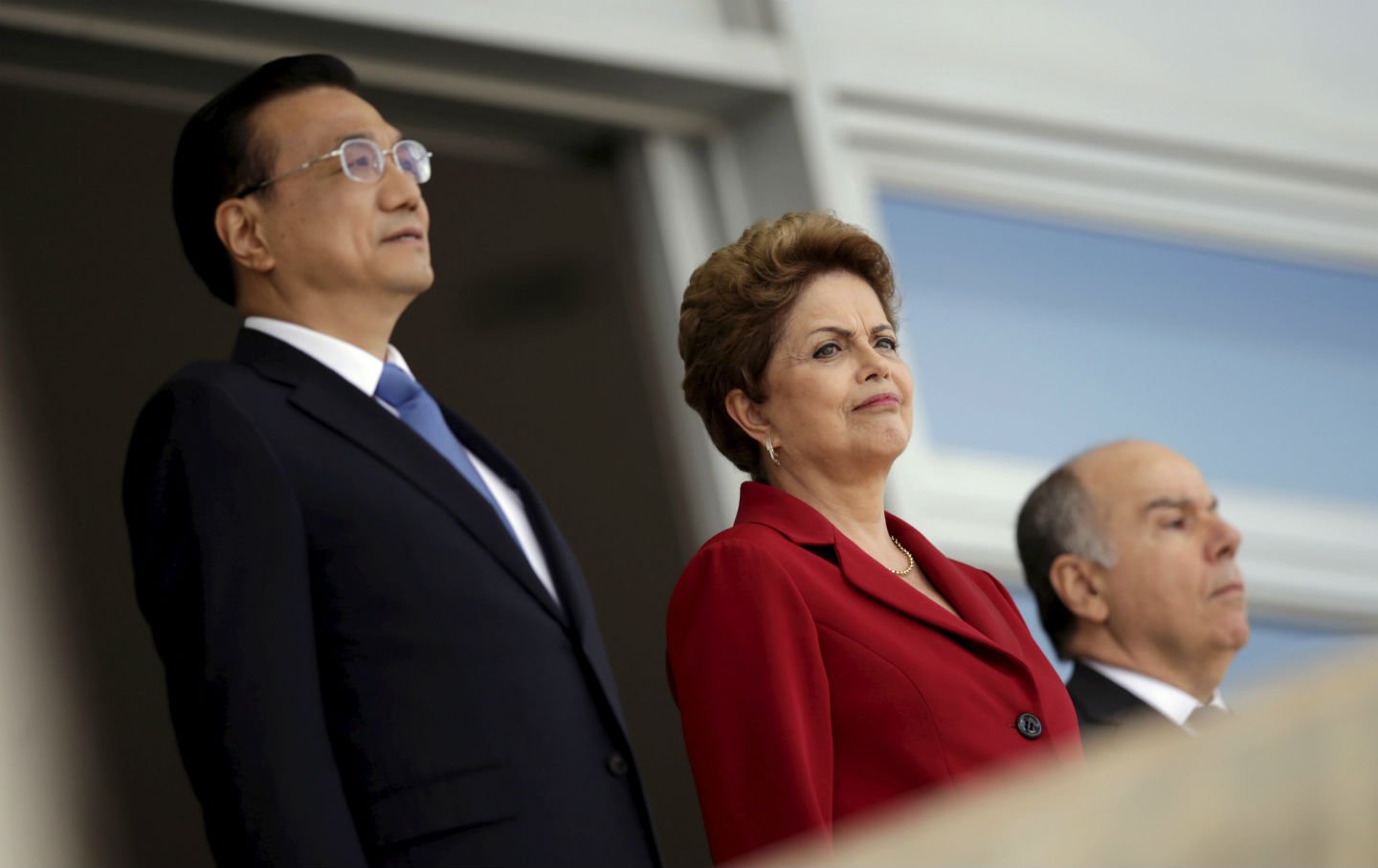 It’s been a while since China built a transcontinental railway in the Americas. Last time, Chinese laborers were deployed to work on the railway that linked the East and West Coasts of the United States—and were rewarded with epidemic labor abuse and racial-exclusion laws. Today, China has a lot more to gain from its latest railway construction venture: linking two oceans again, but this time across South America, in a bid to grow its dominion in a region historically viewed as Washington’s backyard.

The interoceanic rail line crossing Brazil and Peru—sinophilically branded as the “Twin Ocean Railroad”—would facilitate cheap exports from Latin America to China, by channeling raw materials from inland resource bases to coastal ports. The grand railway, projected to cost about $10 billion, is billed as a solution to the logistical barriers that currently impede overland transport, streamlining shipping and cutting processing costs.

The key beneficiaries reflect a cross section of the kind of breakneck development that many “emerging” economies in Latin America often covet: The project will boost Brazil’s soybean industry, a sector known for destroying local habitats through soil erosion and deforestation, spurring widespread population displacement and social turmoil.

Expanded rail infrastructure will facilitate hydrocarbon and fertilizer exports, two of the most destructive raw-materials markets in terms of local ecological damage and global climate change.

According to Thomas Alvarez, a research associate with the left-leaning think tank Council on Hemispheric Affairs, the rail project is “definitely a form of neocolonialism… not in the sense of the United States where they were trying to push their ideology of Western democracy, because China’s never really been interested in this.” Instead, China lacks the pretense of benevolent imperialism that Washington has imposed since the days of the Monroe Doctrine: “They’re in it for economic gain.”

But as with the “Yankee imperialism” of yesteryear, there’s been evidently little accounting for the human and environmental costs of this expansion of extractive industries.

Mega-projects like Twin Ocean have “a history of human-rights and environmental abuses by both companies and the state,” says Julia Mello Neiva of the Business & Human Rights Resource Centre. This ties into a tendency of “not respecting indigenous or traditional population’s rights” and “lack of adequate consultation” with local communities.

In Peru, according to China Dialogue, “there are more than 600 indigenous communities of different language groups that stand to be affected by the project including around 15 living in voluntary isolation.”

Spanning 4,400 kilometers of Brazilian territory, the railway would penetrate delicate, often weakly protected ecosystems. The rail would run through the livestock hub of Capinorte, which feeds into one of China’s major beef-export markets. Trains would slice through the Cerrado biome, a rich tropical ecosystem scarred by systematic clear-cutting, which has been fueled by the expansion of fossil-fuel extraction and industrial agriculture

The railway may complement enhanced trade routes through another controversial mega-project, the planned Nicaragua canal (a Panama Canal alternative). That venture, run by the private Hong Kong Nicaragua Development Group, carries its own set of environmental troubles, including displacement of farmers and potential devastation of the region’s major freshwater body, Lake Nicaragua. (One 2014 study estimates the excavation process would “destroy around 400,000 hectares of rainforests and wetlands.” In 2013, a legal challenge waged by several indigenous communities and other groups was overridden by the National Assembly—another blank check for unencumbered “development.”

A similar pattern is already underway in Ecuador. There, as Andrew Ross has reported, PetroChina’s oil-plundering partnership with Andes Petroleum threatens the wholesale destruction of indigenous villages and Amazonian habitats—all marketed as part of President Correa’s “sustainable” growth agenda.

From a global-development standpoint, China is in fact exporting a development model perfected on its own territory. A key stakeholder in the Twin Ocean project is China International Water & Electric Corporation, which helmed Southern China’s massively destructive hydroelectric mega-project, the Three Gorges Dam.

It’s unclear to what extent Latin American labor will be engaged. Chinese companies are known for bringing their own labor, rather than using the local workforce, though it appears to be leaning toward more local hiring these days. Labor issues have cropped up in past foreign-owned operations, such as the numerous costly strikes and contract disputes seen at the troubled Shougang Hierro Peru mine. (Labor issues have been reported even among Chinese workers deployed to overseas Chinese-invested projects.)

Western political observers fret about China overtaking US geopolitical influence in “emerging” economies. According to Foreign Affairs, China is aping American-style “soft power” by investing massively in friendly, sometimes non-democratic regimes across Africa, Asia, and Latin America (the eye-popping outlays include $50 billion for the new Asian Infrastructure Investment Bank and an estimated $1.4 trillion worldwide in the coming years). But the zero-sum game isn’t about rivalry between state actors. Power isn’t really shifting, from the perspective of the least powerful: As always, it is the poor, the indigenous, the dissenting voices who pay the underlying price of development.

According to the documented human-rights record surrounding neoliberal development in Latin America and the Caribbean, the corporate-controlled planning process used by Western and Chinese multinationals alike has hurt both Chinese and Latin American workers. Whether sponsored by Western or Chinese investment, mass resource exploitation militates against human, labor and environmental protections worldwide. And, paralleling the labor and community unrest in Latin America, China faces its own plebeian upstarts: construction and factory-worker strikes, maybe the occasional village uprising.

Neiva pointed out that China has confronted significant public resistance over controversial mega-projects before, and Brazil’s ongoing economic expansion might be tempered by a strong civil-society response. Since Brazil is already deep into its infrastructure-expansion program, she says, “somehow we as a society chose this path of development, so we have to now protest, in the sense of how we want to grow. Do we want to grow respecting social and environmental rights, or mostly only economic rights?”

Beijing’s transoceanic vision may present itself as an alternative to business partnerships with the historical American hegemony. But the China trade speaks the same language of global capitalism: profits trump people, no matter which superpower is holding the cards.