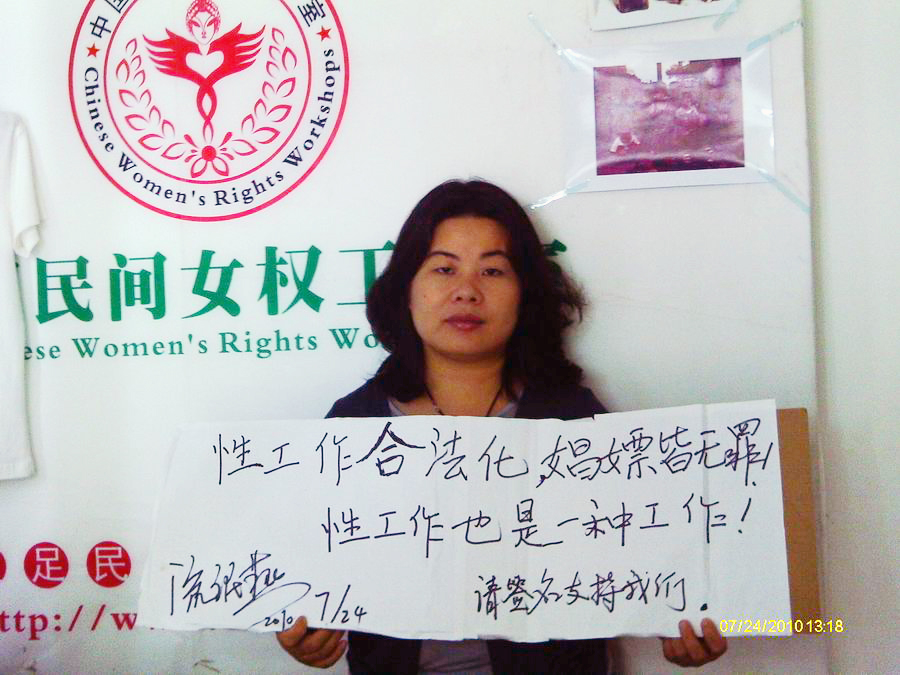 With a billion consumers, China is a land where everything can be bought and sold, and sex is no exception. Alongside pirated movies and blue jeans, the exchange of carnal pleasures for money is a pillar of China’s capitalist boom. But its workers toil underground, often in extraordinarily abusive conditions. Now, a lone voice for China’s sex workers is being gagged on the eve of her appearance at the International AIDS Conference in Australia—an echo of the painful silence surrounding China’s hidden human rights crisis.

Ye Haiyan, who goes by the online alias Hooligan Sparrow, is known for raising hell to defend sex workers from exploitation and violence, as well as for her pioneering outreach work on HIV/AIDS. She has been effectively denied permission to attend the AIDS Conference in Melbourne. Evidently the Chinese government has “blacklisted” her from traveling abroad, continuing a growing pattern of suppressing dissidents.

Ye’s planned presentation at the conference focused on the theme of “sex workers as human rights defenders.” Her work takes a harm-reduction approach, emphasizing the public health imperative of engaging sex workers in fighting HIV/AIDS, and the structural oppression fueling the spread of the epidemic globally.

Although sex work has thrived in China since dynastic times, its modern incarnation has become a flashpoint for prickly political and cultural tensions. From stereotypical seedy brothels to the highest circles of Chinese officialdom, there is burgeoning market for sexual services wherever there are people willing to pay. But as in the West, sex workers are systematically disenfranchised as citizens and economic actors. Ye shed a harsh light on these workers’ struggles in 2012 by blogging about her experience living as a sex-worker-for-a-day in the southern city of Wuhan, documenting the hardships and abuse faced by both the workers and the poor farmers and migrant laborers they served.

On her blog (quoted in The Daily Beast), she recalled watching a colleague get swept away by authorities: “I felt useless…. I watched my sisters being plundered by the police and there was nothing I could do to help them.”

According to a 2013 Human Rights Watch (HRW) investigation on China’s sex workers, sex workers told researchers of “arbitrary fines, of [having their] possession of condoms used as evidence against them, of being detained following sex with undercover police officers, and of having almost no hope of winning remedies for rights violations by clients, bosses, or state agents [a well as] high risks of sexually transmitted infections, including HIV.”

Some women interviewed by HRW from 2009 to 2011 described torture as an occupational hazard. A sex worker from Hebei recounted the interrogation routine: “They look for evidence. If you don’t admit, they’ll beat you. But if you can bear the beating, usually they’ll detain you for 24 hours and then let you go. But if you admit to prostitution when they beat you, [you might] be sent to Re-education [labor camp] for six months.”

While sex workers are socially marginalized, the government hypes anti-prostitution crackdowns as part of its crusade against corruption, known as “sweeping away the yellow.” Typically, according to HRW, prostitutes are portrayed as symbols of an “ugly social phenomenon” that threatens “socialist spiritual civilization.”

Ye challenged the government’s dehumanizing rhetoric in 2010, when authorities staged massive raids on brothels and exposed women to public shaming. Ye and her group, Chinese Women’s Rights Workshop, demanded not only protections for sex workers’ rights but full legalization of the industry. Global Voices quoted Ye’s criticism on social media:

Previously, I had no intention of making demands for legalization, I had only hoped that under the current state of things, the rights and interests of our sisters would receive greater protection.…

But the crackdowns this year have been insane and leave me feeling hopeless. Every day when you look at the news, you see sex being criminalized everywhere across the country; when they see the cameras, sisters will hang their heads our cover their faces as they get paraded around, exposed and publicly humiliated. So, I decided I could no longer hesitate or be wimpy about this.…

Yes, I’m pro-legalization, and this fight is against the persecution of sex!

Ye had observed firsthand how aggressive policing had made local sex workers apprehensive about using the condoms her group distributed, for fear they could be used as “evidence.” She advocated legalizing prostitution into an open, regulated market system (perhaps appealing to the government’s development agenda of controlled free-market growth).

And she urged the public to recognize the anti-democratic roots of the stigma surrounding the sex industry:

Chinese people are too closed-off in their lives, too cut off from information. Many don’t even know what it means to be alive, never mind embrace their own rights and interests or respect the rights of others.…

Regardless of whether or not you support them, sex workers still have the right to make their voices heard and to express their own demands.

The controversy that triggered the recent travel ban was more directly related to the government: she had openly condemned a Hainan school principal and government official accused of raping a group of girls. She was then physically assaulted and evicted, according to the Sydney Morning Herald.

If it is politically motivated, the grounding of the Hooligan Sparrow before the AIDS conference reflects the government’s clumsy desperation to suppress civil society and maintain social power.

“Part of what [Ye] has really done extraordinarily well is to humanize the kinds of abuses sex workers are subject to, and…to humanize the face of sex work itself in China,” says HRW’s China Director Sophie Richardson. “And I think that makes some people, both officialdom and society deeply uncomfortable, because it remains such a taboo subject.”

Richardson adds that the government’s treatment of sex workers is also a test of its willingness to confront the reality of China’s HIV/AIDS crisis. “These are people who are among the best allies in that fight,” she says, “except that they’re marginalized, and abused and kept out of the discussion.”

Ye took to Twitter on Saturday to express her frustration at being unable to travel and to present some themes of the lecture she would have given at the conference. she urged the activist community to focus on sex workers’ rights beyond just issues of HIV/AIDS transmission, and to place their struggles in the context of “overall human rights development.”

Even if she can’t leave the country, the absence of Ye’s voice at the AIDS conference shows exactly what’s missing from the global human rights discussion—and why it matters that she cannot be there to speak for herself.