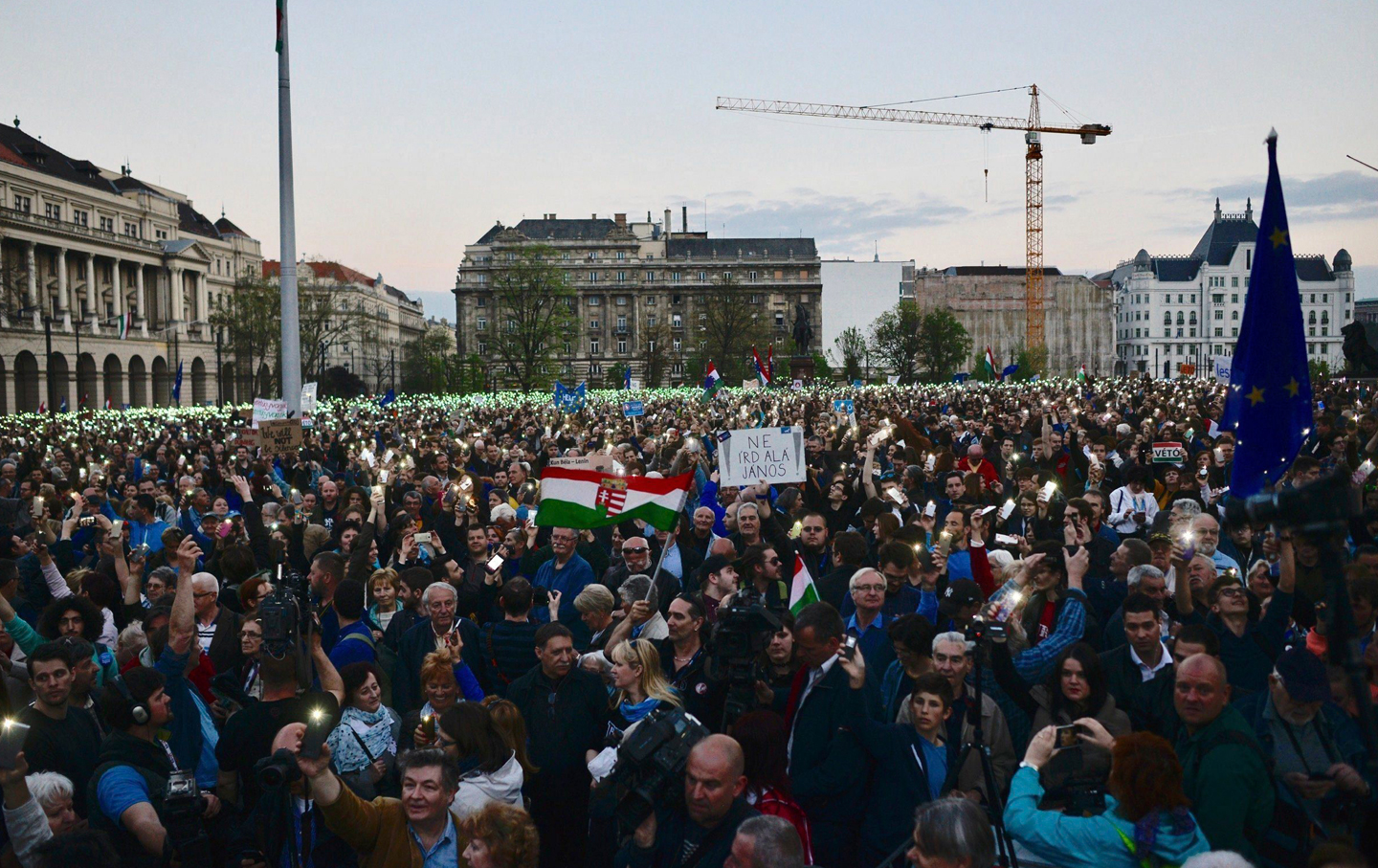 Demonstrators at the Hungarian Parliament in Budapest protesting legislation that would force the closure of Central European University, April 9, 2017. (MTI via AP / Janos Marjai)

On April 4, Hungary’s Parliament passed amendments to an existing higher-education law that were intended to force the closing of Central European University in Budapest, an institution created in 1991 to restore and revitalize an intellectual life that had been ravaged by decades of fascist and communist rule. Since then, CEU has expanded and evolved, becoming one of the most international and diverse universities in the world, with some 1,440 students from 108 countries enrolled in graduate programs under 12 humanities and social-science faculties. The amended law is a grave threat to CEU because it makes two demands that the university cannot fulfill: It must ground its existence in a bilateral treaty between Hungary and the United States; and it must open a campus in New York State, where it is also accredited. Otherwise, CEU must cease taking new students in the fall of 2018. The law was signed by the Hungarian president on April 10.

The government has not openly revealed the true rationale behind these measures. In an interview on state radio, Prime Minister Viktor Orbán accused CEU of enjoying unfair advantages over Hungarian state universities due to its dual accreditation, and even of breaking the law. Alluding to George Soros, the Hungarian-American businessman and philanthropist who founded CEU, Orbán said: “Even if someone is a billionaire, they cannot be above the law in Hungary…. Cheating is cheating, no matter who does it.” Orbán’s words blend falsehood with hypocrisy. Since its inception, CEU has abided by Hungarian law, and if it has an advantage over state universities, it is because Orbán’s government slashed funding for higher education by 25 percent between 2010 and 2013.

What lies at the root of the new amendments is Orbán’s contempt for CEU’s founder. Like right-wing politicians in Macedonia, Slovakia, and Poland, Orbán has been agitating against Soros for years, but with special venom since Donald Trump’s victory in the 2016 US presidential election; he has accused Soros’s Open Society Foundation of bankrolling the illegal entry of refugees into Hungary and of supporting his political opponents. Late last year, Orbán declared that all organizations associated with Soros must be “driven out of Europe.”

Orbán’s assault on CEU is not without precedent. In the 20th century, authoritarian and totalitarian regimes in East Central Europe repeatedly attacked the autonomy of universities, but few dared to liquidate them entirely. In Poland, Stalinists forced new statutes upon universities that allowed the Ministry of Higher Education to restructure hiring and research practices, but permitted the Catholic University in Lublin to continue to operate. Nazi Germany was more draconian: On November 6, 1939, German authorities, determined to turn Poland into a nation of semi-literates, sent the faculty of Jagiellonian University in Krakow to the concentration camps at Sachsenhausen and closed all Polish institutions of secondary and higher education. A little over a week later, Nazi authorities also closed Czech universities after student-led demonstrations against the occupation in Prague.

But only Adolf Hitler was Adolf Hitler. Who is Viktor Orbán? Some think he’s a cynic interested solely in power, but as an anticommunist student leader, he once called for Hungary’s return to the West, and became famous for publicly demanding the withdrawal of Soviet forces from Hungary in the summer of 1989. Fidesz (a portmanteau name for the Alliance of Young Democrats) was the party that Orbán co-founded in 1988; it belonged to the Liberal International, and he served as the party’s vice chairman.

Orbán began to change his stripes in 1994, when support for Fidesz dropped below 7 percent. He started dominating the party and its rhetoric, and sought out neglected constituents receptive to right-wing demagoguery. The reward came in the 1998 elections, when Orbán became the leader of the governing conservative coalition. Losses to the Social Democrats in 2002 and 2006 only convinced him not to relinquish power if he ever gained it again. In 2010, a catastrophic blunder by the Social Democratic prime minister, Ferenc Gyurcsány, who admitted in a secretly recorded speech that his party was intentionally deceiving voters, delivered a landslide victory to Fidesz. In Hungary, the winner of a majority is granted two-thirds of the seats in Parliament, so Orbán was able rewrite the Constitution, severely limiting the checks and balances of independent courts and media [see Kim Lane Scheppele, “Hungary and the End of Politics,” in the May 26, 2014, issue of The Nation]. Rather than protecting citizens from the state, Hungarian law has increasingly become a tool for exerting state power.

Orbán does not call his vanquished opponents “rivals” or even “enemies”; he describes them as “evil.” And if the other side is evil, of course, then one’s own side must be blameless. In short, criticism of the government can only be explained by a malignant foreign influence.

But when it comes to Soros’s influence, Orbán has a problem: Without funding from Soros in the 1980s—including a scholarship that sent him to Oxford’s Pembroke College—Orbán may never have embarked on a political career. (The problem isn’t exclusive to Orbán: Fidesz’s chief spokesperson, Zoltán Kovács, earned his PhD in history from CEU in 2002.) Yet since he broke with his patron in the early 1990s, Orbán’s determination to expunge all traces of Soros’s influence from Hungarian life has been especially acute.

The speed of this strike against Soros has been extraordinary: The amendments were approved by Parliament less than a week after being announced on the government’s website, and Orbán has now set his sights on Soros-sponsored NGOs like the Hungarian Helsinki Committee and the Hungarian Civil Liberties Union, which track human- and civil-rights abuses in Hungarian territory. The Hungarian Helsinki Committee recently defended two men from Bangladesh who were awarded €10,000 each by the European Court of Human Rights for being illegally detained and deported by Hungary in 2015. Orbán has described such organizations as “large-bodied predators…swimming in our waters.” A vote has been scheduled in May for legislation that forces these and similar groups that receive “foreign financing” to register with state authorities—as is already required in Russia—and to identify the sources and display the amounts on their websites, which could create the pretext for attacking NGOs as “foreign agents.”

A historian friend of mine writes that Orbán wants to drive CEU out of Hungary because it’s the “last symbolic place of resistance to authoritarian government.” Located just a few blocks from Parliament, CEU radiates open-mindedness, not only in the diversity of its student body and faculty, but also through hosting public lectures by notable thinkers from all parts of the world. But most of all, CEU’s success as a university has been breathtaking: In just a quarter-century, four of its faculties have come to be ranked among the top 100 in the world. Part of the secret is that CEU conducts its faculty searches and student admissions with no regard to national background: At a seminar there in early April, I met history students from Russia, Japan, Germany, Poland, and Greece, who were being taught by scholars from the United States, Russia, Romania, the Netherlands, and Hungary (about half of CEU’s teaching staff and 20 percent of its students come from Hungary). The result is a cosmopolitan environment in which no intellectual viewpoints are excluded, and where—in contrast to dozens of history departments in universities from the Baltic States to Greece—scholarship is not beholden to defending any local or national perspective.

And that is why CEU rankles. The illiberalism espoused by Orbán is the voice of nationalists whose sense of grievance is far out of proportion with historical reality, the voice of places “protected” by barbed wire, of worlds fearful of other worlds. This illiberalism withers only when people start asking pointed questions. Perhaps because Orbán himself is a beneficiary of Soros’s efforts to aid in the creation and defense of open societies, Hungary’s architect of illiberal democracy understands that an illiberal university is a contradiction in terms, and that the only way to resolve the contradiction is to make the liberal alternatives in Hungary disappear.