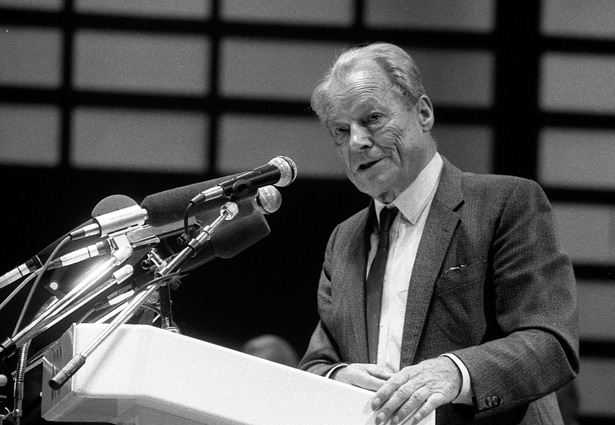 Germany’s emblematic and immensely influential postwar Social Democratic chancellor, Willy Brandt, was born in Lübeck on December 18, 1913. He shared Lübeck origins with the great chronicler of the disorder of the modern German soul, Thomas Mann, as well as with a revolutionary predecessor, Jürgen Wollenweber, the city’s Reformation mayor. Brandt was not his original name; it was a pseudonym from his period in the anti-Nazi underground. He was an illegitimate child and had to work his way out of desolate circumstances—one more thing, apart from his anti-Nazism, socialist convictions and internationalism, that many conventional Germans did not forgive. His early mentor was Julius Leber, murdered by the Nazis as the leading Social Democrat in the failed 1944 plot against Hitler. I recollect Brandt saying, “Anyone who thinks that the correct ideology suffices should consider the plotters, most of them conservative Prussians, but all with character and humanity.”

Brandt was 20 when the Nazis seized power in 1933. He left Germany when it was clear that resistance was tapering off, was in civil war Spain as a journalist, and finally settled in Norway. For a time he considered immigration to the United States and he always admired our capacity for democratic self-renewal. He fled Norway when it was occupied in 1940, went to Sweden and returned to Germany at war’s end as a Norwegian officer—again, something that millions of German chauvinists did not forgive.

Brandt decided to remain in Germany and join the struggle—by no means decided—for democracy. He was rooted in the German working class, but internationally experienced. He had made his own the reformist lessons of Scandinavian social democracy. He had an instinctive gift for political experiment and a no less pronounced one for knowing when to stop. He chose to work in the political caldron that was West Berlin, with its open border to Communist Germany, permanent Allied garrison and reminiscences of an extraordinary urban culture. By 1957, he was the city’s mayor, had the attention of the media by virtue of his office and was always good for a story himself. He began the construction of a network of supporters inside the nationally moribund Social Democratic Party. A list of his protégés reads like a history of the party from the middle of the last century to early in this one. In addition to younger people, he was drawn to returned émigrés and friends abroad who were Jewish. A Protestant himself, Brandt thought of Jews as Protestants with hearts, moral rigorists with humor and warmth.

In 1959, Brandt and his allies succeeded in rewriting and, more important, rethinking the party’s program. Revolutionary rhetoric that had already been out of date in Imperial Germany was finally dropped. Step-by-step reforms in education, healthcare, civic participation and workers’ rights took their place. Environmentalism and an initial charter of women’s rights appeared. Implacable opposition to West Germany’s rearmament had failed and the electorate, however reluctantly, considered integration in NATO necessary. The Social Democrats now proposed to join NATO in a new process of negotiation with the Soviet Union. The search for a modern version of social democracy led to the beginnings of a transatlantic political alliance, with the American groups forming around John Kennedy, younger politicians, scientists and writers, trade unionists and social reformers. Americans and Germans of a newer generation grasped that their wish to see Eisenhower and the even older Konrad Adenauer retire had similar sources. They sought renewal, not just continuity.

The burgeoning alliance between Kennedy and Brandt suffered a severe setback in August 1961, when a desperate East German regime stopped the flight westward of its citizens by walling them in. The construction of the Berlin Wall had huge long-term consequences. It demonstrated the moral bankruptcy of post-Stalinist Communism—but also the futility of the West’s rigid anti-Communism. His citizens disheartened and frightened, Brandt reproached Kennedy for doing little to help them. The American president, for his part, concluded that the erection of the Wall meant that despite Khrushchev’s ever-louder threats, West Berlin was safe from attack. He was angered by Brandt’s protests: no one would be served by beginning the apocalypse at Checkpoint Charlie. When Kennedy’s emissary, Gen. Lucius Clay, acted as if he were authorized to do so, he was called to order.

Their initial shock over, Brandt and his advisers took the absolute freeze in their own city as an incentive to rethinking. The superpowers had difficulty in talking to each other, but those entrusted with each of the two Berlins could try. Little by little, arrangements for West Berliners to visit their families in the East were put in place. Looking back, the measures seem minor; then, they were very large triumphs for Brandt. The Western allies were neutral, the West Germans skeptical and even hostile. Brandt persisted, and gained political capital not only in his own city but in West Germany and in a silently attentive Soviet bloc.

Brandt led his party in the elections of 1961 and 1965, improving its vote, but not enough to enter government. Then, in 1966, the Christian Democrats, who had sent Adenauer into retirement, needed a new coalition partner. Brandt became foreign minister and the Social Democrats began their own long march through the institutions—evoked by the student movement, but practiced by the Social Democrats and their allies in the unions. A singularly complex relationship bound most of the students and other protesters in the streets to the more circumspect parliamentarians under Brandt. Much of the German public, so authoritarian that it thought only with its hands on its trouser seams, was repelled by the spontaneity and vehemence of the new wave of social protests. It was baffled by new political ideas that had become governmental initiatives. Brandt, in an astonishing feat of design and improvisation, somehow held the separate halves of the movement for change together.

He was rewarded with a victory in the 1969 election and became chancellor. His inaugural address included a phrase, “Let us dare more democracy,” which echoed and re-echoed in West Germany rather like Kennedy’s “Ask not what your country can do for you, ask what you can do for your country” had done in the United States eight years earlier. Initiatives for reform sprang up in towns and cities, in state governments, in civil society. A new program opening the educational system enabled those previously bound to the shop floor (like later Chancellor Gerhard Schröder) to attend university. Workers won the right to place representatives on the boards of larger corporations. Social infrastructure was enlarged and renewed.

The newer generation of men and women who voted for Brandt’s Social Democrats also wanted surcease from the threat of nuclear war. Brandt could not alone persuade the superpowers to negotiate. But he could and did redraw the map of Central Europe by treaties with the Soviet Union, Czechoslovakia, Poland, Hungary and East Germany, which he actually visited. When Germany acknowledged that the eastern border with Poland was permanent, the irreconcilable German right was enraged and sought to enlist American help in undermining Brandt’s initiatives. But Lyndon Johnson and Dean Rusk, and after them Richard Nixon, Gerald Ford and Henry Kissinger, did not wish for continuing confrontation in Europe. With no small charge of ambivalence, they accepted Brandt’s initiatives. The American right—including the Democratic war party, led by Senator Henry Jackson—fumed. In the Soviet bloc, and especially in East Germany, Brandt was viewed by the public as their advocate, a leader preparing the way for future openings no one could exactly predict, but which he had brought into the realm of possibility, however remote.

Brandt won the Nobel Peace Prize in 1971 and a great parliamentary victory in 1972. Sadly, he became depressed and his projects faltered. There followed an episode still not entirely explained: With the West German intelligence services missing obvious clues, an East German spy was able to join Brandt’s staff as one of his closer assistants. At a moment when his colleague Helmut Schmidt (backed by the influential former Communist Herbert Wehner) wanted to replace Brandt, the affair provided them with a gift—Brandt’s resignation. Much remained in place, but the era of large reforms ended.

Brandt retained the chairmanship of the party, and later (1976) assumed the leadership of the Socialist International. In Germany, he used his status as elder statesman to back the peace movement, which gained so much strength in the late 1970s and early ’80s. The grotesque right-wing criticism of German “pacifism” got his very succinct reply: “There have been  worse things in German history than peace demonstrations.”

As President of the Socialist International, Brandt extended memberships to Latin America and the Third World, and intervened to give major assistance to the Socialist Party in Spain after Franco’s long-awaited demise. He ventured across the Atlantic to encourage his American friends at a conference on Eurosocialism organized by myself, Michael Harrington, the United Auto Workers and the Congressional Progressive Caucus. It was reassuring, as Reagan prepared to take office in December 1980, to have Brandt, François Mitterrand, Olof Palme, Felipe González and Tony Benn testify to other possibilities.

Brandt made another large contribution to the cause of universal peace and justice in 1980, when he presented a report on global economic and social development commissioned by Robert McNamara as president of the World Bank. It was followed by one on the human costs of the arms race.

Brandt was ill at the end of his life, but lived to see the fall of the Wall—which his policies of active coexistence had done so much to prepare. His visits to the reforming German Democratic Republic were met with outpourings of public gratitude. (I remember chants of “Willy! Willy!” in the Rostock cathedral just weeks after the breach.)

Like everyone who knew Brandt, I have plenty of anecdotes to relate. I’ll limit myself to two. First, however, I recall the largeness of his character; the alternation if stern seriousness and laughter; his fondness for the good things of life, certainly wine and women if not song; his capacity for sympathy and friendship; his instinct for situating others in their settings; his unfailing help to the young.

What I do recall is speaking with him at a Social Democratic congress in 1979, in what was still West Berlin. He was good enough to ask about my daughters, both then students in the city. “They are outside, demonstrating against the party’s arms policy,” I told him. “Fine,” he responded. “Perhaps they will meet my son Peter. He is there too.”

On his last visit to Washington, we had breakfast at the Willard—not a two-star hotel. The breakfast buffet was indeed excellent, and I remarked on his fine choice of a place to stay. He answered, “I was in far worse places when I was on the run from the Gestapo.”