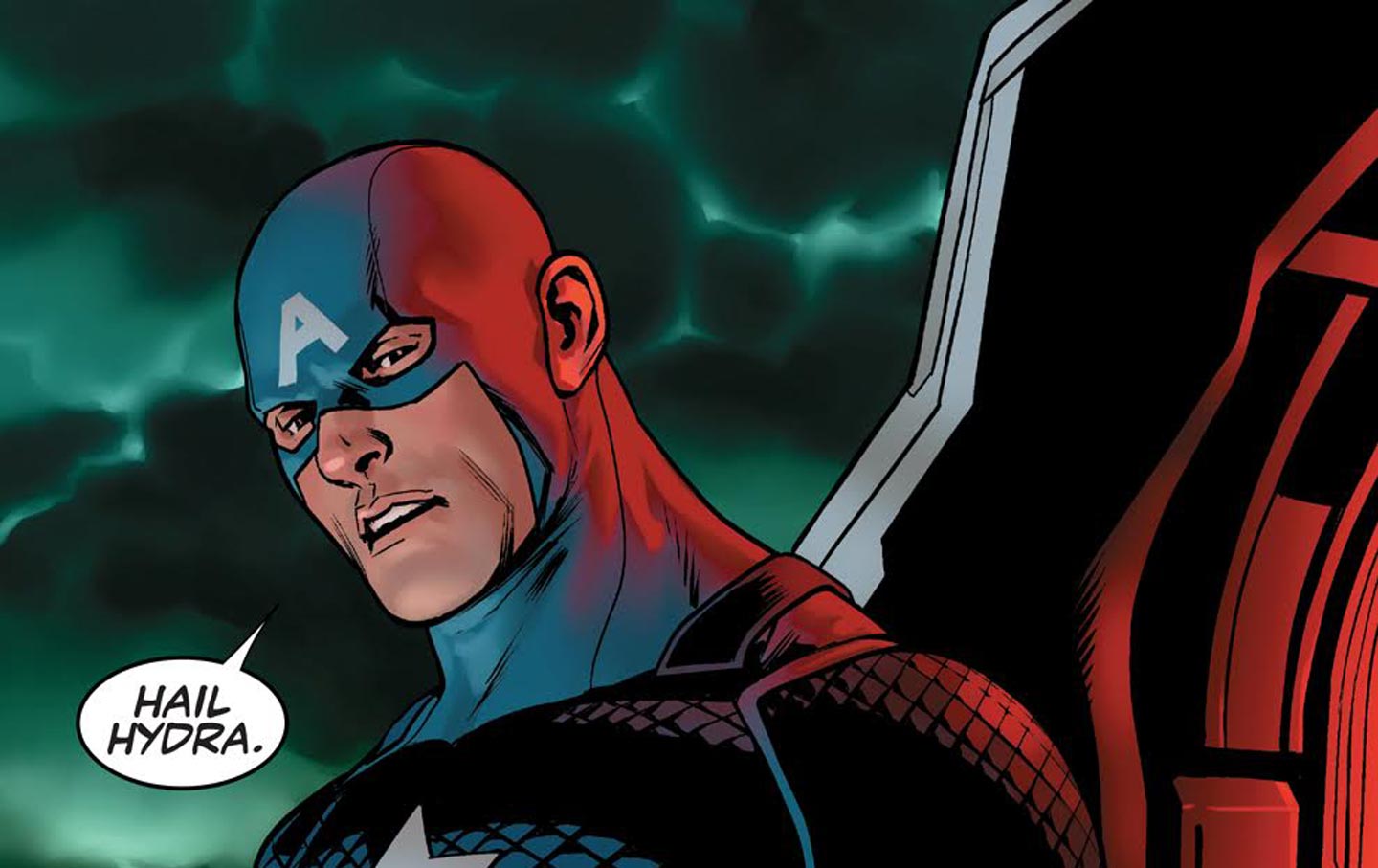 In the first issue of Captain America: Steve Rogers, released on May 25, the final pages dropped one of the biggest plot twists in comic-book history: Captain America, decked out in the stars and stripes, throws an ally out of a plane and says, “Hail Hydra.” (Hydra is the fictional representation of the Nazi party that Marvel created.) In just few pages, Marvel took one of the most beloved superheroes—the moral center of the Marvel universe—and made him into a supervillain. And people are not taking it lightly. Marvel Comics would tell you it’s more complicated than this, but Captain America is now (and apparently has always been) a Nazi.

The United States’ isolationist foreign policy and xenophobia fostered a debate about America’s involvement in World War II. 1939, the German American Bund, an organization of over 25,000 paying members who were known for their pro-Nazi stance, held a rally in Madison Square Garden “to proclaim the rights of white gentiles, the ‘true patriots.’” Against that backdrop, Captain America (Steve Rogers) first appeared in print in December 1940 (the issue is dated March 1941). The character was created by Jack Kirby and Joe Simon, who, like many comic-book writers at the time, were first-generation Americans, born of Jewish immigrants. “The Nazi Party was not the unquestionably evil cartoon villains we’re familiar with today; coming out in strong opposition to them was not a given. It was a risky choice,” the comics and pop-culture blogger Jessica Plummer writes. The now-infamous first issue cover of Captain America featuring Cap punching Hitler in the jaw, nearly a year before the United States entered WWII, wasn’t just an amusing knock at a dictator; it was a staunch political stance. Kirby and Simon were galvanized by the atrocities being committed in Europe against the Jewish people. “They had family and friends back in Europe who were losing their homes, their freedom, and eventually their lives to the Holocaust. The creation of Captain America was deeply personal and deeply political,” Plummer continues. In Comic Book Nation: The Transformation of Youth Culture in America, Simon spoke about their motivations: “The opponents to the war were all quite well organized. We wanted to have our say too.”

Captain America’s run ended in 1949, and the character was phased out of most comics (appearing sporadically in single issues across various Marvel titles) after the end of WWII, when superheroes began to wane in popularity. With the war over, we didn’t need heroes anymore. He was reintroduced four months after the assassination of John F. Kennedy, in March 1964’s The Avengers #4. Later, during the Vietnam War, Rogers experienced an existential crisis, struggling with depression and contemplating his effectiveness in a world rife with such conflict. When the Watergate scandal happened, Rogers gave up the mantle of Captain America altogether, and became Nomad, a man without a country.

Indeed, all comics constantly reinvent themselves. But this time, the change threatens Captain America’s role as the comic that is particularly suited for social commentary. Marvel executive editor Tom Brevort spoke to Time magazine about the decision to make Steve Rogers a long-time secret operative of Hydra, explaining that the lead writer Nick Spencer “is very politically active. He’s a Capitol Hill head and following this election very closely. So we can talk about political issues in a metaphoric way. That’s what gives our stories weight and meat to them. Any parallels you have seen to situations real or imagined, living or dead, is probably intentional but metaphorically not literally.” Captain America’s newly affirmed affiliation takes cues and rhetoric from a range of toxic individuals, like Donald Trump, and terror groups, such as ISIS. The metaphor Spencer and Marvel present is thinly veiled: Anyone who has checked social media over the course of the last six months of the election cycle could tell you that—there’s nothing shocking or revelatory here. Many fans and observers believe that the poor use of metaphor reveals more of an interest in boosting sales than in earnest storytelling.

Finally, a Comic Series As Ridiculous as the 2016 GOP Field

Welcome to ‘Bitch Planet’, the Feminist Sci-Fi Comic You’ve Been Waiting For

“When you decide to do something like this, you understand obviously that people aren’t gonna throw you a party for it,” Spencer told The Daily Beast. “You understand that this is the kind of story designed to upset people and shock people and worry people.” The hashtag #SayNoToHydraCap flooded social media, with fans and non-fans alike sharing their displeasure at Marvel and Spencer’s complete disregard for the history and significance of Captain America. And yet Captain America: Steve Rogers #1 sold out within the first week, despite a massive overprint, and is going back to press for a second run.

At the Wizard World Comic Convention, last weekend in Philadelphia, there was a sense of overwhelming anger at Marvel’s change to Cap’s history. From pins stating “Make Captain America Great Again” to a handmade shield exclaiming “Say NO to HYDRA,” fans expressed their displeasure with Spencer’s story line. One of them, Jennifer Gosselin, who drove with a friend from Virginia to see the cast of Captain America: Civil War speak, said, “I think that it’s a really, really great disservice to Kirby and Simon.… living at a time when Nazism was on the rise and it was very anti-Semitic, I just think making Cap Hydra, which is just the Nazis of the comic-book world, making Steve Rogers a Nazi is really dishonorable to them and to the Jewish creators everywhere.” When I asked Gosselin what it is about the character that makes him so important to her, she explained that Steve Rogers is the guy that stands up for what he believes in, against bullies and those who seek to put down the little guy. “He’s the monolith of American heroics,” she said. The search for a hero continues—in the metaphoric realms and in the literal ones.