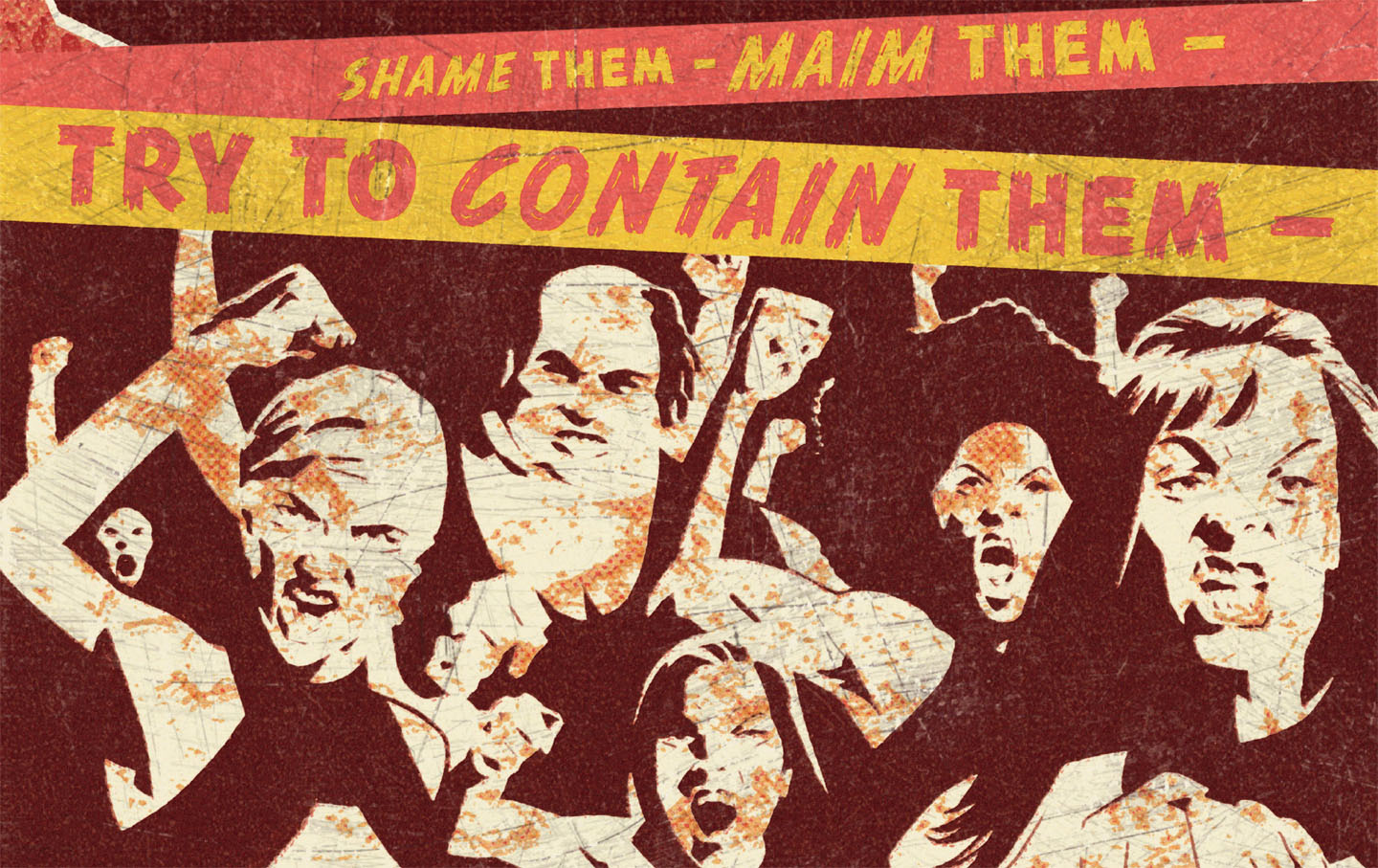 “In the beginning, God created the Heavens and the Earth,” the narrator explains in the opening sequence of panels in Bitch Planet’s first issue, released in December 2014. Juxtaposed against panels depicting women arriving at Bitch Planet, an “Auxiliary Compliance Outpost,” the narrator continues: “Mother Earth, we used to say, before we understood. Before we came to know the Heaven, to live here and feel her warm embrace. Space is the Mother who receives us, you see? Earth is the Father. And your Father has cast you out. For your trespasses… Your gluttony… Your pride… Your weakness… And your wickedness.”

The catalog of sins is listed over six separate panels, with one woman in each, giving the reader a graphic representation of the offenses. The drawings depict the women without any distinguishing features, shadows obscuring them, their bodies naked and exposed, contorted very deliberately in ways that indicate that this is not your usual drawing of a nude female. Welcome to Bitch Planet.

Bitch Planet is veteran comic-book writer Kelly Sue Deconnick’s newest series. Penned with artist Valentine de Landro, the fifth installment is being released today by Image Comics. On the surface, it has the classic science-fiction dystopian setting. Taking place at some time in Earth’s future, Big Brother is everywhere, robots police the streets, and space travel is sophisticated enough to move people off-planet. Specifically: women. More specifically: women who have been labeled “non-compliant.” But non-compliant women are not just shipped off to Bitch Planet—they’re imprisoned there. It’s a feminist take on the prison exploitation genre, with almost all of its major characters being women of color, and with all body types, genders, and sexual identities represented.

Women on Bitch Planet are at the mercy of the prison’s sophisticated artificial-intelligence technology. Taking the shape of a woman with blue eyes and teased hair, grinning broadly and wearing a corset, it is displayed on large feeds as the women enter the prison. Intake is violent; the women remain naked throughout most of the process, and the male guards supervising wear plastic masks and riot gear. But DeConnick and de Landro are careful in their telling—the women arriving at Bitch Planet are drawn with poise, their stances indicating that they would (and do) fight back against any attack.

Life on Earth, we’re soon shown, is run by a seemingly global government called the Council, of which all members are white males who carry the title of “Father.” A feed of news and sports is broadcast everywhere and viewing is mandatory. Compliant women on Earth are depicted as counting calories and learning about the upcoming global sport competition (think the Olympics meets The Hunger Games) so they can better relate to their men.

Female exploitation—and the inevitable revolution that will arise from it—is certainly nothing new in science fiction. Earlier this year, Mad Max: Fury Road was hailed for its portrayal of Imperator Furiosa (played by Charlize Theron) as the true hero of the post-apocalyptic action film. But DeConnick’s story pushes its patriarchal themes to the point of caricature while incorporating details of how women are treated today.

“The striking thing about Bitch Planet is that we’re already on it,” writes critic Danielle Henderson in Issue #1’s “Bitches be like…,”an essay series featured in the back of each issue. “We don’t have to get thrown on a shuttle to be judged non-compliant—be a little overweight, talk too loud, have an opinion on the Internet—or be a woman of color.”

In Issue #3, we’re given the backstory of one of the inmates, Penelope Rolle. An obese woman of color, she wears her body type proudly with a tattoo on her upper arm of two elephants and the phrase “born big.” Over the course of the issue, we’re shown in flashbacks that Penny was seized by the state from her grandmother’s custody when she was 8. The home that she is placed in is run by a thin, blond woman called Mother Siebertling, and the residence takes on the appearance of a stereotypical college sorority, with Greek letters on the wall, pageant photos of Mother Siebertling, and an abundance of pink decorations and flowers. In one jarring exchange between Penny and Mother, who is trying to set Penny on the “right” path of compliance, Mother scolds Penny for punching a boy who had been talking about her grandmother’s recent arrest. Mother apologizes to Penny—she had been hoping to keep the arrest from her knowledge—saying, “I’m sorry that I failed you,” as she begins putting on medical gloves and picking up a hairbrush.

“What are we going to do with this hair of yours, hm?” Mother asks.

“What’s wrong with it?” Penny responds.

“There’s nothing wrong, sweetheart. It’s just like you—it refuses to behave,” Mother says as she brushes Penny’s hair, which resembles neither stereotypical white nor black hair. “It’s not black or white, good or bad. Folks don’t know what to make of it because they don’t know what it is,” Mother says.

“Why folks gotta say what I am, Mother? Ain’t it enough to know who I am?” Penny asks.

“No, Penny,” Mother says, “It doesn’t work like that. You need to learn to see yourself through the Fathers’ eyes.” In creating Bitch Planet, DeConnick and de Landro asked themselves, “Can we do exploitation without being exploitative?” The answer, so far, is yes. By depicting women—specifically women of color—actively working to take power back, even from behind the bars of a prison on another planet, they’ve made something relatable and inspiring.

Indeed, after only a few issues had been released, readers began getting tattoos of the non-compliant symbol featured in the comics. DeConnick addressed the growing trend in an essay in Issue #4, stating, “To me, it says: I am finding the courage to be my authentic self, whomever he or she maybe. I do not fit in the box assigned to me.… I refuse to see myself through your eyes, just as I refuse to cast that same lens on my brothers and sisters. I will hold my head high and you will support me or get the fuck out.”

DeConnick’s comments were also written in reaction to some negative (read patronizing) reactions to the tattoo trend. Some men faulted those getting the non-compliant tattoo, warning that the future of Bitch Planet is unknown so early in its run and tattoos are permanent—like, seriously, they are for life! Surely the (mostly) women getting these tattoos are unlikely to know the realities of the comic-book industry or the permanence of tattoos.

Of course, the comic-book industry is heavily dominated by the superhero genre, and any venture away from that traditional archetype faces additional scrutiny. Further, overtly political comic books are not the norm. While many, if not most, mainstream comics are inherently political, very few are overtly so, and when they’re obvious, they’re ridiculed for it (sometimes rightfully so). For DeConnick, who is also currently a head writer at Marvel overseeing the character of Carol Danvers in Captain Marvel, comic books have always been political. “Bitch Planet is certainly overtly feminist and so is Captain Marvel,” she told i09 in December, “but I would argue that Carol Danvers as Ms. Marvel was overtly feminist when I was seven years old. I had nothing to do with that.” And although she says she doesn’t write Bitch Planet as a political statement, she doesn’t understand those who don’t see the very natural pairing of comics and feminism. Superheroes are “about standing up for the little guy and fairness and equality of opportunity. And those are the same things that feminism is about.”