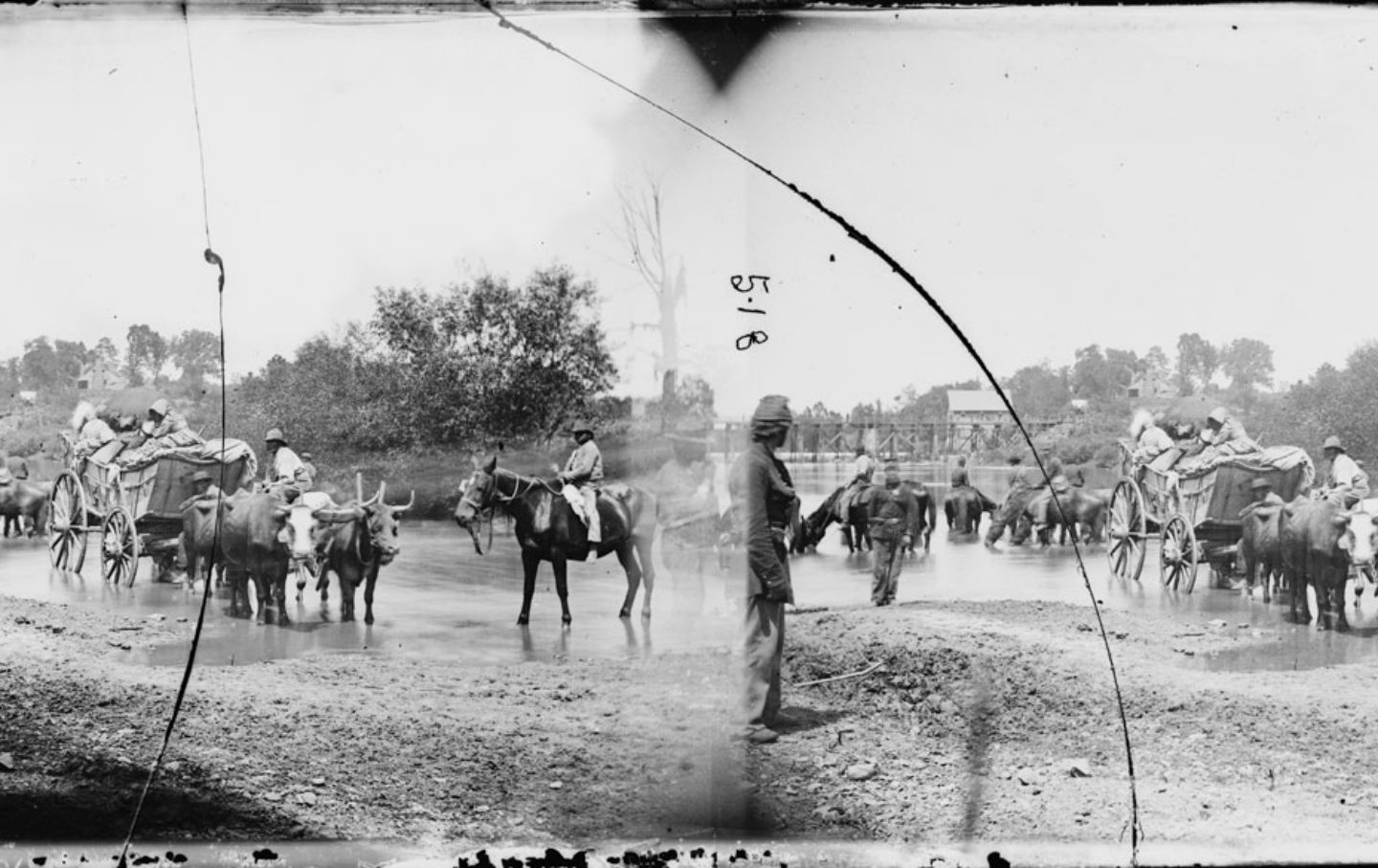 A daguerreotype of fugitive African-Americans fording the Rappahannock River, 1862

Last week, Columbia University presented the Bancroft Award to two books that directly address the relationship of capitalism, slavery, expansion, and empire: my The Empire of Necessity: Slavery, Freedom, and Deception in the New World and Sven Beckert’s Empire of Cotton: A Global History. Both are part of a renewed scholarly attention to capitalism and slavery, carried out by historians such Walter Johnson, Edward Baptist, Calvin Schermerhorn, Bonnie Martin, Kathryn Boodry, Seth Rockman, Ada Ferrer, Adam Rothman, and Caitlin Rosenthal (and keep an eye out for Ned Sublette and Constance Sublette’s forthcoming, The American Slave Coast: A History of the Slave Breeding Industry).

The argument that capitalism was dependent on slavery is, of course, not new. In 1944, Eric Williams, in Capitalism and Slavery, made the case. In 1968, the historian Lorenzo Greene wrote that slavery “formed the basis of the economic life of New England: about it revolved, and on it depended, most of her other industries.” Even before the expansion of slave labor in the South and into the West, slavery was already an important source of northern profit, as was the already exploding slave trade in the Caribbean and South America. Banks capitalized the slave trade and insurance companies underwrote it. Covering slave voyages helped start Rhode Island’s insurance industry, while in Connecticut, some of the first policies written by Aetna were on slave lives. In turn, profits made from loans and insurance policies were plowed into other northern businesses. Fathers who “made their fortunes outfitting ships for distant voyages” left their money to sons who “built factories, chartered banks, incorporated canal and railroad enterprises, invested in government securities, and speculated in new financial instruments” and donated to build libraries, lecture halls, universities and botanical gardens. Many of the millions of gallons of rum distilled annually in Massachusetts and Rhode Island were used to obtain slaves, who were then brought to the West Indies and traded for sugar and molasses, boiled to make more rum to be used to acquire more slaves. Haiti’s plantation’s purchased 63 percent of pickled fish from New England. In Massachusetts alone, David Brion Davis writes, the “West Indian trade employed some ten thousand seaman, to say nothing of the workers who built, outfitted, and supplied the ships.”

Starting in the early 1800s, Southerners in the United States began to defend slavery as their “peculiar institution” and northerners didn’t mind, since the phrase suggested that chattel bondage was quarantined from the rest of the nation, that it was, or soon would be, a relic of its past and would not define its future. But, for all the variation that distinguished the Catholic south from the Protestant north, for all the variance in regional intensity, the way the institution spread in different moments in different places, there was nothing peculiar or particular about it. Slavery was the western hemisphere’s universal institution. Centuries of buying and selling human beings, of moving them across oceans and continents, treating humans as property, paying taxes on them, putting them to labor, making profit off of their reproduction, and using them as collateral and capital, brought together the Western Hemisphere’s diverse parts, even those parts that didn’t seem to be directly implicated in the slave trade, into a greater whole. Slavery standardized maritime and commercial jurisprudence, including insurance. Slavery spurred individual regions to develop their comparative advantage—salting of fish in New England, curing of meat in Argentina, for examples (discussed in The Empire of Necessity). Defending slavery, opposing it, or attempting to reform and regulate it led to the transformation of Christianity, moral philosophy, and international law. Research into how to ameliorate the coerced transport of humans, or to make the transport more profitable, led to advances in medicine that today benefit us all. One of the things I tried to show in The Empire of Necessity was how, in Montevideo and Buenos Aires at least, the high mortality rate of the Middle Passage led to the secularization of medical knowledge: Every time a doctor threw back a hatch to reveal the horrors below, it became a little bit more difficult to blame mental illness on demons.

Despite all this scholarly work, each generation—from W.E.B. Du Bois to Robin Blackburn, from Eric Williams to Walter Johnson—seems condemned to have to prove the obvious anew: Slavery created the modern world, and the modern world’s divisions (both abstract and concrete) are the product of slavery. Slavery is both the thing that can’t be transcended but also what can never be remembered. That Catch-22—can’t forget, can’t remember—is the motor contradiction of public discourse, from exalted discussions of American Exceptionalism to the everyday idiocy found on cable, in its coverage, for example, of Baltimore and Ferguson.

In any case, for the award ceremony, the Bancroft folk asked for brief summations of our book. Here’s an excerpt from Sven’s:

Empire of Cotton explains the industrial take off of Europe and North America as a result of the emergence of peculiar kinds of uniquely powerful states, who built peculiar connections to capital owners who then, jointly, succeeded in integrating distant regions of the world into a European dominated world economy. They did so by engaging in violent trade with Asia, by transporting enslaved workers from Africa to the Americas, and by capturing huge expanses of land from native peoples in many regions of the world. In the story that follows from that account, the countryside matters as much as cities, slave labor as much as wage labor, violence as much as the rule of law, and coercion as much as contracts. The history of the United States is central to the ensuing story, because it was there that most of the cotton for world markets was grown, and, until 1865, almost exclusively grown by slaves. The United States matters to this story because it was one of the earliest examples of successful industrialization—in cotton textiles. And the United States matters because it helped pioneer new relations between industry and agriculture with the emergence of sharecropping regimes in the wake of the American Civil War. Just as much as the United States mattered to cotton, cotton mattered to the United States. Cotton reinvigorated slavery, established the young nation’s place in the global economy and eventually helped create the political and economic conflicts that resulted in civil war.

And here’s a bit from mine:

My first thought, when I learned that Sven’s Empire of Cotton and my book, The Empire of Necessity won the Bancroft Award, was to wonder whether cotton was a necessity or a freedom. And then I thought, of course, they are both, the wealth created from the trade and the labor needed to create the wealth. The two books complement each other well. Where The Empire of Cotton focuses on the material, institutional, and economic foundations and legacies of slavery, state formation, and market expansion, The Empire of Necessity (though describing in detail the labor and environmental processes associated with a range of free and unfree labor) is concerned more with the psychic and imaginative structure of slavery.… Capitalism is, among other things, a massive process of ego formation, the creation of modern selves, the illusion of individual autonomy, the cultivation of distinction and preference, the idea that individuals had their own moral conscience, based on individual reason and virtue. The wealth created by slavery generalized these ideals of self-creation, allowing more and more people, mostly men, to imagine themselves as autonomous and integral beings, with inherent rights and self-interests not subject to the jurisdiction of others. This process of individuation creates a schism between inner and outer, in which self-interest, self-cultivation, and personal moral authority drive a wedge between seeming and being. My point is that slavery was central to capitalist individuation, to the schism between inner and outer, which I believe accounts for the endurance of racism in American society, its quicksilver nature, as well as for its deniability. This is a dinner, not a conference. So I’ll end by cutting to the chase: I think the story at the center of The Empire of Necessity—revolving around the New Englander Amasa Delano’s complete and utter blindness to the social world around him—captures the power of a new kind of racism, based not on theological or philosophical doctrine but rather on the emotional need to measure one’s absolute freedom in inverse relation to another’s absolute slavishness. This was a racism that was born in chattel slavery but didn’t die with chattel slavery, instead evolving into today’s cult of individual supremacy, which, try as it might, can’t seem to shake off its white supremacist roots.