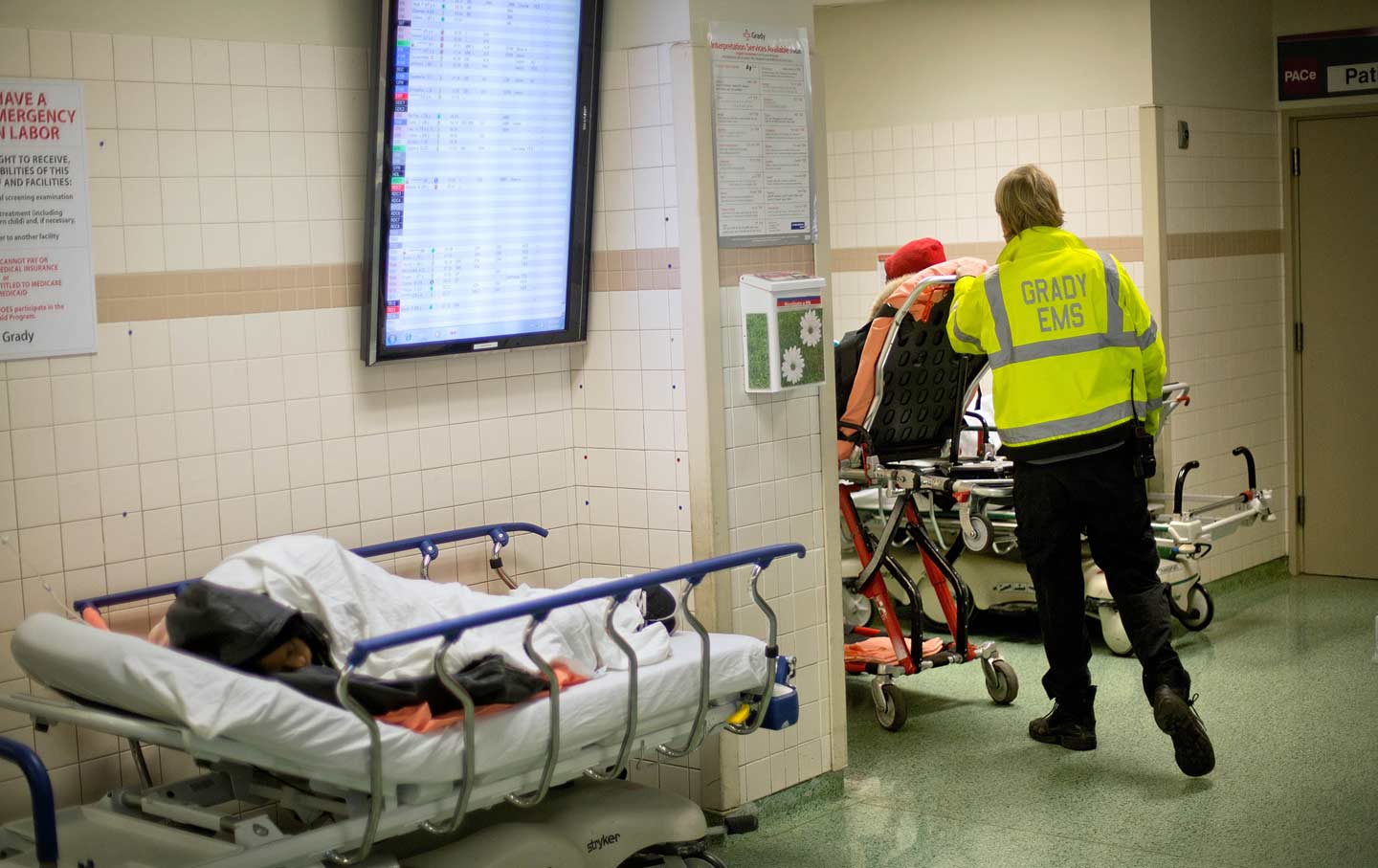 An EMS worker wheels a patient through the emergency department at Grady Memorial Hospital in Atlanta. (AP Photo / David Goldman)

What happens to people’s health and well-being when whole continents suffer economic decline, and millions of people become exposed to the strains of poverty? For nearly a decade, the Great Recession has presented researchers with a disturbing natural experiment in public health, and emerging data shows that cancer’s death toll rose along with social hardship.

Yet the groundbreaking study, just published in The Lancet, also suggests the health impacts of a financial collapse can be offset by healthcare policies that protect against the economic assault.

The analysis of disease trends in more than 70 nations shows cancer mortality rose by more than 263,000 deaths specifically in the wealthy countries of the Organisation for Economic Co-operation and Development, following the recession from 2008–10. Focusing on “treatable” varieties, like breast and prostate cancer, and less treatable cancers, researchers linked excess cancer deaths to rising, recession-induced unemployment.

A more specific, yet-unpublished dataset, co-author Mahiben Maruthappu tells The Nation, reveals that the United States “saw about 18,000 [excess cancer] deaths during that time, whereas the United Kingdom saw zero [excess] deaths…which we believe is likely or possibly due to the fact that in the US, there isn’t universal health coverage.” Similarly, higher public healthcare investment helped mitigate the negative effect of the recession on cancer death rates, regardless of unemployment trends.

The study did not explicitly compare different healthcare policies across countries, and so did not weigh relative benefits of a single-payer system, such as the United Kingdom’s National Health Service, or universal insurance, like Switzerland’s nationwide private-insurance system. Universality of services was the key. The findings demonstrate the obvious: Even amid economic disaster, even for deadly diseases like cancer, your medical fate improves significantly when access to care does not hinge on whether you happen to be gainfully employed at a business that provides a health plan. (The two-year research period also does not capture the more recent implementation of the Affordable Care Act, so coverage was significantly lower then in the United States.)

In the absence of universal coverage, joblessness affects treatment access in many ways. Loss of coverage could lead to a delay in cancer diagnosis. Or, amid intensified socioeconomic instability, the economic disadvantage associated with unemployment can lead to “less health-seeking behaviors,” along with “mental health and behavioral problems” that might limit one’s access to cancer treatment (for example, when chronic depression impedes a patient from maintaining a medication regimen).

The benefits of comprehensive healthcare investments go beyond cancer. In a study on rising suicide rates linked to the recession in North America and Europe, researchers found that suicide rates lowered significantly with every additional $100 spent on suicide prevention programs.

Nonetheless, spending alone doesn’t always improve health outcomes: The United States outspends every other comparable country on healthcare as a portion of GDP. But under the chaotic private insurance system, we spend a shocking amount shockingly badly. The US government generally provides public healthcare only to the aging (through Medicare) and the extremely poor (through Medicaid), and overall per capita healthcare spending is roughly double the amount spent for each resident in the UK’s single-payer system, where everyone is covered by a single public program. But in addition to higher cancer death rates during the recession, Americans generally have shorter life expectancy and higher rates of chronic disease.

According to Maruthappu, any truly universal healthcare infrastructure must be “sufficiently well financed and sufficiently well delivered…in terms of how it’s implemented across a system, how people are made aware to actually…use a universal healthcare system,” and above all, it must be accessible to all regardless of their health or social status. Otherwise, researchers warned, “amid a background of rising health-care costs, if spending restrictions are not accompanied by proportionate improvements in efficiency, worse quality of care and, in turn, higher mortality levels might follow.”

Even within the EU, where many countries offer universal coverage, the study showed that the recession was linked to a net rise in cancer mortality, which suggests that resource gaps might still persist even in regions where healthcare access is purportedly widespread.

That the complexities of a universal system might not fully protect everyone is also a precautionary note for Obamacare. Although the ACA has significantly expanded insurance coverage nationwide, in practice, major deficits in the care infrastructure persist, alongside racial and economic disparities in access. Meanwhile the insurance industry continues to destabilize people’s finances, as the government mandates enrollment in private health plans costing thousands of dollars a year.

Seeking an alternative to corporate-controlled medicine, some progressive segments of the medical community are offering a second opinion on healthcare reform. A recent petition signed by 2,000 doctors calls for a universal single-payer plan. According to an essay on the plan published in The American Journal of Public Health, the program would eliminate private insurance, along with copayments or deductibles. Completely publicly sponsored, the plan would basically expand the Medicare framework, which provides universal coverage for seniors, to the rest of the country. The question of cost efficiency would be resolved immediately as the overhaul of the system saved up to $500 billion annually through cutting administrative costs by some 15 percent.

The Lancet study complements advocates’ demands for universal healthcare as a social entitlement. Physician and activist Adam Gaffney, who co-authored the essay, says via e-mail that, with about 28 million people still uninsured, and many more burdened by devastating costs and inadequate services, “universal health care can attenuate the negative impact of economic shocks on our health…. A single payer system is the best—and most affordable—way to achieve universal health care, with first-dollar coverage, in the United States.”

So the remedies for our ailing healthcare system may be simpler than expected. What we call the healthcare gap is misdiagnosed: It’s actually a blind spot in our political imagination.