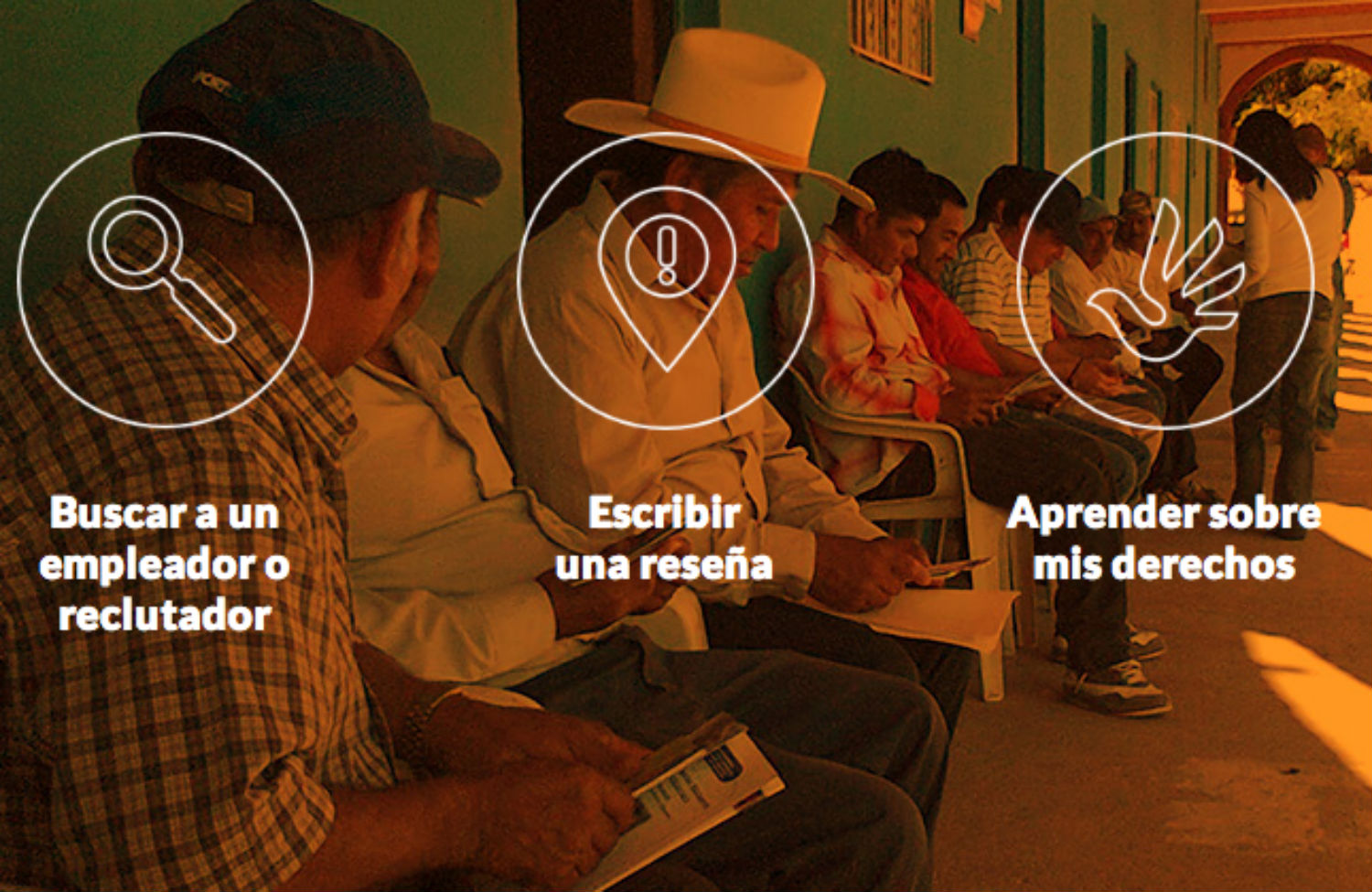 The US border with Mexico is described by turns as a primitive lawless frontier, or a dystopic militarized no-man’s land. Its technological architecture reflects its savage modernity—barren desert strips dotted with aerial drones and biometric sensors. But Fortress America now faces a disruption from the grassroots: a new tech tool is working to empower migrants rather than police them, helping workers navigate the labor laws and dodgy politics of an alien terrain.

The Contratados.org site meshes worker solidarity with digital technology in a user-friendly format—part pocket-sized know-your-rights training, part Yelp—with the the street-level sensibility of the workers’ centers that aid migrant workers on the ground in their communities. The program was built through a collaboration between progressive design groups Research Action Design and Studio REV-, and pro-migrant nonprofits including Centro de los Derechos del Migrante (CDM), an advocacy group, and the worker-led transnational activist network Migrant Defense Committee.

Contratados.org focuses primarily on “guestworkers” who are recruited on special labor visas to fill temporary jobs in the United States. Through the site’s app-like interface, workers access tools for tracking employers’ reputations, advice on avoiding abusive bosses, and resources for learning about labor regulations and connecting with advocates. While providing basic legal knowledge, the site also lets workers know they are not alone. This nascent social network, which is paired with informational comics and other media tools, may prove vital for workers who are typically cut off from their home communities and lack social supports outside their workplace.

Though Contratados.org can’t replace the crucial services of legal advocates or formal regulators, it can equip workers with tools for asserting control over their working conditions. With immigrants increasingly linked into mobile networks, the site reflects the technologization in transnational labor markets. We don’t think of the border as a high-tech place, but in recent years, the digital ether has mediated the many aspects of the flow of labor migration, from border smuggling routes to the media blast around student guestworker protests at Hershey’s Pennsylvania packing plant.

The targeted user base—the hundreds of thousands of contract workers imported on employment visas—is generally regulated through a patchwork of opaque laws and regulations under the Labor and State Departments. Drawn from the Global South through a shadowy international network of recruitment agents and labor brokers, they are extremely vulnerable to profiteers and labor traffickers. The lack of transparency keeps workers in the dark about the terms of their employment. As neoliberal indentured servants, these nominally “legal” imported workers are sorted into sector-based visa classes and funneled into various industries, ranging from nursing to low-wage farmwork and hotel service jobs. Since they are usually bound to a single employer, coercion and labor exploitation are routine.

Groups like CDM and National Guestworker Alliance have been working to organize visa-based workers as a unified labor force to campaign for reforms. Though the emergent movement has successfully pushed some policy changes and exposed crooked employers, formal oversight of guestworker programs remains anemic.

According to workers surveyed by CDM, nearly six in ten had paid illegal recruitment fees, about half had “accumulated debt to secure their jobs…and one in ten had paid fees to fraudulent recruiters who took their money and disappeared.” Even if they weren’t outright robbed, stories of false promises were common in the industry; by the time workers found out that they were cheated, they were left with little choice but to cling to an abusive job or risk possible deportation.

Contratados.org provides a forum where peers can rate bosses and recruiters anonymously. In one review, a worker describes a recruiter who charged exorbitant fees for a “fake visa.” Roped into the abusive situation, the worker reported having to “work without pay for two months” and eventually getting deported.

The beauty of the Contratados.org employer review feature is that it does not rely on any legal mechanism—the point is for workers to share information with one another so that they can make more informed employment decisions. Both guest workers and undocumented workers work within a system where they are at a power disadvantage due to their status, and we hope that Contratados.org will be a tool that all workers can use to increase their power in the labor market.

This can’t replace the role of a real labor inspector, but the program’s accessibility and personal nature—a handheld device can reach people in workplaces that organizers can’t visit in person—can be a key resource for workers who may be wary of exposing themselves to a legal intervention, including those are are undocumented.

Contratados.org is currently rolling out publicity efforts through its network of domestic and international advocacy organizations and doing outreach in workers’ communities. So in the end, organic word-of-mouth is still needed to get the tool in enough workers’ hands to build a critical mass of users. Yet projects like Contratados.org reflect the expanding horizons of grassroots labor organizing. Neoliberal labor markets have for years capitalized on digital technology and communications to expand corporate power and undermine workers’ rights, while national security forces use technology to militarize the border and impinge on civil liberties. Now from their phones, workers can, bit by bit, collectively resist government and corporate gatekeepers, building consciousness under the radar.