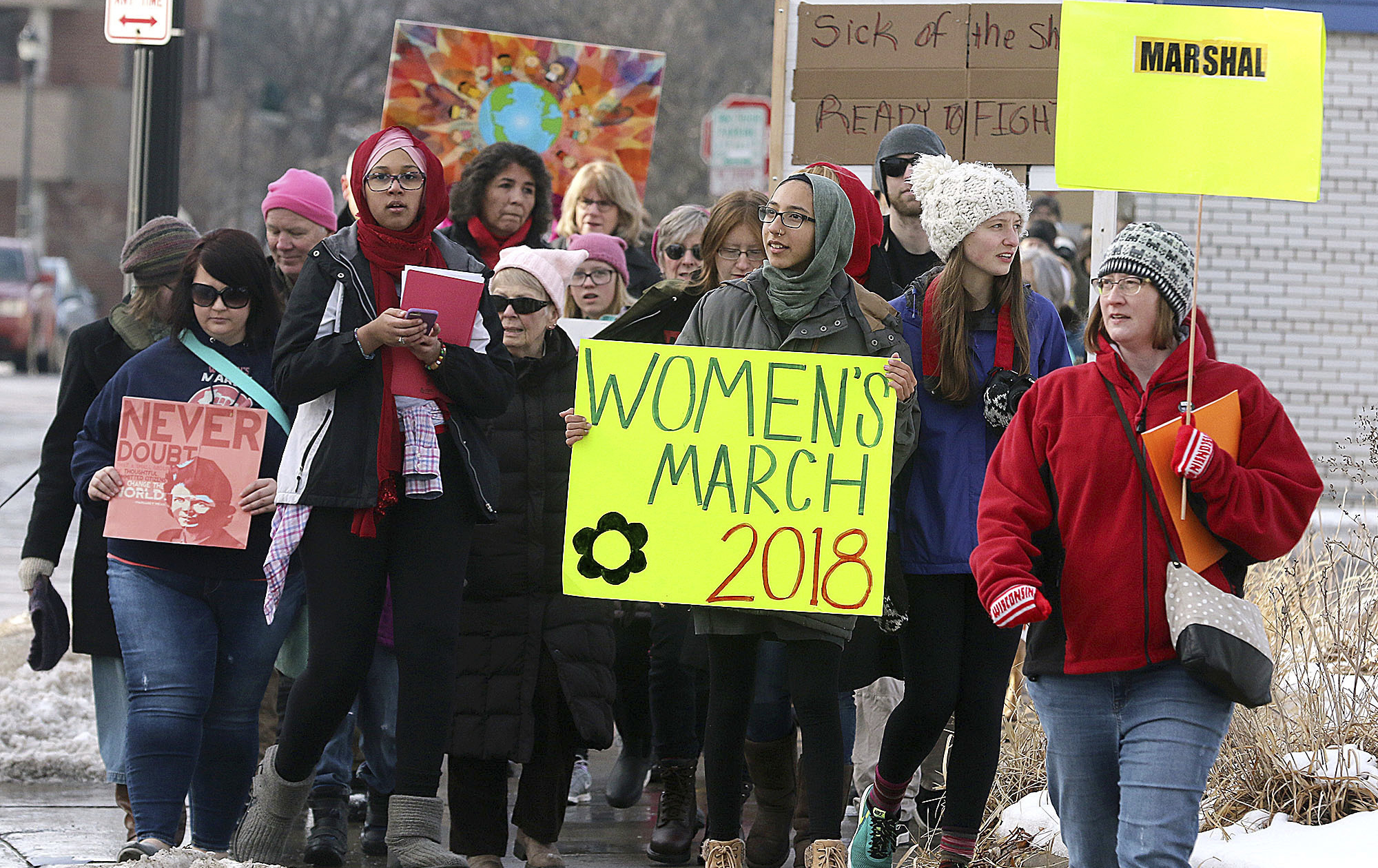 Having fueled the marches, the #MeToo movement, and a surge of women candidates now prevailing at the polls, women’s activism shows no signs of abating. Meanwhile, the Trump administration’s assaults on women—from pay equity to health care—are relentless, and Trump’s nomination of staunch conservative Brett Kavanaugh to the Supreme Court threatens women’s constitutional right to an abortion and access to birth control.

Women of color have long formed the progressive base, but as November nears, a question looms: How will white women vote? Will greater numbers of white women finally become part of a more enduring progressive majority? Or will old, structural pulls, including white women’s economic dependence on and personal relationships with, white men, maintain the status quo? The answers could lie in political journeys of women like Lynn Rankinen.

Rankinen has a short, graying blond bob and bright blue eyes. Her speech is peppered with long, flat, Upper-Midwestern vowels. Rankinen worked as a public-school speech-and-language pathologist for 34 years before retiring in 2015. The mother of two grown sons, she lives with her husband in a suburb of St. Paul, Minnesota, and is a member of a local Lutheran congregation. Although consistent majorities of white women have for decades voted Republican, women like Rankinen might just change that pattern.

Rankinen has always identified as a Democrat, but said she only recently became “political”—the result of her desire to become more engaged, post-retirement, and her outrage over Trump’s victory. In the summer of 2016, she got involved through her church with a local organizing group, ISAIAH/Faith in Minnesota, attending meetings in support of a safe- and sick-time ordinance in St. Paul. Post-election, her involvement with ISAIAH deepened, and Rankinen joined her local Indivisible chapter, the League of Women Voters, and a progressive social group, Drinking Liberally. This June, she attended her first Democratic Party convention as a “faith delegate.”

“It was just fabulous,” she said. “Exciting and uplifting. What we can do together is very powerful.”

But at home, politics is a source of isolation and pain. Rankinen’s husband voted for Trump. Their political views have always differed—they used to joke that they canceled each other out at the polls—but his continued support for Trump has shaken her. She used to think they disagreed on policy, but now questions whether they share the same values. “Even if we can somehow redefine our relationship, it is never going to be the same,” said Rankinen. “I can’t ever have the emotional intimacy that I once had.”

The political awakening of women like Rankinen matters. White women are the largest voting bloc, representing 69 percent of the women’s vote and 39 percent of all voters. If trends from the recent Alabama and Virginia elections are sustained, and increased turnout in communities of color is coupled with a surge of progressive white women voters, it could portend a more permanent political realignment. Donald Trump could do to white women what Pete Wilson did to Latinxs in California: drive them out of the Republican Party for a generation to come.

But this outcome is far from certain. Throughout history, including the white suffragist and feminist movements, white women have all too often aligned their political interests with those of white men. Moreover, white women are not a monolithic voting bloc; they vote very differently based on the interplay of several factors: heterosexual marriage, education, and religion. Rankinen’s political journey highlights how subgroups of white women—namely, single white women and college-educated white women—are already beginning to shift the “panorama of political possibility.” But it also reveals the personal shake-ups that drive, and result from, changes in political beliefs.

Moreover, the most promising models aren’t limiting their engagement to those white women who have been activated by Trump. Rather, they are engaging a range of white women—including those without college degrees, and often alongside white men and people of color. The core insight driving this kind of “relational” organizing is that most people’s political beliefs are formed and evolve through community building and joint action on issues—like safe and sick time, the issue that originally activated Rankinen. Progressive inroads with white women, including the non-college-educated white women and married white women who vote Republican at higher rates, requires with the kind of engagement that doesn’t view a vote as the ultimate outcome.

Doran Schrantz, executive director of ISAIAH/Faith in Minnesota, and her staff refer to people going from feelings of powerless to agency as “moving over the bridge.” The organizing Schrantz leads is time-intensive. ISAIAH works in racially, ethnically, religiously, and geographically diverse congregations and mosques across the state, bringing a moral and faith voice to political and policy issues. Women, both white and of color, make up more than two-thirds of ISAIAH’s volunteers.

Schrantz and her team have gained a number of insights into people’s political trajectories. White women, she said, have two distinguishing traits: caregiving and competence. “We see a lot of white women who are emotionally and spiritually exhausted because they are taking care of their husbands, their children, their church—everyone but themselves.” Schrantz noted that although women of color shoulder similar responsibilities, white women experience more guilt and shame around a perceived failure to perform. “Especially for middle-class white women,” she said, “everything has to look perfect.”

White women also frequently occupy roles as the “competent administrators of white male power.” Because such roles—the associate pastor, the women leading the church’s social-justice ministry—tend to be commissioned by men, white women become defensively focused on “how good of a job they are doing, not making errors, and enforcing the rules.” Moving white women over the bridge—which involves teaching them how to act in political solidarity with people of color—requires white women to stop seeing their political engagement as a form of “helping” or “serving” others and trying to “do everything right.” ISAIAH staff facilitates that process by posing questions: What do you want? What about your leadership? What is your experience of suffering? “We don’t tell white women to step back because they’re privileged,” Schrantz said. “We help them unpack their own interests so they can develop equitable relationships with people who have different experiences.”

Andrea Himoff, executive director of Action Utah, deploys similar strategies. Through living-room conversations about policy solutions carefully crafted to evoke LDS Church teachings, Action Utah activates its members—80 percent of whom are women, the vast majority of whom are white—to advocate on issues like health care, education, immigration, and environmental stewardship. By cultivating relationships, Himoff says, women realize they are part of large, silenced majority, and feel empowered to act. “In this moment, women care most about doing something.”

But these models are still not the norm. “Traditional efforts to organize women’s political power have been short-term and transactional,” said Jackie Payne, a veteran feminist activist who recently launched GALvanize USA, an organization designed to promote interventions for supporting white women’s progressive activism. “We have been asking women to individually defy the realities of their lives.” Payne recognized that the 2016 election was a cultural disruption that changed the calculus for many politically disengaged white women. As they “came out” as progressives post-election, they saw that they were not alone, even in conservative rural and suburban communities. “What we need,” she said, “are ways to identify those white women who are shifting and shiftable and help them build community.”

But questions remain. For many married white women like Lynn Rankinen, moving over the bridge and assuming a more public political identity can prompt changes in marital and family dynamics that are both empowering and painful. “I’ve had multiple conversations over the years with women about whether or not they are going to divorce their husbands,” said Schrantz. Often these tensions appear to be about time but actually reflect something deeper—women’s desire to focus on themselves and have a public purpose. Libby Chamberlain, the founder and chief content officer for Pantsuit Nation, an online private Facebook community of 3.7 million members, 85 percent of whom are women, has seen similar dynamics. “Women tell their husbands that they’re going to their sewing group,” she said, “when they’re actually meeting up with their local Pantsuit Nation chapter to plan a protest or phone bank.” Schrantz says that organizations like ISAIAH can often help women successfully renegotiate their marital roles. But not always. Catalina Morales Bahena, a lead organizer at ISAIAH who herself got divorced over the course of her own deepening engagement, said that’s not necessarily bad. “As women begin to demand justice in their public lives, they demand justice in their personal lives.”

Although effective, it is also not yet clear whether this kind of organizing can scale. ISAIAH organizes in more than 100 congregations or mosques—a significant number, but not enough to politically transform an entire nation, or even a state. Many organizing groups are even smaller, and relatively few have an intentional focus on white women. Chamberlain thinks that online communities like Pantsuit Nation can be part of the solution. “We offer our members an opportunity to see the world through someone else’s eyes, which builds political literacy and moves people from empathy to action—whether it’s talking with a neighbor, donating time or money, or running for office.”

Can light-touch relational work provide a sufficient on-ramp to a more enduring politicization? Or will white women go back to “business as usual” if the threat of Trump and his ilk subsides? Rankinen, for one, said she will maintain her political activism well beyond the midterms. Schrantz agreed there is opportunity in the moment. “I think you can help politicize people beyond ‘I hate Trump,’ and into an understanding that they are part of a hundreds-of-years-long struggle over whether we are really a democracy at all.” Second-wave feminism helped millions of women recognize that the personal is political, to stop self-blame, and to act. For today’s newly politicized white women to become an enduring force for equity, today’s intersectional feminism must help them navigate the reverse, developing new strategies for addressing the ways that the political is also deeply personal.