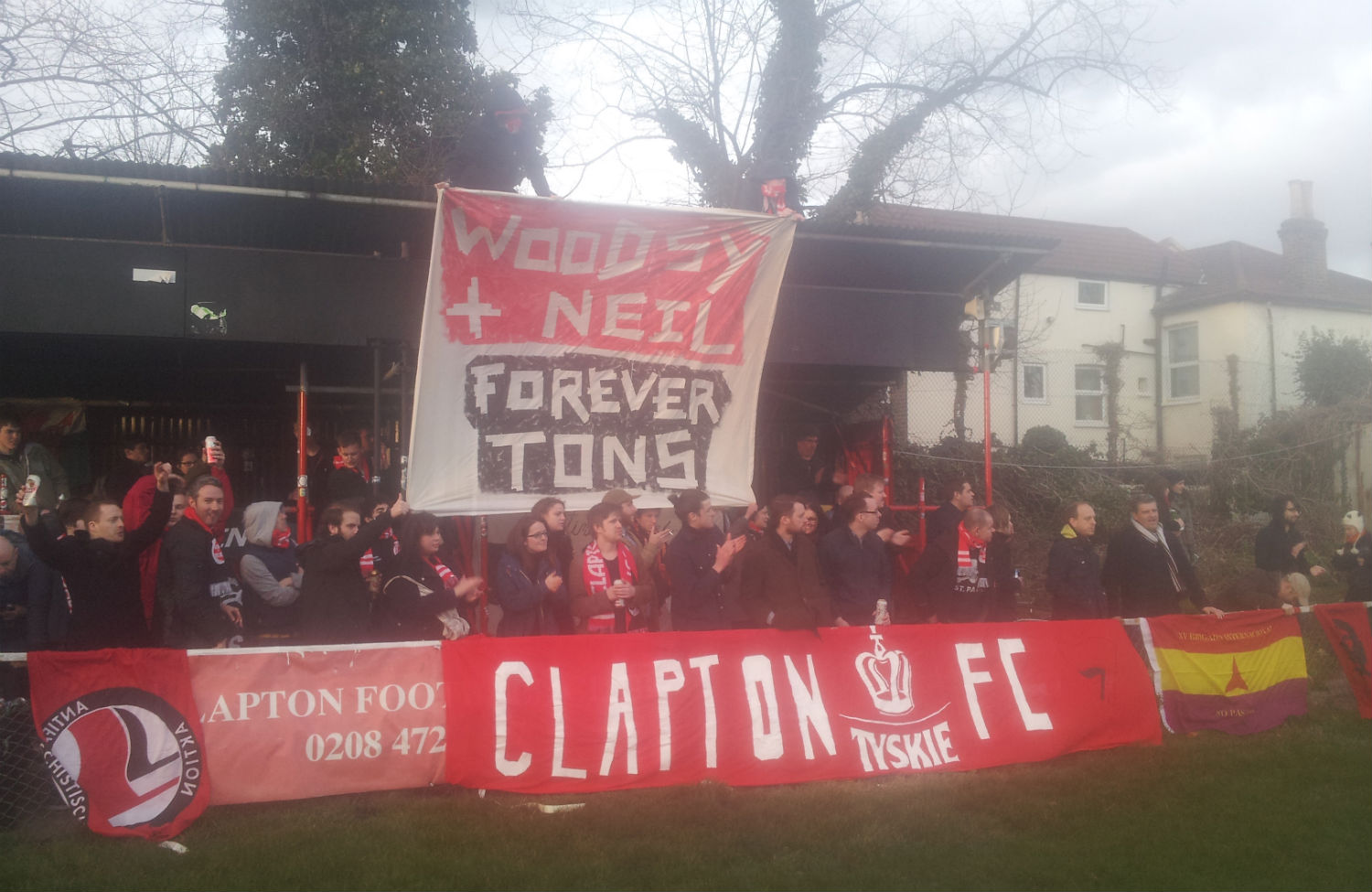 I recently moved a stone’s throw away from Emirates Stadium in London, where Arsenal Football Club plays (“football” is what we call soccer here in the UK). I can hear the crowd roar and chant when the wind is blowing in the right direction, and see the glare of the flood lights on my way home at night. And yet, it’s inconceivable that I would be able to afford to enter this modern-day temple of corporate football. Even the cheapest ticket will cost you about $66. Perhaps that’s why, on March 15, I decided to check out another London football club, Clapton. There, in the neighborhood of Forest Gate, the spark of a football revolution is brewing. In the shadow of the City of London a group of football fans are rebuilding a culture that neoliberalism has sought to destroy.

A member of the Essex Senior League, Clapton FC plays its home games at the historic Old Spotted Dog Ground in Forest Gate, which has been the team’s home field since 1888. In order to get to the pitch you have to pass by the boarded-up and derelict Old Spotted pub and walk through a tire mounting shop. Entry costs $10; students and people under 18-years-old pay just $5. There are none of the usual security checks and you can stand anywhere you choose. Once inside, at first sight it looks like any other ground. The official stands with its shell seats are empty. But across the field, behind the players’ benches, is an old scaffold structure with a tin metal roof painted red and black: the colors of the Scaffold Brigada—Clapton FC’s supporter group—and traditionally the colors associated with Spanish anarchism.

Formed as “Downs FC” in 1877 and re-named Clapton Football Club in 1878, the club’s history is tied up with London’s East End—a first point of arrival for Jewish, Bengali and other subsequent waves of immigrants. Forest Gate, in particular, has a fraught history tied up in racism and fascism—2015 will mark the 30th anniversary of the Newham Seven case, in which the police sided with a group of skinheads who had attacked young immigrants. Over time, football became an outlet for leftists of all stripes,  and what started as a couple of friends going to Clapton games, waving banners and chanting songs, has grown into a network of “Ultras,” passionate and politically-minded fans, including locals, punks, students and political activists who call themselves the Scaffold Brigada.

When I first arrived at Old Spotted Ground, never would I have imagined that I’d reconnect with two activists whom I hadn’t seen since the 2009 Copenhagen Climate Change Conference, or talk to punks who have been playing gigs with their bands since the 1980s. People come from as far as Brixton and Surrey to watch a football match that will never be shown on television.

“After 24 years of local campaigning against racism, fascism and police brutality,” says political activist Kevin Blowe, of the local anti-racist organization the Newham Monitoring Project, “I’m still astonished about the idea that a group of football fans on my doorstep…are backing a rejection of racism that isn’t just a liberal ‘let’s be nicer to each other through sport’ message, but deliberately associate themselves with a militant, direct action tradition.”

“I come to Clapton because of the songs, atmosphere and camaraderie,” Nisha Damji from South London adds. “Being brown and a woman, knowing that Clapton is antifascist makes me feel welcome and included.”

There are also those who love to watch football and have been priced out of corporate arenas. “What struck me about [Clapton] is that its identity is set not by the management but by the fans,” says Nathan Bolton, one of the many new supporters of Clapton FC. “Nowadays, most grounds are identical, over-priced and with no atmosphere. What’s happening at Clapton is an attempt by fans to model a club along their own lines.”

Many from overseas have come to watch Clapton as well. Recently I met a couple from Leipzig, Germany, where in 1999 twenty anti-racist and politically-minded football youths started a club called Roter Stern Leipzig. Now it’s a club with more than 500 members, including the couple I met. They run initiatives for migrants in the local area, and organize different sporting teams, events and demonstrations.

Originally in Italy and now throughout the world, politically-minded football fans commonly referred to as Ultras are some of the most dedicated activists and street fighters. In Egypt, during the eighteen days leading up to Mubarak’s resignation in 2011, ultras put their years of experience organizing against draconian police harassment and brutality to use. In Turkey, ultras of rival football fans united against the vicious crackdown on environmental protesters during the Gezi Park protests in 2013. More recently, they’ve organized demonstrations against Prime Minister Erdogan’s Twitter ban.

While Scaffold Brigada still has a long way to go, the fan base is growing and on match days the number of supporters can swell to two hundred. Fans talk over their beers while children mess around and sometimes even lead the chants. Desmond Dekker’s “The Israelites” is appropriately changed to “the Claptonites.” While there is banter between the supporters and the opposing team, there are none of the usual sexist, homophobic or racist slurs that one tends to hear at football matches. Instead the crowd frequently sings anti-fascist songs, eulogizing, for example, two fallen heroes of the left: “There’s only one Bob Crow and Tony Benn, Benn, Benn, Oh, Tony Benn, Benn, Benn.”

At a time when working class communities are demoralized, fragmented and under siege from aggressive austerity policies, Clapton FC’s supporters are part of this new kind of football culture and a new type of left. During a recent game against Sporting Bengal, supporters teamed up with the Newham Food Bank. They called on people to bring non-perishable goods to be distributed to migrants and refugees.

Contrast this to today’s football clubs in the Premier League or Championship whose working class heritages are reduced to rhetoric, another opportunity to sell shirts with logos, merchandise and memorabilia. West Ham United’s club crest, featuring crossed shipbuilding hammers, is nothing more than a reminder of a past era. With ticket prices at around $80, you are more likely to sit next to a City of London banker than a Ford Dagenham worker. Even at Leyton Orient, just down the road from West Ham’s Upton Park, ticket prices exceed $35.

“Clapton, to me, is what football is all about: a grassroots game, standing with a group of like-minded anti-fascists supporting their local team,” ponders Steve Flack, a Clapton supporter and singer in a 1980s punk band, Liberty. “Professional football has become a multi-million pound business for the rich, sadly.”

I have often reminisced about the early German SPD, Europe’s largest social-democratic party, at the turn of the 20th Century. From bicycling clubs to choirs, it was successful in creating a genuine working class culture. Its day-schools taught workers how to read and write, and popularized ideas associated economic justice. Most importantly, perhaps, it recognized sports and culture and as vehicles to transmit that message of social justice. The fans of Scaffold Brigada are heirs to this tradition.

During the first game I attended, Clapton’s Senegalese goalkeeper helped the team to secure a draw against the dominant team from nearby Enfield. The other two games I attended ended with a 0-1 defeat and 2-1 victory. But it isn’t really about the football, and it really isn’t about winning either. At a time when the left has forgotten what it means to win, it should look to Clapton and join in.