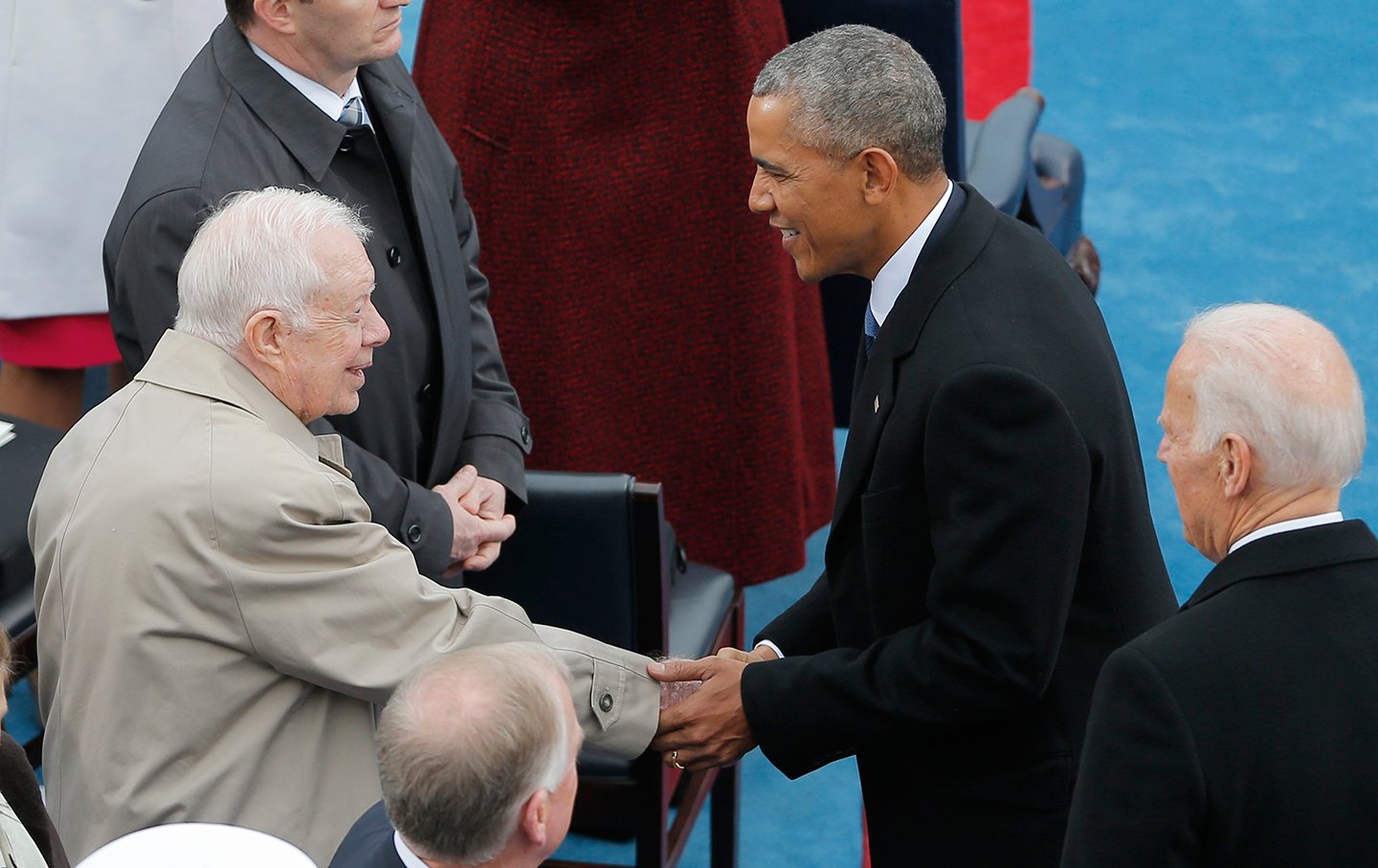 For more than 35 years, Jimmy Carter has set the standard for what a former president might do upon leaving office, working with Habitat for Humanity, establishing the peace-and-justice-oriented Carter Center, and lining up alongside Nelson Mandela, Kofi Annan, and Desmond Tutu in The Elders. He’s made mistakes, such as getting funding from the Bank of Credit and Commerce International (BCCI), a criminal enterprise. And, from time to time, he’s weighed in on politics, writing a book called Palestine: Peace Not Apartheid—which drew brickbats from the Israel lobby, with some denouncing Carter as anti-Semitic—criticizing the war in Iraq, and criticizing President Obama for targeted assassinations and “abandoning [America’s] role as the global champion of human rights.”

It remains to be seen whether Obama, who wants to keep his hand in politics, can live up to Carter’s standard. So far, it’s not auguring well, as the following survey of Obama’s post-presidency activities reveals.

As an ex-president, it doesn’t appear that Obama will be joining union picket lines anytime soon, or marching in the streets with protesters. As president, he adopted a centrist, no-drama stance, nodding occasionally to the Democratic Party’s progressive left but planting himself squarely in the neoliberal, Wall Street–oriented faction of the party’s establishment wing.

Elected with a massive mandate in 2008, and taking office with Democratic majorities in both houses of Congress, Obama had an opportunity to create a New Deal–like national program on jobs and the economy in response to the financial meltdown. Instead, he limited himself to supporting bailouts for the crumbling financial sector, refusing to prosecute the Wall Street wizards whose fraud and shenanigans caused the crisis, and all but ignoring struggling homeowners whose mortgages were underwater. Amid calls for Obama to adopt an FDR-like approach to the economic crisis, the White House and the Treasury Department settled on a stimulus package far smaller than what progressives would have liked. And, even while engineering the Affordable Care Act, which enabled millions of people to secure health insurance, Obama failed to challenge the insurance industry by signaling any support for a single-payer, Medicare-for-all approach.

Perhaps that’s because Obama’s preferred circle of friends were those very bankers and well-heeled businessmen who funded his billion-dollar election efforts. In any case, that’s who he’s hanging out with now.

The Obama Presidential Center, which is to include a library and a museum, could cost as much as $1.5 billion.

Take, for instance, Obama’s plans for a presidential library in Chicago. According to NBC, the cost of the would-be Obama Presidential Center could be a staggering $1.5 billion, including its proposed museum. And, though fundraising for the project has yet to begin, NBC reported that Obama will soon launch a major fundraising drive.

The multimillion-dollar Obama Foundation, which is the prime mover behind the Obama presidential library, is chaired by Obama friend Martin Nesbitt, a wealthy Chicago-area real-estate mogul and partner of Chicago billionaire Penny Pritzker, the Hyatt heiress who was Obama’s secretary of commerce, with whom Nesbitt co-founded The Parking Spot in the late 1990s. Founded in 2014, the Obama Foundation includes a range of investment-bank executives and hedge-fund managers on its board, from John Doerr, the 105th-richest person in the world ($5.3 billion); the ironically named J. Kevin Poorman, CEO of PSP Capital Partners, which Poorman co-heads with Pritzker; John Rogers of Ariel Investments, LLC; and Michael Sacks, CEO of GCM Grosvenor Capital Management, a close ally of Chicago’s mayor, Rahm Emanuel.

Obama has also hired a top-level literary agent and a representative for what are certain to be six-figure speaking engagements. He will be represented by the Harry Walker Agency, the firm that managed to win Hillary Clinton her Wall Street speaking gigs that brought her millions of dollars while simultaneously undermining her electoral chances.

In another sign that the Obamas aren’t too concerned about perceptions, upon leaving the White House the former first family took billionaire Richard Branson’s private jet to a Necker Island getaway in the British Virgin Islands, according to the not exactly working class–oriented magazine Town and Country. The same magazine also reported that in New York, Obama powwowed with über-wealthy James H. and Marilyn Simons, who donated $700,000 to the Obama Foundation.

Interestingly, James Harris Simons was the founder and board chair of the hedge fund Renaissance Technologies. In 1993, he recruited Robert Mercer to the firm, and today Mercer—Donald Trump’s chief financial backer and the genius behind Cambridge Analytica—is the company’s co-CEO. Simon and Mercer worked together until Simon left the firm in 2009.

According to his spokesman, Obama did support the wave of protests opposing Donald Trump’s travel ban.

So what’s Obama going to be doing? According to the foundation, he and Michelle will focus on education and good citizenship. In a video message on YouTube, the Obamas asked viewers to tell them what they want them to work on. “We want you to tell us what we should be thinking about,” said Michelle.

Though he has so far been mostly quiet since leaving office, Barack Obama’s spokesman did issue a statement on January 30 in which the former president is quoted as supporting the wave of protests and opposing Trump over the immigration ban:

President Obama is heartened by the level of engagement taking place in communities around the country. In his final official speech as President, he spoke about the important role of citizen and how all Americans have a responsibility to be the guardians of our democracy—not just during an election but every day. Citizens exercising their constitutional right to assemble, organize and have their voices heard by their elected officials is exactly what we expect to see when American values are at stake. With regard to comparisons to President Obama’s foreign policy decisions, as we’ve heard before, the president fundamentally disagrees with the notion of discriminating against individuals because of their faith or religion.

Perhaps there are clues in the transcript of Obama’s final news conference as president, on January 18, about what he was thinking about doing after leaving office. In it, he refused to say anything critical about Donald Trump—even as dozens of Democrats in Congress were proclaiming their intent to boycott Trump’s inauguration—other than to say, when commenting about the differences between his vision and Trump’s, “I don’t expect that there’s going to be, you know, enormous overlap.”

Asked if he plans to stay involved in politics, Obama said: “I want to do some writing. I want to be quiet a little bit and not hear myself talk so darn much. I want to spend precious time with my girls. So those are my priorities this year.”

One hopeful sign: In that news conference, Obama did deliver a pungent comment on inequality in America and on the concerns of people who feel left behind by politics and politicians. Here’s one extended passage:

I worry about inequality because I think that if we are not investing in making sure everybody plays a role in this economy, the economy will not grow as fast and I think it will also lead to further and further separation between us as Americans—not just along racial lines. I mean, there are a whole bunch of folks who voted for [President-elect] Trump because they feel forgotten and disenfranchised.

And you don’t want to—you don’t want to have an America in which a very small sliver of people are doing really well, and everybody else is fighting for scraps, as I said last week. Because that’s oftentimes when racial divisions get magnified, because people think, well, the only way I’m going to get ahead is if I make sure somebody else gets less; somebody who doesn’t look like me or doesn’t worship the same place I do. That’s not a good recipe for our democracy.

Was the outgoing president acknowledging that he realizes the Democrats were ambushed by a phony populist who, despite being a billionaire who lives on Fifth Avenue, won the support of people who felt “forgotten and disenfranchised”? Was it an oblique critique of Hillary Clinton’s tone-deaf campaign, which seemed to ignore Rust Belt workers, union members who lost jobs to NAFTA and to the decline of the coal and steel industries, and others? Is it a sign that Obama, despite hobnobbing with the billionaires who support the Obama Foundation, could eventually emerge as a populist leader himself?

Stranger things have happened, and it’s not inconceivable that the Obamas might someday join the progressive wing of the Democratic Party. By backing Tom Perez over Keith Ellison as chair of the Democratic National Committee, however, Obama made it pretty clear that it won’t be happening anytime soon. And, given a track record that includes eight years in the White House and a political career that goes back to the 1990s, it doesn’t seem likely that Obama will hook up with the Sanders-Warren wing of the party anytime soon. He’s still popular, leaving office with a sky-high 63 percent approval rating. Let’s hope he doesn’t waste that potential political clout. If he does, that would be a shame.