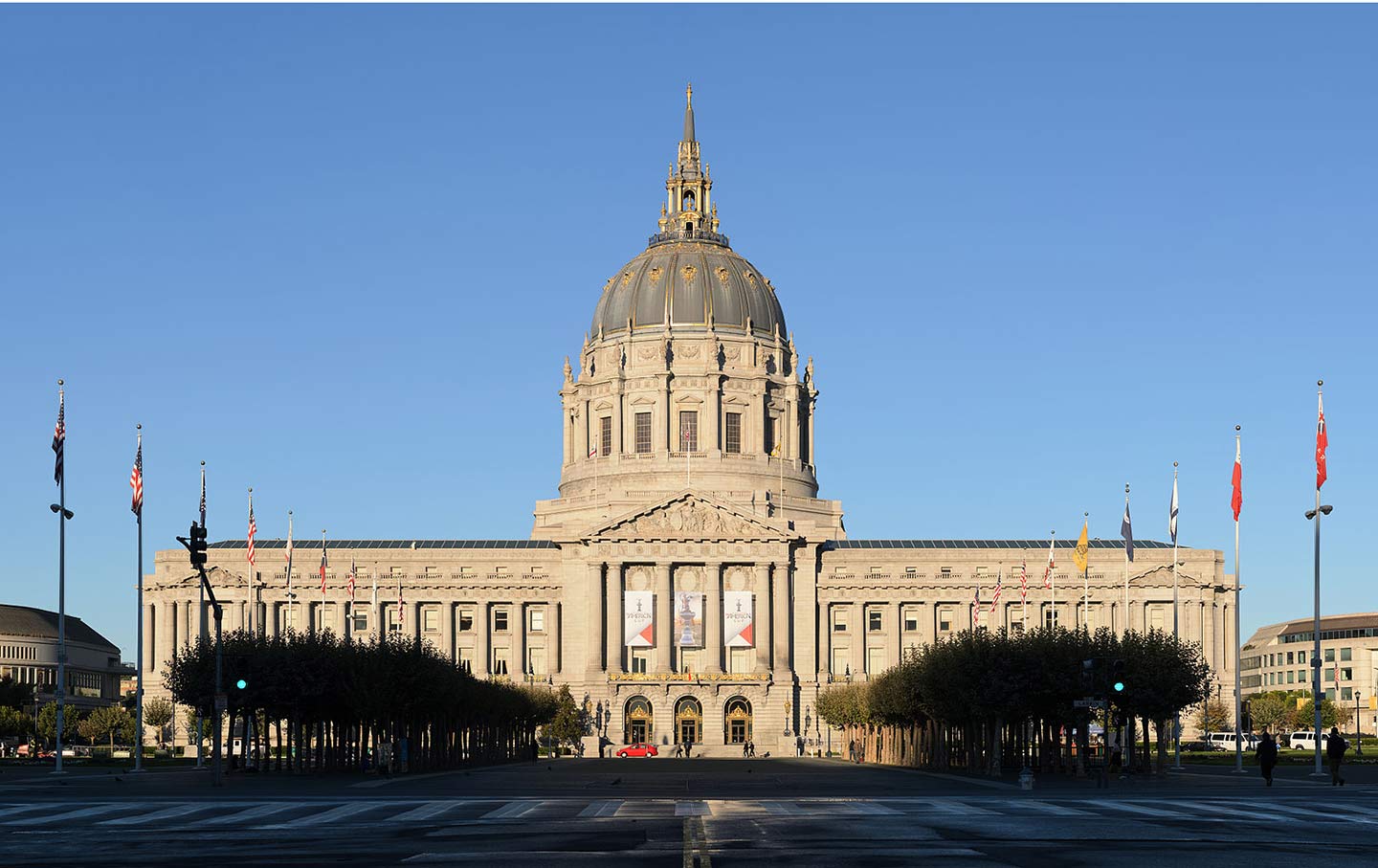 Donald “Grab ’Em By the Pussy” Trump is proving to be just as cruel a president as reproductive-rights advocates feared. In the course of his campaign, Trump transformed himself into a rigid pro-life candidate; chose a vice president who had, as a Representative, written an amendment to defund Planned Parenthood; and famously suggested that women should be punished for having abortions. (During a less-covered moment of that same interview, Trump said men who get women pregnant should not be: “Different feelings, different people,” he reasoned.) Now, just nine months into his presidency, the Trump administration has rolled back President Obama’s contraceptive-coverage guarantee, attempted to eliminate essential health benefits including maternity and newborn coverage, and strongly endorsed the House bill banning abortion after 20 weeks of pregnancy.

Yet, while the news from the top is undeniably grim, city governments and grassroots advocates across the United States have been busy holding the line on reproductive rights—and even moving it forward. From San Francisco to Chicago to Boston, cities are enacting legislation and creating programs designed to support reproductive health and justice. And these efforts, which are outlined in a new reproductive-freedom index by the National Institute for Reproductive Health (NIRH), offer a powerful counterpoint to the narrative of retreat and retrenchment playing out across state legislatures and in our nation’s capital.

“There’s no question that we need to be exceedingly vigilant right now given attacks by the federal and state government,” says Andrea Miller, president of the NIRH. “But we would do ourselves a real disservice to let that blind us to the power and potential of local governments.”

To measure something as massive and dynamic as “reproductive freedom,” NIRH examined 40 of the country’s most populous cities, measuring their policies against 37 weighted indicators. Taken together, these indictors paint an encompassing picture of reproductive freedom—one that includes everything from access to sexual-health education to anti-discrimination polices on gender identity to a $15 minimum wage, as well as a woman’s fundamental right to choose.

The index’s highest-scoring cities were exactly those you might expect: Los Angeles, San Francisco, and New York City, which is to say coastal, wealthy, and historically progressive cities, each received 4.5 stars, out of a possible five. These cities check all the essential boxes—they protect abortion-clinic access, fund reproductive health, support families, take a stand—but also offer innovative programs that expand the notion of what it means to fight for reproductive freedom.

San Francisco, for instance, has worked to lessen the influence of so-called “crisis pregnancy centers” (CPCs), where pregnant women go to pursue what they think are abortion services—but which CPCs do not, in fact, offer. Instead, when a woman who wishes to terminate a pregnancy arrives at a CPC, she is manipulated in a variety of ways, from being shown graphic photos to being given medically inaccurate information. To counter these deceptions, San Francisco passed an ordinance in 2011 prohibiting CPCs from making false statements or putting out misleading advertising.

Can Supervised-Injection Sites Stem the Epidemic of Opioid Deaths?

Meanwhile, several hundred miles to the south, in Los Angeles, prison justice advocates from the ACLU and elsewhere have been working with the Los Angeles Sheriff’s department to make sure that incarcerated women have access to reproductive health care, including abortion services. These efforts have spawned a special unit for pregnant and post-partum women, as well as pilot programs for lactation and doula care.

As for New York City, it famously pioneered a Residency Training Initiative (RTI), which established abortion training and education for medical residents working in the city’s sprawling public-hospital system. It’s also among several cities that are training their attention specifically on the needs of young people, who often enjoy the fewest protections and the least recourse when it comes to reproductive freedom. As many teenagers don’t drive or control their schedules, these cities are working to bring reproductive-health services that have long been offered at public clinics and private doctors’ offices into high schools. A New York City program helps teens access effective, long-term contraception like IUDs at certain School-Based Health Centers (SBHCs). New York City has 153 SBHCs, while cities like Nashville, Richmond, and San Antonio have none.

But it’s not just the big, progressive places. While many of the usual-suspect cities continue to lead the way, a number of Midwestern cities, particularly Columbus, Minneapolis, and St. Louis, have been making significant progress in states that have traditionally been less receptive to a reproductive-rights agenda. These cities don’t necessarily have high comprehensive scores, but the gains they have achieved are harder-won—and provide a concrete roadmap for policy-makers and advocates in other resistant states.

“In many instances, the federal government sets the floor and local governments set the ceiling,” explains Amanda Allen, senior state-policy and advocacy counsel at the Center for Reproductive Rights.

Ohio has long been one of the most hostile states in the country to abortion rights. It was the first state to pass a ban on dilation-and-extraction abortions back in 1995 and has carried on apace since. The 2013 state budget bill, for example, prohibited state-funded rape-crisis counselors from connecting rape survivors to resources that would help them terminate an ensuing pregnancy.

And yet cities like Columbus have found ways to protect access to abortion. When aggressive anti-choice protesters outside local Planned Parenthood sites harassed patients (police calls reporting harassment at these sites more than tripled between 2011 and 2015), the Columbus City Council unanimously created a 15-foot buffer zone around these centers.

More recently, in February, St. Louis’s Board of Aldermen passed an ordinance to protect city residents from discrimination based on their family-planning and reproductive decisions, including abortion. The need for an ordinance emerged out of stories collected by NARAL canvassers. These included the story of a woman who said she was fired from her job at a VA hospital after having a miscarriage, as well as stories from other St. Louis residents who worried about being seen picking up birth control at the pharmacy and then getting evicted by their landlords.

In Missouri, which instituted a 72-hour waiting period between having a consultation about abortion procedure and receiving one in 2014, each win is a big win. There are only three clinics, which provide abortion services in the entire state; there used to be one. Each year, dozens of anti-choice bills are introduced in the state legislature. Missouri’s state government and the Catholic Church pushed hard to cripple St. Louis’s non-discrimination effort, and the archdiocese has since sued to overturn the ordinance. But city leaders and advocates are standing strong.

“People don’t pay attention to St. Louis because they think we’re in a white-man state and we’re never going to win, but we are leading the resistance on so many levels,” says Alison Dreith, executive director of NARAL Pro-Choice Missouri. Cities like Columbia and Kansas City, Missouri, are following St. Louis’s lead.

Meanwhile, even the city with the poorest record on reproductive rights has something to teach. Jacksonville, Florida, was the only city to receive the NIRH’s lowest score: one star. The city provides no funding for abortion, family planning, or STI prevention; it has passed no essential anti-discrimination ordinances; and its public schools teach abstinence-only sex ed. But in February, the city of Jacksonville managed to ban discrimination based on sexual orientation or gender identity by employers, housing owners, and businesses. “What that shows us is that cities like Jacksonville can do more, and we encourage them to,” Miller says.

The victory in Jacksonville did not come easy. It took seven years of dedicated organizing—and one failed vote in 2012—to pass the legislation. What ultimately enabled the bill’s success was the creation of a broad coalition that included unlikely allies in the business and faith communities, says Dan Merkan, policy director of Jacksonville Area Sexual Minority Youth Network. “The business community is pretty pro-Republican, but they want to make Jacksonville competitive, and one way to do that is to keep our laws in line with other cities that are trying to draw talent,” Merkan explains. By appealing to business leaders, who could then appeal to City Council members, coalition members leveraged each of their personal connections.

“The most important thing is for advocates to deeply understand the body that makes the decisions and build relationships with those people, even before they get into office if possible,” Merkan says.

Still, for all the strides cities have made, there’s much more than can do, and will need to do, to protect reproductive rights, health, and justice. Even the cities that shined brightest on the NIRH index did not receive a perfect score. So the NIRH offers a blueprint for a “model city,” with tangible suggestions for how local politicians might move their communities forward. These suggestions include ensuring undocumented people are able to access reproductive services without discrimination or fear; putting policies in place to protect the reproductive health of nail-salon workers, who are exposed to dangerous chemicals; creating more convenient and sanitary spaces for those who wish to breastfeed; and centering LGBTQ youth in policy-making. They also recommend building strong relationships and partnerships with abortion-clinic staff.

These initiatives will come more easily in some cities than in others, and they will require real effort—organizing, mobilizing, strategizing—in every place. But the popularity of these programs once implemented underscores a critical yet under-discussed reality: the majority of Americans believe in reproductive-service provision, and 57 percent of Americans believe abortion should be legal in all or most cases. This is 10 percent higher than when President Obama took office in 2009 and highlights the fundamental disconnect between the average American’s views and the views of those Republican politicians who control women’s fates. Other rights, like access to subsidized contraception or health insurance that covers maternity care, enjoy even broader public support.

The fact remains that policies that enhance reproductive freedoms are popular among individual citizens. Trump’s merry band of mouth-frothing anti-choice extremists is loud and loaded, but it is not large. City governments, supported by grassroots activists, are uniquely positioned to enshrine the will of the people into local law. And now they have a comprehensive map for how to do it.