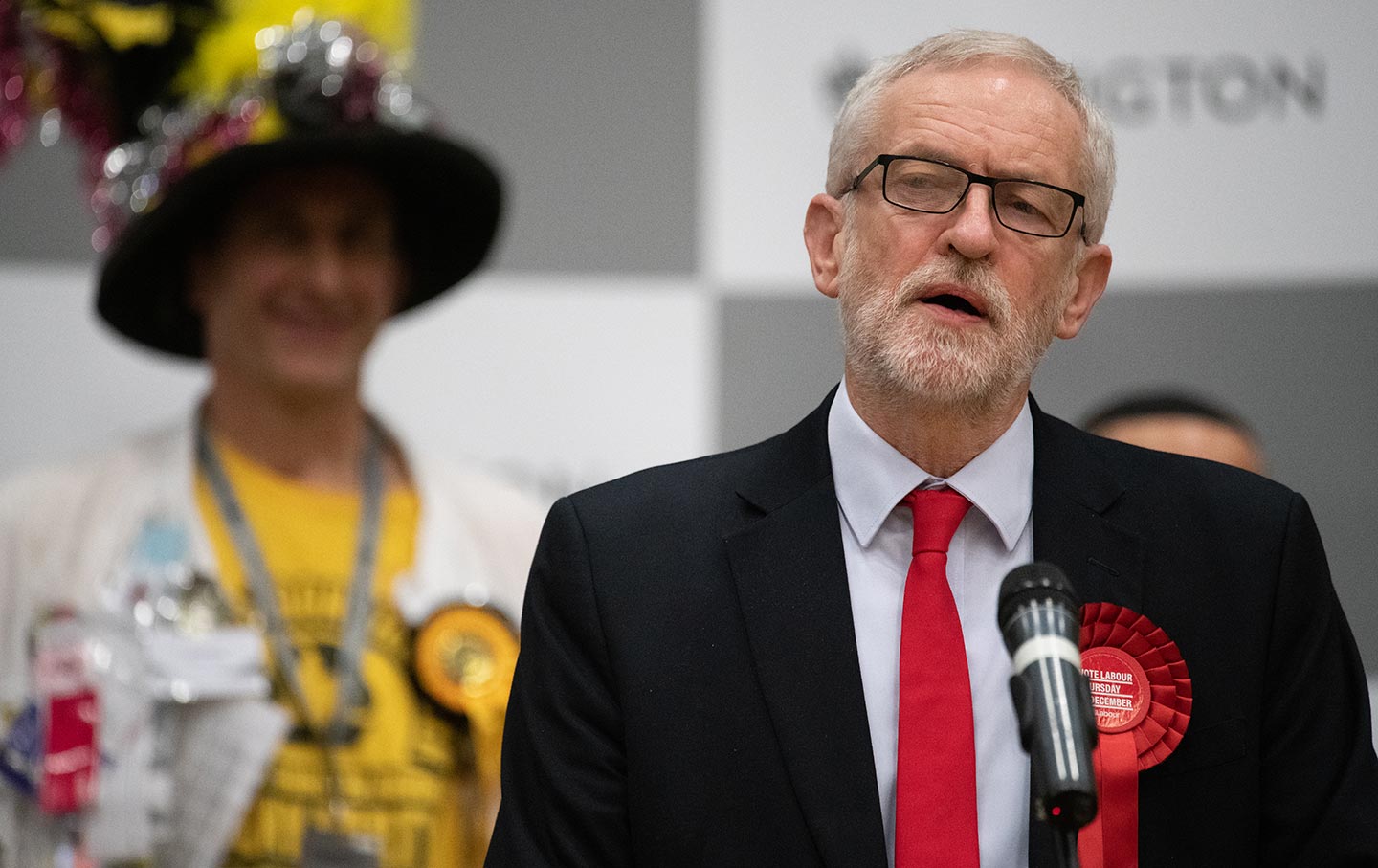 Days after a landslide victory in last week’s snap election, a group of five new Conservative MPs from England’s northeast tweeted a picture of their arrival in London to start work in Parliament. Wearing scarves in Conservative blue and bearing the description “team Tees”—a region that, historically, has been resolutely Labour—this group photo captured the utter, desolate shock of what had just happened to Britain’s Labour Party.

It was a catastrophic defeat. And a catastrophic majority government gifted to the Conservative party, which, led by Boris Johnson—and purged of pesky moderates—now runs on a model straight from the nativist-right playbook that is proving so effective for authoritarians around the world. In the small hours of Friday morning, as the election results came in, seat after rock-solid Labour seat in the north and the midlands fell to the Conservatives: Blyth Valley, Workington, Darlington, Leigh, Ashfield, Bishop Auckland, Bolsover, Sedgefield, Stoke on Trent. Fifty-nine seats nationwide, mostly Brexit-voting, postindustrial towns, some swinging to the Conservatives in double digits, many having only ever previously returned Labour parliamentarians.

The final counts leave the Conservatives with a majority of 80, the largest since 1987’s win for the party led by Margaret Thatcher. Labour lost 8 percent of the vote, over 2 million people since the 2017 election. Now, a punishing hard Brexit will happen—“Thatcherism on steroids,” as the departing Labour leader Jeremy Corbyn described it. The very communities that might have benefited from Labour’s socioeconomic program designed to tackle rampant inequalities are the ones likely to suffer most under a hard-right Conservative party.

As much as Labour tried to get the campaign away from Brexit—an impossible issue for a party with voters in both Leave and Remain camps—this election did become a proxy on the subject. Once the Brexit party stood down candidates to give the Conservatives a free run, Johnson’s party hoovered up the Leave vote, while Remainers splintered across several progressive parties. The relentlessly repeated Conservative message that it would “get Brexit done” (itself one of many lies pumped out by the party) appealed to both sides, speaking to a general weariness and desire to get the thing over with. Labour lost 52 seats that voted to Leave and eight voting to Remain—causing many, in the blame-game aftermath, to say it was the party’s recent switch to support a second referendum on a Brexit deal that caused the exodus of electoral support. But overall, the party lost more Remain than Leave voters—and some data-crunchers suggest that had the party managed to hold on to its Remain base in Leave seats, these would not have fallen to the Conservatives. Conservatives only increased their vote share by 1 percent—what swung this election was Labour losing so many voters, who either switched to other parties or stayed at home. Meanwhile, some 3 million Leavers who did not vote the 2017 election cast their ballots this time around.

After last week’s defeat, Labour shadow chancellor John McDonnell said Brexit was “the horns of a dilemma we were on.” And it’s true that Labour had no good options on the issue. But the party’s lack of clarity was potentially worse than the policy in itself—delivering the pain of picking a position with none of the gains. Earlier this year, polls showed Labour bleeding support to Remain parties and, after much foot-dragging, Labour shifted to a second referendum policy at its annual conference in September. That left little time to explain or rally support for the shift. And Corbyn’s Brexit triangulation had the effect of diminishing his credibility as a refreshingly straight-talking politician. Add to that the context in which Labour was operating: a political climate poisoned by far-right narratives on Brexit for three years, casting the endless parliamentary impasse as a metropolitan elite betrayal of the referendum vote.

As for Corbyn himself, he went into the election with the lowest popularity ratings for a leader since the 1970s. Polling shows he was the main reason that former Labour voters withdrew their support this time. There are flaws you can point to: his equivocation on Brexit, the often lackluster or stroppy demeanor in media interviews, the sluggish and tone-deaf response to the party’s anti-Semitism problem. But animosity toward him—in particular among an older white male demographic—seemed to coalesce around a constructed version of “Corbyn,” painted as a terrorist-sympathizing Britain-hater. All Labour leaders are demonized in Britain’s mostly right-leaning newspapers—former leader Tony Blair was actually given demon eyes. But the frequency with which right-wing attack lines on Corbyn were repeated verbatim on the doorstep suggests a persistent negative message spread though the press, the Conservative campaign, and on social media. Labour canvassers who questioned this perception of him on the campaign trail often encountered as its fuel the imperial nostalgia so beloved of the Brexit movement, or bigotry around Muslims or immigration.

With the party now focused on selecting a new leader and regaining those lost voters, some have revived an easy narrative about needing to appeal to “socially conservative” white working-class voters in left-behind towns—similar to a common critique of Democrats following Trump’s election. But this is a mistake on several fronts, not least that this values set belongs to the actual Conservatives and has no place among progressives. Minority voters are Labour’s core supporters and cannot be thrown under a bus—especially not at a time when Johnson’s victory has, entirely predictably, unleashed far-right hatred on the streets, at which point solidarity is the only appropriate response. Labour won majority support from all voters under the age of 46 in this election—among them, working-class people in precarious work, zero-hours contracts, and insecure housing. It’s true that the party’s voter base has fractured, but this decline has been in motion for decades, across neglected communities in postindustrial parts of the country with ageing populations and where previous ties to the Labour movement—working clubs, or trade unions—have shattered.

Neither does the solution for Labour lie in shifting toward the center; post–financial crash, in the midst of a climate crisis, there is no place for policies that tinker around the edges of a failed economic system, rather than rewiring it completely. Time and again the leftward tack taken under Corbyn has proved popular in polling—elements of it have even higher support following this election campaign. But public appetite for policies such as a higher tax on the highest earners, renationalization of energy and rail, and Labour’s green new deal did not translate into support for the party because there was little trust in Labour’s capacity to deliver. It makes no sense to shoot the message, which the party has now worked into impressive policy detail—a blueprint for a fairer, more equal, green and productive Britain. It’s out of reach for now, but possible in the foreseeable future.