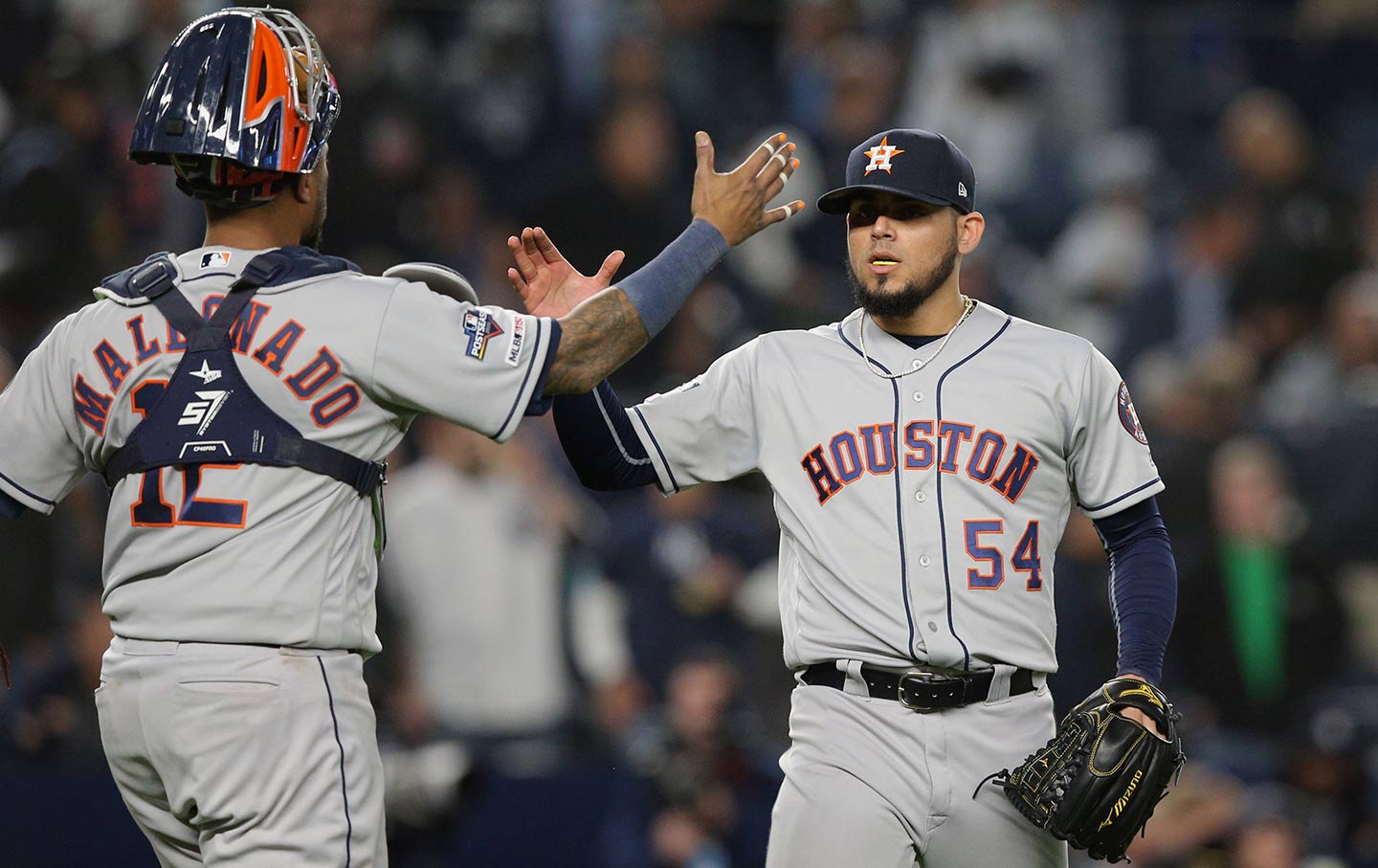 The Astros were able to sign star closer Roberto Osuna on the cheap. There wasn’t a big market for a player who had been suspended for 75 games in 2018 for “violating Major League Baseball’s domestic violence policy.” Or to put it more bluntly, there wasn’t a big market for someone who allegedly assaulted the mother of his then-3-year-old child, a woman named Alejandra Román Cota. These charges were only dropped after Cota returned to Mexico and declined to travel back to Toronto to testify. As part of their agreement, Osuna agreed not to have contact with her for one year and to enter counseling.

The details are murky, but they were ugly enough that the talented Osuna was available for anyone to claim. The Astros traded some flotsam to the Toronto Blue Jays to get him on the team. From a baseball perspective, this was a winning move: Osuna saved 50 games, providing a missing piece of the puzzle on the road to the World Series.

The Astros decided that they would weather whatever backlash they might receive. Their general manager, Jeff Luhnow, even said that it could “raise conversation and awareness of this topic. And I’m OK with that, I think it can actually turn out to be a positive down the road.”

Yet for some reason that wasn’t enough for the bros in charge. After the Astros won game six of their AL Championship Series game against the New York Yankees, sending them to the World Series, they ripped the mask off all the talk about “conversation and awareness.” A young executive decided to show the arrogance of what we might call Generation Kavanaugh.

Osuna had given up a two-run homer in the ninth inning, sending the game into extra innings. Reporters were attempting to get comment from the reliever about his late-game foibles when, according to Sports Illustrated reporter Stephanie Apstein,

in the center of the room, Assistant General Manager Brandon Taubman turned to a group of three female reporters, including one wearing a purple domestic-violence awareness bracelet, and yelled, a half dozen times, ‘Thank God we got Osuna! I’m so f———glad we got Osuna!’”

Again, the assistant general manager, an executive representing the club, yelled that six times. He was also reportedly holding a cigar, which I mention only for Freudian purposes.

Taubman’s tantrum was immediately recognized as ugly enough that a Houston Astros staffer apologized to the reporters present. The team also clearly saw that this wasn’t the greatest look for either Taubman or Osuna, because they walled Taubman off, preventing him from doing any interviews or issuing a comment about his actions. One might expect a modest apology after this—perhaps a few carefully massaged words about the emotions of the moment getting the better of all concerned. But that’s just not how execs roll in 2019. The Astros decided to do what they all do in 2019: they doubled down. After refusing comment for the Sports Illustrated story, they issued the following statement:

“The story posted by Sports Illustrated is misleading and completely irresponsible. An Astros player was being asked questions about a difficult outing. Our executive was supporting the player during a difficult time. His comments had everything to do about the game situation that just occurred and nothing else—they were also not directed toward any specific reporters. We are extremely disappointed in Sports Illustrated’s attempt to fabricate a story where one does not exist.”

There was one problem with this denial: Other reporters were present who immediately went to social media to corroborate Stephanie Apstein’s version of events. Hunter Atkins of the Houston Chronicle tweeted, “The Astros called this @stephapstein report misleading. It is not. I was there. Saw it. And I should’ve said something sooner.”

Instead of apologizing, the Astros seem content to bash the media and brazen their way through it. (Brandon Taubman has issued a statement since the writing of this article, which is being derided as an unapologetic apology.) As David Roth, the great chronicler of Donald Trump over at Deadspin, tweeted, “Trump’s enduring legacy will be that powerful parties that get busted being shitty will never again apologize or take responsibility for it. It’s just going to be this and more of this forever, because they never cared and now see this option open to them.”

This is the sorry truth. The only response is to use Taubman’s expectorations to shine a light on Osuna, the Astros, and the way that Major League Baseball truly handles domestic violence: Signing players with histories of domestic violence is not an act aimed at starting dialogue. It’s just something that turns flawed individuals into athletic bargains.

This incident also highlights the reality of being a woman in the clubhouse in 2019. People trying to do their job are still subjected to behavior that would be out of bounds in—hopefully—most other workplaces. So let the Astros double and triple down. We should do the same with our coverage of the underbelly of how baseball execs operate when they think no one is paying attention. And we should thank Stephanie Apstein for having the guts to report what happened.