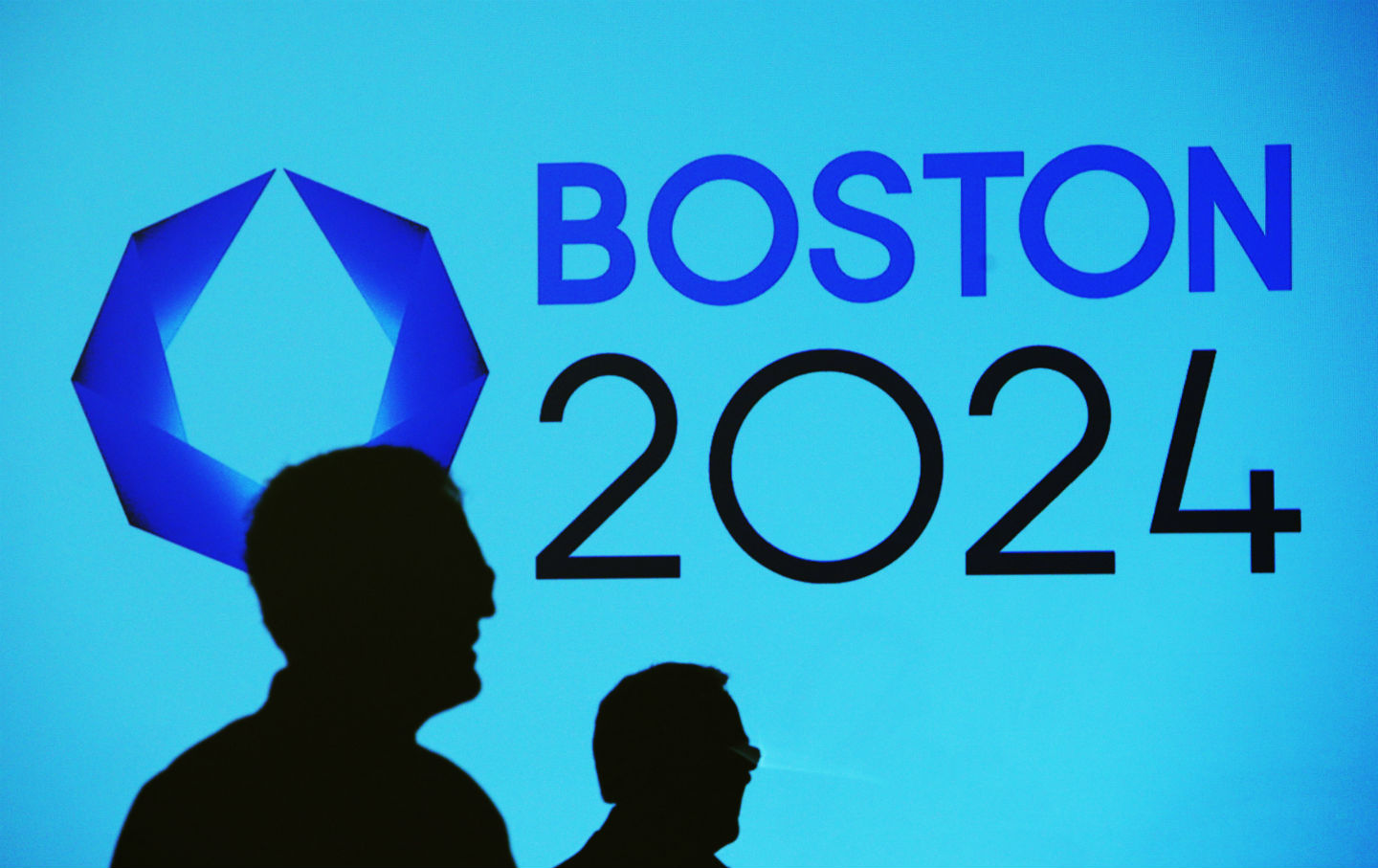 In his presentation to the US Olympic Commission in December of last year, Mayor Martin Walsh said of Boston, “We don’t have real opposition . . . Everyone who is engaged, everyone who has listened, everyone who has faith in our future understands the opportunity this represents for our city.” He continued, “Boston’s commitment to the Olympic Movement and the Olympic Games is broad and it is deep.”

These were strange claims from our new mayor, as he had neither listened to nor engaged the public in the lead-up to the submission of the city’s Olympic bid to the USOC.

Although the origins of the campaign for a Boston Olympics can be traced to shortly after the 2012 London Games, the political effort became clear during the summer of 2013, when the State Senate nearly unanimously passed a bill to create a feasibility commission to study the prospect of hosting the 2024 Summer Olympics. When the commission was officially formed that November, it was filled with political staffers and titans from the construction/real estate and tourism industries rather than economists who study the impact of the Games. The commission was chaired by John Fish, the CEO of Suffolk Construction, the largest construction company in New England. Fish, the 33rd wealthiest person in Boston, has gained a reputation as “most powerful man in Boston” because of his closeness with the mayor’s office and the ease with which he receives city contracts.

At first, the Olympics discussion largely flew under the radar in Boston. The late mayor Tom Menino thought the idea was “far-fetched,” and the issue was barely discussed in the mayoral election in 2013. Although the Cambridge City Council took a stance in December against the bid, the Boston City Council ignored the issue entirely. The Boston 2024 Partnership, the successor commission, operated in secrecy. There were no public meetings by Boston 2024 or the mayor in the lead-up to the submission of the bid, and even the bid itself has yet to be released in full.

In November, however, details of the undisclosed bid started leaking out. We learned that Franklin Park had been designated for the equestrian events and pentathlon—but no one had ever asked those who live near and use Franklin Park. Franklin Park is Boston’s largest green space. Created by Frederick Law Olmsted in the 1800s, it borders economically and racially diverse neighborhoods like Roxbury and Dorchester. For many Bostonians in these communities, Franklin Park is their only access to large park space. The reality that a private group could swoop in and claim ownership over something that belongs to all of Boston was shocking to us. We decided that if the mayor and Boston 2024 weren’t going to host community meetings, then we would. We held the first open community meeting about the bid, where residents from across Boston and the metro area where able to voice concerns, ask questions and come together to start organizing against the bid.

Although the anti-democratic process should be a deal-breaker by itself, the history of the Olympics provides ample reasons for Bostonians to oppose their city’s bid: cost overruns, lingering financial stress, displacement of low-income communities, intrusive surveillance technologies, and increasingly militarized policing. The memory of the Big Dig, moreover, looms large over the discussion of the Olympics—and rightfully so. Bostonians remember hearing the same promises of new infrastructure, jobs, and economic development but getting 25 years of mismanagement and cost overruns—and a massive debt that has hindered the MBTA from investing in critical upgrades.

This February, Mayor Walsh finally began hosting so-called “Community Meetings.” Each month until September, a meeting is slated to occur in a different neighborhood across the city.  The meetings are advertised as “an opportunity to discuss the benefits of hosting the Games and impact on the City.” However, it is clear at these meetings that neither the mayor nor Boston 2024 is interested in a serious debate about whether or not the city should (or even wants to) host the Olympics.

The first hour of each meeting is taken up by a marketing pitch from Boston 2024, filled with massaged numbers, Olympic buzzwords and a personal narrative from John Fish about the ”transformative power of sport.” Although the meeting is nominally organized by the mayor and facilitated by a project manager from the Boston Redevelopment Authority, it is clear that it is Boston 2024, not city officials, who is in charge. (The appearance that a private, unelected group is running a city meeting is only enhanced by the fact that Mayor Walsh, the purported host, has shown up an hour late.)

When their slideshow is finally done, Boston 2024 boosters halfheartedly field—or dodge—questions and comments from the audience. Citizens are often justifiably worried about the impact that venues will have on their communities, or are indignant at having been shut out of the process entirely. When Boston 2024 reps can’t answer a question (or don’t want to), they resort to what one could call “Olympics-speak”: jargon-like phrases that ultimately mean nothing. If someone asks about the impact of a venue on a neighborhood, they will be told that the bid is in a “proof of concept” phase, implying that no plans are set in stone. If someone asks about the logistics of relocating the “temporary stadium” or the size of the international communications center, they will be told of the mysterious power of “rapidly developing technologies.” Some concerns are dismissed outright. When a citizen asked Boston 2024 about the history of sex trafficking and the Olympics, he was told that that sex trafficking is simply not an issue in the US. Boston 2024 has deflected questions about civil liberties violations and militarized policing by claiming that caging protesters doesn’t happen in the US either. That’s news to those who lived in Boston during the 2004 Democratic National Convention.

It is difficult to leave these meetings without a feeling of wasted potential. Over one-fifth of Bostonians live below the poverty line. The homeless population is rising faster in Massachusetts than in any other state, and Boston faces a severe lack of affordable housing. We have an underfunded school system and an outdated transportation system. Boston could be engaging its citizens in a collective process of planning to build a more equitable and sustainable city in 2015. However, instead of planning the future of Boston for the people of Boston, the city is planning it for the IOC.

Boston 2024 and Mayor Walsh like to talk about an “Olympic movement.” Describing a three-week corporate-driven spectacle as a “movement” is an insult to the numerous people out there fighting for a better Boston for everyone. However, the Olympic bid can be the opportunity for a movement: a movement focused on rejecting the top-down, corporate-driven planning pushed by the Mayor and Boston 2024, instead building a more inclusive, just, and sustainable Boston for all of its residents.