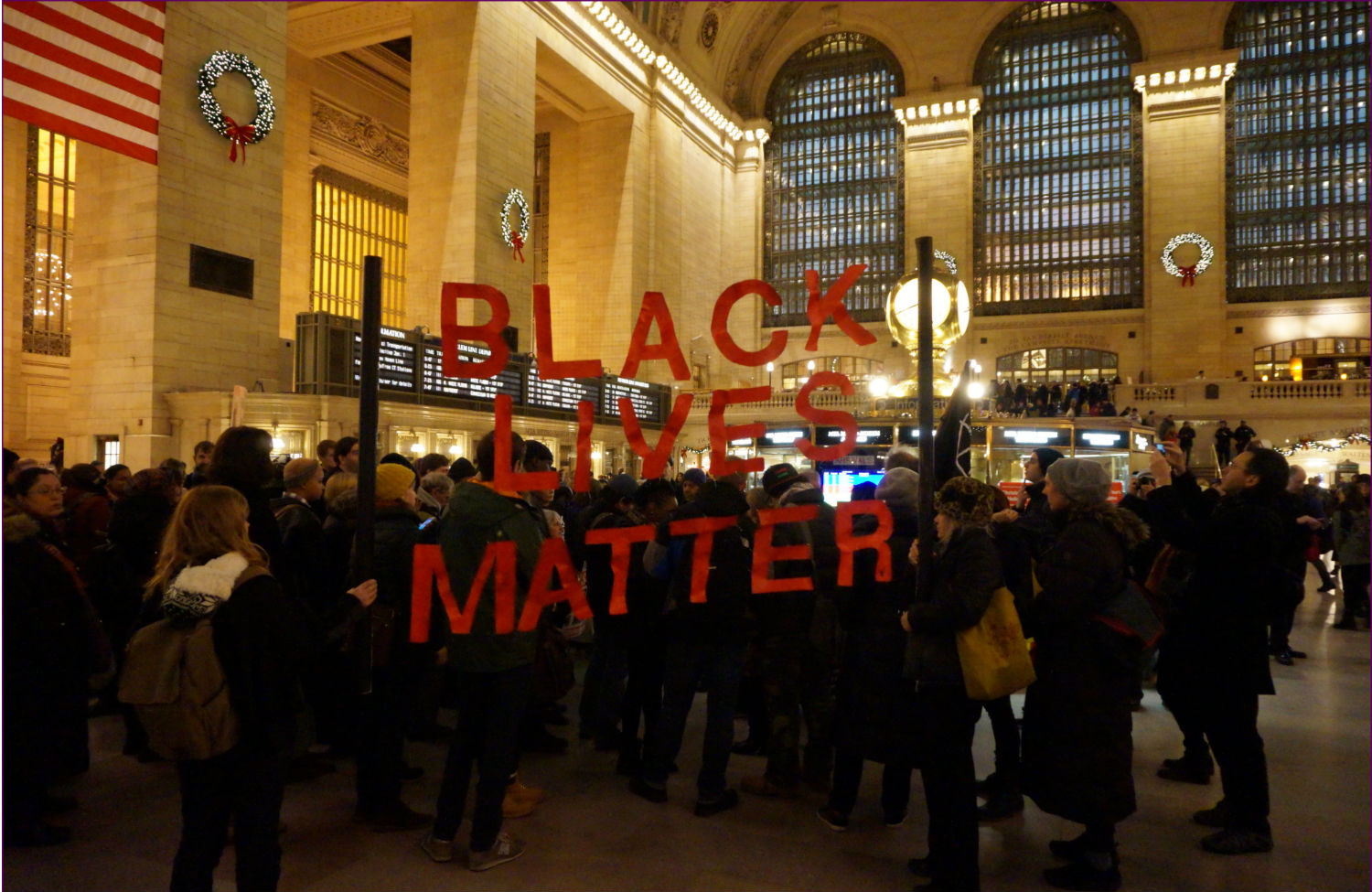 When Metro Transit Authority police officers were looking for a surveillance spot to film #BlackLivesMatter protesters in Grand Central Terminal, they chose a particularly juicy location: the balcony level overlook provided by the high-end restaurant chain known as Michael Jordan’s Steakhouse. Oh me, oh my, where to begin…

This past season in the NBA has seen an unprecedented level of political expression by players, prodded and provoked to speak out and align themselves with the #BlackLivesMatter movement against police violence. The reason players from LeBron and Derrick Rose to David West and Nik Stauskas went public with their solidarity was because a mass in the streets—and on social media—was both loud and powerful enough to enter their rarified air.

Michael Jordan, the greatest NBA player to ever breathe and current owner of the Charlotte Hornets, decided, unsurprisingly, to not be a part of this. Jordan has long been a symbol of the apolitical star athlete more concerned about his branding and commercial appeal than social statements. In the wake of the on-court protests, many observers have noted that the Jordan Way was starting to appear to be as passé as butt-hugging shorts, with this generation of social media–savvy, socially aware jocks creating a new template. That’s why the use of a restaurant that bears the Jordan name to monitor protesters is more than a bad look. It projects the idea that His Airness is not only disinterested when it comes to #BlackLivesMatter, he’s actually on the other side. One e-mail I received about this, from the group Shut It Down NYC, reads in part, “With the light cast on Michael Jordan’s implicit support of state intimidation of Black Lives Matter protesters, we hope that he will stop his cooperation. Otherwise we will just stop buying his products.”

There is also a change.org petition up asking Jordan to “stop cooperating with surveillance of Black Lives Matter protesters.”

Is this a fair assessment of the situation, or more a case of “If the Jordan Dub Zero fits”? My Nation colleague James Kelly and I have been trying… and trying to find out whether the use by police of the Grand Central restaurant that bears his name was something that would require Jordan’s approval. In other words, how complicit is Jordan in this process? What we learned is in many ways almost as disturbing than the notion that Michael Jordan wants his steakhouses to be a strategic masthead against the #BlackLivesMatter movement.

Let’s start with Grand Central Station itself. I grew up in New York City and always assumed it was public, City-owned space. It is actually owned by a private real estate concern called Argent Ventures. The MTA pays in excess of $2 million annually to run trains through the facility. As for the Michael Jordan Steakhouse, it operates as a high-end franchise, with the one on the north balcony of Grand Central owned by the Glazier Group, namely Penny and Peter Glazier. According to The New York Times, the financial arrangement between Michael Jordan and the Glaziers is not for public consumption.

We spoke to Penny Glazier about whether police need any kind of permission from a private restaurant to conduct this kind of surveillance. Ms. Glazier said, “The building is owned by New York State. We’re just tenants and we have to abide by their rules.” As mentioned earlier, this is not the case, as “the building” is owned by Argent Ventures. We also received a callback from their son Matthew Glazier, who described himself as the “general counsel” for the group. He told James Kelly, “We don’t comment on that type of stuff…. ask the MTA, it’s public knowledge.” He also said, “If the MTA comes in and says anything, we’re going to respect what they say.”

What is bizarre is that we spoke to an MTA officer who also said that Grand Central Station is owned by the City. He told us that permits are required for approval by station managers to conduct surveillance. In addition, here is video from February 9 of an independent Internet reporter trying to ask an MTA officer why demonstrators are being filmed and getting this response: “You don’t have a right to know anything.” (This statement is a little different from Glazier’s assumption that “it’s public knowledge.” Maybe “You Don’t Have A Right To Know Anything” should just be emblazoned on police cars, the new “To Protect and Serve.”)

I don’t believe that Michael Jordan, the human being, gave any kind of OK to the MTA or the NYPD to use the steakhouse that bears his name for surveillance purposes. I don’t even think the Glaziers gave any kind of explicit permission to the police, because it is highly doubtful that they were asked. The police in the New York City of 2015 go where they want to go. But I do know that Michael Jordan should care about what happens under his name. If Jordan put out a statement that he does not want police using his restaurants as surveillance hotspots for Black Lives Matter protests, I bet they would be looking for a new location mighty quick. It is not just that it’s a “bad look.” To allow the Michael Jordan Steakhouse to be Surveillance HQ is a slap in the face to every NBA player that risked their brand appeal, commercial viability and incurring the wrath of their fans by standing with this movement. Jordan was never the best of teammates. But perhaps as an owner he should care whether the new generation of players wonders whether he believes that their lives matter.