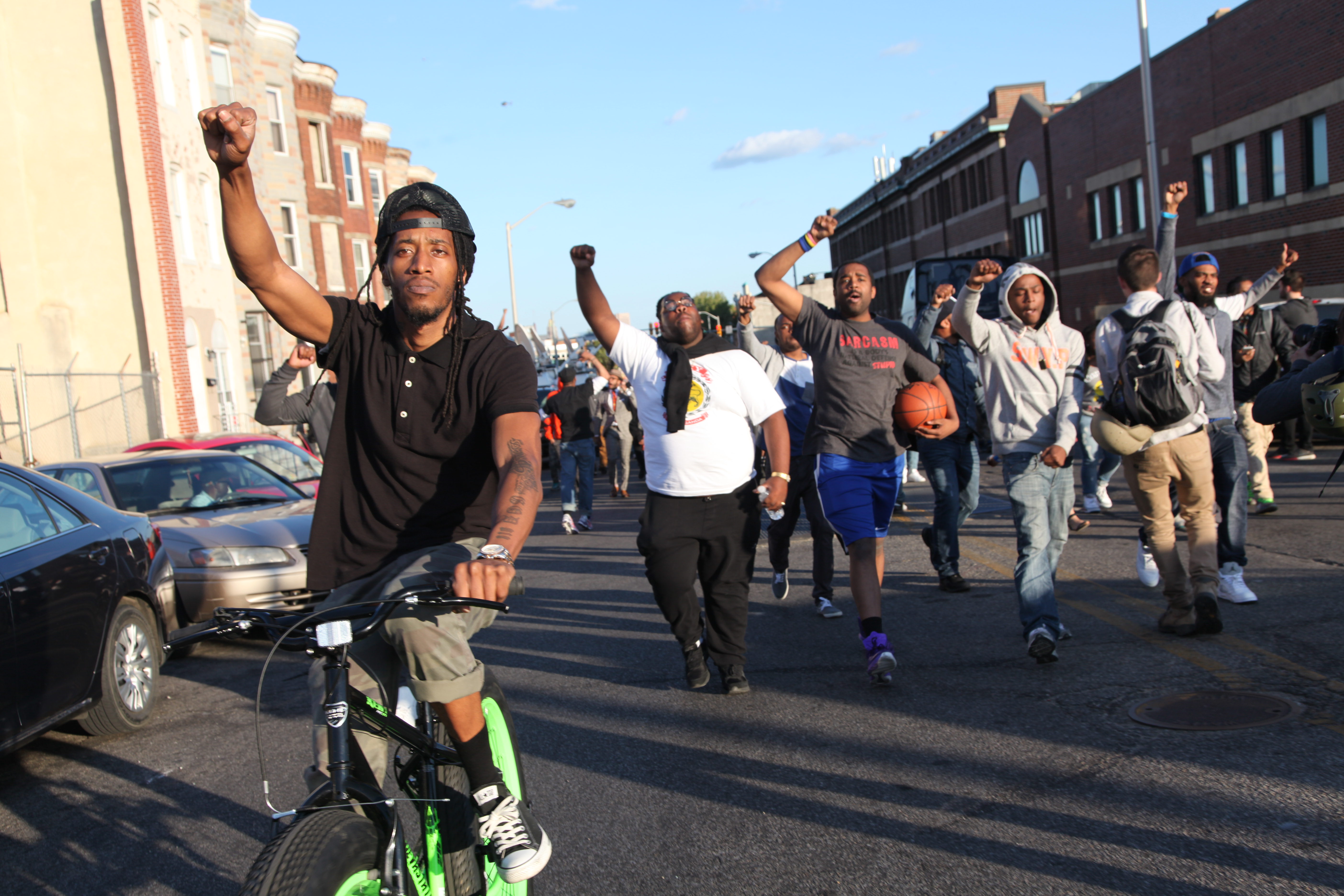 His nickname was Mike-Mike and his favorite color was blue.

The morning workshop portion on the first day of the gathering was over, and the afternoon plenary was the first time that many of the attendees had come together in the same room. Some were weary from driving halfway across the country to get to Cleveland. Some were distracted by the scarcity of conference housing. The workshop offerings, totaling almost 100, left others unclear about how to navigate this overwhelming weekend.

But as a procession of relatives of black people killed by state-sanctioned violence walked across the Cleveland State University stage, there was no doubt what this weekend was about: the defense of black bodies, the celebration of black collective resiliency, and the building of a movement the likes of which has never been seen. One by one, starting with the relatives of Emmett Till, each family member shared poignant memories of their murdered loved ones. We learned their favorite colors, their favorite sports teams, their nickames. Mike Brown Sr. told the audience that his son’s nickname was Mike-Mike and his favorite color was blue. Each family member concluded with the refrain, “This is why we fight.”

It was a devastatingly effective orchestration of humanity and loss, but not the day’s final word. As the session ended, audience members in the packed auditorium leapt out of their seats in delirium as Kendrick Lamar’s voice erupted through the sound system:

When you know, we been hurt, been down before, nigga
When our pride was low, lookin’ at the world like, “where do we go, nigga?”
And we hate Popo, wanna kill us dead in the street for sure, nigga
I’m at the preacher’s door
My knees gettin’ weak and my gun might blow but we gon’ be alright

The Movement for Black Lives had a soundtrack. Some of the songs may have been chosen from the playlists of the conference organizers and played during the plenaries, but most were improvised by the activists in attendance from all across the country. At any given moment during this three-day weekend, a dance, chant, protest song, or drumming session would spontaneously break out, with people asserting and luxuriating in their blackness.

Ever since Trayvon Martin’s slaying in 2012 and the subsequent acquittal of his neighborhood-watch killer, George Zimmerman, America has been reawakened to the daily terror faced by black people at the hands of law enforcement, vigilantism, and the justice system.

Through the crucibles of New York, Cleveland, Ferguson, and dozens of other less notorious battlegrounds, a new generation of black change agents has emerged—people who are organizing youth, queer, and transgender folks, women, immigrants, the differently abled, and other black communities. #BlackLivesMatter has been the rallying cry. The Movement for Black Lives gathering, held on the campus of Cleveland State University from July 24 to 26, was the first significant attempt to bring these organizers under one roof.

It was clear that the conference organizers had been overwhelmed by the response to their invitation. The original projections declared that “Hundreds of Black Freedom Fighters” would attend, but final estimates put the gathering at well above a thousand people. Chaotic scheduling updates were transmitted by text and mobile app, but humanity reigned even in logistics. Outside of one workshop door, a handwritten note announced that the session had been canceled “on account of the facilitator being tired as fuck!”

The selflessness demonstrated by the conference organizers was more than enough to ease whatever headaches these hiccups caused. Registrants had been instructed to determine themselves how much to pay in registration and housing fees based on their financial capacity. Legions of volunteers arrived almost a week in advance, on their own dime. The planning and organizing team, which included the three co-founders of #BlackLivesMatter, barely introduced themselves to the attendees, and there were no pictures or bios of them to be found in the program or on the official website.

The gathering was less about creating an agenda than it was about grounding the movement in black-on-black love.

This horizontal form of leadership and relinquishing of ego has emerged as one of several generational markers in this movement. There were plenty of elders, old-school black nationalists, and middle-aged nonprofit professionals in effect, but the weekend and its dominant sensibility belonged to radicalized, under-35-year-old social-justice organizers.

The Cleveland gathering was not only conspicuously devoid of white people but, unlike more traditional political and cultural events, there were neither headliners nor lionized personalities. Al Sharpton and the heads of the traditional civil-rights organizations were nowhere to be found—perhaps not only because of the skepticism with which they are regarded by young organizers but because they would have had to endure a conference in which they would have had no featured speaking role.

The workshops were conceived and provided by the participants themselves. Several hundred were proposed, and the final line up was decided by on-line voting. Sessions on political prisoners, the legacy of the Black Panther Party, queer and transgender leadership, reparations, and the intersection between nationalism, gender, and sexuality, stood side-by-side with sessions on healing and self-care, organizing for resilience, urban farming, and intra-community conflict resolution.

But what signaled the most significant break from the black political status quo was the space claimed by queer, transgender, and gender-nonconforming attendees.

On Friday night, a conference after-party was turned into a protest site after police removed a transgender conference participant from the men’s room of the Vault, a nightclub in Cleveland. The next morning, a contingent of transgender and gender-nonconforming folks lovingly but forcefully came on stage during a plenary session and took the conference organizers and the cisgendered attendees to task for not creating a safe and respectful environment for them at the gathering. They cited a litany of issues, including failing to establish gender-neutral bathrooms at the conference hall and not including preferred gender pronouns on name tags; not doing enough to train volunteers on how to appropriately engage transgender attendees; and not predetermining that the site of the after-party was a safe space for queer and trans revelers. The next day, the contingent administered a primer on how future gatherings—and the broader movement—could be more supportive of trans participation.

For a gathering that, up to that point, had set its sights mostly on external forms of oppression, it was a revolutionary moment of inwardly focused accountability, community building, and course correction. Queer and trans folks were not working at the margins of the movement for black liberation but had moved, quite literally, to center stage, where I suspect they will remain.

A Q&A With Opal Tometi, Co-Founder of #BlackLivesMatter

The obvious question is, what’s next? To the credit of the conference organizers, the gathering was less about creating a definitive agenda or a centralized leadership and coordination structure than it was about framing the moment in a legacy of resistance and grounding it in black-on-black love.

Of course, a set of guiding principles were included in the program; there were the perfunctory “next steps” strategy sessions at the end of the conference; and everyone in attendance demanded future gatherings. But the conference organizers astutely recognized that the gathering was really a networking hub and fueling station for a thousand self-powered movement engines.

Poetically, in the waning hours of the conference, as some participants were leaving to catch flights home, we received tweets and texts about folks from the gathering who had come to the defense of a black youth who was reportedly arrested by Cleveland police. Mobile video chronicled how they confronted the police officers and were attacked with pepper spray. These images were interspersed with texts from the conference network providing a jail support number.

For those of us waiting in the airport, glued to our phones, it was a frightening and anxious moment, and a confirmation of the seeming inevitability of physical confrontation with law enforcement that hung over the gathering. But even before the news came that the young person in question had been released by the police, I sensed that a certain peace had come to those of us waiting in the airport for further news. We had been at the gathering. We reveled in the passion, we witnessed the collective brilliance, and we were one with the mobilization of powerful black bodies. Yep, we know more shit is going to rain down on us, but we gon’ be alright.