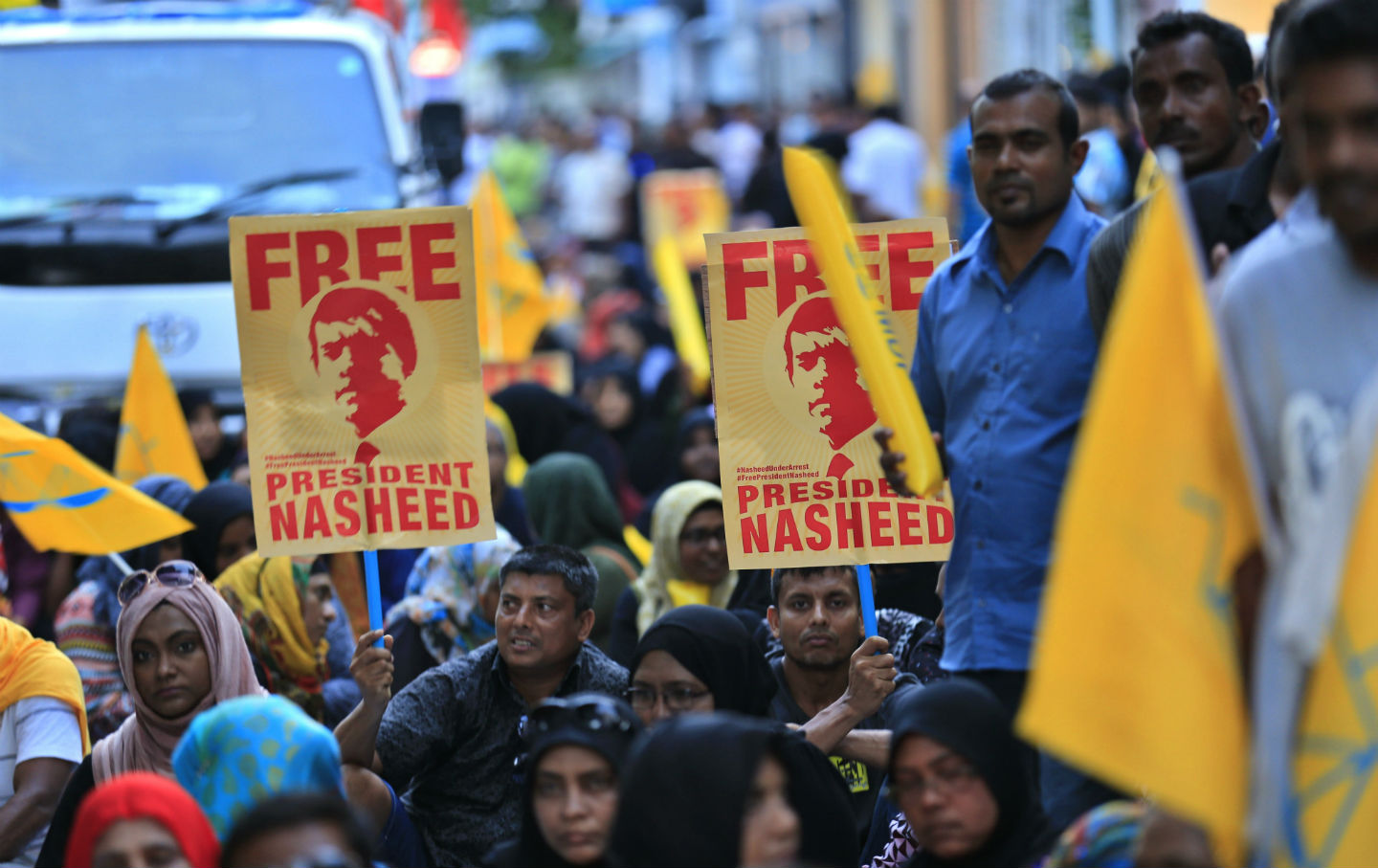 Protests for the release of former president Mohamed Nasheed outside the courts in Male', Maldives in March. (Sinan Hussain/AP)

International climate and democracy hero Mohamed Nasheed, the former president of the Maldives, has been sentenced to thirteen years in prison for alleged “terrorism” after a controversial trial that Amnesty International condemned as “a travesty of justice.” The governments of the United States, Great Britain, the European Union, Canada and India have said they are “deeply concerned” that the trial was not “conducted in a transparent and impartial manner or in accordance with due legal process,” in the words of Hugo Swire, a British Foreign Office minister. Nasheed responded to the sentence by giving a statement to the court that urged citizens of the Maldives “to stay courageous and strong, to confront the dictatorial power of this regime…[and] to take all of your lives in your hands and go out onto the streets in protest.”

In an apparent Alice-in-Wonderland development, Nasheed’s lawyers fear that they will be prevented from appealing his conviction by new rules put in place days before his trial began. The rules grant defendants only ten days to file appeals, which must be based on a signed copy of the court proceedings. The court has now told Nasheed’s lawyers it could be fourteen days before the proceedings are released.

"At every step, the…regime has violated Nasheed’s rights, while the courts break the law and the Constitution with impunity,” said Hamid Abdul Ghafoor, a spokesman for Nasheed’s Maldivian Democratic Party. “Democracy is dead in the Maldives. In its place, we have thuggish authoritarian rule."

Meanwhile, Nasheed is being held in a detention center on Dhoonidhoo Island while the government prepares a “special jail” for him, Hamid told The Nation. Nasheed’s supporters fear that such a “special jail” could foretell a return to the solitary confinement Nasheed endured while leading the fight to overthrow the former dictatorship of Maumoon Abdul Gayoom, who ruled the island nation for thirty years and whose half-brother, Abdulla Yameen Abdul Gayoom, is now president.

After becoming his nation’s first democratically elected president in 2008, Nasheed drew global attention by convening an underwater cabinet meeting. He and his ministers donned scuba gear to highlight the dangers that rising seas pose to the Maldives, a chain of 1,200 small islands south of India that are barely above sea level. In 2009, Nasheed was applauded like a rock star by activists at the Copenhagen climate summit when he championed radical greenhouse-gas emissions cuts to reduce atmospheric carbon dioxide concentrations to 350 parts per million.

The vulnerability of low-lying island nations to climate change was illustrated again last week in Vanuatu, which was devastated by Cyclone Pam, one of the most powerful storms ever recorded in the South Pacific east of Australia, according to Stefan Rahmsdort, a scientist at the Potsdam Institute for Climate Impact Research in Germany.

“I've spent time in the Maldives, enough to know that Nasheed is not just one of the planet’s greatest climate heroes but the Mandela of his nation,” said Bill McKibben, the author and co-founder of the activist group 350.org. “He’s already spent too much of his life in jail and now he's back again, but if the global community stands up to the thugocracy ruling the Maldives he will, I have little doubt, once more restore democracy to his beautiful, vulnerable islands.”

Maldives officials insist that Nasheed was convicted in a fair and impartial trial and have rejected outsiders’ criticisms as infringing on the nation’s sovereignty. President Yameen, who defeated Nasheed in disputed 2013 elections during which the nation’s Supreme Court annulled the first round of voting and postponed the second, has been quoted in the local media saying, “people in faraway lands…need not come here to make decisions.”

“We have an independent judiciary and the separation of powers,” Jeffrey Waheed, the deputy permanent representative for the Maldives to the United Nations, told The Nation. Waheed denied complaints by Nasheed and his attorneys that the trial was “blatantly politicized” and that the attorneys were given inadequate time to prepare a defense and prevented from calling their own witnesses to testify before judges who, in two cases, had served as witnesses for the prosecution. The reason so many foreign governments take a different view of the case, he added, is that “Nasheed is an incredibly popular figure, a superstar to many in the international community, and many governments are under enormous pressure because of that.”

Waheed also denied that Nasheed was manhandled by security forces when he arrived at court for the first day of trial on February 23. Urging everyone to view video of the scene and decide for themselves, Waheed argued that security forces only ended up dragging the former president into the courtroom because Nasheed “chose to be dragged” in order to manipulate media coverage and attract public sympathy.

The video shows a police van pull up in front of the courthouse. Nasheed emerges and walks towards the entrance, where a gaggle of reporters and photographers await. Smiling and waving, Nasheed approaches the journalists and begins speaking, possibly in response to shouted questions. When security officials grab one of his arms and try to guide him toward the entrance, Nasheed angrily shakes off their grasp and resumes speaking to the journalists. The security forces grab him again more forcefully, and he falls to the ground. They lift him and, twisting one of his arms behind him, carry him into the courthouse.

Waheed, who claims to have “stood side by side with Nasheed during the democratic movement” before he was elected president, said that Nasheed went limp in keeping with his civil disobedience training, and had the right to do so, but there is no doubt that “if there were not cameras to record it, he would have cooperated.”

The terrorism charges against Nasheed stemmed from the arrest of the chief judge of the Maldives criminal court, Abdulla Mohamed, in January of 2012. The arrest occurred as street protests were rocking the country and leaders and sympathizers of the previous dictatorship were urging Nasheed’s downfall. Nasheed categorically denied, during his recent trial, having ordered the arrest, though he appears to have supported it at the time. One of his advisers told The Nation that Judge Abdulla was arrested by the military after he “kept acquitting, in a blatantly politicized fashion, Gayoom loyalists and politicians who were calling for the violent overthrow of the government.” Normally police would handle such an arrest, but they couldn’t, the adviser asserted, “because [judge Abdulla’s] own court, the Criminal Court, kept quashing the arrest warrants.” Waheed counters that it was the court, not Abdulla himself, who quashed the warrants, and in any case it was the prosecutor general alone, not the president, who had the constitutional authority to order such an arrest.

On February 7, three weeks after Abdulla was arrested and in the midst of a nationally televised mutiny by police and military personnel, Nasheed resigned as president of the Maldives. The next day, he said that supporters of the previous dictatorship had forced him at gunpoint to step down. Seven weeks later, in an interview with The Nation, the former president said he had been the victim of a coup and if he had not resigned, “They would have killed me.”

The accusation that a military coup forced Nasheed from power remains controversial to this day, though Uman Naseer, now a minister in president Yameen’s government, admitted it at the time on camera. Interviewed by Paul Davis of Australia’s SBS television, Naseer proudly said he was in command of the street protests and that once president Nasheed was surrounded inside an army base, “I have told Nasheed to resign.” Nevertheless, a subsequent inquiry co-chaired by the Maldives government and the Commonwealth of Nations (the alliance of former British colonies) found that there was no coup d’état and that Nasheed had resigned voluntarily, a conclusion Nasheed blasted as a “whitewash” and his advisers attributed to the alleged unwillingness of Commonwealth governments to make trouble for fellow nation-states.

“I have no doubt that Mr. Nasheed will be out of Maldivian politics for a long time, and we want to make sure of that,” Naseer told Davis in March 2012. “He should face justice and I think he will get a prison sentence of ten to fifteen years.” Now, Naseer is in a position to enforce his strikingly accurate prediction: as the current government’s home minister, he is responsible for the nation’s police and prisons. Indeed, it is Naseer who is overseeing construction of the “special jail” now being prepared for the former president, which will be located, according to Nasheed’s supporters, adjacent to a garbage dump.