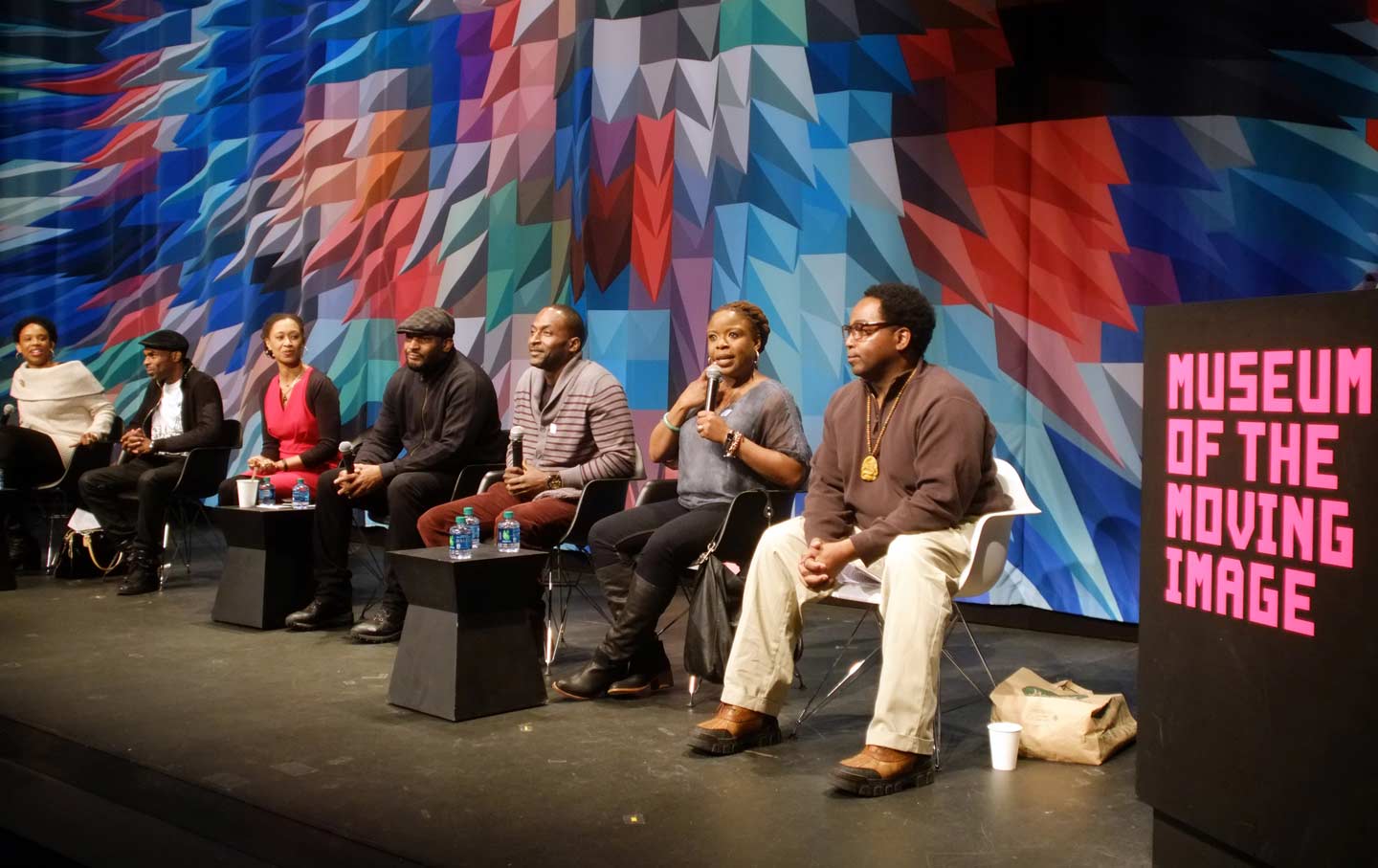 A panel discussion at “The Color of Comedy” event, which is part of an ongoing series at the museum that explores the intersections of race and media. (Edwin Pagán / Museum of the Moving Image)

In the early 1990s, Warrington Hudlin, the president and co-founder of the Black Filmmaker Foundation and vice chairman of the Museum of the Moving Image, produced several black cult-classic comedies—the House Party franchise, Boomerang, and Bébé’s Kids—that all had, what he called recently, “an underpinning of social commentary.” Last Saturday, at MoMI, he hosted an afternoon of comedy called “The Color of Comedy,” a part of an ongoing series at the museum that explores the diversity among the film and television industries. To kick off the event, he stood before the audience, wearing blue jeans, a blue hoodie embossed with the Superman logo, and blue-and-grey Nikes. He grabbed a microphone to introduce a screening of Harry Belafonte’s 1967 civil rights–focused comedy TV special, “A Time for Laughter: A Look at Negro Humor in America,” by sharing a few personal anecdotes. “In my household, we were so impressed we brought our first real audio-tape recorder and we recorded it,” Hudlin, who is 63, boasted. “Year after year, when I wanted a good laugh, I would play it.”

He paused for a second, searched the room through his rimless glasses, and said, “Belafonte was doing something beyond being funny—this is the reason we are here today.” He told the audience this was the first time the special had been seen in nearly 50 years. An echo of “wows” filled the room. Then, playing to the crowd, he whispered, “So you are a part of history today.” “Are you ready?” he asked. A few in the crowd mumbled, “Yes.” He asked again in a higher pitch, and, after seeming satisfied with the audience’s enthusiasm, he roared, “Let’s do this!”

For the next hour, in the museum’s dimly lit theater, a grainy taping of the comedy special transported Hudlin and the audience back to an era of comedy that was fueled by injustice. When the show first aired, it featured Sidney Poitier as the narrator and skits by some of the biggest names in late-’60s black comedy—Dick Gregory, Redd Foxx, George Kirby, Moms Mabley, Dewey “Pigmeat” Markham, Godfrey Cambridge, and a very boyish-looking Richard Pryor, who played a waggish undertaker. “There’s a history of comedy as a tool to speak truth to power, to address issues of human rights and racial justice,” Hudlin explained before he took his seat.

In between laughs, Sidney Poitier slyly and firmly contextualized the politics that the comedians used as material for ABC’s nationwide audience. “As seen by the Negro humorist, integration does have its hang-ups,” Poitier said. The routine that followed featured actress Diana Sands and comedian Godfrey Cambridge playing a black husband and wife who are pretending to be white in an affluent, integrated suburb. Moms Mabley, acting as their maid, ends the couple’s charade by discovering their love of watermelon.

Following the screening, Hudlin played emcee for an “interactive town hall,” comprised of successful midcareer comedians. “Those comedians—they cast a long shadow,” he said. “In your own work, were any of them your artistic predecessors?” he asked the panel of eight comedians. The Nightly Show correspondent Mike Yard spoke about how Richard Pryor influenced his career. Tim Winn noted his love for Dick Gregory.

For the next two hours, as Hudlin facilitated, the panel shared seminal television moments in black comedy—“putting the controversy to the side I don’t want to sidestep the importance The Cosby Show had,” said Leighann Lord who co-hosts the “Star Talk” radio podcast with astrophysicist Neil deGrasse Tyson—and explored the way comics challenge prejudice and privilege today in their routines. The group also discussed the challenges they face in Hollywood. An audience member asked, “How hard is it to be a black woman in comedy?” Joyelle Nicole Johnson said she is often paranoid when trying to book standup gigs. “Do you not want to book me because I didn’t have sex with you?” she has wondered. “That happens?” Hudlin asked in disbelief. “Yeah!” the female comedians shot back in unison.

Given the day’s topic for discussion, and the broader public discourse, it’s hard to imagine that Hudlin’s disbelief was genuine. The day revealed that the brand of black comedy the group discussed has long played a pivotal role in “speaking truth to power.” Belafonte’s cohort, before a national audience, hilariously repackaged the trauma of racism as a series of punch lines that exposed a truth about how an ability to laugh is one tool that can be used to diminish discrimination. It’s an exercise that black comedians have since continued; Larry Wilmore’s The Nightly Show, for example, has made a habit of ridiculing racism. Comedy alone isn’t confrontation enough, but it does provide some relief. Or as Sidney Poitier put it in 1967, “There is an old saying down home: Laughter don’t get you no grits, but it’s grits for the soul. Goodnight.”