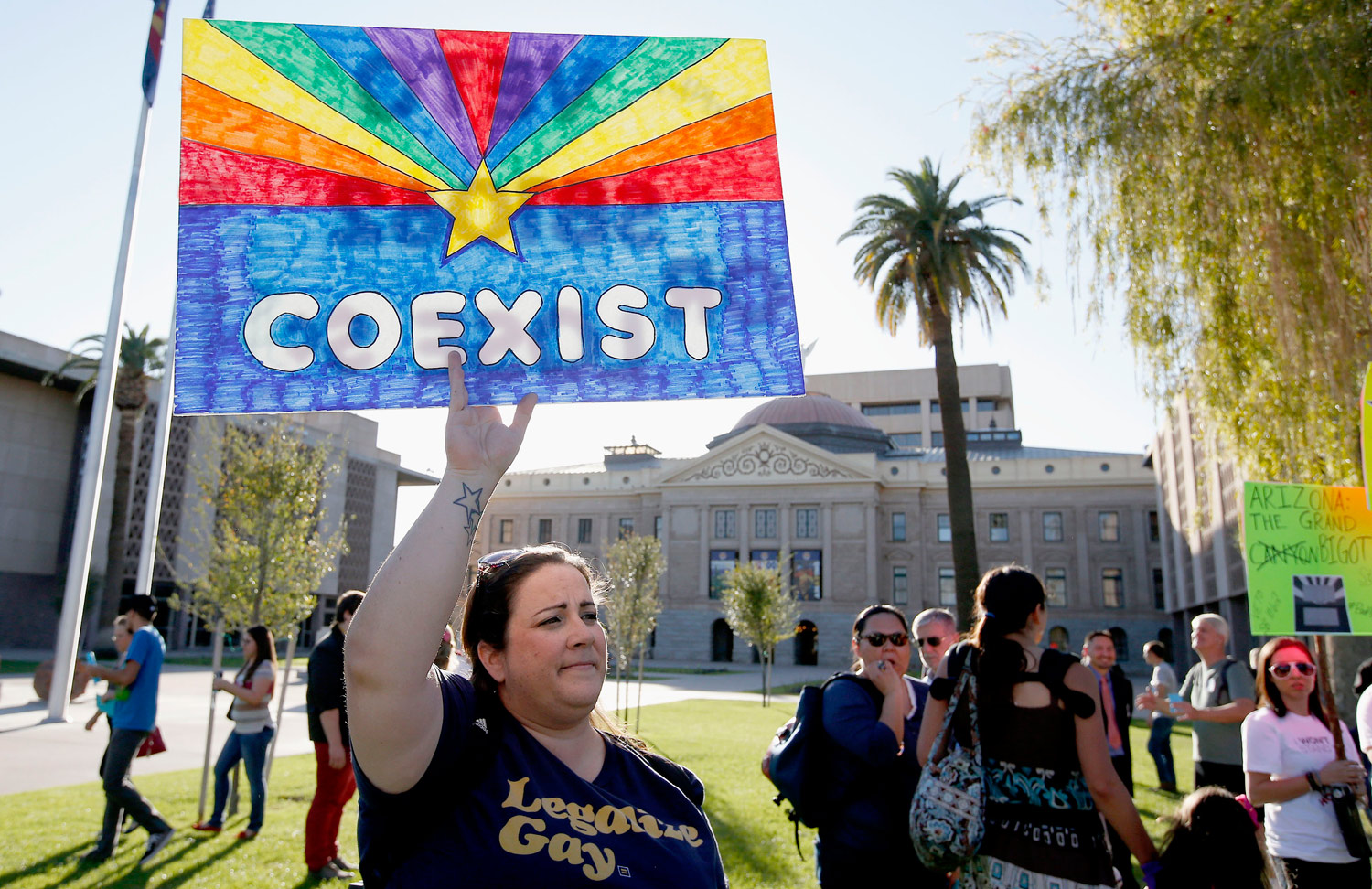 Whether talking secession, hoarding bitcoin or refusing to expand Medicaid, the American right these days is obsessed with opting out of a society that its members increasingly see as an assault on their way of life. Their latest attempt to liberate themselves from the polity was Arizona’s  SB 1062, a bill that would have exempted individuals and businesses from state law if it burdened their exercise of religion. The legislation did not single out lesbians and gays, but it was plainly motivated by anti-gay animus. Recognizing as much, corporations like Apple, AT&T and Intel, as well as the Super Bowl Host Committee, condemned the measure, and the threat of a statewide boycott prompted the state’s Chamber of Commerce to go to “DefCon 1” against it. Critics also pointed out that the bill was gratuitous; it’s already legal in Arizona to refuse to do business with gay customers. All of which was enough to convince Republican Governor Jan Brewer to veto the bill on February 26.

This turn of events has merely reinforced the Christian right’s conviction that it is they who are the victims of, as Michele Bachmann put it, “a terrible intolerance.” At The New York Times, house conservative Ross Douthat foresees a kind of anti-Christian Hunger Games in which the defeated religious right waits “to find out what settlement the victors will impose.” And what exactly will this reaping entail? Homophobes will be “marginalized” and “encouraged to conform.” Religiously affiliated schools and agencies will be required to follow the same laws as everyone else or forfeit their tax-exempt status. Christian businesses will be forced to bake cakes and make bouquets for gay weddings—and what could be a worse fate for someone who specializes in the comely arrangement of frosting or flowers? Douthat casts all of this as a fait accompli, magicked into existence by the Supreme Court and a bit of vicious fairy power. And while he claims he doesn’t mean to sound “self-pitying”—“nobody should call it persecution,” he writes—that is, of course, precisely what he intends.

So why can’t gays accept a polite culture war truce by letting “the dissenters opt out”?

First, the forces behind Arizona’s SB 1062 don’t just want to be left alone to exalt heterosexual marriages. The Alliance Defending Freedom, the Scottsdale-based group that helped draft the bill, opposes same-sex marriage, gay parenting and adoption, and abortion in all cases. It filed an amicus brief in Lawrence v. Texas arguing that gay sodomy should remain a crime. More recently, it provided counsel to Yelena Mizulina, one of the legislators behind Russia’s anti-gay propaganda law, and spent over $1.5 million last year on “human rights legal work” for groups outside the United States. If the Alliance had its way, gays and lesbians would be a globally criminalized people, hounded from public life both by private discrimination and the state police apparatus.

Second, anti-gay discrimination still happens—a lot. According to a study by the Williams Institute, which examined data collected from 2004 to 2008, 27 percent of lesbian and gay employees reported workplace discrimination within those years; 7 percent of them reported losing a job because of their sexual orientation. Outside of employment, the case law is replete with incidents of gay people refused shelter, evicted from cabs and ejected from restaurants simply because of who they are. To suggest that these accommodation cases are about a right to wedding cake trivializes the point: the civil rights movement was not about the right to eat a sandwich at a lunch counter.

Third, the twenty-one state laws meant to remedy this discrimination were all passed by democratically elected legislatures and signed by democratically elected governors. Should the Employment Nondiscrimination Act clear Congress, where it has stalled for decades, it will also be the result of a democratic process that conservatives have had every chance to influence (and which they no doubt will try to undo via the back door of religious liberty laws).

Fourth, while it’s true that the courts have been ruling in favor of same-sex marriage, they have also been extremely deferential to religious freedom. It is perfectly legal in all fifty states for a Catholic church to refuse to hire a Jewish janitor. Moreover, the federal government has bent over backwards to carve out exemptions for religious organizations in other matters. For example, the Affordable Care Act allows Catholic organizations to deny contraception coverage to their employees—an exemption that conservatives are seeking to expand to private businesses via the Hobby Lobby case, currently before the Supreme Court.

Fifth, in states that do have anti-discrimination laws that cover sexual orientation, there is not exactly a record of religious persecution. Of the more than 250,000 administrative complaints concerning workplace discrimination lodged against businesses in those states from 2007 to 2012, less than 4 percent involved sexual orientation. Of those, only a fraction were resolved in favor of the plaintiff. It is exceedingly difficult to prove that one has been discriminated against on the basis of sexual orientation, especially in matters of housing and accommodation. (Pro-tip to homophobes: if you’re going to discriminate against someone simply because he’s gay, maybe don’t put it in writing.) The threshold for legal action, never mind ordinary etiquette, allows religious conservatives all kinds of ways to minimize their interactions with gay people. Those violations of anti-discrimination law that are prosecuted are almost invariably incidents in which religious conservatives made it an express point to use their commercial power to send this message to LGBT Americans: you do not belong here. In a liberal democracy, it is well within the rights of religious conservatives to make such statements—in public, in private and from the pulpit. It is also well within the rights of the state to declare that using marketplace discrimination to do so is out of bounds.