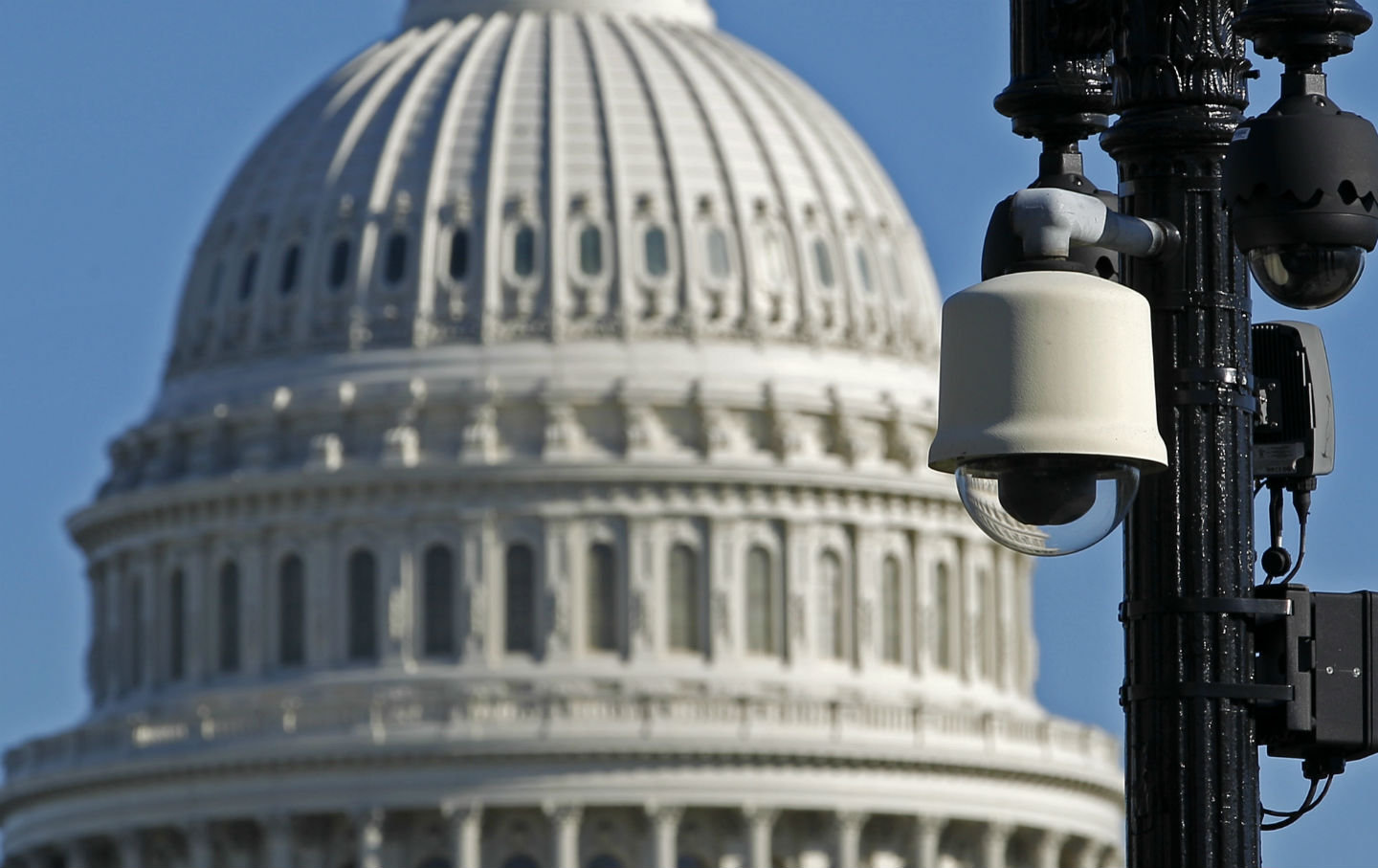 With upwards of 70 percent of the surveillance state’s budget directed to private contractors, some of the most reliable sources for tracking intelligence trends are the companies themselves.

Case in point: the recent acquisition by SAIC, a prime government contractor, of Scitor Corporation, the most secretive and least-known of the companies that collect and analyze signals intelligence for the Pentagon.

Scitor, of Reston, Virginia, is “the biggest company you never heard of,” a former high-ranking National Security Agency officer told me when I first stumbled upon the company in 2007.

By buying Scitor (for cash), SAIC is returning to the secretive world of SIGINT and satellite imagery after losing that business to Leidos, which was created in 2013 when SAIC was split into two separate companies. The $790 million SAIC-Scitor deal was finalized on May 4.

For years, SAIC—which is formally known as Science Applications International Corporation—was one of NSA’s most important contractors, primarily as a systems integrator.

One of its specialties was fusing NSA’s digitized signals with imagery from the National Geospatial-Intelligence Agency (NGA) for US regional commanders, who used the NSA’s and NGA’s “eyes and ears” to find targets for drone and bombing strikes during military campaigns.

SAIC was also a major NGA contractor and played a major role in the US Geospatial Intelligence Foundation, a coalition of contractors that support that agency (and closely followed the SAIC-Leidos split).

Most of SAIC’s NSA-NGA business is now managed by Leidos, which took control of 2,500 of SAIC’s 4,000 contracts when the two units were divided. Scitor, therefore, is quite a prize. SAIC describes it as a “leading national security provider” with annual revenues of $600 million, “focused on classified U.S. Air Force and intelligence community programs.”

That’s just the tip of the iceberg. Since its founding in 1979, Scitor has done extensive work for the CIA’s Directorate of Science and Technology and its Office of Technical Services, the secretive unit that develops the gadgets, weapons and disguises used by spies. Some of Scitor’s contracts for the CIA have involved building and maintaining small satellites used in signals and electronic intelligence.

Not surprisingly, Scitor has a sizeable presence in Colorado, which is home to the US military’s Northern Command and the Air Force Space Command. In 2005, Scitor invested over $12 million in a new building in Colorado Springs, where contractors for those commands, including Boeing, Lockheed Martin, Northrop Grumman, and Booz Allen Hamilton, maintain their regional headquarters.

The “Scitor Complex” in Colorado is so integral to the Pentagon that it was the site for a major address on April 16 by Deputy Defense Secretary Bob Work. He delivered a “candid and passionate speech” on the need for the United States to maintain its edge in the “space domain of the 21st century,” the DoD boasted in a news release about Scitor’s “space symposium.”

Similarly, last November, Scitor’s headquarters in Reston, VA was the site for a classified “industry day” on mobile ballistic threats sponsored by the Pentagon’s office for acquisition, technology and logistics.

Scitor is also deeply involved in US military operations. When the Obama administration sent General Stanley McChrystal to Afghanistan in 2009 to command US forces during the counterinsurgency phase of that war, Scitor was one of the companies supplying analysts to McChrystal’s Counterinsurgency Advisory Assistance Team (CAAT).

Among them was Erin Simpson, a popular figure in the “nat sec” space on and currently the CEO of Caerus Associates, a Pentagon and State Department contractor.

According to Caerus documents I obtained, Scitor paid Simpson a base annual salary of $102,000 when she was advising the US-NATO Command in Afghanistan, and she had a Top Secret/SCI (compartmentalized) security clearance. That gave her access to virtually the entire panapoly of US intelligence—SI for signals, TK for classified imagery, and HCS for raw CIA reports from the field. If those are the clearances held by rank-and-file Scitor employees, you can imagine what its top executives get to see and hear (Simpson has declined numerous requests for comment).

Scitor remains engaged in Afghanistan and other wars around the globe. Last October, the Army awarded it a $25.1 million contract for “high-altitude detection” and “technology assessments for counterinsurgency operations.” SAIC will now use Scitor’s experience and contracts to dive back into militarized spying and surveillance work.

“We’ve been assessing the intelligence market since last year, and identified Scitor as our best opportunity,” Tony Moraco, SAIC’s CEO, told analysts in March. “Scitor’s incredibly complementary to SAIC.” The acquisition will undoubtedly boost Moraco’s stock as well: in 2014, he earned $5.77 million in total benefits and a salary of $905,769, according to the Washington Business Journal (that’s “still a bit below the median in the market,” the newspaper added in a revelatory aside).

Despite its high earnings, SAIC had taken some hits in recent years. It’s best known to journalists and the public for mismanaging NSA’s “Trailblazer” system for tracking foreign communications on the Internet. After running through $7 billion, the project was cancelled in 2006—but it planted the technical seeds for the massive global collection system NSA operates today. And despite Trailblazer and other scandals, SAIC continued to win important Pentagon contracts.

In 2014, the Army awarded SAIC a $400 million contract to manage over 200 subcontractors in a five-year project to provide technology to global US military operations. The five-year deal supports the Pentagon’s central commands and special operations forces, and defines SAIC’s broad “mission areas” as “Expeditionary Warfare; Irregular Warfare; Special Operations; Stabilization and Reconstruction Operations.” It was one of the contracts turned over to Leidos after the split, a company source told me.

When that split happened, SAIC, which was doing $4 billion in business, shifted its primary focus to IT and government infrastructure projects. Leidos took the much larger national security and intelligence side of the company and SAIC’s top management; it’s worth over $6 billion today. The goal of the separation, one analyst wrote in 2013, was to establish “a clear distinction” between the two entities. “Where Leidos would design technology for government, SAIC would implement it.”

Their latest deals underscore the differentiation. SAIC recently signed training contracts with the US Navy and the Federal Aviation Administration. Leidos, in contrast, was awarded a prime $7.2 billion contract by the Army Intelligence and Security Command (INSCOM) “to provide global intelligence support services” and a $25 million task order from the Defense Intelligence Agency’s Americas Regional Center to “provide all-source intelligence analysis.”

Both Leidos deals illustrate how deep its influence goes. INSCOM runs many of the listening posts that collect signals for the NSA, which make the agency the de facto backbone of the largest surveillance organization on earth. DIA, of course, is the prime collecter of human intelligence for the Pentagon and its Joint Chiefs of Staff. With Scitor part of its operations, SAIC can now compete with Leidos for this lucrative line of work.

One potential and very probable market for SAIC is the CIA itself, where Scitor is highly valued for its technical expertise. CIA Director John Brennan is currently pushing a radical reorganization that would end the agency’s traditional split between analysis and operations to create separate, hybrid “mission centers” modeled on the National Counterterrorism Center, where analysts and operatives work side-by-side.

Like the NCTC itself, these mini-CIAs would be heavily staffed by contractors. And they are being created at a time when the CIA’s is increasingly seen as a para-military force. For SAIC and Scitor, which both have extensive experience in black ops, Brennan’s future vision for the CIA could be the perfect storm of opportunity.