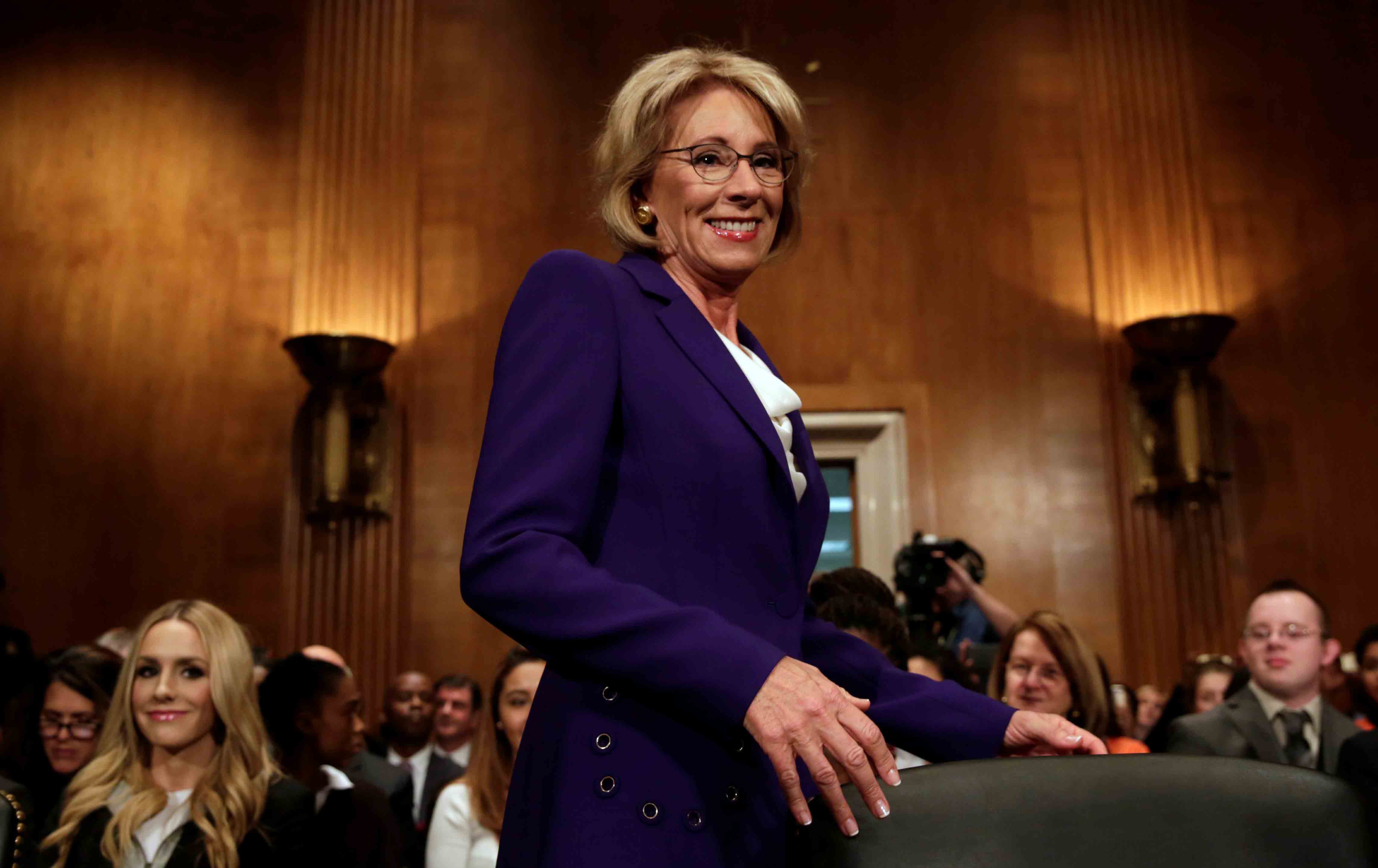 If confirmed as secretary of education, would Betsy DeVos promise not to strip funding from public schools? “I look forward, if confirmed, to working with you to talk about how we address the needs of all parents and all students,” the Republican donor and activist told a Senate committee in response. What are her proposals for making childcare affordable? “I would look forward to working with you,” DeVos responded. Does she support transparency around student loans? “I certainly will look forward to working with you and your colleagues.” Do guns have a place in public schools? That’s “best left to locales and states to decide,” she said, adding that they might be necessary to ward off grizzly-bear attacks. Should all schools that receive taxpayer money be required to provide an equal education to students with disabilities? “I think that is certainly worth discussion,” DeVos said.

How to Do Journalism in Trump’s America

The Coming Crusade Against Public Education

There were plenty of moments in Tuesday’s hearing that betrayed DeVos’s lack of preparation for the country’s top education post, but none more than her stumble over protections for disabled students. Under questioning from Democratic Senators Tim Kaine and Maggie Hassan, DeVos appeared unfamiliar with (or uncommitted to) the Individuals with Disabilities in Education Act, a major civil-rights law that requires publicly funded schools to accommodate disability. The Department of Education distributes about $13 billion to states to help them comply with the law—making it the department’s second-largest K-12 expenditure. Asked whether all schools that receive public money should be required to meet the requirements of that law, DeVos said it was “a matter best left to the states.” Later, when Hassan reminded her that the IDEA was federal law, DeVos backtracked, saying she “may have confused it.”

Do guns have a place in public schools? That’s “best left to locales and states to decide,” DeVos said.

DeVos either could not or chose not to answer most serious policy questions, from inquiries about reporting standards for sexual assault on campus to regulations on for-profit colleges. “It surprises me that you don’t know this issue,” Senator Al Franken told her, after he had to explain the difference between measuring student achievement by growth versus proficiency—a standard debate among educators and policymakers. She offered a wildly inflated figure for the growth in student debt. Asked to account for poor performance in Detroit’s charter schools, which DeVos has fought to shield from stricter accountability measures, she insisted that “a lot that has gone right in Detroit.” Standing in the hallway outside were dozens of parents and students who’d come from the Motor City by bus to oppose her confirmation.

When DeVos did speak specifically, it was to affirm her market-based vision for the education system. She included private schools in her description of what constitutes “today’s public education,” and would not agree that private and charter schools receiving taxpayer money should face the same accountability standards as traditional public schools. She voiced support for “great” public schools, but indicated that those struggling should be abandoned rather than improved. Of the two schools she praised by name, both are private, and one is religious.

Massachusetts Senator Elizabeth Warren pressed DeVos on her lack of experience in higher education. The Department of Education is essentially a bank, managing a $1 trillion student-loan program and distributing $30 billion in Pell Grants. Under questioning from Warren, DeVos—a billionaire—admitted she has no personal or professional experience with student loans or Pell Grants—though, she insisted, she knows people who’ve received Pell Grants. DeVos’s wealth came up during another testy exchange, in which Senator Bernie Sanders asked how much her family had given to the Republican Party over the years. “I have heard the number was $200 million,” Sanders said, after DeVos demurred. She conceded the number was plausible. “I don’t mean to be rude,” Sanders went on: “Do you think, if you were not a multibillionaire, if your family has not made hundreds of millions of dollars of contributions to the Republican Party, that you would be sitting here today?”

“Do you think, if you were not a multi-billionaire...that you would be sitting here today?”

Her struggle with basic questions throughout the hearing made it obvious the answer is “no,” though that probably won’t matter to the Republican majority. Senator Lamar Alexander, the chairman of the Health, Education, and Pensions Committee, tried to contain the damage by limiting members of the committee to one round of five-minute questions, though all Democrats asked for more time, or even a second hearing. Committee members could not fully evaluate any potential conflicts of interest, as an ethics review has not yet been completed for DeVos. And they had little time to dig into the religious motivations for her support of voucher systems. “I don’t know what you are trying to protect Mrs. DeVos from,” Patty Murray, the committee’s top Democrat, said to Alexander. The chairman’s reason for keeping short the hearing was, however, obvious.