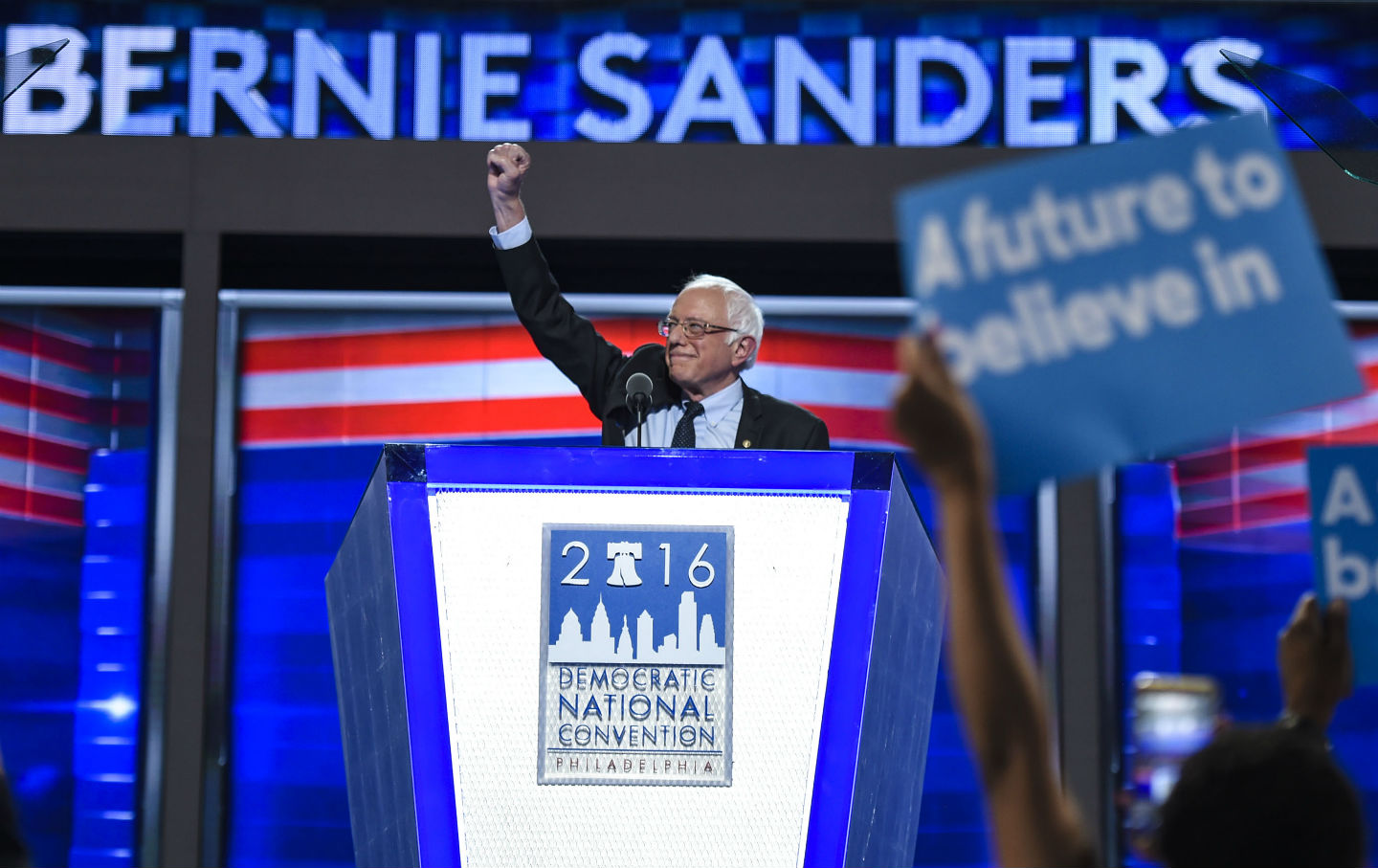 Bernie Sanders takes the stage on the first day of the Democratic National Convention on July 25, 2016. (Photo by Riccardo Savi)

Al Franken couldn’t do it. Elizabeth Warren couldn’t do it. Cory Booker didn’t even come close to doing it. Even Sarah Silverman, may her light ever shine, couldn’t quite do it. Only Bernie Sanders, a charisma-free 74-year-old Brooklyn-born Jewish socialist from Vermont, could have gotten the political revolution close enough to take off to change the national conversation, expand the boundaries of political possibility far over to the left, and demonstrate conclusively the immense power of Americans united against the gilt facade of Citizens United.

Only Bernie Sanders had the power, and the wisdom, not to walk out but instead to deal himself and his supporters in to negotiate the most progressive platform in the history of the Democratic Party.

And having gotten so close—heartbreakingly close. Close enough that many of his own supporters booed him just a few hours ago for daring to point out the F**king Obvious fact that the stakes for themselves, their children, and their country were simply too high to stay home and sulk—only Bernie Sanders could have landed that plane carefully, even delicately, on prime time, with both wings intact and more or less right on schedule.

Not without some turbulence, to be sure. Though the leaked DNC e-mails only confirmed what Sanders and his supporters had known all along, the timing of the leak ensured that feelings would be high in Philadelphia. Debbie Wasserman Schultz’s resignation helped a little. Her total banishing from the convention helped more (and if she comes back to gavel out the proceedings on Thursday night, I hope somebody throws a bucket of water on her).

So when Wellington Webb, the former mayor of Denver, stepped up to the podium to declare, “I’m with her,” he got a rough ride—and it looked like we were in for a bumpy night. The chants of “Bernie! Bernie!” rang out loud and clear and a little bit ugly. Diane Russell, the Maine state representative with impeccable Bernie bona fides—it was she who introduced the amendment to reduce the role of superdelegates—struggled to calm the crowd, finally calling Albus Dumbledore in aid: “It takes great courage to stand up to your enemies. It takes even greater courage to stand up to your friends.”

Franken, who was greeted by a huge round of applause when he took the stage, wisely got off a string of jokes before proclaiming his allegiance. Then Silverman brought the Berners to their feet, executing what would have been the neatest pivot of the night by telling the crowd that Hillary Clinton “heard the people behind Bernie,” and came to embrace their—our—positions. It was pretty to think so, and if Paul Simon had been ready to come out and sing “Bridge Over Troubled Water,” it might have worked. But as Franken ad-libbed to “stretch” their segment he lost the crowd, which again began chanting, “Bernie! Bernie,” prompting Silverman to lose patience, proclaiming, “Can I just say to the Bernie-or-Bust people: You’re being ridiculous.”

I’d have said they were heartbroken, but Silverman had a point. Anyone who can’t see that what Donald Trump and Mike Pence would do in government—not just to the Supreme Court, but to the Constitution and the Bill of Rights—represents a clear and present danger far greater than the inevitable disappointments of a Clinton presidency needs to grow up. Or check your privilege. Because the people who really need the government—for protection, for treatment, for education, for shelter—are counting on us to get over ourselves.

Which doesn’t mean I’ve enjoyed the demonization of Sanders supporters by over-zealous Clintonites either. Leslie Lee is no “Bernie Bro”—he’s the African-American Sanders activist who coined the hashtag #BernieMadeMeWhite. He told me he came to Philly “to see the Bernie revolution firsthand and share the stories of the people who are a part of it.… TPP, fracking, and climate change, and getting money out of politics are the main issues people are concerned about, and they’re tired of being ignored by both the media and the Democratic Party.”

Elizabeth Weill-Greenberg, a Bernie delegate and member of the platform committee from New Jersey—and a former Nation intern!—said she thought the bitterness on display this afternoon was because “this is a party to celebrate Clinton and the DNC and they don’t feel there is anything to celebrate, so they are going to make sure their opposition is heard. They feel that the election was rigged against Bernie and they want to remind everyone here of the problems with the DNC and Clinton.”

Just as the Democratic primary season was never going to be a fair fight, bringing the party together was never going to be easy. Bernie had to bring his people along slowly—though when I spoke to Dottie Deans, chair of the Vermont delegation, she said her state, which Sanders carried by a huuuge margin, was ready for unity.

My own view is that Sanders might not have made it without Michelle Obama. Before she came on, I thought the best speech of the night was given by a man who has actually been dead for over a year. But not even Mario Cuomo outshone Obama. In the quiet tones of a woman in her own kitchen, the first lady reminded the convention how far this country had come: “I wake up every morning in a house that was built by slaves.” When she reached the line about watching her daughters, “two beautiful and intelligent young black women,” playing on that White House lawn with their dogs, a lot of us were crying. And while other speakers praised Clinton and were booed for it, no one dared disrupt Michelle Obama.

Her soaring message made an odd lead-in for Elizabeth Warren—the first speaker of the night to acknowledge how much remains to be done (and, implicitly but unmistakably, how much the Obama administration has left undone). Warren was lethal on Trump, but otherwise pedestrian; those who think she’d have won the nomination in a walk got no help tonight.

But what she did perfectly was to set the stage for Sanders, who after a brief medley of his campaign speeches—including, to my great delight, the call-and-response for $27—gave it to us straight: “If you think you can sit it out, take a minute to think about the Supreme Court justices Donald Trump would appoint—and what that would mean to civil rights and civil liberties.” Sanders made it clear he was taking this election personally—and would continue to strain every sinew to put his former opponent in the White House.

Because, as Bernie has always told us, this isn’t about him. Because he’s a grownup—and he knows what’s at stake. It can’t have been easy—especially after those (new) damned e-mails. I just hope Hillary is grateful. Hell, if she wins I hope they erect a huge statute of Bernie on the Mall. Pointing his finger. Paid for by public subscription. At an average donation of… $27.