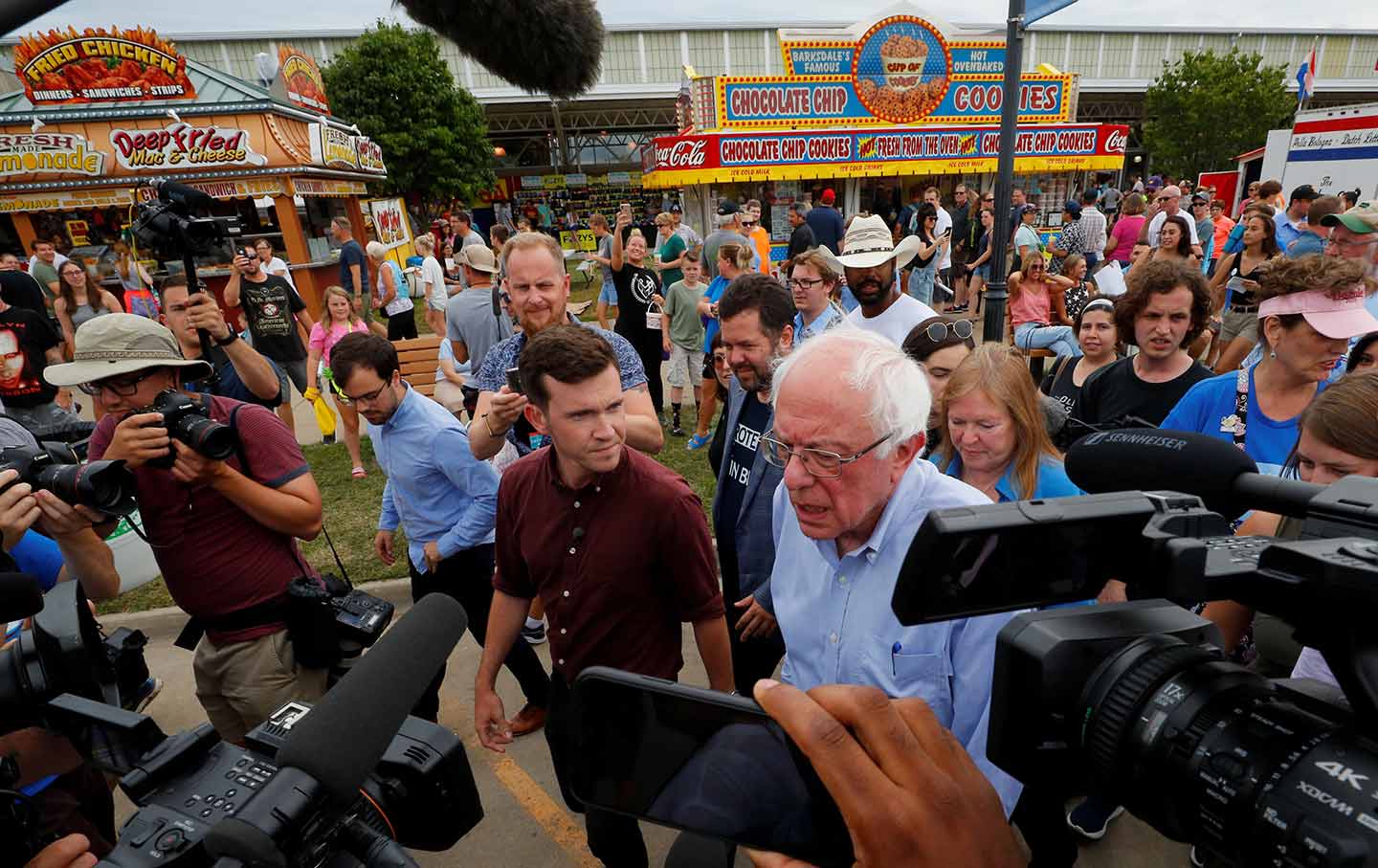 Bernie Sanders will have a prime spot on the next Democratic presidential debate stage in Houston, and he will undoubtedly participate as aggressively as the other leading contenders for the party’s 2020 nomination. But the senator from Vermont makes no secret of his frustration with the scope and character of the debates. When I asked him about that frustration during a conversation in Orient, Iowa, earlier this month, he sighed and said, “Well, I should think that anybody would express frustration with the debates.”

The trouble, Sanders told me, is that “you have a limited amount of time to answer questions. This country faces enormous crises, and you can’t do it in 45 seconds or a minute. That’s just the simple reality. And I understand the problem of how many candidates are running. But we need a political structure in this country which allows serious debate about serious issues, and the structure of those debates makes it impossible I think for any candidate to do more than shout out a sound bite.”

One of the sound bites that came out of the second round of debates in Detroit involved Sanders pushing back against a question from CNN anchor Jake Tapper about imposing taxes on the middle class to pay for Medicare for All health care reform. The senator accused the moderator of using “Republican talking points” to stir up a Democratic debate. “And by the way,” Sanders concluded during that debate exchange, “the health care industry will be advertising tonight on this program.”

That may have sounded conspiratorial to some of the senator’s critics. But, the candidate noted, “There was, in the middle of that debate—I mean, this is how absurd it is—a commercial coming from the health care industry echoing exactly what the moderator spoke about.”

Critiquing media coverage of debates and campaigns, issues and ideas is nothing new for Sanders. He has been calling out “the corporate media” in much the same language that he now employs for decades. When Robert W. McChesney and I were writing about media and democracy issues in the mid-1990s, Sanders, who was then serving in the House of Representatives, and Minnesota Senator Paul Wellstone were among the rare members of Congress who recognized that the conglomeration of media ownership—and the influence of this consolidated media on our politics—could not be ignored.

McChesney and I spent a good deal of time interviewing the few members of Congress who were familiar with the issues. We appeared on panels with them, discussed, and debated. We did not always agree. But there was never any doubt about the sincerity of the concern expressed by Sanders and Wellstone, or the fact that it was rooted in a broader interest in the democracy issues that arise when the media landscape and the politics of a nation are being rapidly reshaped by economic and technological changes. “Common ownership and control is not conducive to diversity of viewpoints and perspectives,” explained Wellstone, in the introduction to one of our books, which was published a few years before his death in 2002. “And as these far-flung multinational corporations extend their holdings and influence into more and more new industries—with interests of their own, as regards regulation in particular—how much confidence can we have that they will hold any of those interests accountable to the people?” At town halls, media conferences, and television interviews with Bill Moyers, Sanders spoke in similar terms; and he has continued to do so as an outspoken critic of ongoing media consolidation, and as a steady defender of net neutrality and public broadcasting.

Sanders made a critique of media coverage of his 2016 presidential bid a part of that campaign, and he is doing so again this year. “The media has been a source of real frustration,” the senator told me on Sunday, arguing that “they’re either ignoring us or being incredibly hostile.”

When Sanders talks about an unsympathetic media, it can sound like the typical talk of a political figure who is not getting the coverage he wants. Noting the senator’s recent complaints about coverage by The Washington Post and other news outlets, a veteran writer and thinker on media matters, Paul Waldman, wrote the other day, “This gives him something in common with pretty much every candidate, not to mention every president. Because they’re human, they fixate on the stories that get something wrong or characterize something in ways they don’t like, and they lament it when the things they do and say don’t get the level of attention they believe they deserve.” Waldman’s Post piece also suggested that when a candidate like Sanders discusses the influence of media owners on media coverage, and laments bias, he may simply be “working the refs” in an effort to get more favorable attention—or seeking to “energize his supporters, who see him as a rebel fighting an establishment that is terrified of him and will do anything to stop him.”

Sanders has confronted these sorts of objections before. It is one of the reasons why he makes a point of distinguishing himself from other political figures who gripe about media coverage—especially the man he hopes to face in the 2020 election. “We’ve got to be careful,” he says. “We have an authoritarian type president right now, who does not believe in our Constitution, who is trying to intimidate the media and so forth and so on. That’s not what we do. But I think what we have to be concerned about in terms of the media is that you have a small number of very, very large corporate interests who control a lot of what the people in this country see, hear, and read. And they have their agenda. That’s what they are.” In our conversation, the senator argued that this agenda tends to dumb down the discourse, by marginalizing ideas and candidacies that “challenge the economic and political establishment.”

In mid-August, Sanders echoed that argument in an e-mail to supporters that placed his assessments of coverage of his candidacy (“When we trail in a poll, it gets endless coverage. When a poll is great for us, it barely gets a mention”), and the campaign in general (“It is my sincere hope that we can spend more time talking in depth about the issues facing the working people of this country and less time covering the latest scandal or political gossip”) in a broader context.

“Even more important than much of the corporate media’s dislike of our campaign is the fact that much of the coverage in this country portrays politics as entertainment, and largely ignores the major crises facing our communities,” wrote Sanders. “In fact, what I have learned from experience is that, as a general rule of thumb, the more important the issue is to large numbers of working people, the less interesting it is to the corporate media. Sadly, for the corporate media, the real issues facing the American people—poverty, the decline of the middle class, income and wealth inequality, trade, health care, climate change, education etc.—are fairly irrelevant.”

Coming at a point in a national campaign when many voters and many in the media are getting a sense of Sanders, that might sound like a stark statement. But this is a point he has been making for decades. And it is the point he made in late August when he introduced a series of savvy media reform initiatives with a declaration that, “We need to rebuild and protect a diverse and truly independent press so that real journalists can do the critical jobs that they love, and that a functioning democracy requires. When I am president, my administration will put in place policies that will reform the media industry and better protect independent journalism at both the local and national levels.”

To that end,  Sanders proposes to:

Sanders focuses attention on supporting local journalism–distinguishing between “the corporate media” and local newspapers and radio and television stations, which he says “do a pretty good job.” (Unfortunately, local media outlets are rapidly being bought up, downsized, and dumbed down.)

Sanders also recognizes that there are many factors that shape debates about the major issues facing the United States, including the ability of corporations and billionaires to move money into politics, hire lobbyists, and launch advertising campaigns that distort not just the debate but reality. “The only reason we haven’t changed the system and moved to Medicare for All,” he says, “is the incredible power of the health care industry, which made $100 billion in profit last year and is prepared to spend hundreds of millions of dollars or more to defeat our efforts to create a Medicare for All, single-payer system.” The problem, argues Sanders, is that, instead of bringing clarity to discussions about complicated issues, major media outlets often let the distortions favored by the corporations be viewed as “one side of the debate.”

That’s an objection to the corporate media that’s at least as old as Manufacturing Consent: The Political Economy of the Mass Media, the 1988 book by Edward S. Herman and Noam Chomsky, and the many editions of The Media Monopoly, the groundbreaking 1983 book by former Washington Post reporter Ben Bagdikian. In the 2004 edition, Bagdikian concluded that “the awesome power of the contemporary mass media has in one generation been a major factor in reversing the country’s progressive political, economic and social momentum of the twentieth century. As a result, in the United States, the twenty-first century inherited a new, more extreme brand of conservative policies.”

Sanders knows and advances this critique.

Yet the senator is doing more than just bringing an old argument into a new campaign. He notes that the radical transformation of communications, in a digital age when so-called “old media” and “new media” are both sources of information and ideas, has made it possible to connect with voters directly. Just as the former president he most frequently references, Franklin Delano Roosevelt, used the relatively new medium of radio to hold “fireside chats” with Americans at a time when major media outlets were hostile to the New Deal, so Sanders says his campaign is connecting with a new generation of voters.

“That’s what our social media is about,” Sanders explains. “Look, we have more folks on our social media than anybody except Donald Trump, and Donald Trump understands that point. People don’t talk about it enough, the incredible amount of folks that he has on Twitter and Facebook and all that stuff. And that is a very powerful organ of dissemination for Trump. Now we are nowhere near where he is. But we have a lot of people on Facebook, on Twitter, on Instagram, who use it every single day. So certainly one of the technological breakthroughs that has been of help to us in an ability to circumvent corporate media is to talk directly to people, and we do that virtually every day.”

This article was updated to include details of the senator’s media reform agenda, which was released in late August.