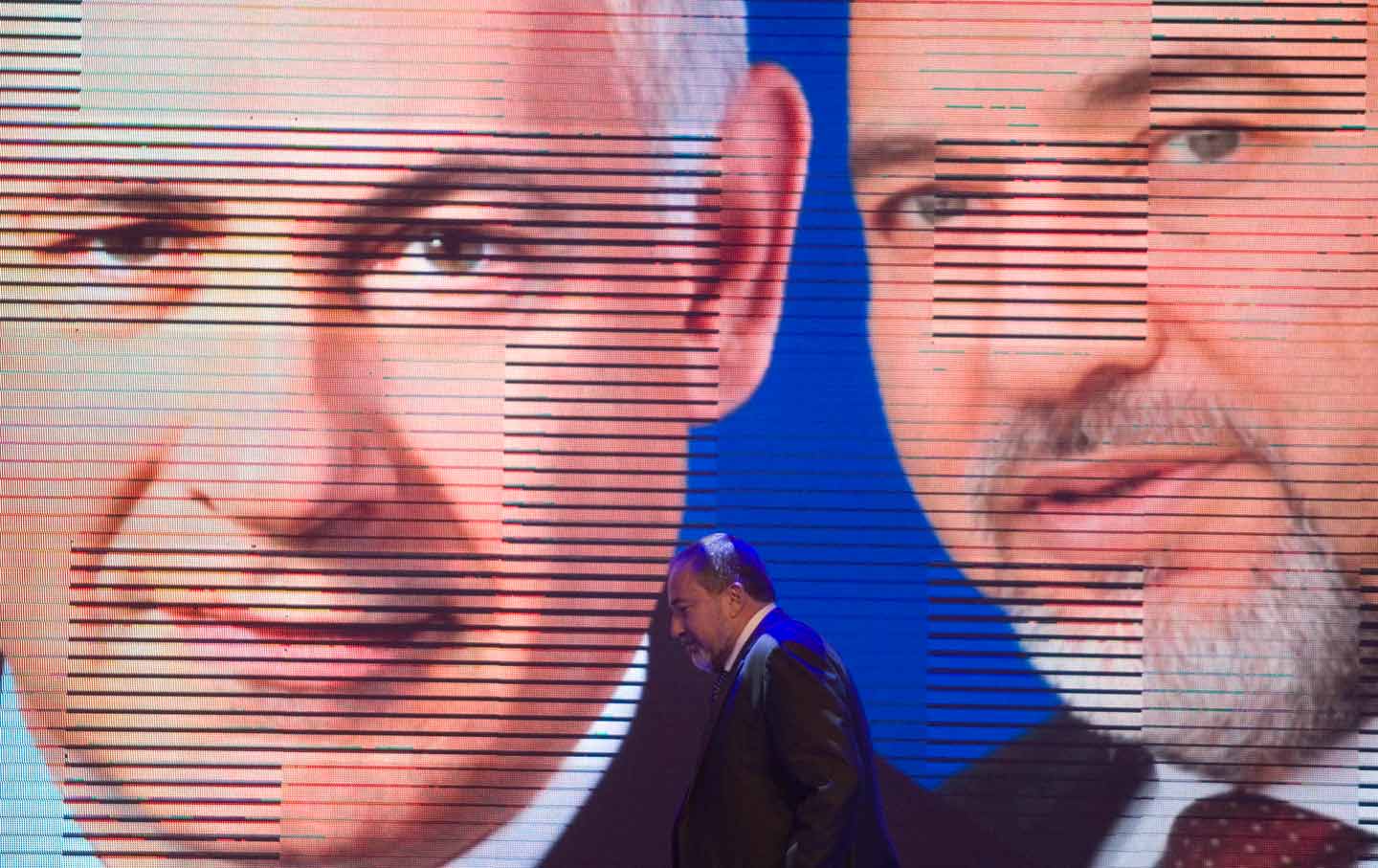 Avigdor Lieberman—Israel’s new defense minister—walks under a screen showing him and Israeli Prime Minister Benjamin Netanyahu during the inauguration of their election campaign in Jerusalem, 2012. (AP Photo / Dan Balilty, File)

The recent political reshuffling in Israel’s governing coalition will put the unbridled nationalist Avigdor Lieberman in charge of the defense ministry and seal the creation of the most overtly right-wing government in Israeli history. It is an accurate reflection of how far to the right Israel’s political consensus has shifted and where the dividing lines in society now lie.

The moment Lieberman’s appointment was announced and Defense Minister Moshe Ya’alon found himself out of a job, the latter suddenly appeared to be moderate, reasonable—practically a lefty in comparison. Remember, Ya’alon is the military careerist who oversaw the IDF’s last two Gaza operations, which caused massive Palestinian civilian deaths and destruction; he is the man who called US Secretary of State John Kerry “obsessive” and “messianic” for trying to gets Israelis and Palestinians to negotiate a two-state solution; and who called Peace Now a “virus” back in 2009 and recently accused Breaking the Silence of treason and espionage. He is, to put it mildly, no dove.

But what separates him from Netanyahu and Lieberman is how he responded to the IDF soldier’s execution of a wounded, prone Palestinian assailant in Hebron at the end of March. While Ya’alon immediately called the soldier a “transgressor” who should be brought to justice and assured that he was a rotten apple in an otherwise moral, just army, Netanyahu and Lieberman backed the soldier, the former implicitly and the latter explicitly.

A majority of Israelis sympathize with the soldier who carried out a cold-blooded execution of a wounded Palestinian.

The Hebron execution, documented in full and exposed to the public thanks to the human rights group B’Tselem, exposed a divide between those who want to give the soldier a medal and those who want to see him and his commanders brought to justice. This incident is a credible marker of one of the biggest political divisions in Israel, which we are now seeing unfold in the corridors of Knesset: those who believe IDF soldiers should still be subject to some rule of law and normative ethics, that the IDF is or should strive to be the “most moral army in the world,” and those who believe that “security considerations” trump everything, especially when it concerns the Palestinians. A poll at the time found a majority of Israelis sympathized with the soldier, with 68 percent opposing the condemnation of the shooter, distinctly putting Ya’alon’s worldview in the minority. In 2016 Israel, Ya’alon, a career army officer and former chief of general staff who believes in the valor and “purity of arms” of the IDF, is now being portrayed as a moral, responsible centrist. Some have even joked in recent days that he has become the new opposition leader in Israel.

This is frightening not only because it demonstrates just how far to the right Israeli society has shifted, but because Ya’alon is precisely the kind of public figure who has entrenched Israel’s military occupation while making it seem like a necessary, even benevolent, part of Israeli democracy. By pointing to some bad apples in the IDF as a way of sanctifying the military, he is able to divert attention from the fact that Israel’s infrastructure of control over millions of Palestinians is fundamentally unacceptable and cannot be reconciled with morality. In this sense, his “reasonable” approach to occupation is much more dangerous and more deceitful than Lieberman’s openly belligerent one.

For the tiny minority of Israelis who see the occupation as the most pressing problem in the country and who are dedicated to challenging the way Israeli society operates and defines itself, Lieberman as defense minister is not that shocking or disturbing. He is not an aberration from the norm. He is a reflection of the consensus—not the problem, just a symptom.

This is because the division between Netanyahu/Lieberman and Ya’alon exists within the framework of a status quo in which there is no fundamental questioning of Israel’s perennial control over millions of Palestinians; where daily, systematic violence and human-rights violations against a stateless people with no civil rights does not constitute occupation, just something necessary, something temporary, something that is somehow removed from the essence of society. As a recent poll by the Israel Democracy Institute demonstrates, 72 percent of Jewish Israelis do not believe Israel’s control over the Palestinian territories constitutes occupation (it is unclear what they think it is). This is the contemporary Israeli consensus.

During Israel’s premier Friday night-news broadcast, which last week focused on Netanyahu’s latest political wheeling and dealing, Roni Daniel, a hawkish, veteran military analyst known for playing the role of IDF cheerleader on national TV, suddenly declared, in an uncharacteristically emotional monologue, “After this week, I’m not sure I want my children to remain here.” Not because of Lieberman, Daniel said, since “Lieberman can’t go and bomb the Aswan Dam or Gaza without the IDF and security cabinet’s approval, so everyone should calm down.” Rather, he attributed it to “the culture of government” and the fact that Israel “is not a pleasant place to be.”

For such a figure, who, like Ya’alon, has devoted his life to the military, admitting that Israel may not be the best place to raise your children is groundbreaking. It may even be the beginnings of a crack in the system. But he, like most Israelis, is still blind to the problem right under his nose. Israel cannot live by the sword and commit systematic human- and civil-rights violations without suffering the consequences of, among other things, its own moral degradation.