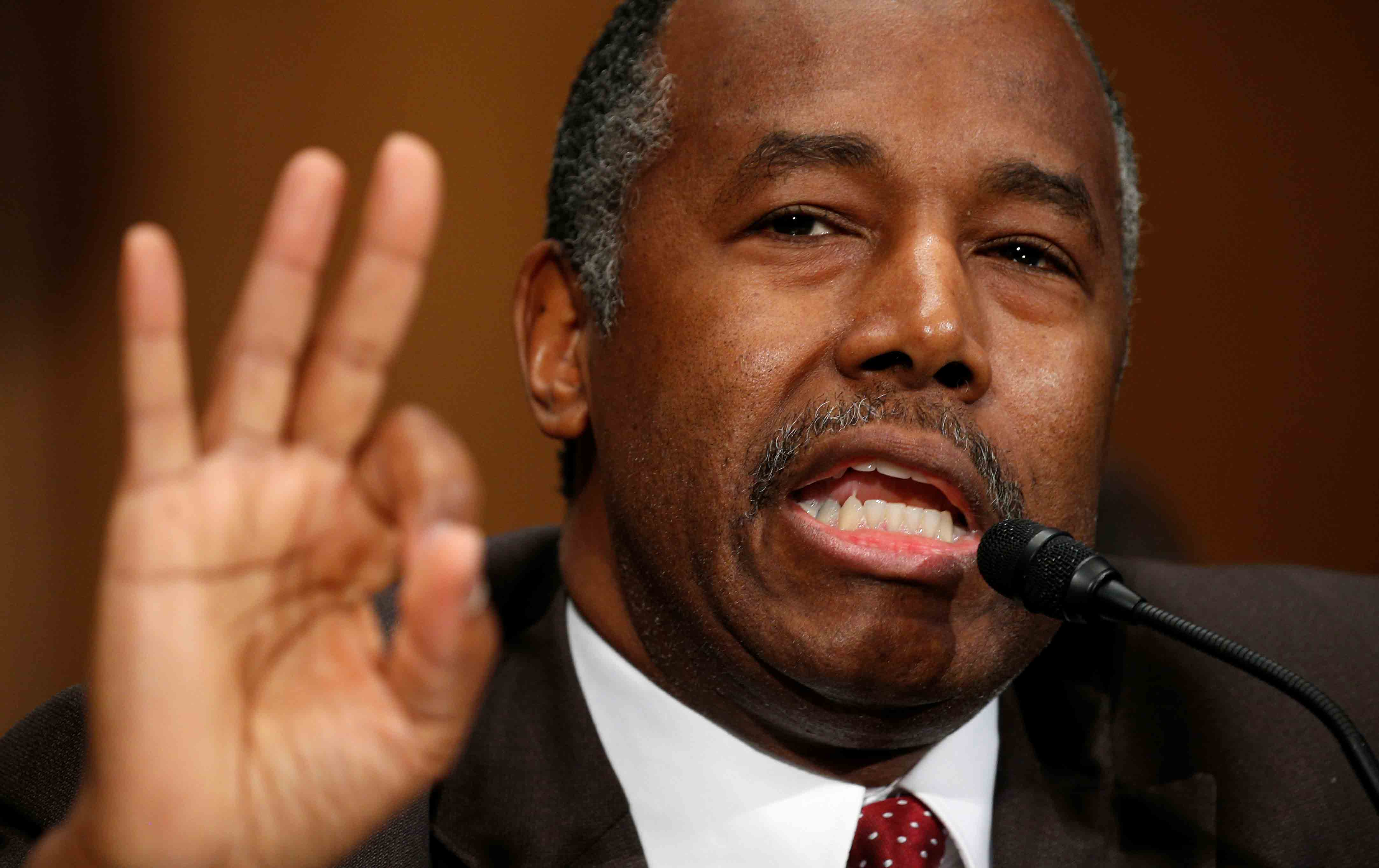 Ben Carson at a confirmation hearing for secretary of Housing and Urban Development on January 12, 2017. (Reuters / Kevin Lamarque)

“Ben Carson Urges Ending Reliance on Welfare in Bid to Be Housing Chief,” read the headline in The New York Times. This is like saying “James Mattis Urges Investment in National Parks in Bid to Run the Pentagon.” One has little to do with the other. The Department of Housing and Urban Development does not manage Temporary Assistance for Needy Families funds. Its work mostly features distribution of Section 8 housing vouchers, a phrase that didn’t come up in Carson’s confirmation hearing on Thursday. In fact, there was more talk at the hearing about the buffalo in Jon Tester’s office (which Carson admired) than the adequacy of low-income housing assistance in America.

And this was the way the hearing went for the most part. Carson was comfortable opining about the minimum wage, overtime laws, tax reform, the budget deficit, health care, and education, and less so about housing discrimination, community-development block grants, FHA mortgage insurance, distressed-asset sales, and other building blocks of HUD. He displayed interest in HUD policies at rare moments, like the (noble) willingness to work to reduce lead exposure in public housing projects. But he offered no real rationale for why a career neurosurgeon, political gadfly, and presidential candidate should be put in charge of an office dedicated to housing policy.

Someone in Carson’s orbit knows a fair bit about housing. That would be whoever penned his written statement for the record, which showed command of the details of HUD’s Safe and Healthy Homes program, land-use regulations, housing finance, homelessness, community development, the banking industry’s reluctance to use FHA programs, and declining homeownership rates. I don’t agree with all of the ideas in there—for instance, I don’t think access to credit is as much of a problem in housing as income stagnation and the scars of the foreclosure crisis—but it hewed to a knowledgeable conservative line about core HUD issues.

The problem is that Carson didn’t read a word of that statement. His opening remarks mirrored something he might have said at a town-hall meeting in New Hampshire, mostly using his rags-to-riches biography as an example for how to pull yourself up by your bootstraps without the heavy hand of government. That continued through the questioning. When asked by Senator Thom Tillis (R-NC) if HUD has “gone from providing housing to providing warehousing for an unacceptable number of people,” Carson said the latter. When the nominee meandered into discussing labor-market policy, he said he didn’t support the minimum wage as much as “increasing opportunities for them and creating environments for those opportunities to exist, rather than artificially trying to change it.”

To the extent that Carson was aware of HUD policies, he mostly agreed with whoever his questioner was. When Brian Schatz (D-HI) asked whether he would fight for HUD’s share of appropriations, Carson wanly agreed (though I’m not sure he has another emotional level to share). When Sherrod Brown (D-OH) and Bob Menendez (D-NJ) asked if he would enforce HUD’s new rule known as “affirmatively furthering fair housing,” which on the campaign trail Carson likened to “social engineering,” Carson said he would follow the law (again, wanly).

Given that cabinet nominees will be delegated an unusual amount of authority under Donald Trump, I hope Carson brings that speechwriter with him to actually manage the department. Certainly trade groups are excited about the opportunity to mold a HUD secretary like clay; the Mortgage Bankers Association has enthusiastically expressed their support.

But Democrats didn’t really challenge Carson in the hearing at all. A few sought to clarify Carson’s comments, but they did not challenge the premise of his nomination or his qualifications for the job. Even Elizabeth Warren’s usual hard edge was channeled into a hit on Trump—she got Carson to admit he had no way of knowing whether the affordable-housing grants and loans that HUD issues could financially benefit Trump or his family’s real-estate business. This did lead to the classic Carson gaffe, “It will not be my intention to do anything to benefit any American,” but it wasn’t really directed at him. Based on this hearing, he will sail through confirmation.

If he digs in on housing and health as a signature issue and manages to keep the rest of the department functional, that will probably lead to a fair bit of deregulation and resource-starving, but may not be completely terrible. In fact, compared to the rest of the team announced that deals with financial regulation, Carson’s an outright plum.

Goldman Sachs will need a team of headhunters to replace all the former executives entering the Trump administration. Two more alums, Dina Powell and Anthony Scaramucci (a former Goldman manager who later ran a hedge fund), joined up this week, bringing the total alums to six, with a seventh, Jim Donovan, poised to become the Treasury undersecretary for domestic finance, a key banking policy-making role. Jay Clayton, a corporate lawyer from Sullivan and Cromwell, represented Goldman Sachs, and now he’ll effectively do the same as chair of the Securities and Exchange Commission. Clayton’s wife is currently a Goldman Sachs broker, so he would have to recuse himself from enforcement decisions involving the investment bank, but not from general rule-making that Goldman could also benefit from. (Mary Jo White, the SEC chair Clayton will replace, had a similar recusal issue with her husband, a corporate lawyer. Banks would seemingly sign up with his firm as a way to knock White out of enforcement calls against them. The more things change…)

Some of the non-Goldman types may be even worse. Trump is rumored to choose David Malpass for Treasury undersecretary for international finance; Malpass literally was the chief economist at Bear Stearns before they went under, and wrote a column headlined “Don’t Panic About the Credit Market” in August 2007, the precise moment to properly panic about the credit market. For the Commodity Futures Trading Commission, which polices the multitrillion-dollar derivatives market, Trump wants to promote Christopher Giancarlo, a current Republican CFTC Commissioner and former executive of derivatives trading company GFI Group. Giancarlo’s most notable feat on CFTC was appointing industry executives to an advisory group that wrote a dubious report recommending an overturning of a rule designed to limit speculation in oil and other futures markets. CFTC decided in December to delay the final rule, meaning Giancarlo will be in prime position to kill it.

So compared to the nest of vipers Trump has in place at most of the financial regulators, maybe an amiable man with no idea of the controls he’s been handed represents a step forward.