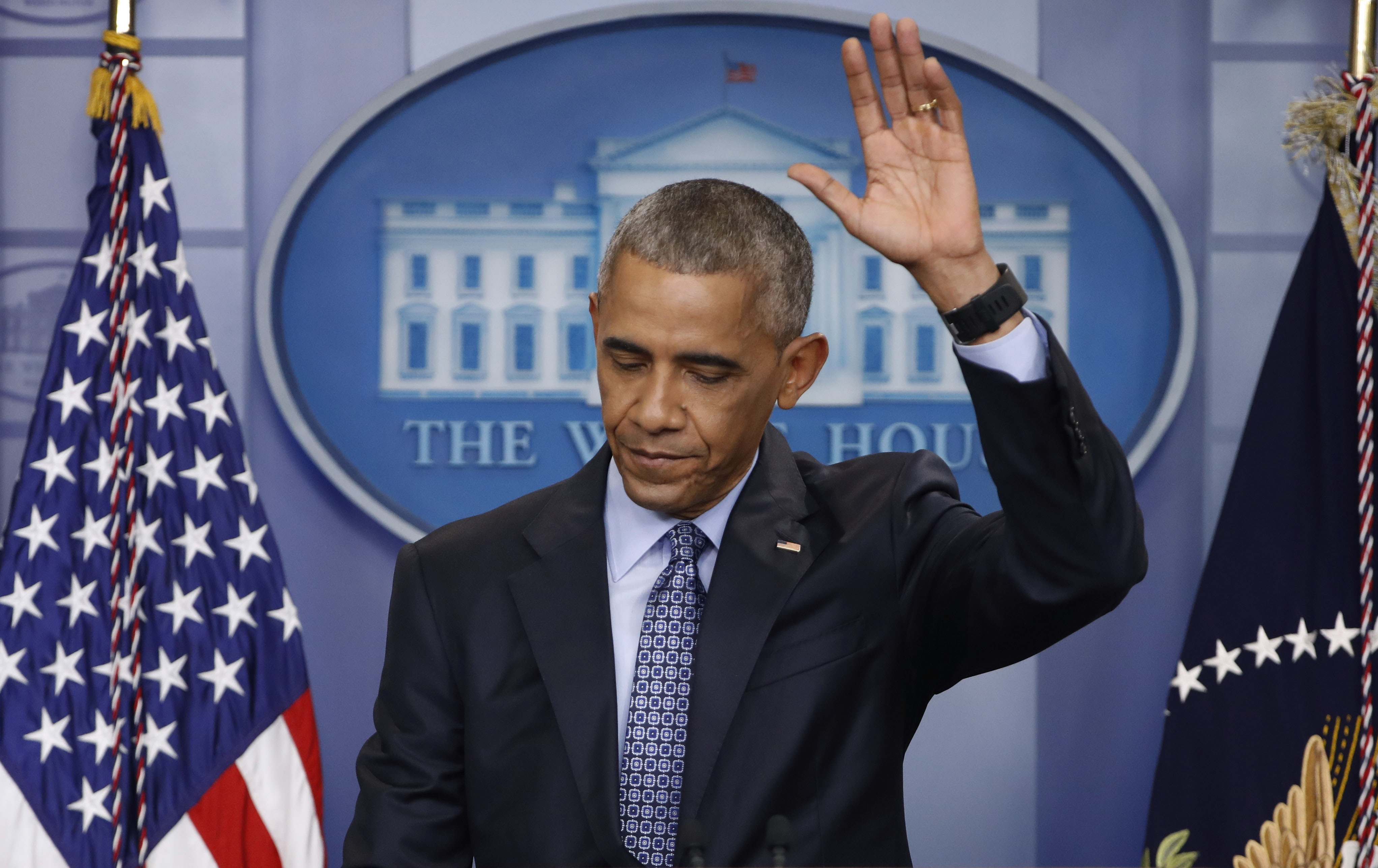 The president, who had swept to power with a landslide victory, did not speak eight years ago of what he might do. He spoke, in the face of economic uncertainty the likes of which America had not experienced since the Great Depression, of what the people might do:

So let us mark this day with remembrance of who we are and how far we have traveled. In the year of America’s birth, in the coldest of months, a small band of patriots huddled by dying campfires on the shores of an icy river. The capital was abandoned. The enemy was advancing. The snow was stained with blood. At the moment when the outcome of our revolution was most in doubt, the father of our nation ordered these words to be read to the people:

“Let it be told to the future world…that in the depth of winter, when nothing but hope and virtue could survive…that the city and the country, alarmed at one common danger, came forth to meet [and replulse it].”

America: In the face of our common dangers, in this winter of our hardship, let us remember these timeless words. With hope and virtue, let us brave once more the icy currents, and endure what storms may come. Let it be said by our children’s children that when we were tested we refused to let this journey end, that we did not turn back nor did we falter; and with eyes fixed on the horizon and God’s grace upon us, we carried forth that great gift of freedom and delivered it safely to future generations.

There was an optimism in Obama’s message, an optimism that extended from his own campaign promise of “hope and change.” But it had deeper roots. In his first formal message to the nation he would lead through a period of remarkable technological and human progress, Obama took inspiration from the most visionary of this country’s founding generation: Thomas Paine.

The words Washington ordered read to troops encamped along the Delaware River in December 1776 came from the first of Paine’s pamphlets on “The American Crisis.” Paine began that pamphlet by acknowledging a dire circumstance: “THESE are the times that try men’s souls. The summer soldier and the sunshine patriot will, in this crisis, shrink from the service of their country…”

Those unsettling words have been reread frequently in times of American peril and uncertainty, and they resonate with many Americans as Obama’s presidency gives way to that of Donald Trump. But Paine’s vision was, ultimately, a hopeful one. The pamphleteer observed that “Tyranny, like hell, is not easily conquered; yet we have this consolation with us, that the harder the conflict, the more glorious the triumph. What we obtain too cheap, we esteem too lightly: it is dearness only that gives every thing its value. Heaven knows how to put a proper price upon its goods; and it would be strange indeed if so celestial an article as FREEDOM should not be highly rated.”

“We have to re-examine just the flood of endless money that goes into our politics, which I think is very unhealthy.”

On Wednesday, during a gracious and reflective final press conference, President Obama was asked frequently to discuss the issues that try his soul. He answered with expressions of concern about inequality and the many crises that extend from it, explaining that “you don’t want to have an America in which a very small sliver of people are doing really well, and everybody else is fighting for scraps, as I said last week. Because that’s oftentimes when racial divisions get magnified, because people think, well, the only way I’m going to get ahead is if I make sure somebody else gets less; somebody who doesn’t look like me or doesn’t worship the same place I do.”

“That’s not a good recipe for our democracy,” argued the outgoing president. “I worry about, as I said in response to a previous question, making sure that the basic machinery of our democracy works better. We are the only country in the advanced world that makes it harder to vote rather than easier. And that dates back. There’s an ugly history…that we should not be shy about talking about.”

And then Obama offered some of the most pointed remarks of his presidency:

The reason that we are the only country among advanced democracies that makes it harder to vote is—it traces directly back to Jim Crow and the legacy of slavery and it became sort of acceptable to restrict the franchise. And that’s not who we are. That shouldn’t be who we are. That’s not when America works best. So I hope that people pay a lot of attention to making sure that everybody has a chance to vote. Make it easier, not harder.

This whole notion of…voting fraud, this is something that has constantly been disproved. This, this is fake news. The notion that there are a whole bunch of people out there who are going out there and are not eligible to vote and want to vote. We have the opposite problem. We have a whole bunch of people who are eligible to vote who don’t vote. And so the idea that we put in place a whole bunch of barriers to people voting doesn’t make sense. And then the…political gerrymandering that makes your vote matter less because politicians have decided you live in a district where everybody votes the same way you do so that these aren’t competitive races and we get 90 percent Democratic districts, 90 percent Republican districts, that’s bad for our democracy too. I worry about that.

There are many measures of presidential distinction, but what distinguished Obama during his years in office was the seriousness of his concern for the health and vitality of the American experiment that Paine and his compatriots began. During a presidency that saw the US Supreme Court mangle democracy with its Citizens United v. FEC ruling, Obama spoke often about the corrosive influence of money on our politics and governance. And he did so once more before the transition of power to a new administration that will be packed with billionaires and their acolytes.

“I think at some [point]—and this will require some action by the Supreme Court—we have to re-examine just the flood of endless money that goes into our politics, which I think is very unhealthy,” said the president, who during his tenure spoke of how either a new court or a new constitutional amendment would be necessary to undo the damage done by the Citizens United ruling.

That’s an audacious vision. Perhaps some will think it too bold speak of renewing and extending democracy on the cusp of a Donald Trump’s presidency that threatens to diminish voting rights and popular sovereignty. But, of course, the renewal and extension of democracy is precisely what is needed to challenge a new chief executive who lost the popular vote and whose legitimacy has been questioned by senior members of Congress.

But not too audacious, not too bold, for a president who began his tenure by quoting Tom Paine—and who finished it by expressing a Paine-like faith in the American people and in a long arc of history that bends toward justice.

“We just have to fight for it,” Barack Obama concluded. “We have to work for it and not take it for granted…”