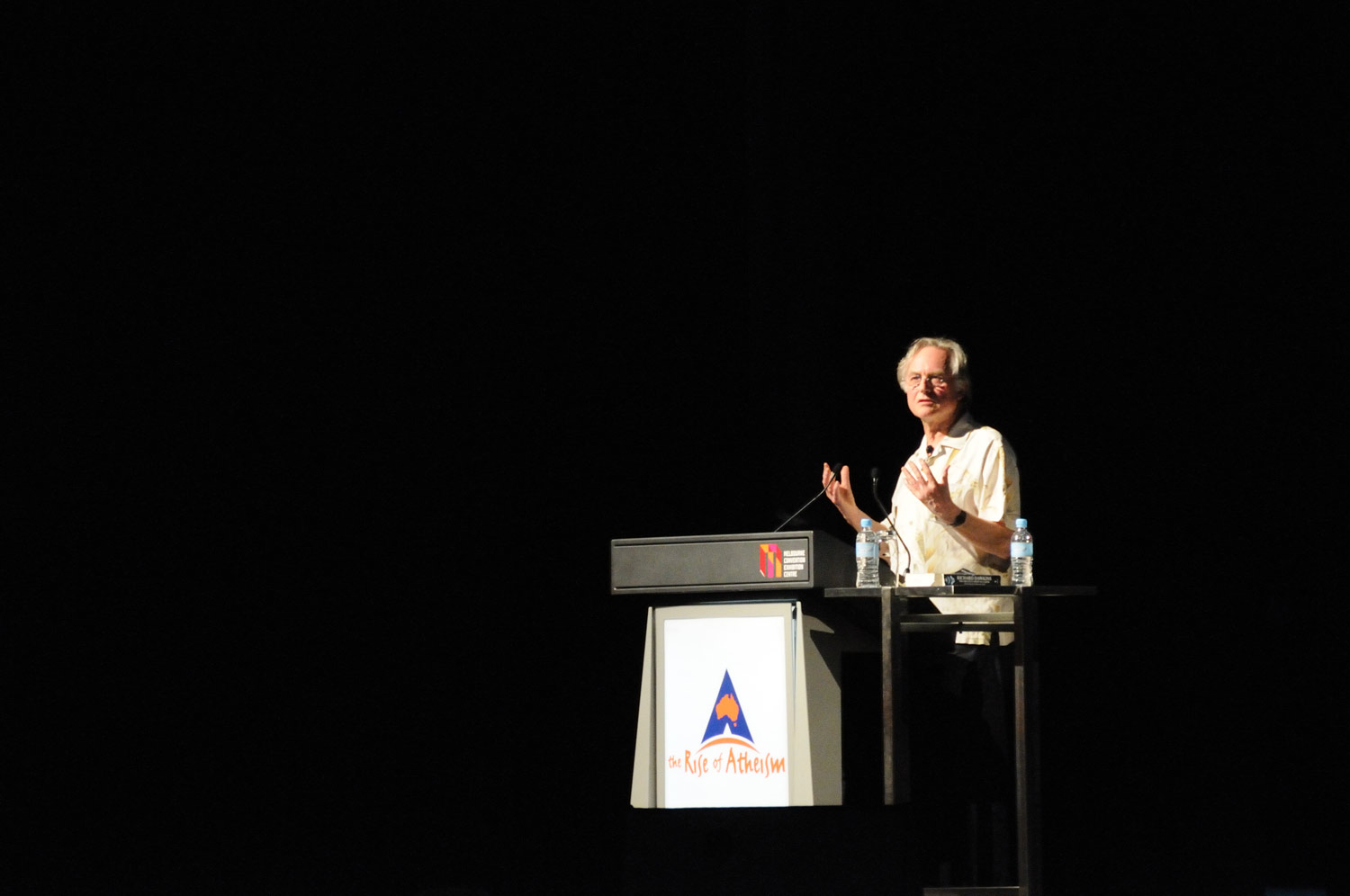 Here’s a great way to make a movement: have your most famous and powerful public figures obsess over Henry Higgins’s famous question, “Why can’t a woman be more like a man?” Why aren’t they more into critical thinking, argument, logic? more rational? Why do they accuse a man of sexual harassment when he’s just trying to chat them up in an elevator at 4 in the morning? Why do they get drunk and then accuse men of rape? Then, having alienated a huge number of actual and potential members, to whom you sound arrogant, vain, sexist and clueless, look around and wonder, Gee, where are the women? They must be even less rational than we thought!

Atheism is having a moment. Rigid, reactionary Christianity may have captured the Republican Party, but it’s turned off millions. According to Pew, some 20 percent of Americans have no religious affiliation, including 32 percent of those 18 to 29—there are more “nones” than there are white evangelicals. True, only 2.4 percent describe themselves as atheists (up from 1.6 in 2007), but that still means there are more self-identified atheists than there are Jews, Muslims or Mormons. It’s the perfect time to put our best godless foot forward—to connect with other progressive movements, and to put out the welcome mat for all those millions of new-made unbelievers. And that means looking in the mirror in order to broaden a movement that has historically been white, male, middle-class and culturally rather narrow.

But that would be way too, um, rational. Instead, organized atheism is having a sexist tantrum. As Mark Oppenheimer recently described on BuzzFeed, women who say they have been sexually harassed—or, in one case, raped—at conferences by powerful older men have been mocked, told to be quiet, and dismissed as sluts and liars. When Rebecca Watson, who blogs as Skepchick, expressed annoyance after a man accosted her in an elevator late at night at the 2011 World Atheist Convention in Dublin, Richard Dawkins wrote a parody letter, “Dear Muslima,” contrasting the liberty of Western women with the oppression of women under Islam. Sexual harassment: not as bad as female genital mutilation. (Just so you know, I would not appreciate a come-on in an elevator either. Alone, enclosed space, stranger, late night. My anxiety level rises just thinking about it.) At the 2013 Women in Secularism conference, Ron Lindsay, CEO of the Center for Inquiry, gave what was widely regarded as a condescending lecture to the women in attendance, accusing them of feminist bullying. (After a huge outcry, he apologized. That was good.)

At the grassroots level, women who speak up against harassment or sexism in the movement have been the target of disgusting attacks online, the sort of vicious obscenity and violent threats notoriously visited upon Anita Sarkeesian and other women in the gaming and tech worlds. If a recipient becomes angry or upset, that just proves she was weak and crazy to begin with. Let me tell you, I’ve seen a tiny sample of the missives directed at Melody Hensley, executive director of the Center for Inquiry–DC, and I can see why she suffers from PTSD. “I receive harassment all day long every day on social media. I also receive threats daily. I have had dozens of videos made about me, harassing me,” she says. “Everything I write online is compiled by my harassers. Even though I know the Internet is public, it’s eerie being watched every moment. I have had people call my home and tell me that they were going to kill me.”

I don’t think it’s healthy for the secular movements to be so focused on a handful of male stars, but here is where some firm leadership might be useful. Instead, Richard Dawkins and Sam Harris talk as if their obnoxious fanboys were all that stood between the values of the Enlightenment and the barbarous darkness of feminist fascism. And they’re happy to make common cause against feminists with whoever’s available. As Dawkins tweeted on September 7, “The ‘Big Sister is Watching You’ Thought Police hate @CHSommers’ Factual Feminism, and you can see why.” That’s the same Christina Hoff Sommers who has a mutual admiration society with noted Enlightenment philosopher Rush Limbaugh. If she’s spoken up against the misogyny and willful ignorance of the Christian right, I’ve missed it.

In July, Dawkins and Ophelia Benson, who blogs at Butterflies and Wheels and is not just smart but wise, signed a joint statement calling for civility and reasonable discourse instead of threats and harassment. Three days later, Dawkins was giving Twitter a lesson in logic: “Date rape is bad. Stranger rape at knifepoint is worse. If you think that’s an endorsement of date rape, go away and learn how to think.” Dawkins’s Twitter feed is a hilarious, ongoing train wreck. Recently he’s tweeted that it’s “immoral” not to abort a fetus with Down syndrome and told women, “If you want to be in a position to testify and jail a man, don’t get drunk.”

Alas, the ability to take such instruction is in good part something Sam Harris thinks women sadly lack. “There’s something about that critical posture that is to some degree intrinsically male and more attractive to guys than to women,” said the bestselling author of The End of Faith. “The atheist variable just has this—it doesn’t obviously have this nurturing, coherence-building extra estrogen vibe that you would want by default if you wanted to attract as many women as men.” It seems to me, judging from recent events, that atheist men are the fragile flowers here—they, not women, are the ones wilting under criticism. Perhaps they can’t stand it that women are withholding that “extra estrogen vibe” that used to make conferences so much fun. (Amanda Marcotte, of the steel-trap mind, has a fine time slapping Harris around at Pandagon. Remind me never to get into a fight with her.)

Why would women join a movement led by sexists and populated by trolls? If this is atheism, I’m becoming a Catholic.