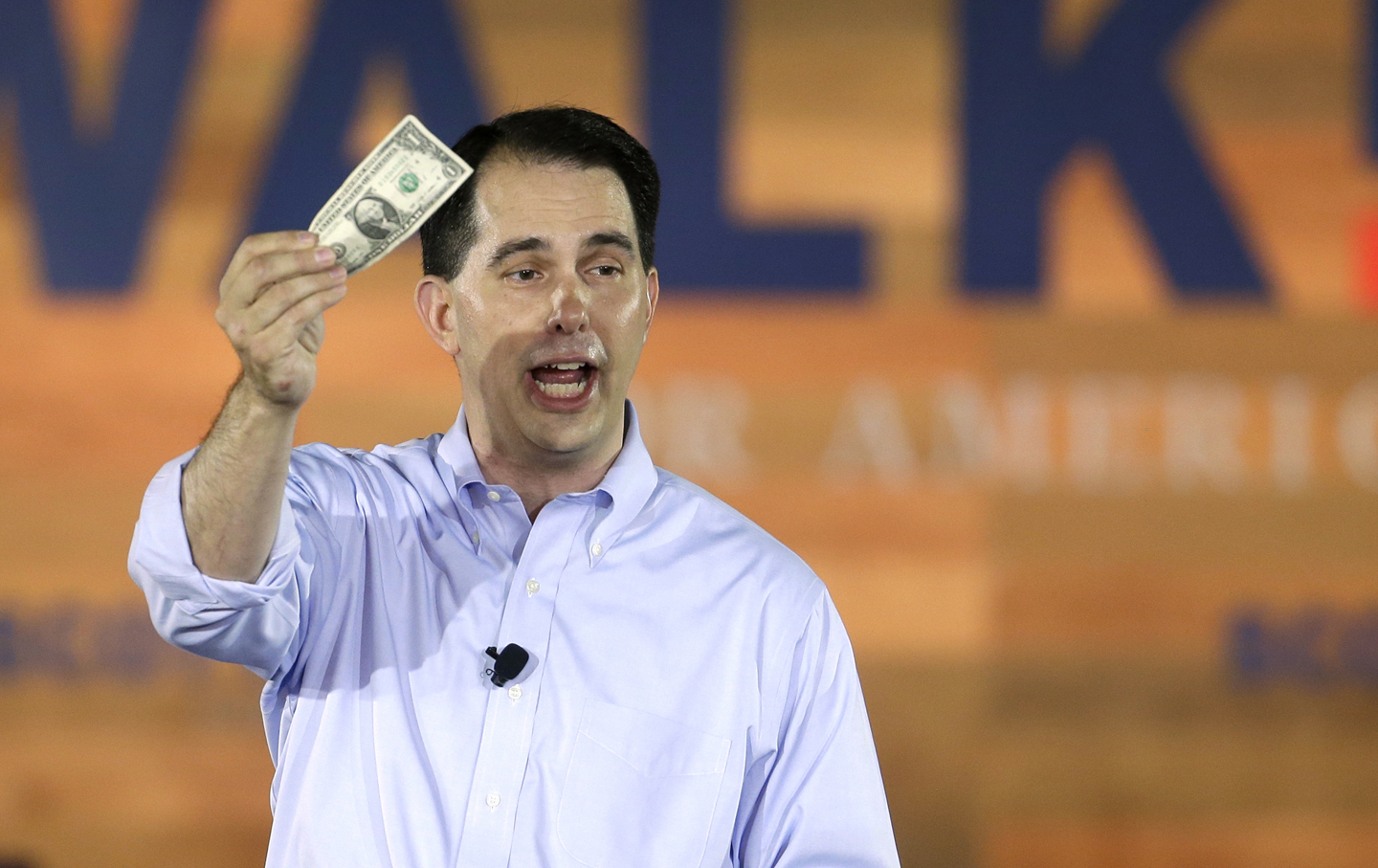 There is modest irony in the fact that Scott Walker hopes to revive his collapsing campaign for the Republican presidential nomination with a scheme to follow the traditional Labor Day pivot point of the electoral schedule with a new push to position the Wisconsin governor as the most ardently anti-union presidential candidate since Robert “Taft-Hartley” Taft mounted his failing bid for the Republican nomination in 1952.

In fairness to Taft, the late Ohio senator was never so unsympathetic to working Americans as Walker. But he had attached his name to a legislative assault on the internationally respected right to organize unions and to collectively bargain—an initiative that invited Southern segregationists to enact so-called “right to work” laws that dramatically undermined the Congress of Industrial Organizations’ “Operation Dixie” and related efforts to develop multiracial economic and social cooperation in the region.

Of course, Walker will not run as well as Taft did in his failed-but-credible attempt to wrestle the 1952 nomination from Dwight Eisenhower—a mainstream Republican who, as president, would renew the party’s historic commitment to respect, and in many instances, aid unions.

Walker’s campaign is in crisis. At the start of August, he was widely considered to be one of the top three contenders for the Republican nomination. His poll standing was such that Fox News positioned him next to emerging front-runner Donald Trump on the stage at the first debate. But Walker’s performance in that debate was dismal. His answers were vapid, and inquiries from the Fox hosts about his ever-changing positions and empty promises embarrassed a candidate who has always relied on Midwest-nice media to let him avoid questions about his competence.

As a result, Walker’s poll numbers quickly plummeted nationally and in the first-primary state of New Hampshire. More recently, he has tanked in the essential first-caucus state of Iowa.

Walker’s circumstance is so dismal that pre–Labor Day polls had him falling to eighth place in the national competition, with just 3 percent support. He is now perilously close to dropping below the line of qualification for first-tier in the upcoming debates. If that happens, Walker could find himself debating Rick Perry and Bobby Jindal rather than Donald Trump and Jeb Bush.

DC-insider Politico’s website convened a panel of analysts to assess how the last few months had gone for the presidential contenders. The consensus was that, among the Republicans, Walker was “the biggest loser of the summer.” Noting the ridiculous title of Walker’s ghost-written campaign book, one political seer concluded that “‘Unintimidated’ has given way to ‘uninformed’ and ‘unprepared.’”

But Walker always has a plan for when he is cornered: attack workers and their unions.

This is the career politician’s default position. He has gone to it as a legislator, a county executive, and a governor.

It has never worked fiscally or economically. Wisconsin’s finances are, as Trump notes, a mess. And the state’s job-creation record is dismal—so bad that Walker was asked about it in the Fox debate as a part of a question regarding his failure to keep campaign promises.

But Walker and his allies still imagine the union-bashing gambit will work with low-information voters in early-caucus and -primary states. So the governor—who famously suggested that cracking down on teachers and nurses and other union members who questioned his policies in Wisconsin had prepared him to confront the most difficult global threats—is ramping up the anti-union rhetoric. And the Super PAC that backs his candidacy, “Unintimidated PAC,” announced on the cusp of Labor Day weekend that it had reserved $16 million in ad time in Iowa, New Hampshire, Nevada, and South Carolina for a blitz that will begin with attacks on the movements of organized workers that were once hailed by Abraham Lincoln, Teddy Roosevelt, Dwight Eisenhower, and Ronald Reagan.

The Unintimidated PAC ad’s script maintains a favorite Walker fantasy: that when he used a so-called “budget repair bill” to attack the collective bargaining rights of public-sector workers he was taking on “the big-government union bosses.”

But the images in the ad provide a reminder that this is a lie.

They show the crowds of teachers and nurses and librarians and police officers and firefighters and snowplow drivers who came to the state capitol in the deep winter of 2011 to assemble and petition for the redress of grievances. Law-enforcement officials hailed the demonstrations as well-organized and peaceful, while expressing concern about the governor’s bombastic and threatening statements—especially in a phone conversation with a caller Walker thought was one of the billionaire Koch brothers.

Walker got a pass from much of the media in 2011 and 2012, when he used tens of millions of dollars from out-of-state billionaires to finance a campaign against the protests and a recall initiative that was placed on the ballot with the petition signatures of close to a million Wisconsinites.

Now, as part of their post–Labor Day pivot, Walker and his allies will mount another free-spending campaign of distortion and division that proposes a bizarro-world “populism” in which an ally of billionaires who attacks the interests of working people is portrayed as a “fighter” who takes on special interests and “never backs down.”

The problem, of course, is that Walker’s agenda, which was always based on economic fabulism, has been revealed as political fantasy as well. He has no story to tell from Wisconsin. His “reforms” did not work. His approval rating has fallen to 39 percent in statewide surveys, and 75 percent of Wisconsin Republicans say tell pollsters they are not backing Walker for their party’s 2016 nomination.

And the Republicans who plan to attend caucuses and vote in primaries do not appear to be any more interested in Walker’s anti-union bombast than they are in Lindsey Graham’s saber-rattling for another war in the Middle East.

The point, of course, is not that Republicans have become pro-labor. Most of the candidates for the party’s nomination are supporters of so-called “right to work” initiatives, as well as privatization schemes and assaults on the interests of teachers and other public employees. Most of them support so-called “free-trade” initiatives that threaten the livelihoods of private-sector workers. (Only former governor Mike Huckabee has met with major union leaders seeking support.)

The point is that Walker cannot produce evidence that his “unintimidated’ assault on workers and their unions has yielded meaningful fiscal or economic progress.

Attacking unions never yields the benefits that the attackers claim are just around the corner. That’s because the first Republican president was right when he told Congress that “Labor is prior to and independent of capital.”

Some truths are self-evident. And Abraham Lincoln stated one of them: “Capital is only the fruit of labor, and could never have existed if labor had not first existed. Labor is the superior of capital, and deserves much the higher consideration.”