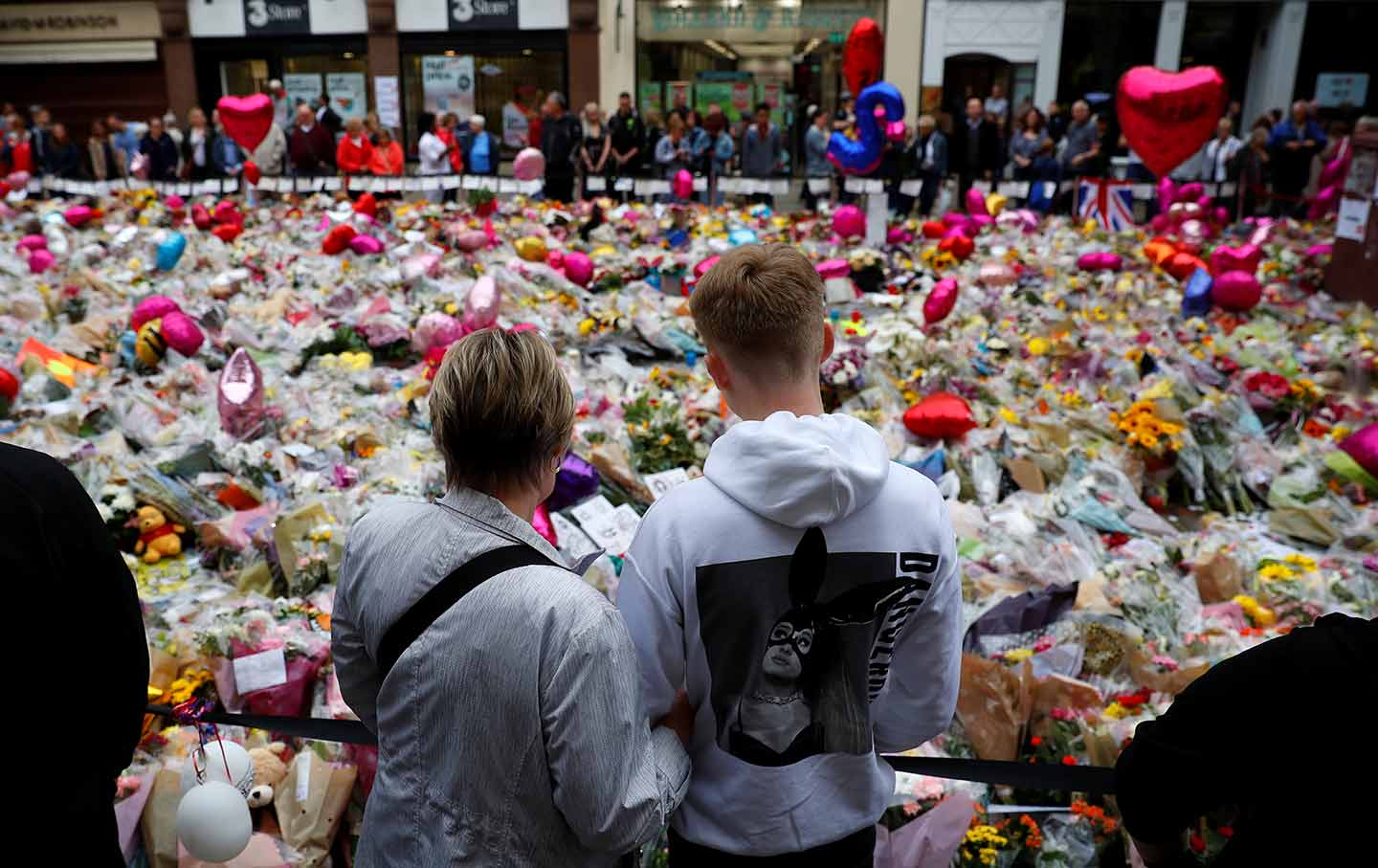 A boy wearing an Ariana Grande hoodie looks at flowers and tributes left for the victims of the attack on Manchester Arena in Britain, May 29, 2017. (Reuters / Phil Noble)

Secretary of Defense Jim “Mad Dog” Mattis said in an interview on Sunday that US strategy toward ISIL has moved from attrition to annihilation. Since 2014, he said, the United States has been making it difficult for them to stay in one place, disrupting them and chasing them out of their strongholds (through airstrikes). Now, he said, the new strategy is to surround them and kill them all, to prevent the foreign fighters from returning home to foment more terrorism. He also urged a battle of humiliation against them in cyberspace, depriving them of any mantle of legitimacy. He was unapologetic about the recent Pentagon finding that a US air raid set off explosives in a Mosul apartment building, killing over 100 civilians, and seemed to pledge more reckless airstrikes.1

ISIL and other radical groups are seeking polarization. Samuel Huntington’s odd screed of the 1990s, “The Clash of Civilizations,” had no truth to it (geopolitics are not made on cultural grounds or the closest US allies would not be Jewish, Wahhabi, and Confucian). The radicals, however, want to engineer such a clash, by hitting soft targets like pop music concerts and getting angry Westerners to mistreat Muslims and drive them into the arms of ISIL. They did the same thing in Iraq, hitting Shiite weddings and then coming back and blowing up the funerals, in hopes of provoking Shiite attacks on Sunni Arabs. They succeeded. Talk, and strategy, like Mattis’s plays into this ploy.2

Despite Mattis’s attempt to give the impression that the Pentagon is in charge, the only reason ISIL can be said to be surrounded in Mosul is because the western perimeter of the city is being patrolled by pro-Iranian Shiite militias. This configuration is hardly a US idea, and in any case it is problematic to have Shiite militias bottling up a Sunni Arab population. Likewise, Mattis intends to surround Raqqa in Syria with Kurdish troops, who are seen as alien by the Raqqa population. Surrounding and annihilating are monochromatic words, which ignore the complicated social context in which they are being deployed. It may be that the United States has no choice but to proceed in these ways, but let us not pretend that there will be no downstream complications from them.3

Mattis’s strategy of annihilation is sort of like fighting forest fires with gasoline hoses.

The strategy of annihilation is sort of like fighting forest fires with gasoline hoses. In his interview, Mattis showed no interest in how ISIL arose in the first place, or how it attracted or gained the tacit cooperation of several million Syrians and Iraqis. He seems to think that a few slick tweets or videos in cyberspace are the problem. The fact is that all the ISIL fighters in Iraq and Syria have siblings and cousins, and simply annihilating them creates a whole slew of new feuds with the United States. Further, the fighters could not have amounted to anything if the citizens of cities such as Falluja and Mosul had felt well-treated by their government and well-represented in the Baghdad parliament. As for eastern Syria, its hardscrabble Sunni Arab farmers have lived under a totalitarian, one-party state for decades, a state oriented to the country’s west and controlled by a Shiite minority. The drought of the last decade killed 70 percent of their livestock and drove tens or hundreds of thousands off their farms.4

In the interview, at least Mattis focused on the level of counterterrorism, which is a matter of disrupting (or just killing) small groups and small operations. As he well knows, groups like ISIL are a problem of counterinsurgency, which requires political solutions. The independent Institute for Economics and Peace, in collaboration with the National Consortium for the Study of Terrorism and Responses to Terrorism (START), a Department of Homeland Security Center led by the University of Maryland, found that 93 percent of all terrorist attacks from 1989 to 2014 took place in countries where the state itself sponsored a great deal of terror, including imprisonment without trial, torture, and extra-judicial killing. Further, 90 percent of these attacks took place in countries pursuing violent conflicts. And half of all ISIL attacks have been carried out by (often unbalanced or criminal) people unconnected to the organization.5

Washington has never come to terms with its own responsibility for destabilizing the Middle East.

George W. Bush’s war on Iraq, in other words, created the exact conditions in that country that were guaranteed to foster terrorism. Washington has never come to terms with its own responsibility for destabilizing the region. Mattis himself helped annihilate Falluja in 2004 (seeking to destroy Abu Musab al-Zarqawi’s Al Qaeda in Mesopotamia, which thereafter morphed into ISIL). That scorched-earth campaign drove the Sunni Arab Iraqis to boycott the 2005 parliamentary elections. That parliament acted as a constituent assembly to craft the Iraqi Constitution, but it had almost no Sunni Arabs, and the three Sunni Arab–majority provinces roundly rejected this organic law in October of 2005. The breakup of Iraq can be traced back to that process.

More recently, President Trump’s conviction that the Arabs need a strong hand at the till is exactly the policy that leads to terrorism. Trump’s speech in Saudi Arabia last week promoting a Sunni alliance against Shiites, moreover, is another push for regional violent conflict that will spill over onto the West.2

Despite a lot of big talk from Washington over the past decade and a half, the so-called Global War on Terror has been a bigger bust as a US military campaign than any since Vietnam. A third of Afghanistan is in the hands of the Taliban or ISIL, and Iraq is a shambles, having lost 40 percent of its territory in 2014 and having only managed to recover most of it by empowering radical Shiite militias and reducing Sunni cities to rubble. Terrorist attacks have multiplied in both countries, and have spilled over onto Europe.3

Meanwhile, pop singer Ariana Grande, 23, whose concert was attacked by a British ISIL operative in Manchester, announced that she would return to Manchester for a benefit concert for the victims. The second-most-followed person on Instagram stressed that her concert was about inclusiveness and that would not change. “The way you have handled all of this has been more inspiring and made me more proud than you’ll ever know. The compassion, kindness, love, strength and oneness that you’ve shown one another this past week is the exact opposite of the heinous intentions it must take to pull off something as evil as what happened Monday… We will not quit or operate in fear. We won’t let this divide us. We won’t let hate win.”6

Her sentiments, the essence of counterinsurgency when it comes to ISIL’s polarizing plot, were shared by Manchester Muslims, who marched in solidarity with the victims.8

I’m hoping that the Pentagon follows Grande’s Twitter feed. Because she nailed it.4