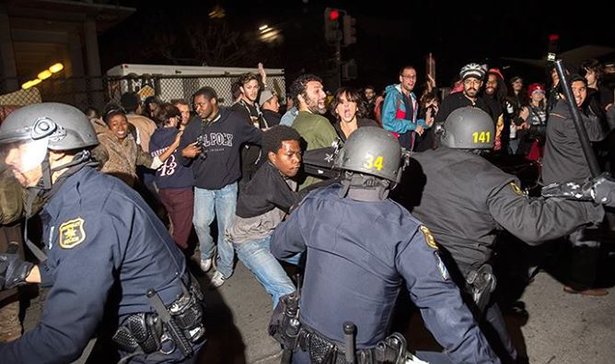 This post is part of The Nation’s biweekly student movement dispatch. As part of the StudentNation blog, each dispatch hosts first-person updates on student and youth organizing. For recent dispatches, check out November 10 and November 24. For this edition, ten people submitted a video and a brief update on their organizing in the struggle for black life. Contact studentmovement@thenation.com with tips. Edited by James Cersonsky (@cersonsky).

In the past two weeks, members of the Missouri GSA Network have joined with Millennial Activists United to shut down highways and major intersections, convene community forums and march with Metro Trans Umbrella, chanting, “Black lives matter!” and “Stonewall was a riot!” As young trans women and gender nonconforming people of color, we are in one struggle against murder at the hands of police, the criminalization and pushout of students of color in schools and the gender policing we do within ourselves. We ask: #AreYouListening?

2. “We ain’t going to stop until our people are free”

In New York, FIERCE has been in the streets with our drums, our voices and our bodies. We are marching to ensure that, when we chant, “Black lives matter!” all black lives are uplifted and remembered. We are tired of black bodies, queer bodies, youth bodies and trans bodies being seen as disposable. We will continue to use what we have in the struggle for justice for all black lives lost due to police violence.

On December 4, at 12:15 PM, 100 black students at the University of Texas organized a die-in in response to the non-indictment of Eric Garner’s murderer. We lay in the intersection of 21st and Speedway, one of the busiest on campus, while non-black allies stood around us as a protective shield, holding signs reading, “Black Lives Matter.” With the help of the the People’s Task Force, African and African Diaspora Studies Department professors and many members of the Austin community, we shut down traffic and stood in solidarity.

This demonstration, a sit-in led by Howard University students at Union Station in Washington, DC, saw participation from students from schools acorss the district and beyond. As black people, it is time for us to claim our economic potential, demand legislation that protects black lives and educate our communities. Though this nation chooses to ignore us, do know: we are here!

5. “We will be teaching… building… healing”

On November 25, members of the Black Youth Project 100 Chicago Chapter organized a twenty-eight-hour sit-in in front of Chicago Mayor Rahm Emanuel’s office at City Hall to bring attention to the fact that a Black person is killed by a police officer, security officer or self-appointed vigilante every twenty-eight hours. There were also die-ins at the twenty-eight-minute mark to underscore the point. During the sit-in, there were political education teach-ins about BYP100’s policy agenda, the Agenda To Keep Us Safe, in addition to healing circles and community building.

6. “It is no longer the time to be silent at the water cooler”

People in Ohio are taking action in solidarity with those across the country—and in response to the recent string of police killings that have left John Crawford, Tanesha Anderson and Tamir Rice dead. Led by Black youth, the movement in Ohio is bringing together people of all races, genders and ages. We are having conversations about how to move policy and structural change at the local and statewide levels and shake up the current political and economic makeup of our cities.

7. “In our communities, we know these stories”

On December 3, we converged on Chicago’s Dirksen Federal Building as part of a forty-three-city day of action coordinated by #USTired2 and #YaMeCanse. From Chicago to Ferguson, we watch and suffer as the police violate basic human rights and the cries for justice for black lives goes unheard. In Ayotzinapa, we watch as students are disappeared by the police and protestors are met with violent repression—at the hands of another state that has decided to use force against its own people.

8. “Occupation is a crime, from Ferguson to Palestine”

Students for Justice in Palestine at the College of Staten Island stands against racism, state terror and oppression of all forms. Eric Garner was killed by a system of racist police brutality that has murdered black people in our communities for years. If we do not stand against this system, we are complicit in it. After hitting the streets following the non-indictments in the Eric Garner and Mike Brown cases, we will continue marching—and organizing.

—Students for Justice in Palestine at the College of Staten Island

Student activists in Memphis took part in Black Friday protests to support Walmart strikers and protest the murders of black youth at the hands of police. We stormed a Walmart store in Cordova, Tennessee, chanting “Black lives matter!” and “People over profit!” As we were forced out by police, and one person was detained, we continued protesting outside the store and performed a die-in at a nearby mall.

After the decision in Ferguson, Million Hoodies Movement for Justice partnered with Rockaway Youth Task Force, Alpha Phi Alpha Fraternity and students from Columbia University to bring people together to boycott Black Friday. On the busiest shopping day of the year, we made our voices heard at Macy’s, Herald Square and Times Square. Since then, we have helped organize This Stops Today after the non-indictment announcement in Eric Garner’s case and are organizing a national campaign to demilitarize campus and local police departments.