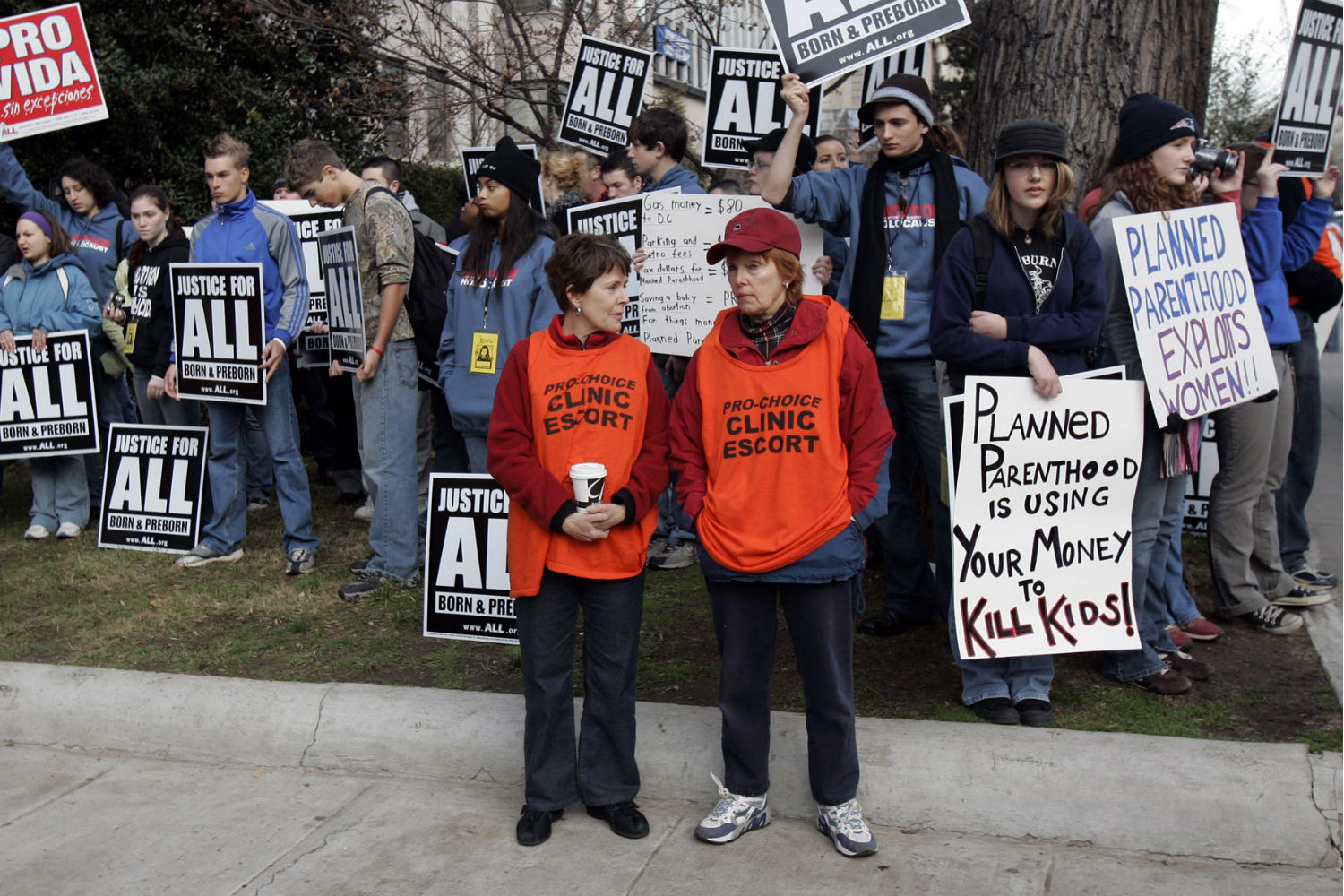 Planned Parenthood clinic escorts stand in front of a group of anti-abortion protestors outside a clinic in Washington. (AP Photo/Susan Walsh)

Reproductive rights advocates warned of intimidation and violence in the wake of the Supreme Court’s unanimous decision to eliminate fixed buffer zones around abortion facilities. It’s a reasonable response given a history of physician assassinations, bombing of medical facilities and harassment at clinic entrances. The decision in McCullen v. Coakley, handed down on June 26, pays lip service to the idea that patients should not be subject to harassment, encouraging localities to implement narrowly tailored laws to prevent it. But the decision is not only a threat to women’s safety when seeking medical care. It is also an insidious attack on their personhood.

Distinguishing between rowdy protesters and supposedly reasonable “petitioners,” Chief Justice John Roberts imagines a more civil and deliberate process, writing that “petitioners wish to converse with their fellow citizens about an important subject on the public streets and sidewalks—sites that have hosted discussions about the issues of the day throughout history.” He laments that “petitioners at all three clinics claim that the buffer zones have considerably hampered their counseling efforts.”

I experienced an early version of these “counseling efforts” when I volunteered as an escort for women seeking abortions. We would hold their hands and shield their faces as they walked the gantlet of ghoulish dead-infant photos, bloody crosses and obscene taunts of “baby murderer.” The experience was terrifying for patients and volunteers.

According to the Court’s decision, buffer zones don’t thwart this kind of harassment—they cause it. Roberts implies that women are subjected to these threatening displays because anti-choice advocates can’t get close enough to patients to whisper gently. “Petitioners are not protestors,” he writes. “They seek not merely to express their opposition to abortion, but to inform women of various alternatives and to provide help in pursuing them. Petitioners believe that they can accomplish this objective only through personal, caring, consensual conversations…. If all that the women can see and hear are vociferous opponents of abortion, then the buffer zones have effectively stifled petitioners’ message.”

Roberts explains further that buffer zones make it hard to tell which people on a public street deserve to be approached by strangers wishing to offer their unsolicited advice. The zones have “made it substantially more difficult for petitioners to distribute literature to arriving patients,” Roberts notes, adding that “because petitioners…cannot readily identify patients before they enter the zone, they often cannot approach them in time to place literature near their hands—the most effective means of getting the patients to accept it.” In short, if the state attempts to protect pregnant women and their right to privacy by shielding them from intrusive curbside observers, it will infringe on the First Amendment rights of their would-be counselors.

This decision has, in the end, unleashed something far more insidious than the danger of a few extremists having greater access to kill or maim. The Supreme Court has decided—unanimously—that the First Amendment protects the right of every single American to approach and intimately “counsel” any pregnant woman. There is no requirement that such counselors have medical licenses, counseling degrees or any other professional credentials. There is no requirement that the literature they distribute be accurate.

The Court’s decision erodes the ability of pregnant women to enjoy the rights of autonomy and privacy that are necessary for full citizenship. In his 1928 dissent in Olmstead v. the United States, Supreme Court Justice Louis Brandeis wrote: “The makers of our Constitution undertook to secure conditions favorable to the pursuit of happiness…. They sought to protect Americans in their beliefs, their thoughts, their emotions and their sensations. They conferred, as against the Government, the right to be let alone—the most comprehensive of rights and the right most valued by civilized men.”

This comprehensive right helps establish who is inside or outside the circle of full citizenship. People who are presumed not to have autonomy include slaves, prisoners and children. Before Roe v. Wade, pregnant women were similarly limited. Some states forced women to obtain counseling and permission from strangers before allowing them to terminate their pregnancies. The result was an incredible invasion of privacy. For example, in the late 1960s, women in Washington State could receive “therapeutic” abortions if they managed to convince a panel of doctors that the procedure was medically necessary. Psychologist Samuel Goldenberg listened as women pleaded with strangers for the right to end unwanted pregnancies by explaining the emotionally difficult, financially contingent and sometimes domestically violent circumstances of their lives. Goldenberg, a licensed counselor, was deeply troubled as he watched these panels force women to carry pregnancies against their will. His experiences put him at the forefront of the Referendum 20 movement, which legalized first-trimester abortions in Washington a full three years before Roe established a right to privacy for pregnant women.

These days, conservative lawmakers have set about eliminating legitimate sources of information and care. Under the guise of protecting women’s health, states are passing restrictive TRAP laws (short for “targeted regulation of abortion providers”) aimed at closing facilities that offer abortions, by forcing them to comply with arbitrary rules about standard hallway widths and physician admitting privileges.

By one reading, the Roberts Court’s buffer-zone ruling is narrowly tailored, allowing states to impose other restrictions on anti-choice protesters. By another reading, however, the Court’s decision spells out the terms for gutting pregnant women’s access not only to abortion, but to their full rights as citizens.