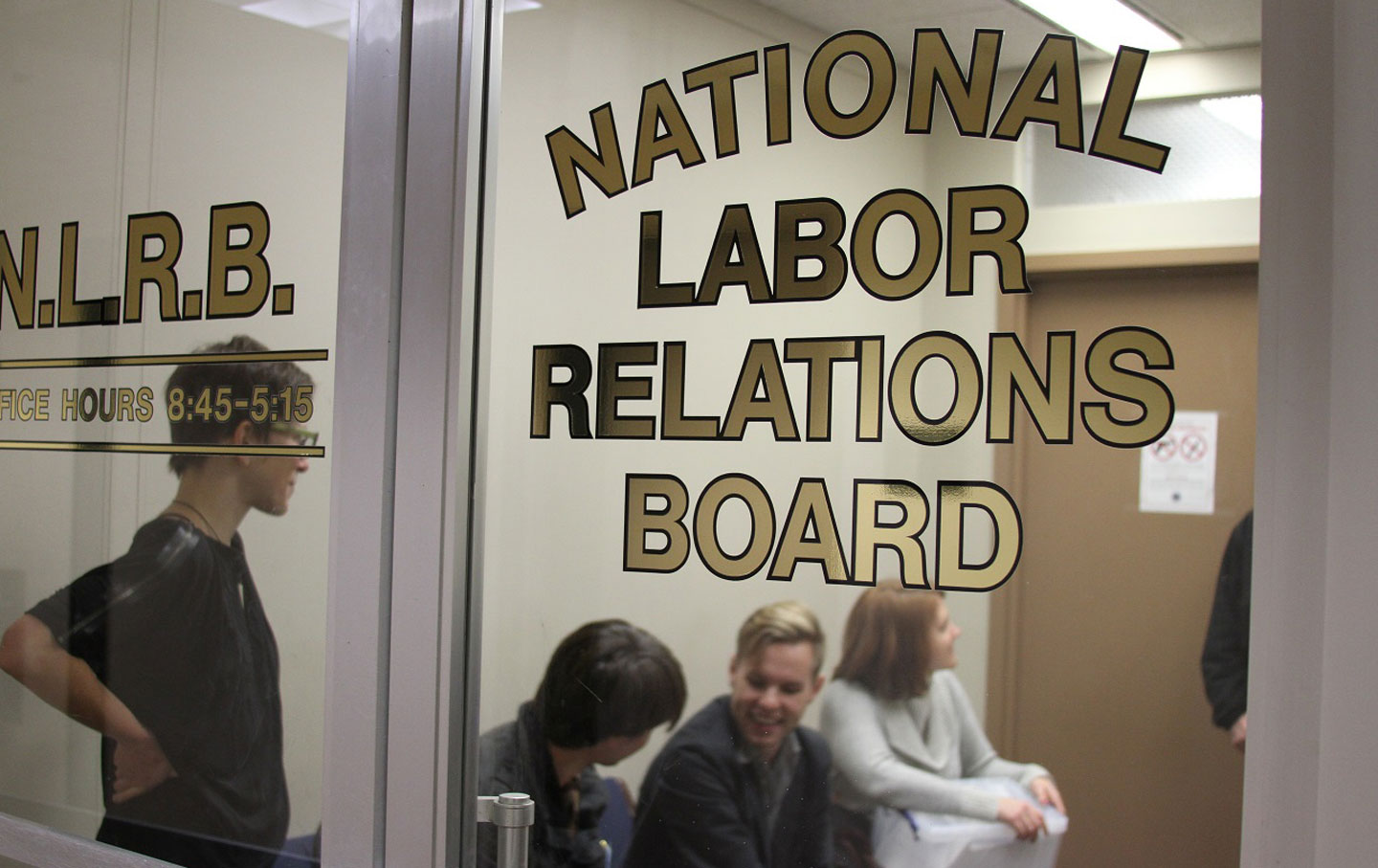 The New School was founded as a bastion of progressive thought a century ago, but it’s taking a decidedly old school approach to its students’ labor rights.

Late last month, graduate students seeking to organize a union at the famously liberal institution were thwarted by a decade-old precedent that bars the right to unionize for graduate student instructors and researchers. The regional director for the National Labor Relations Board (NLRB) deemed graduate students with Student Employees at the New School (SENS-UAW) as non-employees, based on a 2004 decision involving graduate-student workers at Brown University, in which the Board ruled that the relationship between the students and institution wasn’t that of a worker and employer, but rather, that “the graduate student assistants have a predominantly academic, rather than economic relationship with their school.” So although they taught, researched and performed administrative tasks in exchange for the school’s financial support for their studies—even when working on a regular schedule with a designated hourly wage, under a supervisor—that labor wasn’t work, but rather, simply a privilege of their academic experience. This realm, supposedly, is one of scholarly discourse, not labor and capital.

Incidentally, this logic is perfectly convenient for a wealthy private institution that absorbs millions of dollars annually in grants and hyperinflated tuitions. Inconvenient for the doctoral student struggling to juggle teaching and research on fast-food wages.

Though the higher-education sector is mostly “not for profit,” the American university system operates as an absurdly lucrative corporate hierarchy, with the teaching workforce at the bottom. But the low teaching salaries are subsidized by a patina of meritocracy, credentials and brand prestige. Still, in a city like New York, scholarly credentials don’t offset poverty payscales, with minimal control over schedules and working conditions.

Though more than thirty graduate student unions have formed around the country, official unionization on private campuses remains rare, typically dependent on voluntary recognition by administrators. Graduate assistants at New York University pioneered private-college unionization by establishing the Graduate Student Organizing Committee. But organizers at the New School, Yale, Columbia and other institutions are seeking to formally overturn the Brown precedent in order to establish statutory collective bargaining rights, which can be certified through the standard election procedure under the National Labor Relations Act—so that unionization is a matter of workplace democracy, not administrative discretion.

In the New School’s union campaign, students and organizers argue that their labor situation differs in key ways from Brown. For example, while Brown students’ stipends did not vary based on whether they “performed research and teaching tasks… at The New School there is no evidence of such equivalent payments made to non-working students, despite some very limited scholarship grants.” So students depended more heavily on their labor to earn financial aid or funding.

Moreover, one subset of the workforce, course assistants, “do not regularly perform any teaching or research tasks” and primarily undertake “administrative” duties. Since there’s not much academic merit vested in their jobs, why don’t their duties count as real work? That their institution’s most prized asset is so poorly compensated shows academic logic defies common sense.

Following the ruling, New School organizer and graduate student Eli Nadeau, said via email that SENS-UAW will continue to push their claim at the federal NLRB in Washington to overturn Brown:

As we gear up for fall, preparing curricula and checking enrollments, we student workers know the value of our labor. In anticipation of the year to come, we issue this challenge to the administration.

Consider the priorities of the New School and recognize our union. Recognize us—as students whom the institution exists to serve and as workers whose labor serves the functioning of the university.

According to Alyssa Greene, Columbia University doctoral student and organizer with the school’s union campaign, Graduate Workers of Columbia-UAW, the group is optimistic that New School activists will prevail at the federal NLRB, and that “The Brown ruling does not reflect the reality of graduate work: like our colleagues at NYU and more than 60 public universities across the US, we are both students and workers.”

High stress and economic insecurity pervade the Ivory Tower as they do other service industries. Universities regularly exploit students’ instructional labor in lieu of professional faculty coursework for undergraduates; a quarter of part-time professors depend on public benefits to cover their basic needs, according to University of California-Berkeley researchers. Without union protection for labor standards or academic freedom, graduate workers hang on the bottom rung of the academic ladder.

Presidential candidates have been airing various plans to make college more “affordable” and ease the country’s student debt burden. But ideally, the true value of an education isn’t measured just as a consumer product on the labor market, but as a reflection of how much society values the people producing it.

Without collective bargaining rights, higher education can’t measure up to its full potential.