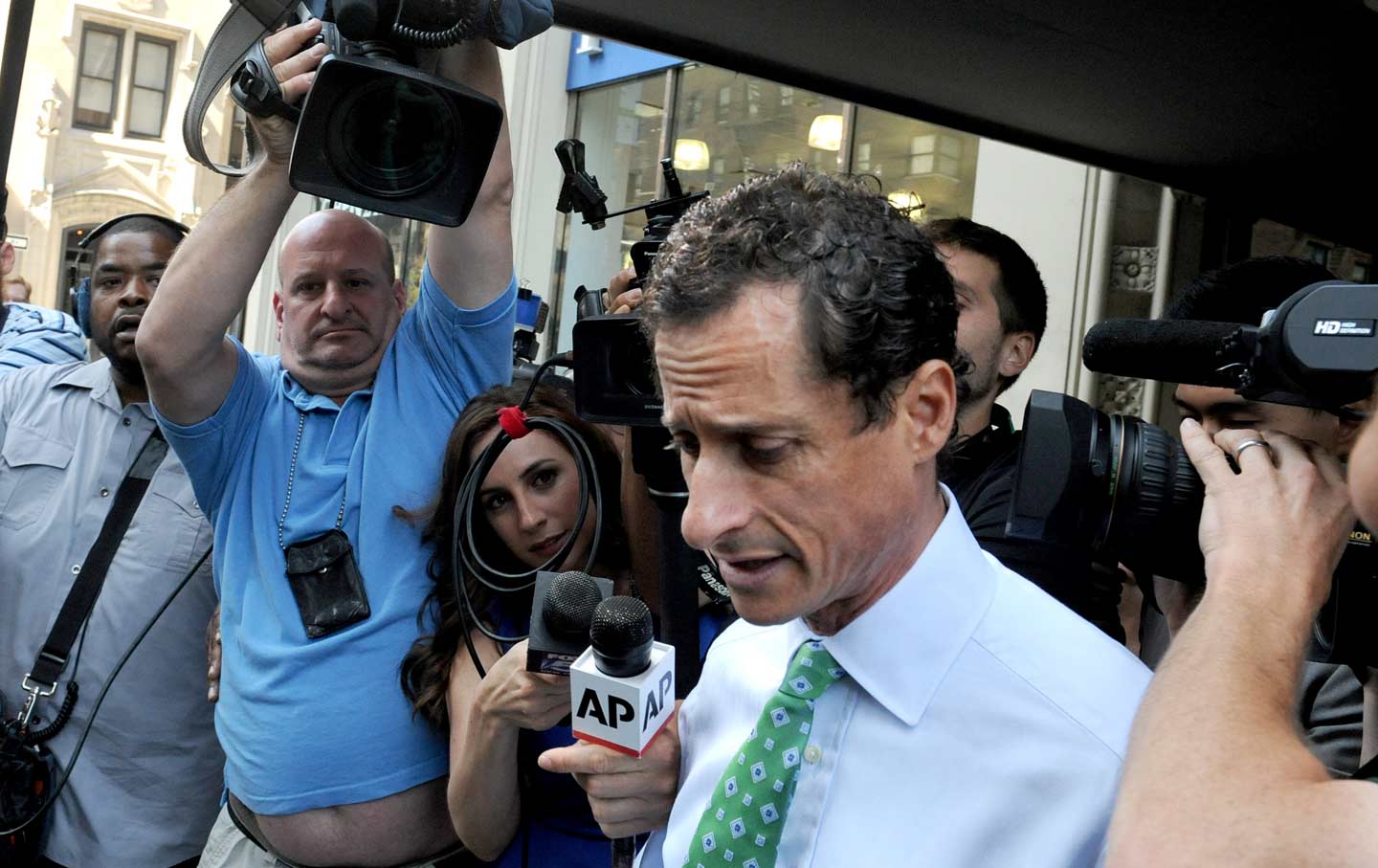 News crews try to get comments from Anthony Weiner as he leaves his Park Avenue apartment. (Louis Lanzano / AP Photo)

On June 16, 2011, Nancy Pelosi, the House minority leader, began her regularly scheduled Thursday-morning press conference before a packed house. Joined by Sandy Levin, the ranking member on the Ways and Means Committee, and Congressman Mark Critz, Pelosi announced that the trio were there “to talk about jobs, about protecting Medicare and protecting the middle class. If you’re here to ask a question about Congressman Weiner,” she warned the assembled mob, “I won’t be answering any.” Instead, Levin and Critz focused their remarks on a bill attempting to address Chinese currency manipulation, which they estimated had cost US workers from 500,000 to 1.5 million jobs.

The reporters, however, couldn’t help themselves, any more than Anthony Weiner could stop himself from sending “dick pics” to women with whom he’d texted on the Internet. “I know you say you’re not going to answer questions about Anthony Weiner,” the first remarked. “But, at this point, do you plan to withdraw your call for an ethics investigation or keep that call in place?” Pelosi repeated that she would not be commenting on the matter. Then came the second question: “Could you talk generally, though, about what it takes for you to call for one of your own members to resign?”

‘Weiner’: If They Cheer, or if They Jeer

Following a brief discussion about the Libyan civil war, the reporters started in on Weiner again. When it became clear that Pelosi wouldn’t play along, the room cleared out and the press conference ended. Chinese currency manipulation and American jobs would just have to wait for Donald Trump to show up four years later.

The putative disappearance of Anthony Weiner’s wiener would prove considerably briefer. When the former congressman sought rehabilitation by entering the New York City mayor’s race in 2013, he initially jumped to the head of the pack. That was when his former staffer, Josh Kriegman, and documentarian Elyse Steinberg approached him with the idea of making a film about his comeback. Like his mentor, Senator Chuck Schumer, Weiner is a danger to anyone who stands between him and a television camera. He agreed immediately.

The campaign soon became a sad circus when it was revealed that Weiner had continued to send penis pictures to women he’d met online even after he was forced to resign his seat in Congress. He became a laughingstock, and his wife, then-36-year-old Huma Abedin—who has devoted herself professionally to Hillary Clinton since 1996 and is now vice chair of her presidential campaign—became the subject of an endless loop of amateur psychoanalysis on cable news regarding her decision to “stand by her man.”

The recent release of the simultaneously fascinating and excruciating documentary Weiner has given pundits yet another opportunity to ponder the questions raised by the behavior of these political animals. The movie is filled with creepy moments in which Weiner demonstrates a degree of self-delusion that wouldn’t be believable in fiction, while Abedin demonstrates similarly superhuman self-control, maintaining a fixed stare and perfect composure in the face of repeated man-made disaster. As Lawrence O’Donnell tells Weiner during a typically out-of-control MSNBC segment, “I think there is something wrong with you”—though his use of the singular significantly understates the case. Abedin mostly speaks with her eyes while she is on camera, but when she spies her husband viewing his embarrassing performance on his computer later that evening, she can’t help but demand: “Why are you laughing?” A better question, given what Weiner (and possibly Abedin) must know, is: “What were they thinking?” A corollary, which Kriegman asks Weiner near the end of the movie, is: “Why have you let me film this?”

The documentary has induced an unwelcome feeling of double déjà vu, both for the initial Weiner photo scandal and the earlier Monica Lewinsky mess. One hears echoes of both when New York Post writer Barbara Hoffman, in an article titled “Huma Abedin Is Humiliated Again in New ‘Weiner’ Doc,” insists that Abedin dump her husband. Vanity Fair’s Mike Hogan updates the meme when he writes of Abedin: “It is fair to ask whether she could have done more to avert this catastrophe—and to ask whether Huma will do enough to avert future ones.” According to The Hollywood Reporter, the filmmakers have also been accused by “multiple sources” of working on an earlier version that included evidence of Clintonian pressure on Abedin to cut Weiner loose. Kriegman and Steinberg deny this, and the former notes that the accusations were being leveled “by people who haven’t even seen the movie.” Alas, New York Times critic Stephen Holden is among the precious few to note what ought to be the most important takeaway from this train wreck: the ability of the “bloodthirsty mob of competing reporters and paparazzi” to completely overwhelm all aspects of the 2013 mayoral race so long as Weiner remained in it. As Holden observes, whenever Weiner “tries to steer the conversation to the issues, journalists won’t let him.”

Given the weirdness and salaciousness of this story, Weiner’s failure to communicate his ideas is predictable. But the fact is, as with the Lewinsky scandal—to say nothing of lesser dramas like those involving Eliot Spitzer, John Edwards, Mark Sanford, etc.—sex turns most of our major media outlets into a hydra-headed monster with the brain of a 12-year-old. The combination of illicit sex and political ambition allows allegedly high-minded pundits to sound superior and moralistic without having to acknowledge their own flaws and sexual peccadilloes. At the same time, these stories crowd out the kind of information that people actually need to understand what is going on in their world.

And who knows? Despite his strange hobby, perhaps Weiner had some good ideas for the city he clearly loves. If so, we will probably never get to hear them. Repeatedly during the film, we watch Weiner talking about his endless supply of ideas to save New York City for the middle class, but we never hear him articulate a single one. We do see “civilians” scold the media pack for failing to let Weiner speak to the issues, but the guys with the cameras and microphones couldn’t care less. And when we do see Weiner the politician at work, those scenes are not exactly filled with policy proposals. Most show him wildly waving flags at parades of one kind or another, showing support for everything from Israel to LGBT rights to the hodgepodge of ethnic groups that populate New York’s boroughs.

The most grating part of the film involves Sydney Leathers, the woman who anonymously leaked the last set of “sexts.” BuzzFeed managed to nail down her identity in an article that was apparently assigned to 10 reporters. Just imagine what journalists could accomplish if media institutions devoted such energies to holding genuine power accountable.