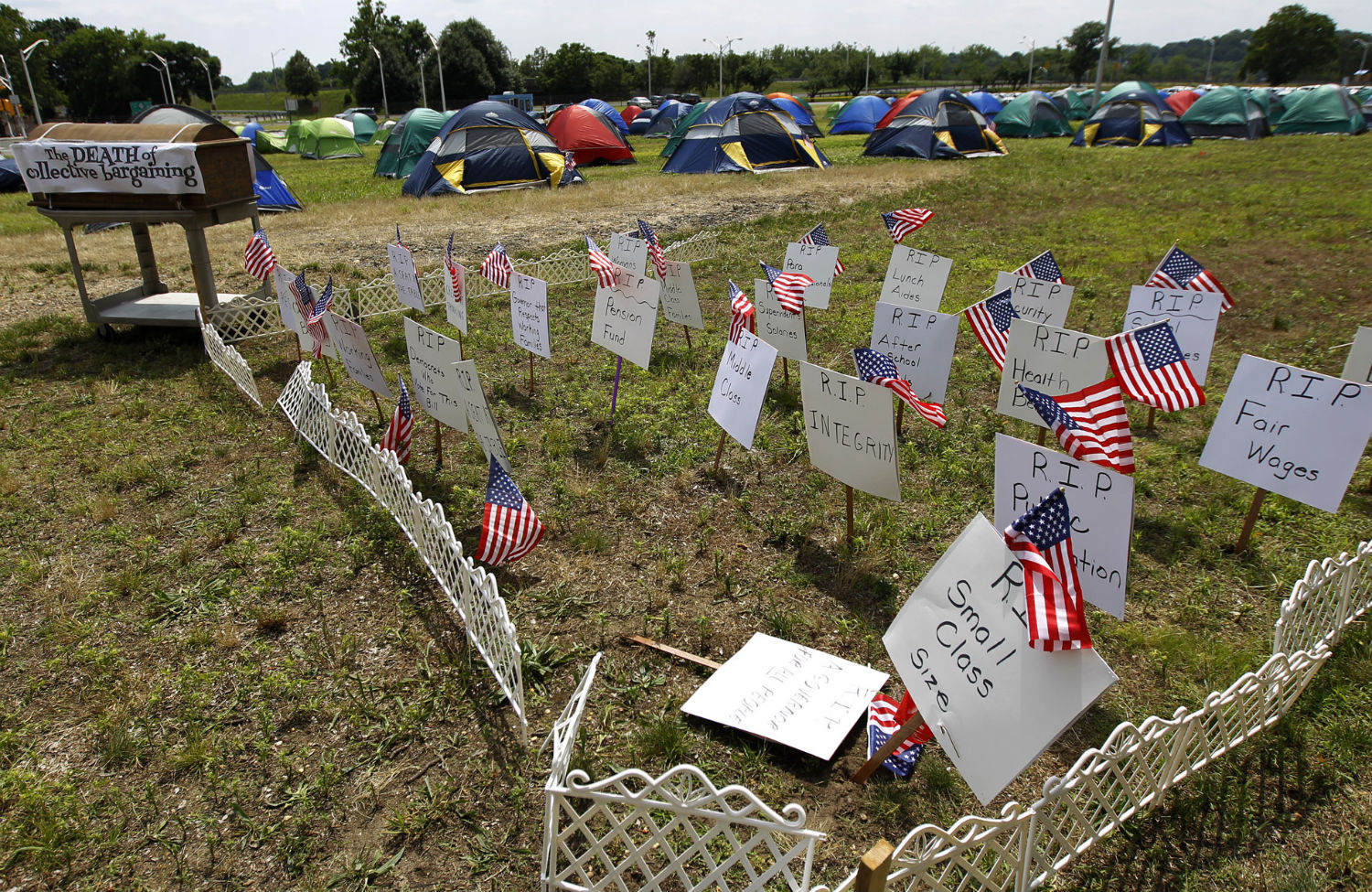 For Governor Christie, who’s trying to restart his presidential campaign despite an interlocking series of scandals that have plagued him, the ongoing pension crisis in New Jersey might be what keeps him from that goal.

For Christie, of course, it wasn’t meant to be that way. As Christie Watch has noted, ever since his 2012 speech to the Republican National Convention, the governor has touted himself as the Republican best able to deliver Democrats in support of tough pension changes. But now he’s confronted with powerful and growing opposition to yet another round of pension and healthcare benefit cuts, undermining his plan to present himself as a leader who’s garnered bipartisan support for his wrecking-ball approach to pension reform.

His loss of support because of his assault on pensions is reflected in a new survey released on June 4 by Fairleigh Dickinson’s Public Mind, which reveals that, by wide margins, New Jerseyans don’t agree that cutting state contributions to pension funds and reducing payouts to retirees is the right way to deal with the state’s pension problems. According to the poll, “almost two thirds (61 percent) believe the state’s pension system is, at the very least, experiencing serious problems, with a quarter (23 percent) who believe it’s already in a state of crisis,” but “only 27 percent believe reduced payouts are the answer, as compared with almost two-thirds (63 percent) who believe the state needs to honor the promises it made to its workers.” The poll also found that large majorities of New Jersey Democrats, especially among union members, minorities and women, are likely to oppose Christie’s planned cuts:

Those in public employee union households are the most supportive of honoring promises (85 percent), but a majority of voters with no connection to a public employee union member also want the government to make good on its promises rather than reduce payouts (56 percent). Democrats (73 percent), women (68 percent) and non-whites (73 percent) are also more likely than voters overall to favor fidelity over reforms that reduce benefits.

Back in 2011, with the support of Stephen Sweeney, a conservative Democrat and Christie ally who is president of the state Senate, Christie rammed through legislation that slashed future cost-of-living increases by tens of billions of dollars, forced retirees to pay billions more over time toward their pensions, cut benefits and raised the retirement age to 65. In exchange for the benefit cuts and increased contributions by employees, Christie agreed to legislation requiring a seven-year ramp up in state payments to the pension system to make up for many years of underfunding. The increased state contributions were supposed to put the pension system on a sound footing.

But instead of making the pension funding he agreed to, Christie decided to ignore the law. In a unilateral action May 20, he cut this year’s payment from $1.58 billion to $696 million and next year’s installment from $2.25 billion to $681 million in order to fill the budget hole created when tax revenues in April were way short of expectations.

Christie has said he will soon announce a new plan to more dramatically restructure the state employee pension system, and there are hints he may be aiming for changes that only one state, Rhode Island, has dared try. Rhode Island’s plan revamps the retirement program for current workers, not just those who will be hired in the future. The handful of states that have made dramatic changes to pension plans have done so only for future hires. State Treasurer Sidamon-Eristoff recently told the state legislature that shifting current state workers into a combination pension plan, one that both pays a small set pension, as well as sets up a 401(k) plan for employees, is an option under consideration. A 401(k) shifts much more of pension costs onto the employee and destroys the concept of a secure, set retirement payout. Only Rhode Island has done so for those currently on the payroll who expected a state pension. Rhode Island’s plan is being challenged in court.

Interestingly, according to the Fairleigh Dickinson Public Mind poll, more than three-quarters of New Jerseyans are following the news about pension cuts in other states, where Republicans are taking on teachers and state employees in a battle that is likely to be a major issue in the presidential campaign of 2016. Reports the Public Mind poll:

State employee unions have said they will sue to stop Christie’s unilateral pension payment change, and Democratic lawmakers are calling for a tax on the wealthy, something Christie has already vetoed several times. On June 4, the New Jersey Education Association sent 23,000 letters from members to its pension fund board, urging them to join the union in suing to stop Christie’s unilateral deferral of the pension payments.

NJEA has already announced that it will sue the Governor, in conjunction with other unions. But the law also allows the Boards of Trustees of the various pension funds to sue in order to protect the integrity of the funds. Our members demand that the Trustees take action to protect their contractual right to a well-funded, secure pension system. We will watch carefully to see if the trustees will represent the members of the funds, or just defer to Gov. Christie’s illegal plan.

David Sirota, who’s been reporting extensively on conflict-of-interest issues involving Christie, his campaign contributors and the big financial concerns that have an interest in New Jersey’s pension business, reports that “political donors associated with 43 financial firms managing New Jersey pension money have spent a total of $11.6 million on contributions to New Jersey politicians and to major political organizations operating in New Jersey elections.” He adds:

Many of those donations have gone directly to Gov. Christie’s election campaign and to the New Jersey Republican State Committee. Additionally, many of the contributions came either just before or just after the Christie administration awarded the firms multi-million-dollar pension management contracts. Indeed, Christie officials have given many of the firms that have made the donations additional pension investments, often worth hundreds of millions of dollars.

Gov. Chris Christie’s plan to cut funding for public-worker pensions means New Jersey’s debt could be downgraded again sometime in the next three months, a Wall Street credit-rating agency said today in a note to investors. Standard & Poor’s warned that New Jersey’s credit rating could take another hit in the next 60 to 90 days depending on the budget plan that Christie and the Democratic-controlled Legislature end up passing for the new fiscal year, which begins July 1.

And New Jersey workers are getting angrier. Krista Jenkins, the director of Public Mind and a professor of political science at FDU, says:

The governor believes reduced contributions to the system are preferable to higher taxes. If you follow the logic, eventually the demand will exceed the input. If and when that day comes, the public would not support cutting benefits to state workers. … Although some feel more strongly than others, no matter where you look you see a lack of support for reneging on promises made to workers.