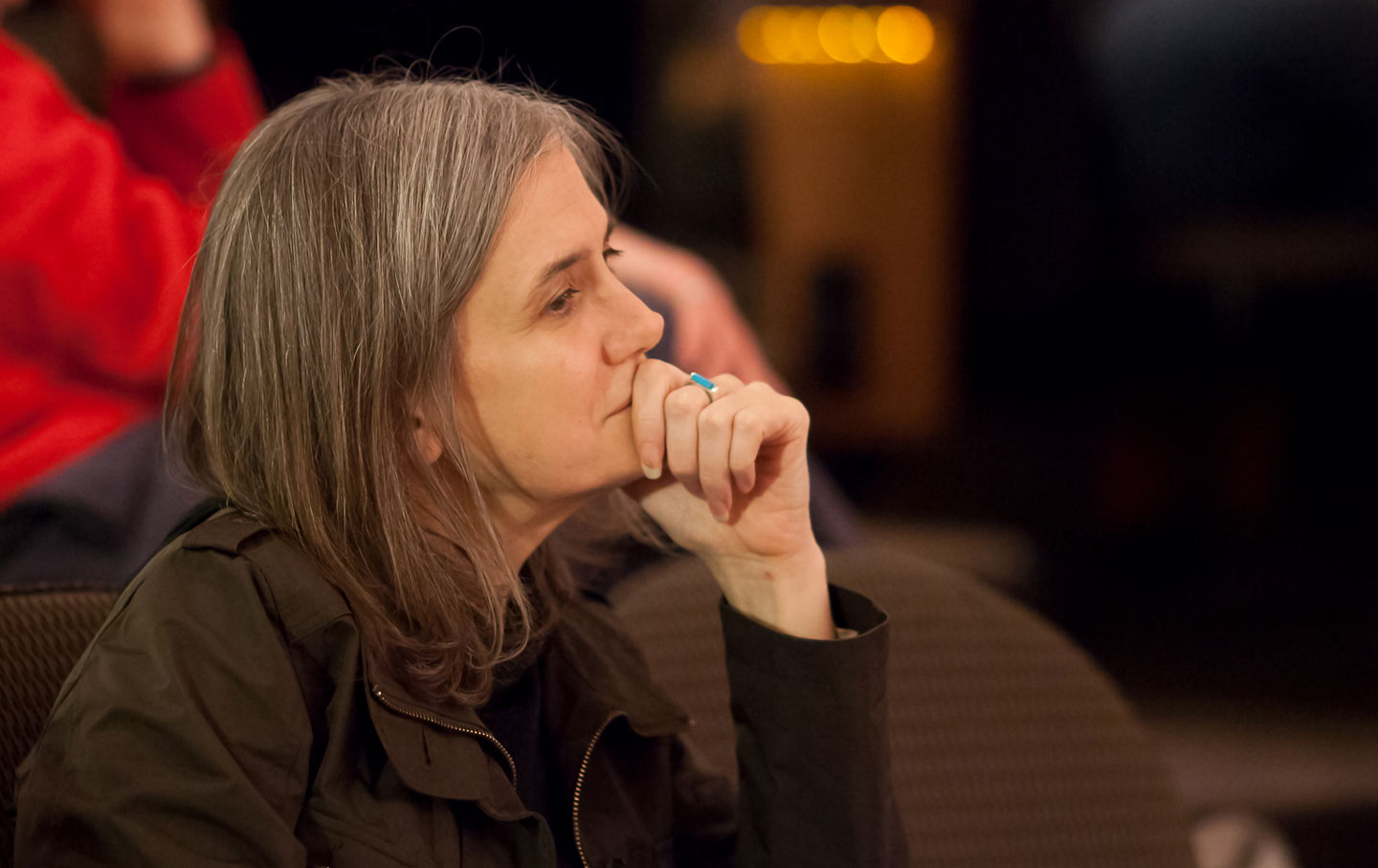 Update: Case dismissed! On Monday, October 17, District Judge John Grinsteiner rejected the “riot” charge that had been leveled against Amy Goodman for her coverage of a September 3 Dakota Access Pipeline protest. Standing before the Morton County courthouse, surrounded by supporters, Goodman said: “It is a great honor to be here today. The judge’s decision to reject the State’s Attorney Ladd Erickson’s attempt to prosecute a journalist—in this case, me—is a great vindication of the First Amendment.” And she added: “[W]e encourage all of the media to come here. We certainly will continue to cover this struggle.”

This Monday morning, shortly after the sun rises over the small city of Mandan, North Dakota, the award-winning journalist, and host of Democracy Now!, Amy Goodman will walk into the Morton County–Mandan Combined Law Enforcement and Corrections Center and turn herself in to the local authorities. Her crime: good, unflinching journalism.

Goodman had the audacity to commit this journalism on September 3, when she was in North Dakota covering what she calls “the standoff at Standing Rock”: the months-long protests by thousands of Native Americans against the Dakota Access Pipeline. The $3.8 billion oil pipeline is slated to carry barrel after barrel of Bakken crude through sacred sites and burial grounds of the Standing Rock Sioux tribe, and tribe members fear it could pollute the Missouri River, the source not only of their water but of millions of others’, should the pipe ever rupture. Their protests, which began in April and ballooned through the summer months, represent the largest mobilization of Native American activists in more than 40 years—and one of the most vital campaigns for environmental justice in perhaps as long.

Goodman’s arrival at the main protest site was significant. At the time, not a single one of the major American broadcast networks (ABC, CBS, NBC) had sent a reporter to cover the Standing Rock mobilization; none had even bothered to mention it on the air. But there was Goodman, standing at the edge of a grassy plain that was in the process of being churned into gullies of dirt, reporting on one of the most significant stories of the day. Clutching a large microphone, she captured the scene as hundreds of protesters tried desperately to stop a crew of bulldozers from tearing up the earth—the earth, they said, that belongs to nobody—only to be confronted by a force of private security contractors wielding attack dogs and pepper spray.

“People have gone through the fence, men, women, and children,” Goodman reported, her voice taut, then rising, louder and more intense. “The bulldozers are still going, and they’re yelling at the men in hard hats. One man in a hard hat threw one of the protesters down…!”

As Goodman narrated, a security contractor, burly in a deep blue shirt, could be seen belly-flopping a man onto the ground. Protesters streamed in to help him, stumbled over mounds of newly churned dirt, faced off with contractors whose faces were hidden behind oversized sunglasses. The scene was full of movement. Overhead, a helicopter hovered, circled, while back on the ground, protesters began to report burning eyes, and dogs—dogs lurching at protesters, dogs straining against their leashes, dogs with mouths open, mouths biting.

“Why are you letting the dog go after the protesters?” Goodman could be heard shouting at a security contractor as a woman screamed in the background. “It’s covered in blood!”

Within hours of the attack, Democracy Now! had turned its footage into a seven-minute video that it released as a web exclusive. Three days later, Goodman followed up with an extensive report—“Dakota Access Pipeline Co. Attacks Native Americans with Dogs and Pepper Spray”—that she broadcast live on her show. The video quickly went viral, pinging across Twitter and Facebook (where it was viewed more than 14 million times) and landing, ultimately, on the same big news stations that, until that moment, hadn’t bothered to cover the protests: CNN, CBS, NBC, NPR.

Goodman’s report created a rare crack in the consensus of silence. And, as Rolling Stone’s Matt Taibbi writes, the outrage it generated may well have influenced the Obama administration’s decision to halt work on the pipeline several days later. This was journalism that mattered.

Yet, on September 8, Goodman received the news that Morton County, North Dakota, had issued a warrant for her arrest. The charge: riot, a misdemeanor punishable by jail time and a fine.

It should be noted that this was not the original charge leveled against Goodman; initially, she was tagged with criminal trespassing, also a misdemeanor. But in what would seem to be a clear sign of charge-shopping, the prosecutor, Ladd Erickson, switched up the crimes she had allegedly committed just days before she was set to appear in court, because, he admitted in an e-mail to Goodman’s lawyer, there were “legal issues with proving the notice of trespassing requirements in the statute.”

When asked to explain the grounds for arresting a working journalist, Erickson told the Grand Forks Herald that he did not, in fact, consider Goodman a journalist. “She’s a protester, basically,” Erickson told the newspaper. “Everything she reported on was from the position of justifying the protest actions.” And in The Bismarck Tribune he later added, “I think she put together a piece to influence the world on her agenda, basically. That’s fine, but it doesn’t immunize her from the laws of her state.”

It’s worth pausing here for a moment to contemplate the full and chilling absurdity of this statement: According to Erickson, a woman who appeared at a protest carrying a microphone emblazoned with the name Democracy Now! and trailing a video crew; who can be heard in the resulting video report identifying herself to a security guard as a reporter; and who then broadcast the video on the daily news program she has hosted for 20 years is not actually a journalist. She is not a journalist, because she harbors a strong perspective, and that perspective clashes with his own. By the same distorted logic, every muckraking news gatherer from Ida Tarbell and Upton Sinclair on through I.F. Stone, and, yes, today’s Matt Taibbi (whose work Erickson apparently admires) was not a journalist but an activist flirting with arrest.

Goodman’s report on the attack on the pipeline protesters created a rare crack in the consensus of silence.

This notion should disturb anyone who labors in the journalism trenches, particularly those who dedicate their days, and often nights, to covering stories that challenge the mighty and prick at the powerful. Engaging in serious journalism—journalism that captures a society’s forbidden, or simply hidden, stories—is hard and scary, and it requires bravery, conviction, and determination, along with an abiding faith in the protective power of the First Amendment. When that faith is compromised, the possibility of serious journalism collapses—a reason, no doubt, the Committee to Protect Journalists came out forcefully on Goodman’s behalf.

“This arrest warrant is a transparent attempt to intimidate reporters from covering protests of significant public interest,” Carlos Lauría, senior program coordinator for the Americas at CPJ, said in a statement. “Authorities in North Dakota should stop embarrassing themselves, drop the charges against Amy Goodman, and ensure that all reporters are free to do their jobs.”

Thus far, the North Dakota authorities remain committed to their own embarrassment; the charges have not been dropped, which is why Goodman is going back to North Dakota to turn herself in—and then fight the charges.

A few weeks back, as I drove with Goodman to and from a memorial service (full disclosure: Goodman is a family friend whom I have known for a long time and once worked for), I overheard an admirer of hers ask what the public could do to support her as she faced arrest. Goodman was quick to respond: keep paying attention to the protesters in North Dakota, keep caring about their fight. She, in other words, was not the story.

Goodman was right, of course. The long struggle of the Standing Rock Sioux, which is a struggle against broken treaties, environmental injustice, and government-sanctioned kleptomania, is older than this country and as essential to its future as it is to its past. Yet, without someone to hold a microphone to the activists’ lips or train a camera on their protests, the story often gets lost. We risk missing the message, uttered by a man with a raw voice and pained face, toward the end of Democracy Now!’s viral video: “No one owns this land. This land belongs to the earth. We are only caretakers. We’re caretakers of the earth.”

Note: This article has been updated to reflect the news that the charges against Goodman were switched from criminal trespassing to riot.

To the Class of 2020: You Deserved Better Than This

The Pandemic Has Sent Child Hunger to Record Levels