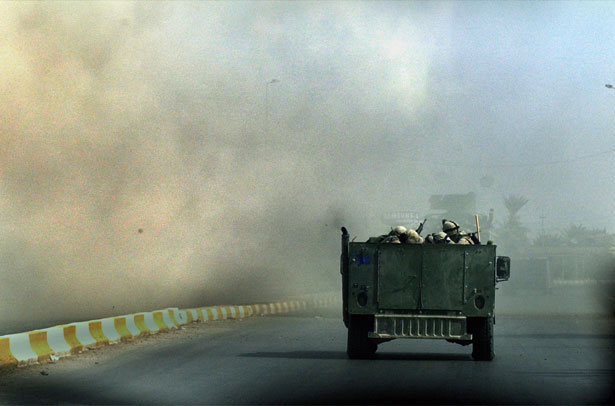 Despite divisions in the US, Americans are unified by one idea: opposition to rejoining the war in Iraq. (AP Photo/Jim MacMillan)

Americans do not want to send ground troops back to Iraq.

Americans really do not want to send ground troops back to Iraq.

A fresh Public Policy Polling survey finds that 74 percent of voters oppose sending troops to the country where in 2003 former Vice President Dick Cheney claimed US troops would be “greeted as liberators”—but where in fact 4,486 Americans were killed, and where even the most cautious estimates put the Iraqi death toll (military and civilian) in the hundreds of thousands.

What it means is that they have a sense of perspective that is lacking among the neoconservative elite that is always so ready for war.

So it is that, while Cheney is busily repurposing his pro-war rhetoric of 1991 and 2003—while at the same time accusing President Obama of “betraying” US freedom, “abandoning” Iraq, being a “very very weak president” and generally failing to follow the neocon playbook—Americans are remembering what happened the last time the war hawks had their way.

In fact, if there is one thing that unites Americans, it is their skepticism about steering back into Iraq.

Eighty-two percent of Democrats oppose sending US troops to Iraq, as do 86 percent of independents. Notably, 57 percent of Republicans are also opposed.

Overall, just 16 percent of Americans are inclined toward the sort of approach that might satisfy Cheney.

Given a choice between President Obama’s relatively cautious response—with its emphasis, so far at least, on regional diplomacy—and the more aggressive approach of the man Obama beat for the presidency in a 2008 campaign that offered a stark choice with regard to foreign policy, 54 percent of those surveyed favored Obama’s way of handling things. Just 28 percent were inclined toward McCain’s hawkish rhetoric.

Of course, it’s more nuanced than that. Obama has already sent a contingent of 275 troops to provide embassy security in Baghdad, and there is talk of sending Special Forces units. Additionally, the prospect of a bombing campaign to support Iraqi forces has been raised.

For instance, there is not majority support for military airstrikes.

According to the survey conducted by PPP for Americans United for Change, 46 percent of likely voters say they could support airstrikes. But 32 percent oppose them, and another 22 percent say they are unsure.

Respecting that skepticism, Congressman John Garamendi, D-California, and Congresswoman Colleen Hanabusa, D-Hawaii, on Wednesday introduced an amendment to the Defense Appropriations Bill that would require the administration to seek the advice and consent of Congress before engaging in any sustained military action in Iraq.

“Before we ever consider sending our brave men and women in uniform back into the Iraq powder keg, we owe it to our servicemembers and to the American people to at least have a frank and public debate in the Halls of Congress,” said Garamendi, a member of the Armed Services Committee.

The amendment would not block moves to increase security at the US Embassy in Baghdad. But it would limit the use of defense funds in Iraq for actions deemed to violate requirements outlined in the War Powers Resolution.

“In 2003, Congress should have resisted the rush to a war of choice with Iraq. I will do everything in my power to prevent us from repeating the mistakes of my predecessors,” announced Garamendi. “I am deeply skeptical of reigniting America’s involvement in Iraq’s civil war, and if my amendment is adopted, we’ll at least ensure a serious debate on the merits of returning to Iraq.”