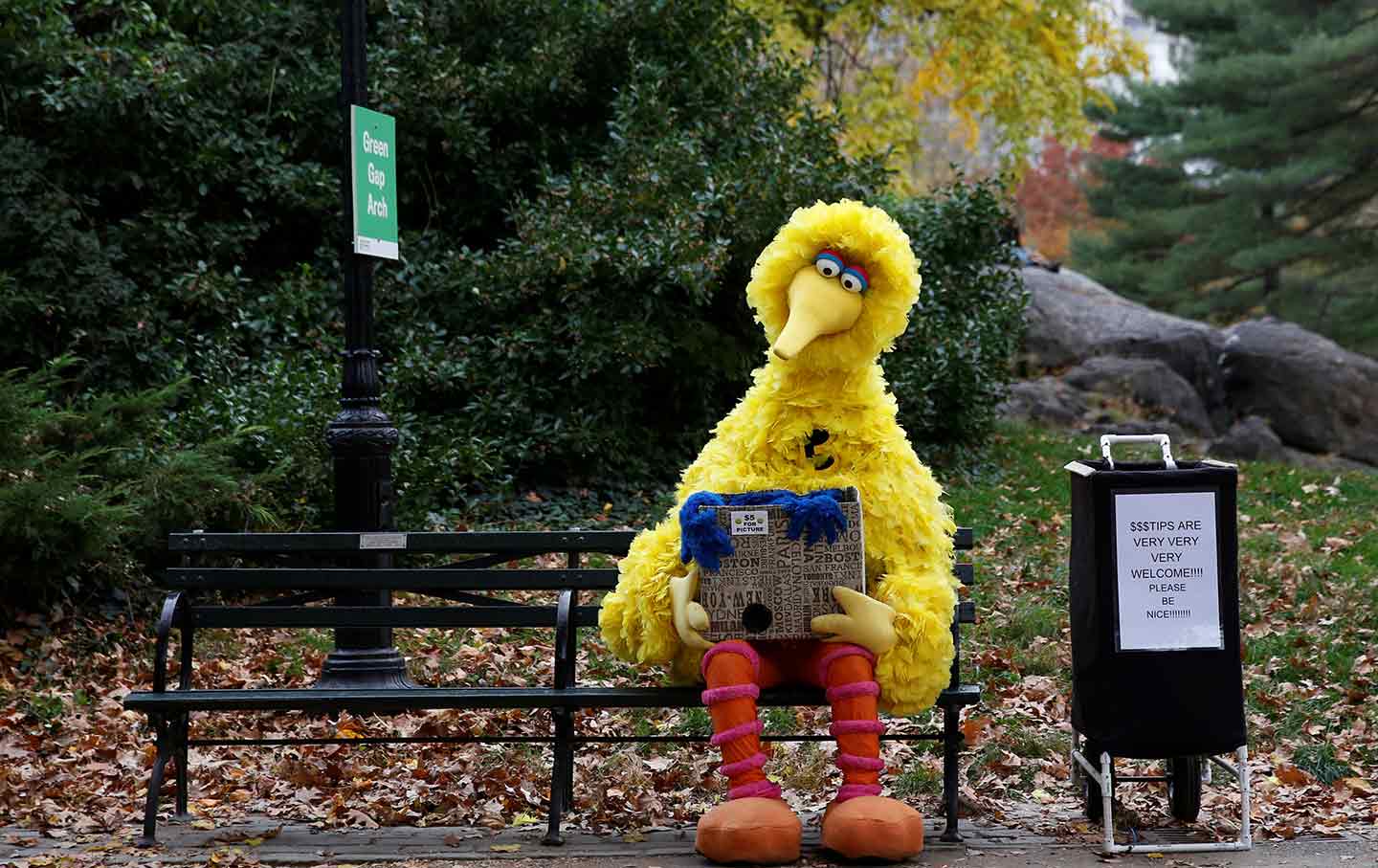 A man dressed as the Sesame Street character Big Bird sits on a bench waiting to take pictures with people walking through Central Park on November 14, 2016. (Reuters / Shannon Stapleton)

Long before it was unveiled, there was little doubt that Donald Trump’s first budget would increase spending on police and the military and slash funding to the arts, scientific research, and environmental protection. Yet the president still managed to surprise with the scope of his proposed cuts. Along with massive reductions in funding for the Environmental Protection Agency, the State Department, the Department of Labor, and other federal agencies, Trump’s budget calls for the elimination of the National Endowment for the Arts, the National Endowment for the Humanities, and the Corporation for Public Broadcasting.

Funding for the NEA, the NEH, and the CPB comes out to just 0.02 percent of the federal budget.

How does this affect you? If you’ve ever attended a free program at your neighborhood library, enjoyed a summer concert at a public park, caught a movie or two at your town’s film festival, read a classic book from the Library of America series, taken a high-school or college humanities course, or watched Sesame Street with your children, chances are that you have the NEA, the NEH, or the CPB to thank for it. Imagine losing all of that overnight.

Public funding for the arts and humanities is a popular target for a particular breed of conservative. Mick Mulvaney, the director of the Office of Management and Budget, argued that the government can’t ask steelworkers and coal miners for money. “Can I really go to those folks, look them in the eye, and say, ‘Look, I want to take money from you and I want to give it to the Corporation for Public Broadcasting’?” Pat Buchanan, the twice-failed presidential candidate, was gleeful about the cuts: “The Lord has been good to me late in life, my friend,” he told an interviewer. And Fox News personality Tucker Carlson foolishly declared, “The NEA is, in effect, welfare for rich liberal elites. That’s who consumes the products that they produce.”

To hear these guys tell it, you’d think funding for the arts was hobbling the federal budget by taking money from coal miners and using it to pay for artists to sunbathe in Cancún. In reality, 40 percent of funds from the NEA go directly to states to finance arts programs, particularly in rural areas that don’t have a robust arts infrastructure. Furthermore, the combined budget for the NEA and the NEH is under $300 million per year. That’s 0.008 percent of the federal budget. If you add in the CPB, which gets another $445 million annually, the cost is still under 0.02 percent of the total budget—a pittance, especially compared with what nations like Germany or Sweden spend. France recently increased the budget of its Ministry of Culture to $3.2 billion. (Yes, billion with a “b.”)

The F-35 fighter-jet program will cost $1.5 trillion. Why is there money for failed defense programs like this—and not for the arts?

The simple truth is that cutting the NEA and the NEH will do nothing to help balance the budget, although it will severely affect states that depend on these agencies to fund cultural or educational programs. Often, it is through such programs that children from poor or underserved communities get access to arts or music education, which in turn boosts school performance. And that includes the children of the coal miners and steelworkers that Mulvaney claims to care about so much.

The federal budget is a reflection of an administration’s policies and priorities, so it is useful to look at how money that might be cut from the arts and humanities would otherwise be allocated. Consider the F-35, a fighter jet developed for the government by Lockheed Martin, at a cost of $102 million to $132 million per plane. That staggering cost might be acceptable if the F-35 proved to be successful, but almost from the start it has been plagued with serious safety and performance problems. The entire F-35 program will end up costing taxpayers $1.5 trillion. Why is it that we can always find money for defense projects like these, which have failed to meet their goals, but not for arts programs that have a proven track record?

Or take a look at the president’s extravagant spending on travel. He flies frequently to his resort in Mar-a-Lago, where he golfs and dines with dignitaries, celebrities, and members of his private club. The Washington Post reported that Trump’s trips to the resort have cost taxpayers as much in one month as the Obamas’ trips averaged in one year. Are we expected to continue to pay for the president’s extravagant lifestyle by cutting poor or underserved communities’ access to arts and the humanities?

Not only are these programs beneficial to communities and private citizens; they also often result in huge financial benefits for states. It was with a grant from the National Endowment for the Arts that Robert Redford launched the Sundance Institute for independent filmmakers in 1981. Over the past 36 years, the institute and its associated film festival have generated millions of dollars in revenue for hotels, restaurants, and other businesses in Utah.

Look, I’m not an unbiased party to this debate. Arts funding matters a great deal to me. In 2006, for instance, I received a grant from the Oregon Institute of Literary Arts that was partly funded by the NEA. It was a grant of $1,300, which I used to pay for child care so that I could work on my second book, Secret Son. I’ve also taken part in panel discussions sponsored by Oregon Humanities and Nevada Humanities, both of them funded by the NEH. The University of California, Riverside, where I teach, has received fellowships from the NEA and the NEH, which have been used to fund projects like cataloging and preserving Southern California newspapers, developing a humanities curriculum for the School of Medicine to help doctors communicate better with patients, and using facial-recognition software to identify unknown subjects in portrait art.

The arts and the humanities are not partisan. You don’t need to be a Democrat or a Republican to enjoy them. Nor are they a luxury. They are essential to our lives, enabling us to connect with one another and enriching the range of our critical conversations. In the Trump era, we need them more than ever.