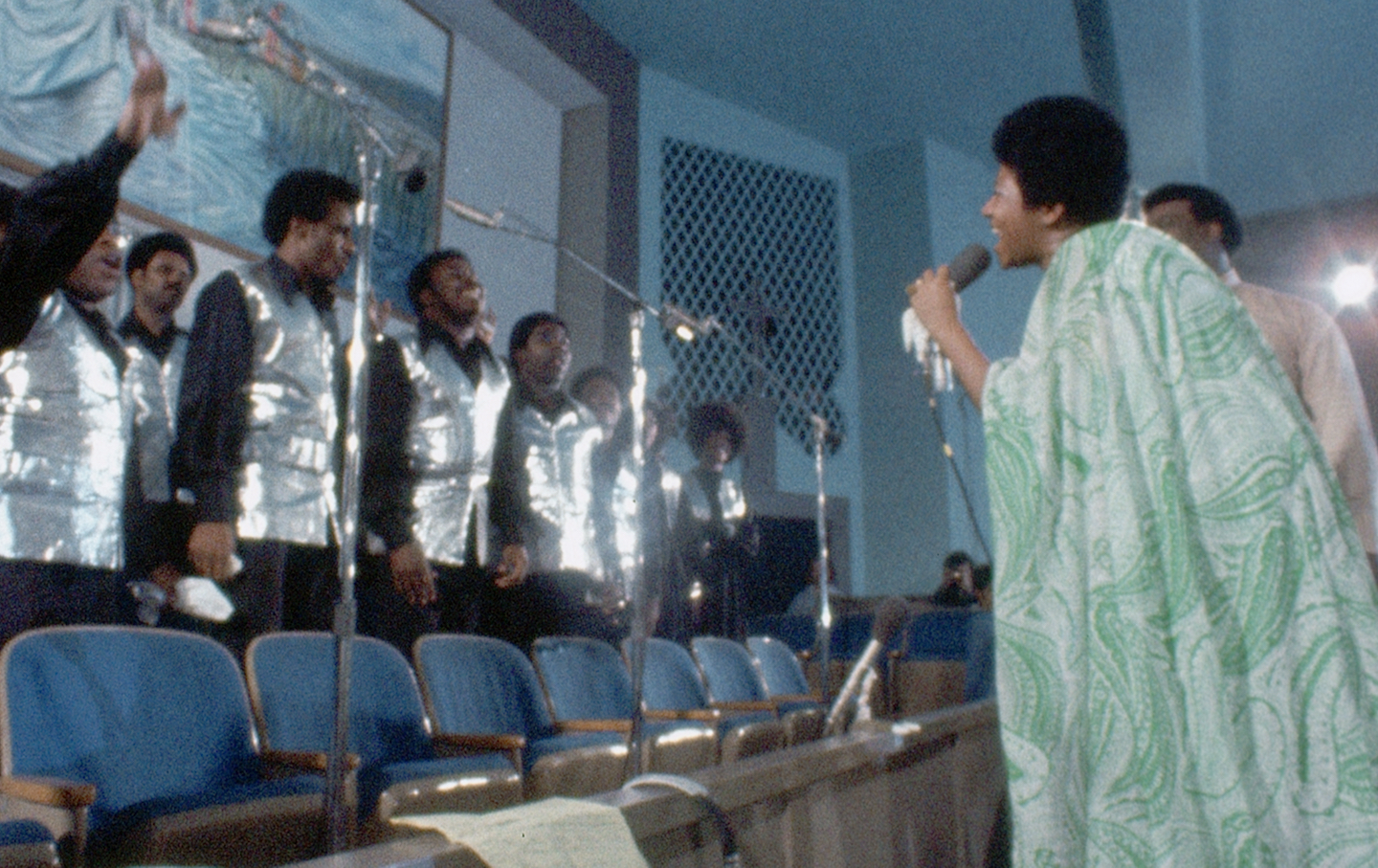 A still from Amazing Grace. (Courtesy of NEON)

Decades after a team of filmmakers captured the sounds and sights of two evenings of worship at a Baptist church in Los Angeles—decades after those services yielded a double album that became the best-selling record of Aretha Franklin’s career—the documentary Amazing Grace has been completed and released into theaters. Surely the first and most overwhelming emotion that ought to be felt by anyone with ears in working order—ears, and a heart—is gratitude.

Franklin, the voice of the century, was 29 years old on those January evenings in 1972 and was returning to the roots of her music, not alone but in the midst of fellowship. With her were her lifelong friend the Reverend James Cleveland, the Southern California Community Choir, a handful of her regular studio musicians, and an invited congregation. Despite the commercial trappings of the event—and it must be said, at once, that commerce is no stranger to the church—the film delivers Franklin at the height of her powers, as the leading celebrant of a communal outpouring. Which is to say, Amazing Grace is Franklin and a living tradition united, Franklin borne aloft on the wings of saints, exponential Franklin.

Here’s some of what was inaccessible on the record album, and which you can now see:

Members of the choir rising here and there at the sound of her voice, like scattered, irrepressible shoots in early spring.

The pummeling legs of congregants who have released themselves from the pews and dance out their exultation.

James Cleveland handing off the piano midway through “Amazing Grace” so he can sit to the side, bury his face in his hands, and sob.

The shimmer on Franklin’s face, which glistens with light reflected off of her sequined gown and the sweat of inspiration.

Add the experience of awe to that first, natural response of gratitude. The people who gathered at the New Temple Missionary Baptist Church in January 1972—some of them, anyway—were united in the belief that God works wondrously among us. They had this music as evidence. You, moviegoer, have Amazing Grace; impart the credit however you will.

Then, having felt gratitude and awe, you can proceed to the more troubling emotions.

Sitting in a front pew on the second night, in all his manicured, pomaded, electric-blue-suited glory, was Franklin’s father, the Reverend C.L. Franklin, accompanied by his longtime lover, the renowned gospel singer Clara Ward. Let me not hesitate to give C.L. Franklin his due: He was a favorite preacher of the Rev. Martin Luther King Jr., and one of his close associates. He was also the man who made his daughter a soloist in his church when she had just turned 10, took her on the road starting when she was 11, and produced her first recording, “Never Grow Old,” when she was 14, a year after she gave birth to her first child. Now, under her father’s eyes, Aretha Franklin leaves the pulpit (where she has performed for most of the two evenings), sits at the piano, and returns to that first number of her recording career, giving it perhaps the deepest and most stirring performance of the entire event. You needn’t have read anything about her life to see that she’s singing “Never Grow Old” for her father, that she’s taken on the demeanor of an obedient and perhaps frightened child, that she’s weeping.

How to go on? I can tell you, again, why it’s a mistake to watch Amazing Grace without regard to its communal religious meaning, as if it were essentially the document of an aesthetic coup—like the video of Renée Fleming’s Covent Garden La Traviata, let’s say. I am not qualified, though, to discuss the implications of Franklin’s relationship with her father and her church. Fortunately, I know of someone who had the credentials.

James Baldwin, The Fire Next Time:

Being in the pulpit was like being in the theatre; I was behind the scenes and knew how the illusion was worked…. I knew how to work on a congregation until the last dime was surrendered—it was not very hard to do—and I knew where the money for ‘the Lord’s work’ went…. I don’t refer merely to the glaring fact that the minister eventually acquires houses and Cadillacs while the faithful continue to scrub floors and drop their dimes and quarters and dollars into the plate. I really mean that there was no love in the church. It was a mask for hatred and self-hatred and despair…. the passion with which we loved the Lord was a measure of how deeply we feared and distrusted and, in the end, hated almost all strangers, always, and avoided and despised ourselves.

It is possible to be profoundly moved by Franklin’s performance of “Never Grow Old” while recognizing that it’s both an expression of religious devotion and a show-business star turn. It is possible to respect the Rev. C.L. Franklin for his very real attainments and yet notice that when he’s invited into the pulpit in Amazing Grace, he does not praise God but only his daughter’s success (which is to say, his own). It is necessary to note that she scarcely says a word on either evening. The thought that rises inescapably is that you are watching a kind of cover-up: that Aretha Franklin, rather than Jesus, must be lauded again and again during these evenings because the triumphant, commanding woman before you remains, in some way, an abused young girl.

“There was no love in the church.” For the most part, the reviews and articles I’ve read about Amazing Grace have preferred to dwell on gratitude and awe and avoid this devastating thought. Perhaps that’s because most of the people who write about movies are not committed Christians and can content themselves with the outward musical experience. Perhaps it’s because so few people of any description, even today, are willing to look for more than a moment at the realities that Baldwin confronted so steadily.

He confronted them; but in his complexity and honesty, he did not dismiss them, or what he’d received from the church. “In spite of everything,” he wrote, “there was in the life I fled a zest and a joy and a capacity for facing and surviving disaster that are very moving and very rare.” And though he told everyone he’d fled the church, he also insisted on showing that it hadn’t left him. He posted the evidence at the beginning and end of The Fire Next Time, in words he chose from the old gospel songs.

I wonder what he would have made of Amazing Grace if he’d lived to see it brought into the light, so many years after the event. The zest, joy, and capacity for facing and surviving disaster are certainly there, in abundance. So, too, is the bad faith. But for those who care to nurture hope, the film also suggests that perhaps Baldwin’s harshest judgment on the church need not be final. Nine years after The Fire Next Time, a community came together around Franklin not in self-hatred and self-avoidance but with manifest pride. You can see it in the way the congregants claim their right to be seen by the cameras. (This is show business in which everybody’s on show.) You can hear it in the open boasts of having won both God’s prize of salvation and America’s prize of money. As another crossover gospel artist, Sam Cooke, had sung, “A change is gonna come.” Look back at Amazing Grace, and you perceive that it already had.

I have so often questioned the notion that films can improve the world—all right, I’ve so often made fun of the idea—that I have a duty to mention The Silence of Others. Produced and directed by Almudena Carracedo and Robert Bahar and released under the auspices of Pedro Almodóvar, it’s a legal thriller of sorts, and all true.

The Silence of Others follows the efforts of a group of activists—a small nucleus at first, then hundreds—as they struggle to work around, and then overturn, Spain’s 1977 amnesty law, known as the Pact of Forgetting, which has made it impossible to prosecute former members of the Franco regime for their crimes. Because of the law, there has been no truth and reconciliation process in Spain, as in other countries that emerged from fascism. This film is the years-long story of people who are resolved to bring torturers to justice, exhume parents from unmarked mass graves, find the records of infants who were stolen from them.

The Silence of Others is clear-eyed, clear-headed, and artful without advertising its own skill. It has made a difference in the world. It was named Best Documentary at the 2019 Goya Awards and to date has been seen in Spain by more than a million people. It is now being seen in the US, too, starting with a theatrical run at Film Forum in New York.