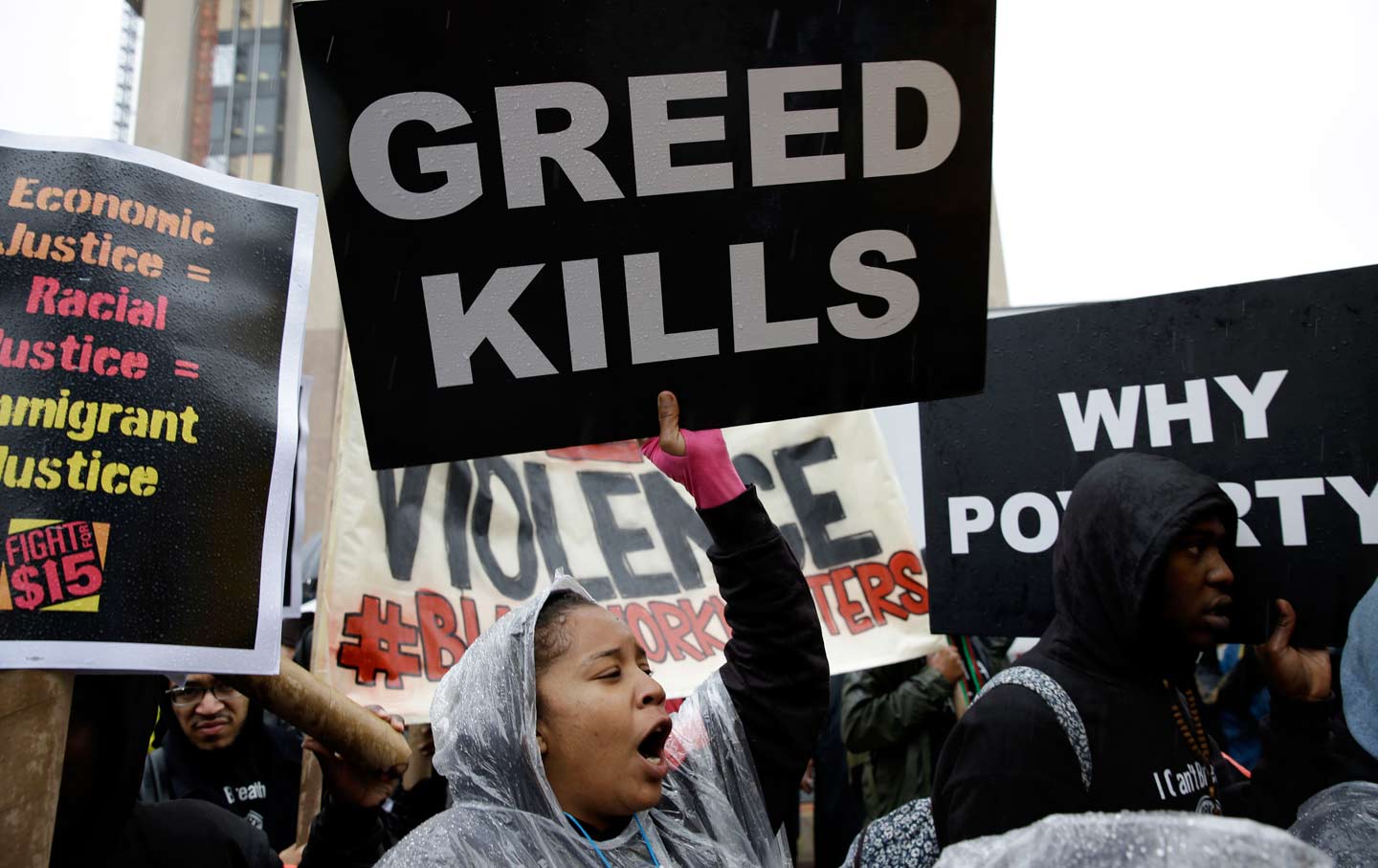 We’ve come a long way since that crisp November day three years ago when a small group of New York City fast-food workers launched a strike with the slogan “Fast Food Forward.” Today, the movement continues its forward march with the viral hashtag #FightFor15. On November 10, workers in hundreds of cities again went on strike and rallied, this time with an especially militant overtone, timed to launch a year-long campaign to foreground low-wage workers’ issues in the elections.

Tuesday’s protests, supported chiefly by the SEIU with backing from an array of community and labor groups, showed how many methods of raising wages have made gains—through legislation, voter referenda, grassroots labor pressure—or even administrative intervention, such as New York’s Governor Cuomo’s two major executive-led wage hikes.

But more importantly, the efforts reveal why none of these measures add up yet to structural economic change.

In Seattle and Los Angeles, which got to $15 wages by legislation, and San Francisco, which voted for a raise via ballot initiative, municipalities face new challenges in labor enforcement in sectors that have traditionally had little oversight. On the upside, as other cities lean toward $15 an hour, concurrent local policy discussions have emerged around systemic worker empowerment, such as proposals for fair scheduling and paid sick days to improve workers’ overall economic stability.

And the executive actions in New York—along with new collective-bargaining agreements raising wages for home health aides in Massachusetts and Oregon—show grassroots pressure can spur reforms through administrative measures that might otherwise stagnate in legislatures. Governor Cuomo’s new executive action will boost wages for about 10,000 workers in state government offices and executive agencies. The move may serve as a prelude to Cuomo’s push for statewide legislation that will vie with a similar initiative in California for the first statewide $15 wage floor (a refreshing upward competition, after years of employers racing to the bottom in wages and labor standards).

But the Fight for $15 has so far probably done more to shed light on the crisis of economic inequality than it has to actually improve wages directly on a wide scale. New research shows much more than wage hikes is needed to build a sustainable jobs for low-wage workers.

According to the think tank National Employment Law Project, over four in 10 workers nationwide earn less than $15 per hour. Food services have the greatest percentage of ultra-low-wage earners of any industry, with a whopping 96 percent of fast-food workers earning sub-$15 wages. About 3 million cashiers and 2 million retail sales people—a large chunk working for some of the world’s most lucrative chains—currently earn less than $15 an hour. That wage is roughly the bare minimum needed to live decently anywhere in the country.

But more disturbingly, low wages are a symptom of more systemic, structural oppression across the labor force. Ultimately, while policies to raise hourly pay have drawn populist energy, they will not directly improve the lot of workers stuck in the informal economy, undocumented laborers, people who are part-time and erratically employed, or those trapped in jobs where wage theft and overtime violations are rife.

The New York wage board’s fast-track raise for fast-food workers is limited as well. A careful analysis by the Century Foundation found that—in contrast with rosier projections by the governor’s office—the $15 wage floor is structured so narrowly it reaches just a tiny fraction of low-wage New Yorkers; the estimated 94,000 fast food–chain workers covered by the wage standard represent “just 3 percent of its sub-$15 workforce, and a scant 1.2 percent of its overall workforce.”

Incremental victories aside, the concrete effect of the Fight for $15 is more subtle, equipping many workers with the organizing tools to push their own agenda, which now touches on social-justice issues beyond wages.

The other goal of the labor campaign, unionization, remains a distant prospect for poor workers. Despite some victories before the National Labor Relations Board that ease restrictions on organizing, unions are still hugely impeded by outsourcing and casualization of low-wage jobs and corporate deregulation.

And the intensifying political debate over wage inequality opens another debate around the disproportionate impoverishment of black and Latino workers. Rahel Mekdim Teka of the Black Youth Project 100, described the racial overtones of the crisis at Tuesday’s Fight for 15 rally in downtown Manhattan.

“I know and have witnessed firsthand that low wages are a form of violence,” she said. In marginalized communities, “how can we grow and how can we dream of a better future, if we’re working full time and unable to make ends meet, unable to provide for our children, and unable to pay rent?”

The gender dimension of the Fight for 15 is also instructive for the labor movement. It’s no coincidence much of the mobilization comes from two woman-dominated occupations: childcare workers and home health aides, nearly 90 percent of whom make under $15 per hour. They’re joining the fight to call attention to the overlooked value of their work as caregivers—a side of the economy that needs to be uplifted for consumers and providers, to foster community stability across generations.

As Atlanta childcare worker Dawn O’Neal explained ahead of Tuesday’s protests, their fight is not just for economic survival but for solutions to the inequality dividing communities. She’s observed how affluent communities that she’s encountered as an educator are self-sufficient and able to provide the safe, stable households and healthy neighborhoods that aren’t accessible to families like hers, “They’re able to give back,” she told The Nation. “But here we are, and we’re struggling.… we can’t afford to take care of ourselves, let alone put anything back into our own community.” With so many working parents depending on public benefits, “there’s no reason for us to be working 40 to 60 hours a week and have to go back to the government and say, ‘We need this.’”

So now the Fight for $15 isn’t telling politicians what they need, but what their families deserve and demand. By tying workers’ economic aspirations to the horizon of political change, they proclaim that the fight is not about the money: It’s about the dignity of earning, and of giving, their fair share.