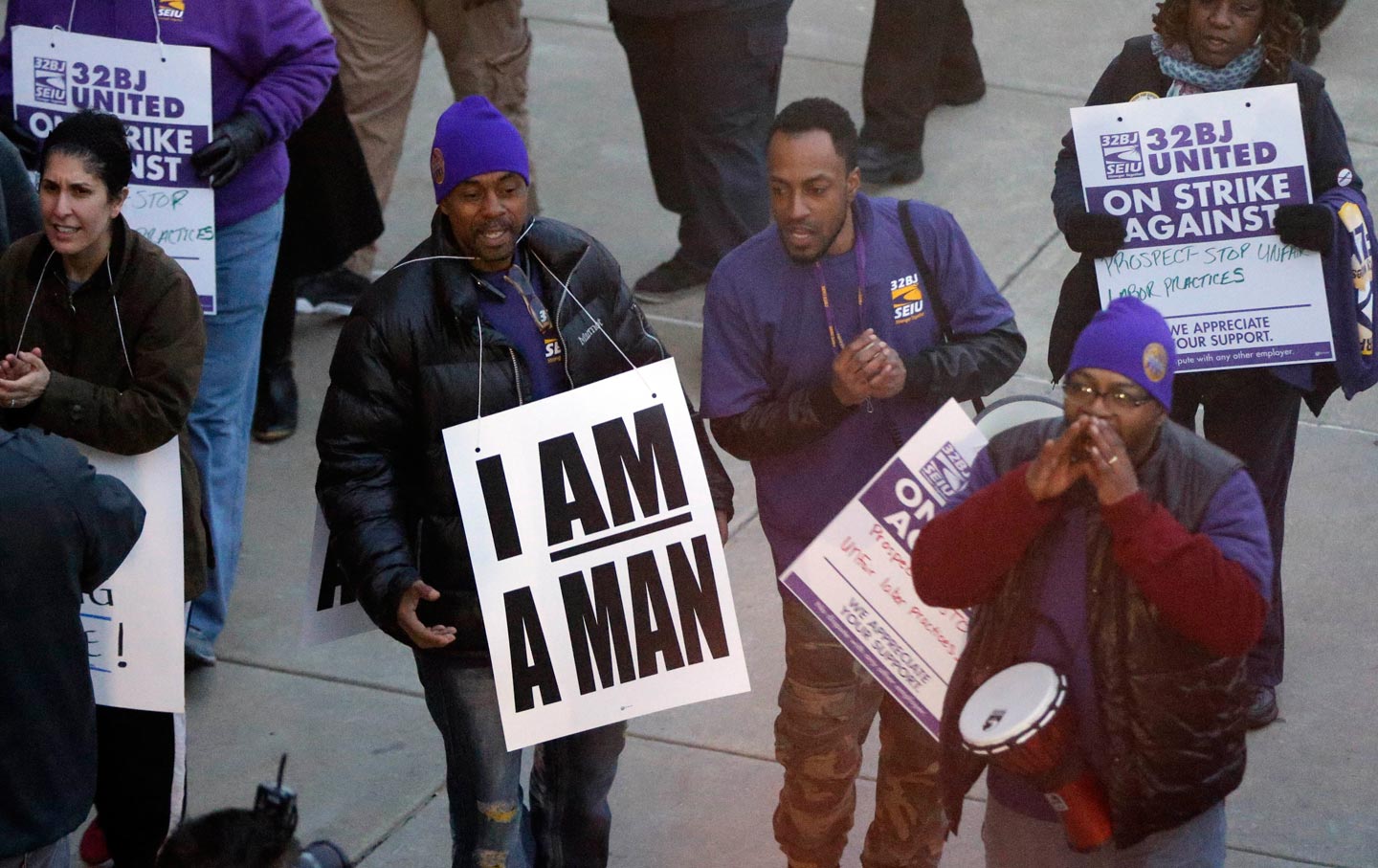 UPDATE: On Friday evening, the airport workers who voted for a strike reached a tentative deal with American Airlines. Though the plan has yet to be finalized, the union reports American has agreed to provide subcontracted workers “a fair process to form their union.”

The election buzz hovers over Philadelphia ahead of the Democratic National Convention, but for the workers greeting the delegates as they arrive at the Philadelphia International Airport, the important ballot has already been cast: They just voted overwhelmingly to authorize a strike during the event.

The workers hope to steal some of the national spotlight on the convention hall by threatening a strike as they push for fair wages and union contracts, backed by SEIU’s nationwide airport-organizing campaign. In threatening to disrupt the convention, they’re rupturing a business model built on the exploitation of the city’s black working class.

The workers and organizers are pushing back against the airline industry’s structural shift since the 1990s, away from solid unionized jobs—which are now concentrated in aviation professions like flight attendant—toward subcontracted precarious work controlled by third-party vendors rather than the airlines.

“The airport industry is another example of…a model that’s based on having large employers compete with each other to pay and to treat people as poorly as possible,” 32BJ Vice President Gabe Morgan tells The Nation. “And in return for doing that, they are awarded contracts by other big employers.” By rallying for $15 and union rights, “what workers have started doing is questioning that system and saying…I deserve to be treated like a human being.”

A 2013 survey by Urban League and National Employment Law Project showed that more than 95 percent of airport workers lived in predominantly Latino or black communities—reflecting trends of racial and economic segregation. The city’s black population, both US-born and immigrants, suffers roughly double the joblessness rate of whites. The airport workforce, meanwhile, represents the flip-side of the problem: working poverty. With many workers juggling more than one job to get by, Morgan says, “It’s not like African-American workers aren’t working. This is 1,000 jobs that people work really hard at every day.”

On Tuesday, hundreds walked off the job to join a mass street protest, rallying under a banner demanding, “Respect Black Workers.”

The newly minted DNC platform, meanwhile, pledges to “make it easier for workers, public and private, to exercise their right to organize, and join unions,” noting that the middle-class has eroded “because the rights of workers to bargain collectively for better wages and benefits have been under attack at all levels.”

The week’s ongoing protests by Philadelphia’s airport workers, like other airport workers nationwide, represent an urban economy rife with segregation, and their struggle to uplift their working conditions face what the union calls systematic union-busting by “low-road” employers.

According to a National Labor Relations Board complaint filed this week, subcontractor PrimeFlight Aviation Services, responding to organizing efforts, “coerced employees” by “informing employees that supporting [the union] would be futile for improving” their working conditions. Primeflight, alongside Prospect Air, even pressured them by offering promotions or bonuses in exchange for refraining from joining the strike. But the companies, which did not respond to requests for comment, ultimately failed to buy workers’ loyalty.

PrimeFlight baggage handler Charles “Preach” Jones stated in the announcement of the strike vote, “We’ve tried to make our voice heard, but our employers always find new ways to silence us with bullying and intimidation. It is time for us to have a union so that we can be treated with respect.”

The PrimeFlight workers join about 70,000 workers nationwide who have been mobilized through SEIU’s airport organizing efforts. A recent breakthrough came with the unionization of about 7,000 baggage handlers, security officers, custodial workers, customer service agents, and other subcontractor service workers in New York and New Jersey airports.

Outside of formal unionization, 32BJ has pushed pro-labor policies through city government, including a landmark measure in 2014 providing airport workers a $12 minimum hourly wage, and a ballot measure for workers to earn paid sick days based cumulative hours worked. The reforms follow other citywide living wage policies aimed at improving the working conditions of subcontracted airport labor since the late 1990s, including airports in Los Angeles, Miami, San Francisco, and Syracuse.

But workers have protested that the airport subcontractors are heel-dragging on implementation of the new policies. Only after mass protests last year did the companies begin fully implementing the new base wage. And the current battle for a further wage hike to $15 an hour also includes a more comprehensive paid-sick-day policy. Organizers say that bosses have repeatedly denied workers their entitled leave time by undercounting their hours, and sometimes disciplining workers for requesting leave.

The strike vote presents a vindication and a challenge to what the DNC calls its “most progressive platform” yet. Though it is largely an aspirational document, the final draft reflects the core demands of the Fight for 15 movement, which was spearheaded by the SEIU three years ago.

As the campaign circles back to Philadelphia, Morgan says, “Fifteen dollars and a union is part of the DNC platform. We think that the issues these workers are fighting for is exactly what this convention will be about.” What was once dismissed as an activist pipe dream is, at least on paper, imprinted on the mainstream progressive agenda, he adds, “because it addresses the core need that people have in this country…to be able to do work and provide for your family. If, through work, you cannot provide for yourself or your family then you cannot have a democracy.”

Whether or not they strike next week, the airport workers have proven they’re bent on holding politicians accountable to their campaign promises, just as they’re holding their bosses to the letter of the law. Conventions come and go, but the workers turning the tarmac into labor’s new battlefront will keep standing their ground well after politicians fly home.